The thing about being married to a nine-year-old-boy who’s trapped in the body of a 34-year-old man is this: you are the only one that really knows him. 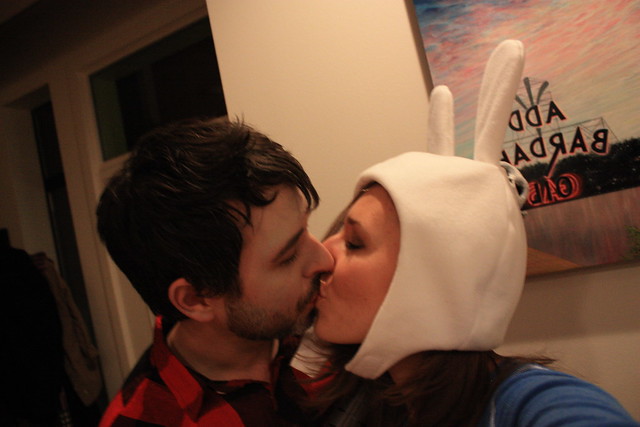 See, he’s done a pretty good job concealing the fact that, at heart, he’s still nine-years-old. He’s been hiding it from everyone for the past (counts on fingers …) TWENTY-FIVE YEARS. There are people who he sees, each and every day, who have no clue. To them, he’s Rand FancyPants-Does-Something-With-Computers-Maybe (?? note to self: find out what husband does for work).

But you know the truth. That there are nights, when, tired from work, he just wants to curl up on the couch, maybe with a mug of hot cocoa, and watch TV.

Sometimes, he even gets to. Those are pretty good nights. 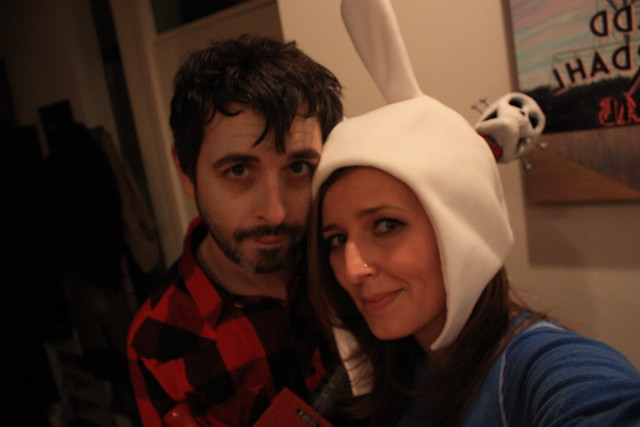 This was a pretty good night, too.

After a particularly rough day, there might be freshly baked cookies added to the mix. And we might swap out cocoa for a glass of whiskey (which is okay, because technically he is old enough to drink. Technically.) And then we’ll turn on the television and sit there for, hopefully, at least an hour. Maybe even two.

For Rand, good days and rough days seem to end the same way: with an episode of Adventure Time. His obsession with the quirky little cartoon started roughly a year ago. We were walking with a friend who started singing a funny little song. I asked her about it, and she explained that it was from the show. A few weeks later, Rand and I decided to watch an episode.

It was one of the weirder things either of us had ever seen. It wasn’t stupid or non-sensical. There were clearly rules to the Adventure Time universe; we just didn’t understand what they were. So we watched a few more episodes. And a few more. And soon enough, we were hooked.

The story of the last human on earth – a 13-year-old-boy named Finn- and his best friend, a shape-changing yellow dog named Jake? Sure. A sentient video game console that wants nothing more than to be human? Okay. A land populated by dozens of strange little kingdoms, each with its own princess? Fine.

Bubblegum Princess. Slime Princess. Hot Dog Princess. We accepted all of it.

The show is strange and complicated and lovable. Take the Ice King, a villain so pitiful and sympathetic, it’s hard to reconcile that he’s on a cartoon. Before the “mushroom war” (a veiled reference to a nuclear war that destroyed most of life on earth), the Ice King was a mild-mannered antiquarian named Simon Petrikov. At some point in his career, he came into possession of a strange artifact – an old crown that he purchased from a dockworker. The crown imbued him with magic powers that enabled him to survive the war (and protect little Marceline, who was 7-years-old at the time), but it also drove him mad.

So now he’s crazy, but he’s also crazy lonely, so he kidnaps princesses in hopes of marrying them.

I mean, are you kidding me? Shakespearean villains often don’t have such depth. AND THIS IS ON A CHILDREN’S SHOW. But perhaps that’s the point, because who better than children to learn the lesson that Ice King embodies – that life is not black and white. That people can’t be divided into “good” or “bad” categories easily.

The King of Mars. Magic Man. Peppermint Butler. A giant, dim-witted brown lump of pastry named Cinnamon Bun. Characters that seem silly and strange at first blush. And the situations they find themselves in are positively ludicrous (engaging Death in a music battle? Yup. That happened.) But as you watch, it becomes clear: Adventure Time takes place in a world that is radically different from ours, but the problems addressed are familiar ones.

It’s a kid show, and then again, it isn’t. Maybe that’s why Rand likes it. Because he’s a kid. But then again, he isn’t.

So this year, when I asked him for Halloween costume ideas, I wasn’t at all surprised when he mentioned Adventure Time. Though I was sort of taken aback when he said that he wanted to be Marshall Lee, The Vampire King.

I mean, Marshall Lee’s not even part of the regular canon. He’s an ancillary character that appears in – I’m not even kidding here – fan fiction that the Ice King wrote.

HE IS A CHARACTER THAT ONLY EXISTS IN THE FAN FICTION OF ANOTHER CHARACTER.

That’s … that’s pure madness, right? But he was so darn excited about it, and I have trouble saying no to that stupid adorable face of his. The only logical costume choice for me was to be Fionna, who is the fan-fiction-female-version of Finn and …

Sigh. You know what? Explaining all of this is hurting my brain. We were cartoon characters for Halloween this year. Here’s what the characters look like: 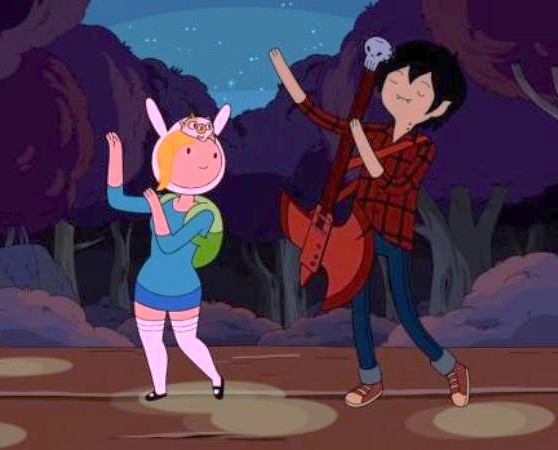 Now, compared to what we’ve done in the past few years for Halloween, this looked like a total breeze. Three years ago, I hand dyed a dress and did a lot of sewing to create our Star Trek (the original series) uniforms. Two years ago, I did an equal amount of sewing (and dyeing) to create my Margot Tennenbaum dress and Rand’s Steve Zissou costume.

Last year, I vowed to not do any more clothes dyeing, because I was tired of having blue hands for half of October. So I just ended up sewing. A LOT. The result was our Moonrise Kingdom costumes.

So upon seeing Fionna and Marshall Lee’s outfits, I was pretty confident that I could pull this off rather easily. I vowed not to do any dyeing, and perhaps no sewing, either, if I could help it.

And I’m pleased to say that I stuck to that.

Of course, I did end up spray-painting and hot-glueing and sanding a lot of things. Sigh. One day, I will buy a pre-packaged costume, I swear. And it will be awful and expensive and so, so easy. Mark my words, it will happen.

But not this year.

I ended up finding most of what I needed for my costume at either our local thrift store, or in my closet (I did go so far as to buy Fionna’s hat on Etsy).  I had to purchase a few things for Rand, but most of it is stuff he can wear again and again.

Phew! Easy. I was done, right? Not quite.

“Where can I get an ax guitar?” Rand asked me, a few weeks before Halloween.

“Marshall Lee has an ax guitar. I need one. It’s cool, I’ll just buy one online.”

Um, noooo. That is not how we operate in our house, Mr. Fishkin. We do not buy ax guitars. We make them. And so I did. I found a paper skull at the craft store … 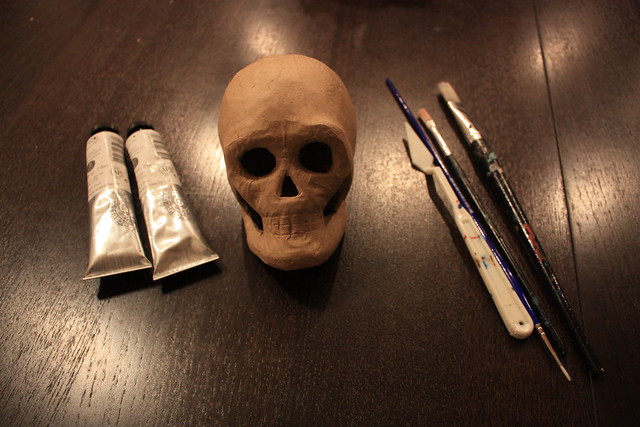 And I painted it. 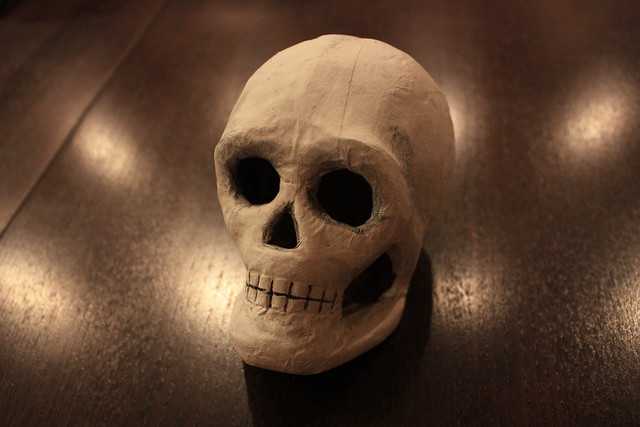 Then I took a plastic toy ax that had the right silhouette, and spray-painted it, along with some foam that I had cut and shaped accordingly. 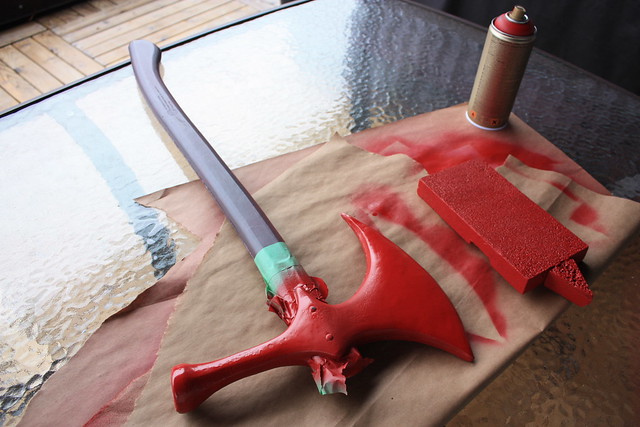 There were a lot more steps in between these and the finished product, but I didn’t take photos (possibly because my finger tips were hot-glued together). The end result was this: 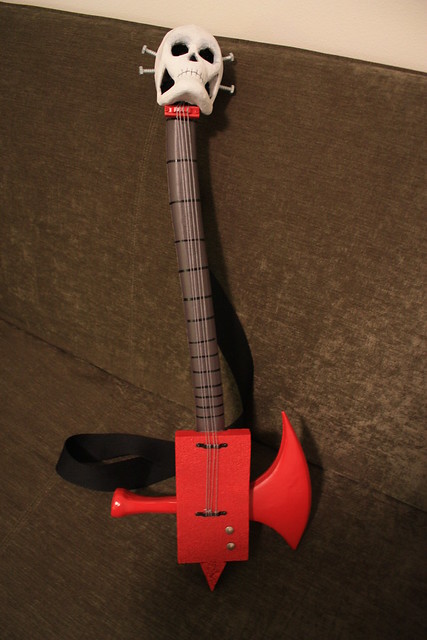 And since he said I needed one, I spray-painted myself a pink sword like Fionna has (and I made one for my friend’s six-year-old daughter … who had the same costume as I did this year. Let us not think too hard on that point). 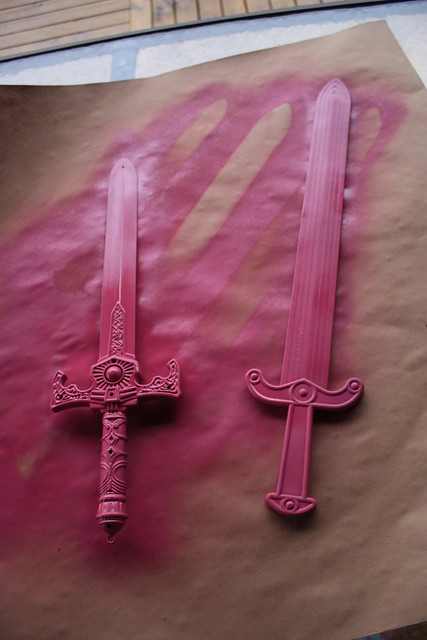 So the only sewing I had to do this year was on Fionna’s backpack. Conveniently, I found this purse at the thrift store. It was the perfect shade of green. The first thing I did was remove the googly eyes from the front … 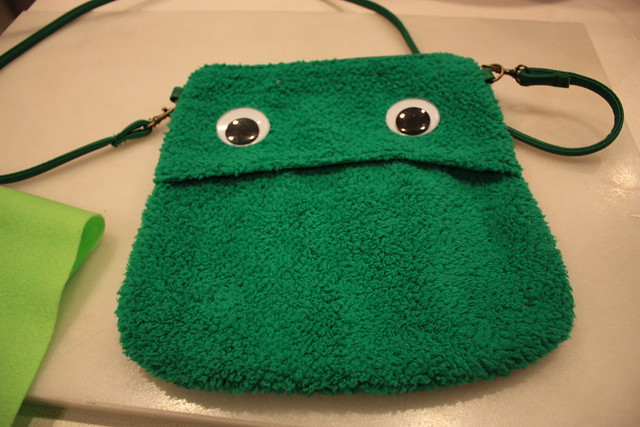 And immediately spent twenty minutes trying to take a selfie pic while wearing them: 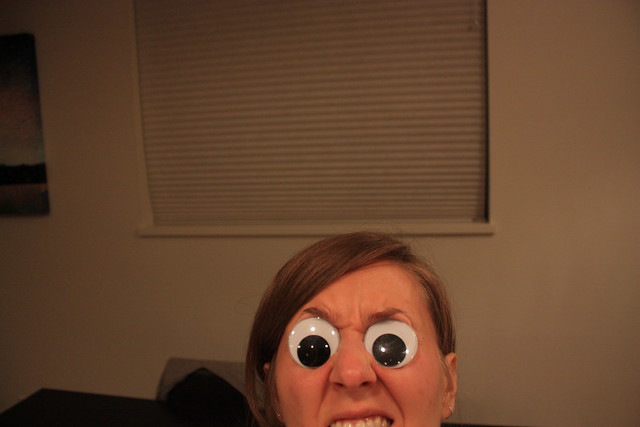 Sometimes I think maybe I need a job.

Then I sewed on a green patch and button, so it would match Fionna’s bag. 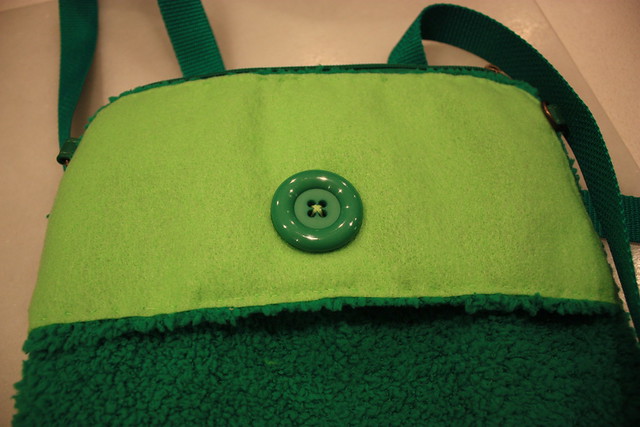 I added a few straps … 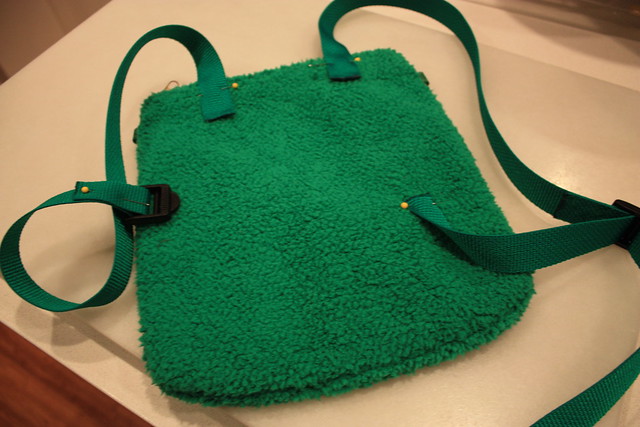 And boom! It was finished: 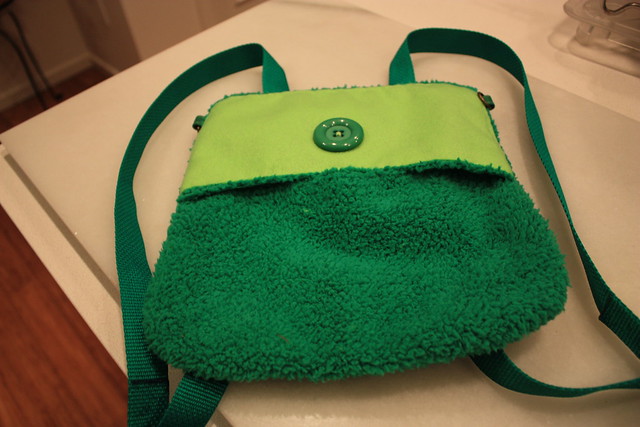 Honestly, compared to past years, it was actually kind of easy. And I didn’t have blue hands.

Ready to see the end result of all this dorkery? Here it is: 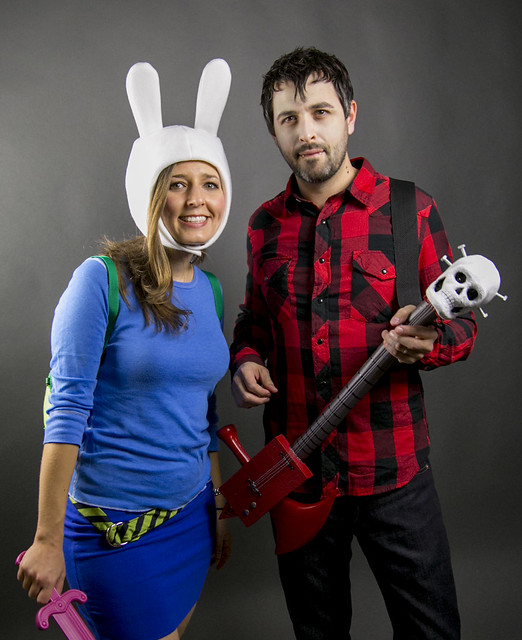 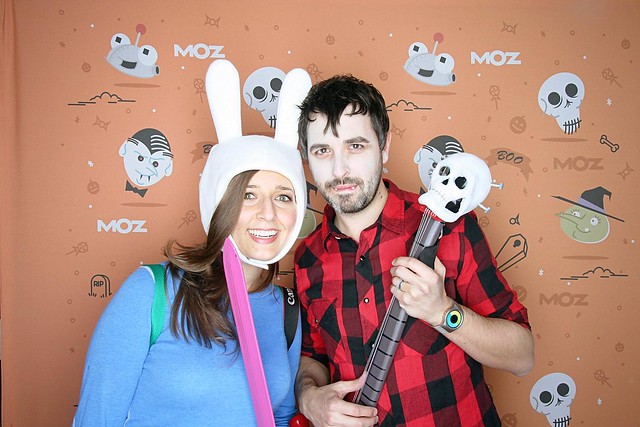 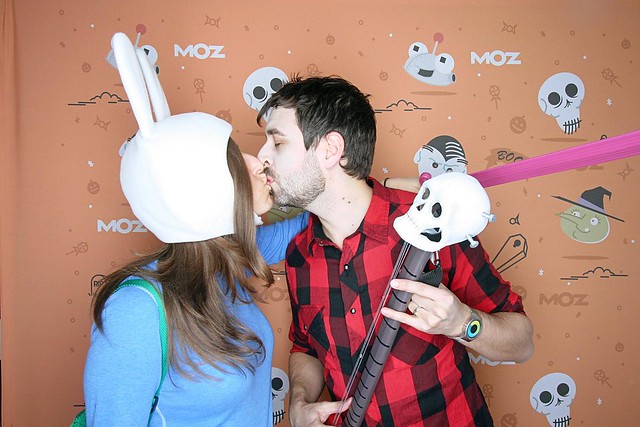 I know. It’s ridiculous. Adults probably shouldn’t spent this much time on Halloween costumes, right? And we are adults. 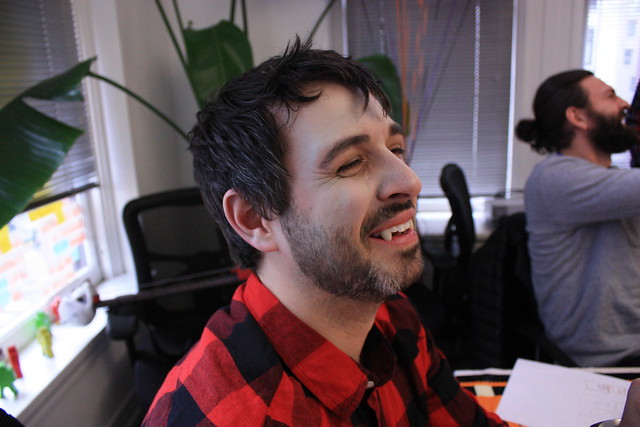 But then again, we aren’t.