Skip to content
Posted in: Complaint Letters, Rants and Raves 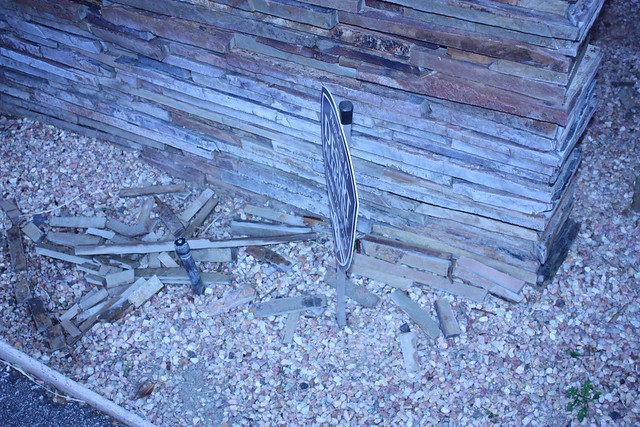 The place was literally falling apart. Whatever. NBD.

I wanted to send you a letter just between us, you know? But since you aren’t answering any of our emails, and it’s pretty obvious you aren’t going to reimburse us for the money we sent you, I figured I’d just drag all our dirty laundry into the middle of the street and air it out here.

It smells a little like sewage, but I’ll get to that in a moment.

We spent a week in one of your rental homes in Palm Springs – a place with the rather cumbersome yet delightful title of Upscale Luxury Tuscany. Now, this name was grammatically troublesome, sure, but my bigger issue was its total inaccuracy. I feel it pertinent to note, Linda Richman style, that the place was neither upscale, nor luxury, nor was it Tuscany.

Maybe it was some sort of ironic thing? Like how I call my mom’s house The Chateau, even though there is usually at least one homeless person sleeping in her garage? If that’s the case, then you should really let people know. I realize that sarcasm is hard to convey in vacation rental listings, but you should really do a better job of communicating that, if that’s your angle.

Because, seriously, there was some crazy catfishing going on in those photos. 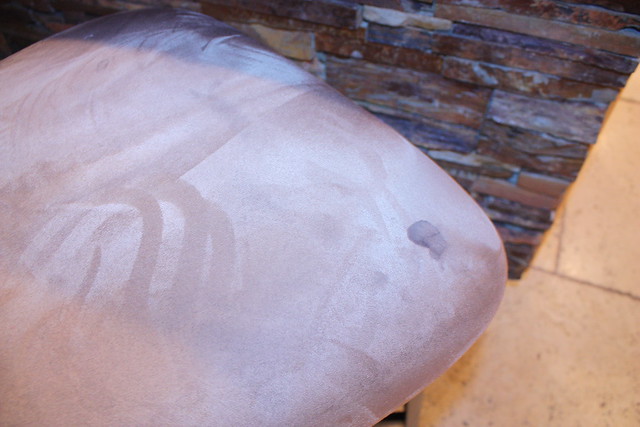 In hindsight, I find it charming that I was taking photos of little stains that I was worried we’d be charged for, when the real horror could not be seen.

Now, we are, as is evidenced by our eating habits, not a picky bunch. I once sat around my dining room table at 3am with that same group of people, eating lukewarm burgers and everyone talked about how we needed to do stuff like that more often. We ate the hell out of that specious pie I wrote about on Monday.

Similarly, we’re pretty happy with most places at which we stay, provided that the room is commensurate with the price we’re paying. I will sleep in a closet, but damn it, I better be paying closet prices, you know? If I would be better off BUYING an actual closet from IKEA and sleeping in that, then we have a problem.

Based on the pictures we found of your rental, the place looked pretty swank, and the price (a whopping $4k for one week) certainly suggested as much, too. So we went for it.

We were a little worried when we found ourselves driving up the narrow road to our place and realized there was massive construction going on just down the street, which had been conveniently left out of any forms we signed. We shrugged it off and told ourselves that sound waves don’t travel uphill. This was the start of our vacation, mind you, and that sort of self-deceit is necessary to have a good time. It’s the same delusion that you need to think it’s a good idea to pack a bikini when you are rocking a mid-winter body.

At first blush, the house seemed nice enough, a little pricey for what it was, but still quite pleasant. Of course, most houses seem like that at first, even in horror movies. You’re so caught up with how lovely the crown molding is, you neglect to notice that the walls are bleeding.

Anywho, we noticed a few things here and there, and I took my camera and snapped a picture or two, just to make sure we weren’t going to be charged for the damages. A broken picture frame here, a stained chair or four there, blinds that didn’t roll up, and a heated pool that we paid extra for, that didn’t actually heat up.

We fiddled with a few buttons on the control pad, and managed to get the hot tub to heat up, but that was about it.

We inspected our room. Once I removed the mound of decorative pillows from our bed (enough to make a suitable fort – well done. That should be in the brochure), I found that there was a rather odd colored stain on the comforter. 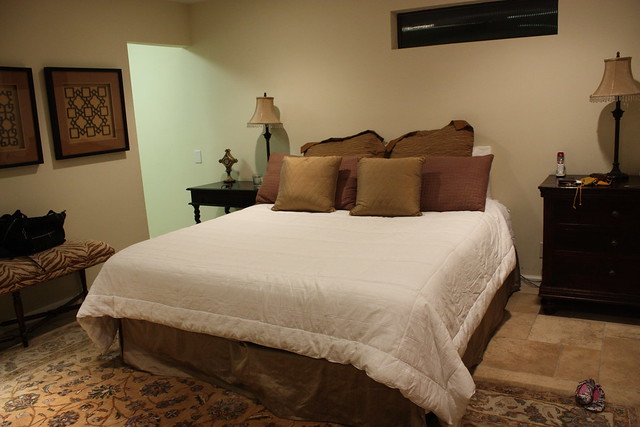 Not pictured: the specious stain we hoped was blood.

Again, because I want to illustrate our non-pickiness, here’s the interaction I had with my friends about it:

Me: Um, you guys? There’s a weird stain on our bed.

Rand: What color is it?

Eric: Yeah, it’s probably just blood. If it were brown, well, then we’d have a problem.

I’m pretty sure they high-fived after that, but I can’t quite recall.

So I ignored the please-let-it-be-blood-because-that’s-the-better-alternative stain and took a peek into the bathroom, where I found a large tub of plastic Tupperware that was catching drips from our shower. I note this because later, when we called about the leaking shower, whoever answered the phone tried to claim that this leak had sprung up during our stay, and wasn’t there earlier. 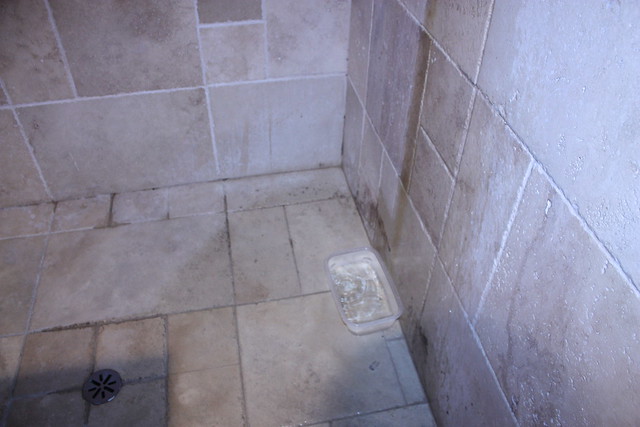 Which would have been pretty amazing, because it meant that someone had put the Tupperware there in ANTICIPATION OF A LEAK, which, for the record, is the worst use of clairvoyance, possibly ever.

“Can you see the future?”

“I need a piece of Tupperware.”

It started slowly at first. Did the little one need changing? No. Did we need to take out the trash? No. Had someone defecated in the middle of the living room? No.

And yet, the smell. It wafted in every evening, filling the living and dining rooms with a rotten sewer smell. We gagged. We lit candles. We stayed close to the ground to avoid it. In the morning, we opened the doors and windows, and we called your repair hotline.

On the second day, a plumber was finally sent, and he quietly explained that the couldn’t really fix most of the issues with the place, but he did tighten the fixture on the kitchen sink. And then he left.

The next day, we called your hotline again, and were told that you guys weren’t responsible for things that broke during our stay. We explained that these things seemed to have been going on for a while, to little avail. After much insistence, we got another repair man to come out and fix the leaky shower. The broken toilet and sink remained, well, broken.

We called a third time, because, frankly, we had started to miss the sound of your voice. Someone was finally sent out to fix the pool on our second to last day. They left us a note telling us to stop playing with the buttons, and it was our fault that we’d managed to override the controls.

We requested some sort of refund for our rental. For the broken pool heater, the leaking shower, the busted toilet, the clogged sink, and all the other little issues that popped up. We even left the weird stain out of the discussion, and the fact that our pillow fort kept collapsing.

And of course we mentioned that still, the house smelled like a sewer.

We were told that no refund would be given, but were offered a free late check-out, which we declined, because we’d already paid for that.

And yet, in spite of all of that?

We had a nice time, because we are very good at having nice times, wherever we are. 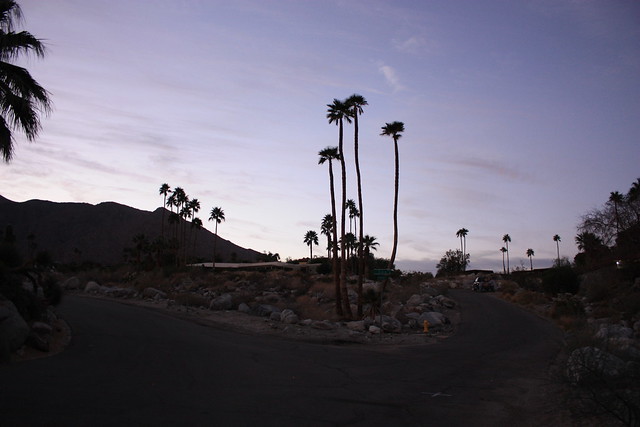 “The other houses in this neighborhood, except for this one, are really nice!” – Rand, pleasantly.

And I will say this for the Upscale Luxury Tuscany Rental: there was one good thing about it. There was an excellent mixing bowl in the kitchen. And that seems a risky thing, frankly. When the best thing about your rental is something that a disgruntled travel blogger could very easily shove into her carry-on bag and take with her.

I’m not saying that I did. I’m just saying that if I had, it would have been justified, as I certainly paid for that mixing bowl. I paid dearly for it.