Skip to content
Posted in: "Lifestyle", Food, Nothing to Do With Travel 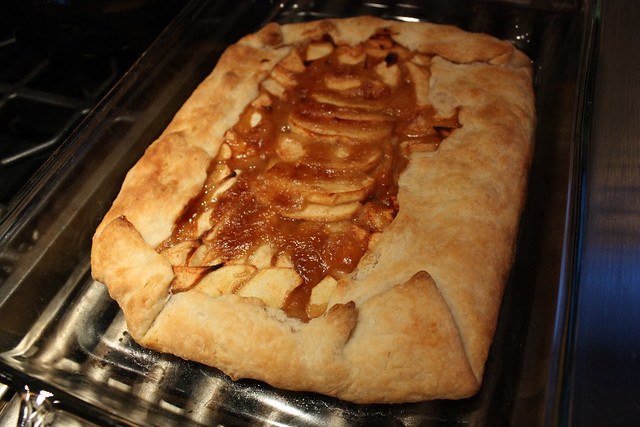 Fun fact: I tried killing it with fire, which just resulted in a lovely golden brown crust.

Someone recently told me that I need to start “lifestyle blogging” instead of just travel blogging, which sort of confused me, because my everyday life isn’t necessarily something you’d want to emulate. Most days, I’m locked in a battle with myself about whether several cookies and a glass of milk are as nutritionally viable as oatmeal.

That fight often turns ugly. The Pioneer Woman does not have such quarrels with herself, I’m sure. I bet she makes really healthy oatmeal that tastes like a cookie. I bet her children have zero cavities.

I bet she never sniffs a shirt to see if she can wear it again.

If you are unfamiliar with lifestyle bloggers, they are people whose lives resemble a well-curated Pinterest board. They blog about recipes, and the vintage clothing they’ve altered to fit their gorgeous bodies, and there’s occasionally a beautiful and well-behaved child in the background who is not, I repeat, not picking their nose.

That is not my life. My lifestyle blog would be a bunch of articles with titles like:

Calling ‘Dibs’: What to Do When You and Your Hubby Both Kinda Want to Make-Out With Benedict Cumberbatch

“Hey, It Worked for Hitler!” (How NOT to Befriend a Vegetarian.)

So instead I write about travel and cupcakes, and figure that’s for the best. But just to put to rest any doubters out there who think that I maybe should expand outside of that genre, I’ve decided to write outside of the genre. Because what better way to prove someone wrong that to do exactly what they’ve said, with middling results.

The following is my attempt at a recipe for caramel apple pie which then turned into crostata through the magic of laziness and poor planning. You will note that there is no ingredient list, and the instructions aren’t really helpful at all. Mostly, I just started digging through whatever supplies we had in the vacation rental home at which were staying, and tossed together whatever seemed relevant.

Which isn’t how you should do anything, really. Hmmm. Honestly, that could be a good tagline for this site.

The Everywhereist: How Not to Travel. Or Do Anything, Really.

And it makes a very good title for this post, too:

Here’s How Not to Make a Crostata. Ahem.

Step 1: Decide you want pie. This isn’t really a step. It’s mostly how I feel when I’m conscious, and sometimes even when I’m not.

Step 2: Don’t bother looking up a recipe, because if you do, you’ll discover that you don’t have all the ingredients to make it, and then you’ll get discouraged. Discouragement rarely leads to pie making, so we’ll have none of that.

Instead, just start chopping up a whole bunch of apples. (I guess this should be Step 3?) 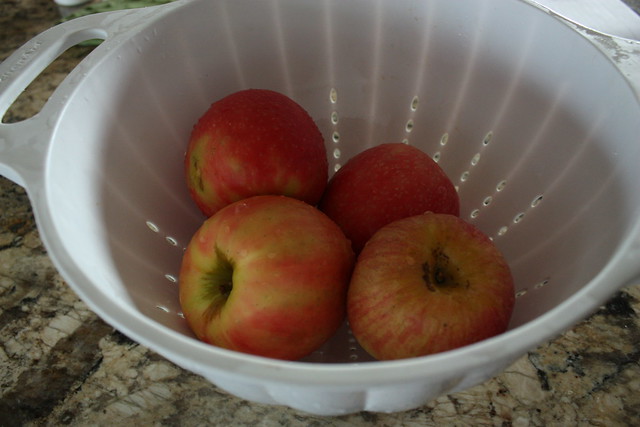 I know what you are thinking: If I bothered to buy a bunch of apples, wasn’t I at least thinking about making a pie? And couldn’t I have consulted a recipe at that point and purchased the ingredients?

Step 7 (Wait, what?): Make sure to keep your slices uniform, because people will probably be watching you, and you want them to think that you know what you are doing. 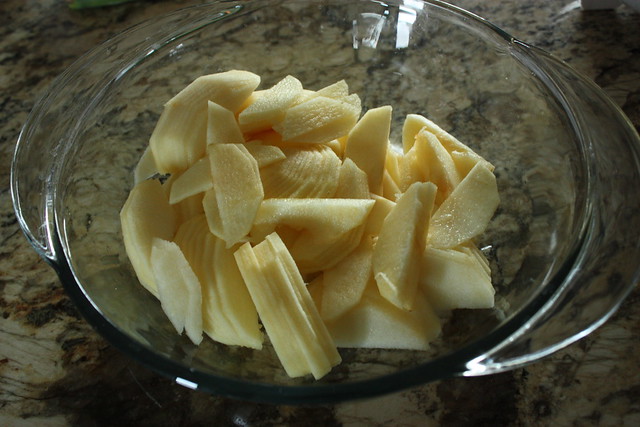 Step 8.5: Once you’ve chopped up all the apples, start making the caramel.

It’s totally fine if you don’t know how to make caramel. Do not look up a recipe (again, we don’t want to be discouraged, do we? Of course not. Put down that candy thermometer because next thing you know, it will be CONTROLLING YOUR LIFE).

Steps 9 – 13: Just start putting things that look like they would be caramel-y in a pan, and start cooking them over low heat.

I think I started with butter. Then I added some brown sugar, probably? I don’t really know. I just started taking a bunch of photos so that anyone watching would think, “Goodness. That lifestyle blogger really knows what she’s doing.” 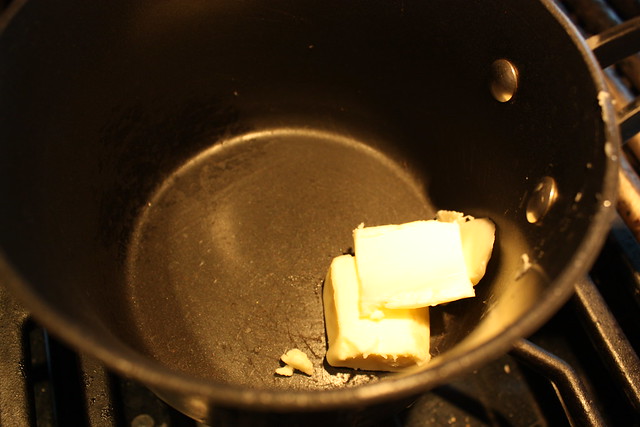 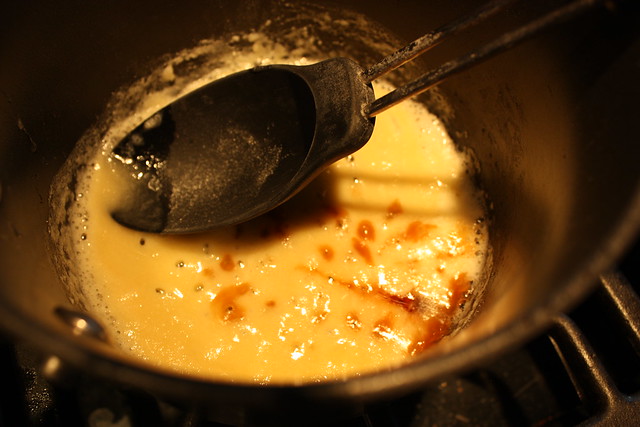 No idea what’s going on here.

I think I may have added flour, too, which was a terrible idea. Flour has no place in caramel, but sometimes I like adding it to recipes where it doesn’t belong, just to alienate any gluten-free folks who might happen to stop by.

So if you make caramel, leave the flour out. Unless you live with people who are gluten-free, and you hate them. 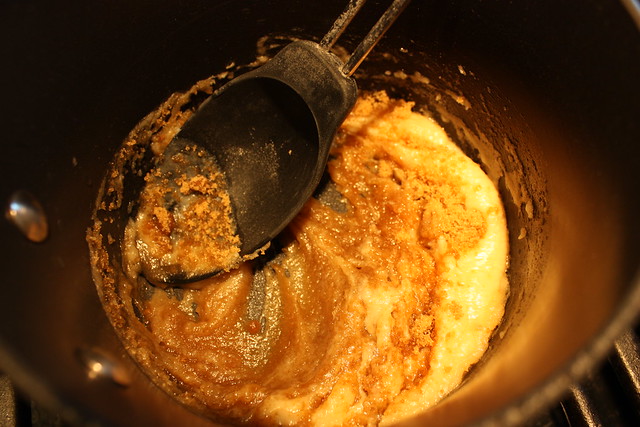 I guess this is sugar or something.

Step 14: Grab bottle of scotch. I added some of it to the “caramel” I was cooking on the stove. 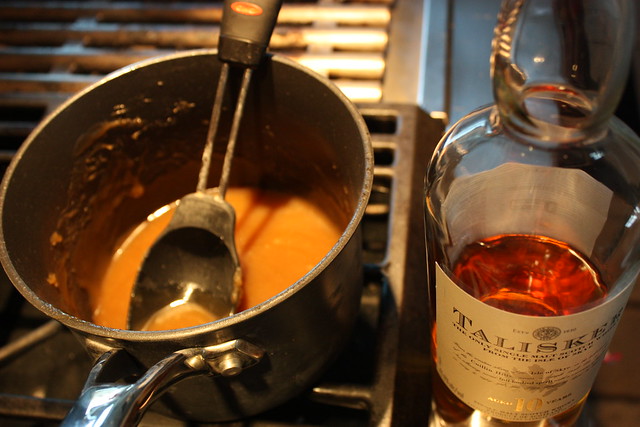 I’m not gonna lie: this was a great idea. It might be the best idea I’ve ever had, save for marrying a guy who likes to drink expensive scotch. You’ll want to keep the mixture on a low heat, otherwise the alcohol will burn off, and you’ll have a dessert that doesn’t make you drunk.

No one wants that.

Actually, maybe Step 1 should be “Grab some scotch.” And then it doesn’t really matter if the recipe gets made or not.

(Also, before I get a bunch of hate mail, please note that my husband doesn’t usually let me cook with his Talisker. We had a week to finish the bottle since we couldn’t take it on the flight back home, so that meant I got to put it in basically everything.)

Step … whatever: I don’t really know what happened to the caramel at this point.

I guess I let it cool or something, or maybe I was eating it with a spoon, because I’ve never been one to wait until a dessert was actually finished before eating it. Anyway, the next picture on the roll is of the apples, but now they’ve been covered in spices? 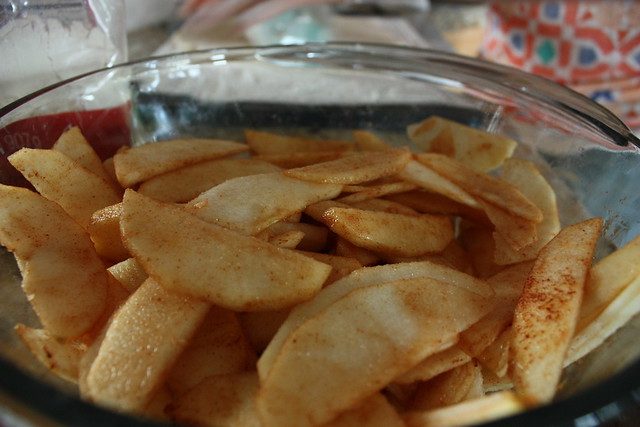 So I guess that would be, like, Step 16 and three-quarters.

I think I used cinnamon, but you can use any of the following: cloves, ginger, cardamom, nutmeg, allspice. Disregard what anyone tells you – they are all basically the same spice, and anyone who pretends that they aren’t is lying to you. Those are the same people who tell you that they can taste chocolate and cherries and Crayola crayons every time they drink red wine.

Full of shit, the lot of them. Wine tastes like grapes. Duh.

You will need approximately a buttload of it when making desserts like this. A tiny voice inside your head will say something like, “GAH, STOP.” Just ignore it and keep adding sugar.

Step “I’ve stopped paying attention to the steps and I might be drunk on caramel”: it’s time to roll out your pie crust (which I guess I should have told you to make earlier. Oops.) I realize that I didn’t include a recipe for a crust, but honestly, recipes won’t really help you. Even if you have a perfect one, pie crust is impossible to make. It basically needs to be kept freezing cold and barely touched, so unless you are a sentient robot working at an outpost in Antarctica, you won’t be able to make a good one.

And if you were a sentient robot working in Antarctica, you probably wouldn’t be making pie crusts because there are more important things for you to do like dissecting penguins and taking snow samples and …

You know what? I have no idea what happens in outposts in Antarctica. Maybe they are full of sentient robots trying to perfect a pie crust. That would actually be really cool. That’s research I care about.

Anyway, you probably won’t be able to make a good pie crust, so just pull some recipe from wherever and try not to knead it, okay? Just make it as flat as you can without getting your grubby hands all over it.

Hopefully, you will have a rolling pin with which to do this. And not, say, a bottle of vinegar.

Guess which I had. 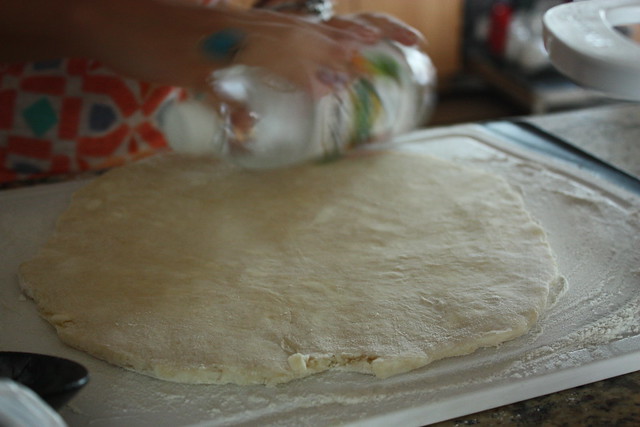 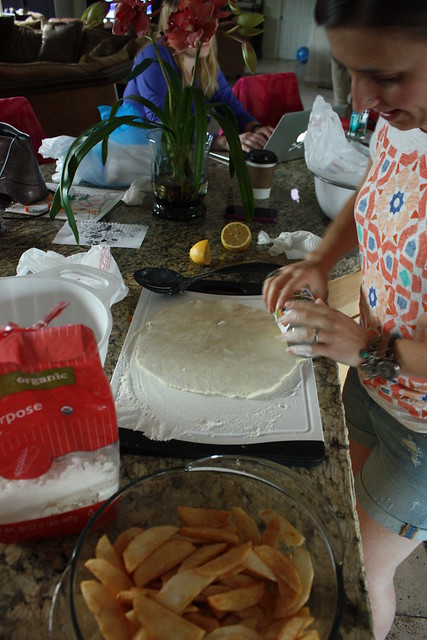 This photo also suggests that there might be lemons in this recipe, maybe? Or I was just having a G & T.

I’m pretty sure that using a bottle as a rolling pin is one of the more desperate acts I’ve ever committed in a kitchen (and notice how readily I’m rolling with it? Clearly, this has happened before). When you start MacGyvering shit just to get more sugar into your mouth, it might be time to re-access your priorities in life.

Step “Just abandon the whole ‘steps’ thing already, as it’s an embarrassment to everyone involved”: it’s time to assemble the pie.

Now would probably be a good time to stop calling it a pie, actually. Because you probably don’t have a pie pan, or you haven’t rolled the dough out properly, or you don’t have enough to make a top and bottom crust, or you’re just doing a half-assed job of it.

Start calling it a crostata. Crostata is an old Italian word that means “I needed dessert immediately and I didn’t really think this thing through.” If you call it that, then no one will expect it to look like a pie, which is good because, holy crap, does it not look like pie.

Don’t forget your “caramel” which  – who the fuck am I kidding? It’s just Talisker, brown sugar, and butter. And … flour. (Oops.)

Step “Fuck it”: Arrange the apples in a shockingly precise pattern, because at this point, people might once again tune into to what you are doing, and you want them to think you are competent enough to be left alone with a working oven. 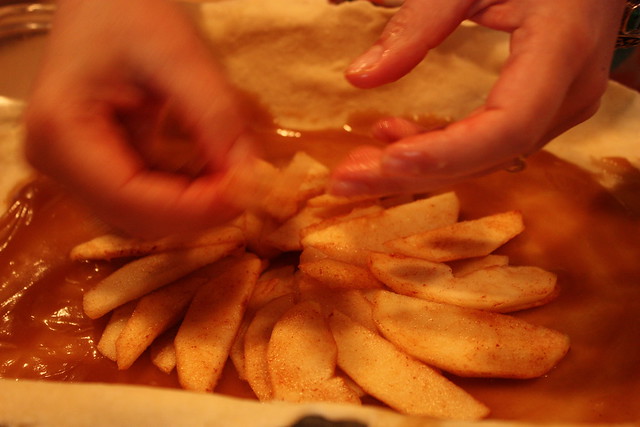 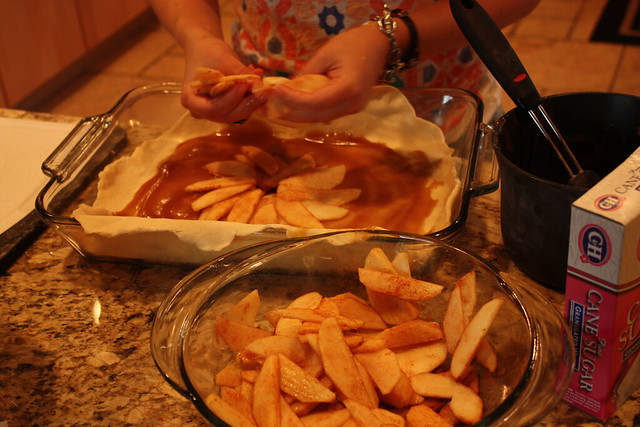 Note that I put the “caramel” on the bottom, which makes for a nice, soggy crust.

Bake the thing until it’s done. I don’t really know how long that would be or at what temperature. It depends on the size of your crostata, and whether or not you remembered to turn on the stove.

Step “This is why the Pioneer Woman is famous and I am not”: Take it out and let it cool, or don’t. It’s not like there’s a science to this or anything.

Be sure to take lots of close-up photos, again giving the distinct but nevertheless fraudulent impression that you know what the hell you are doing. 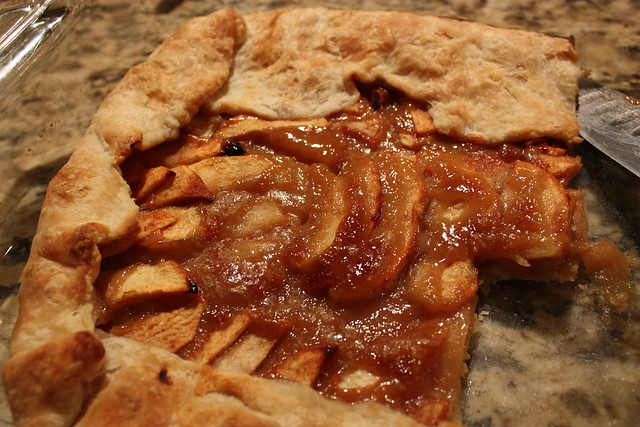 Fun fact: I’ve found that when you add booze to baked goods, it tends not to evaporate. I learned this because whenever a recipe calls for vanilla extract, and I’ve run out, I just pour some booze in.

This has been met with rave reviews. So sometimes I do it, even when I have vanilla extract. The result is magical: a dessert that can get you drunk. Pretty sure that’s how royalty does it.

Step “Please, god, let this be over”: Get drunk on crostata. That’s what I did, in my probably-shouldn’t-be-emulated life. 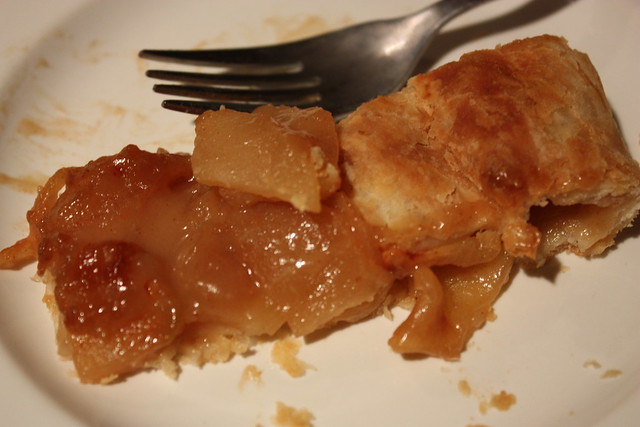