This post was almost about macaronuts (which is, for those of you who are unfamiliar, a French macaron that is batter dipped and fried, like a doughnut. I whispered sweet nothings at it while eating it, like a praying mantis to her mate. But something slightly more interesting happened just today (if such a thing is possible.) and I figured I’d share that with you first, even though now we’re all thinking about macaronuts. 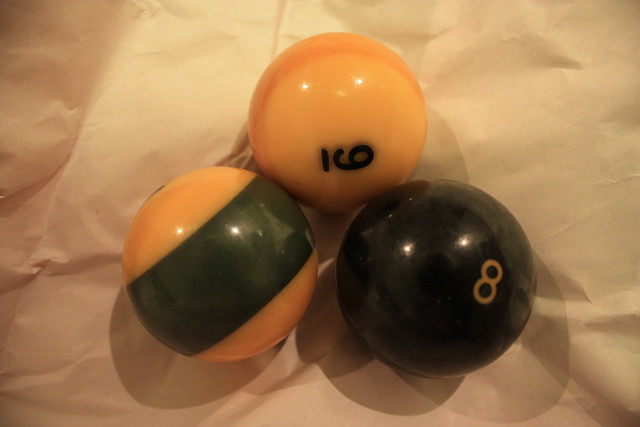 Anyway, today we flew back from Palm Springs, after a week spent lounging around in the sun with our friends Sarah and Eric (and their little son), sharing meteorologically-fascinating tidbits about the current polar vortex, including this one: parts of the United States are currently colder than Mars.

Did that just totally blow your mind? Because it should.

Our trip to warmer climates was a vacation – an honest-to-goodness-I’m-not-expensing-a-damn-thing getaway – of which my husband has far too few. It was uneventful, save for me constantly tormenting our dear friend Eric. Eric is a bit of a planner, and he’s very, very organized, so there’s plenty to torment him about.

Take this exchange, concerning when we needed to regroup so we could catch our return flight home together:

Eric: Okay, so we need to leave just after 2:oopm in order to get to the airport on time.

Eric: Damn it, woman, YOU ARE ON MY LAST NERVE.

It was all kinds of crazy fun, and while I’ve got several blog post’s worth of adventures out of the trip, I realized as we were driving to the airport (we left the house at 2:30. Eric was not happy. Then we all blamed him for making us late, which was hilarious.) that I didn’t have one solid anecdote from the trip. No crazy, singular story to tell, no strange-but-significant lesson learned.

And it’s not like something crazy and significant was going to happen in my last hour in Palm Springs, right?

Everything proceeded calmly and uneventfully. We got to the airport with plenty of time to spare. I got TSA pre-check, as did Rand, and we walked through security without taking off our belts or shoes. I patiently waited for my bags to emerge, and, from the angle at which I was standing, I was able to see the screen at which the x-ray operator was looking.

For some reason, I’ve noticed, even bags with the most innocuous contents look absolutely diabolical on those machines, don’t they? My curling iron resembled some sort of torture device. The contents of my toiletry kit looked like the accouterments of a heroin addict.

I stared, my mouth slight slack, as I watched my (and several other travelers’) bags being x-rayed. Every now and then the agent would highlight something on the screen and a bag would be taken off the belt for closer inspection.

When my suitcase came through, the agent highlighted a cluster of black orbs in the center of my bag. A trio of old billiard balls I’d purchased at an antique store in Palm Springs – the only souvenir I had from the trip.

“We need to take a closer look at your bag,” one of the agents told me, and I nodded. By now, everyone else was through security. Rand caught my eye from across the room.

“The billiard balls,” I shouted at him. “They look weird on the x-ray.”

I waited for an agent to grab my bags (I wasn’t allowed to touch them), and heave them over to a metal table for additional testing. I apologized for the weight of my bag – I could actually see her straining to carry them over.

She carefully unzipped my suitcase, and found the pool balls wrapped up in newspaper at the center.

“These are really cool,” she said brightly, and I smiled. Thus far, everyone had been incredibly nice.

“I just need to swipe them,” she said, and I nodded. She held a white circular pad in a pair of tongs, and gently swiped the surface of the pool balls with it.

I chatted with another technician while she went off to get it tested. I checked my watch – there was still plenty of time before my flight, but I was starting to get a little nervous.

The technician came back a moment later, her face serious. The test came back positive (for what substance, I am still unclear).

My jaw might have dropped slightly. Another agent came over – a short, blonde woman who was a supervisor of some sort. She calmly explained that they’d need to do some additional tests and search all of my bags. I’d need to remove my shoes and jacket (which I’d been able to keep on during my pre-check screening) and be patted down. I nodded.

Rand had come back to check on me and he managed to keep an air of levity about it.

“They were from a thrift store,” he said. “So they probably used a cleaning agent or something that triggered it.”

“Just imagine how many people have probably touched those things,” she added. “No wonder they set off the detector.”

I smiled and made some off-hand remark (“Oh, totally.”), but my heart was pounding in my chest. I exhaled deeply and told myself that everything was fine.

I’d heard of stuff like this happening before. Once, a woman in line ahead of me was selected for a random screening. Her hands were swiped, and they tested positive for explosives. Apparently she’d just applied lotion with glycerin in it, which can do that. And I’ve heard countless stories about people who came into contact with fertilizers or commercial cleaning agents days before and still managed to test positive for explosives.

I realized that those billard balls could have come from anywhere. It had never occurred to me to consider washing or cleaning them. And I was now thoroughly convinced that they were going to get me strip-searched.

The supervisor patted me down (it was identical to the pat-down that you receive if you opt-out of the full-body scanners, which I always do), while the other agent searched through the rest of my bags, swiping various things with a white circular pad.

And while I’m against making it easier for people to violate the fourth amendment, let me tell you: those little packing cubes that fit into your suitcase? Those make it really easy for TSA to search your bag and repack it. The agent noted several times how much she liked them. I had to agree – they are great.

The additional tests yielded nothing, and the supervisor took one last glance at my souvenir from Palm Springs.

“I’m okay with her keeping these,” she said to the agent, who wrapped them up and placed them back in my bag. She could very easily have confiscated them. It was entirely up to her discretion. 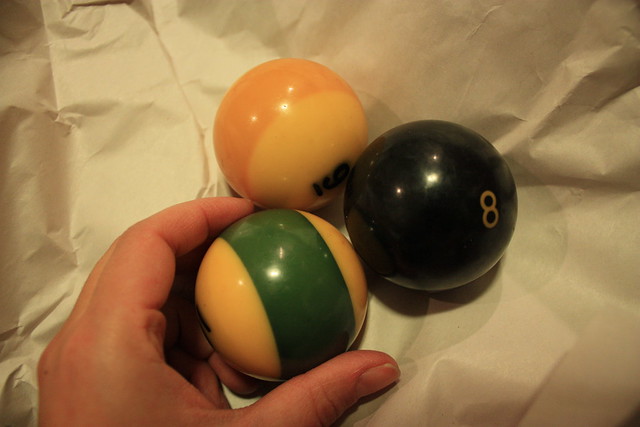 They helped me repack my bags, and wished me a safe flight. I was amazed by how nice they all were; the experience was merely inconvenient – it could have been much worse.

I met back up with Rand, Sarah, and Eric, and filled them in on any details Rand might have missed (he’d been giving them updates).

“You know what?” Sarah said. “I like those pool balls even better now.”

I nodded. I did, too. Before they were just a souvenir. But now? Now, they had a story.