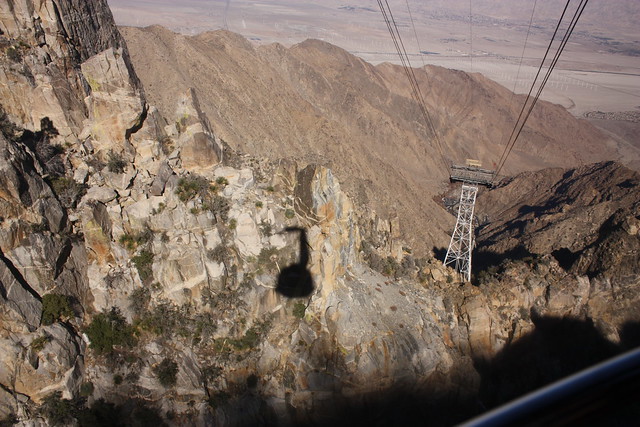 The shadow of our car on the rocky mountainside below us.

For years, my aunt has tried to persuade me to move to California. Her tactic has been repetition of the state’s numerous glittering qualities.

“We have the beaches, and then the mountains are just an hour away. An hour! You can go swimming at the beach and then go skiing!”

When that fails, mostly because I don’t understand how such a thing could be true (I have seen no such evidence of the multi-climate environment she claims exists in Southern California. It is, all of it, very warm and rather pleasant), she tries changing tactics.

“Well, then why the heck would I want to move here? I can get rain at home.”

Met with such opposition, she tries the last thing in her wheelhouse: a solid dose of Italian Catholic guilt.

“It would be soo nice if you were closer,” she says.

Regrettably, this usually works, so I’ve just reinforced this behavior over the years. I suppose there are worse things than having an aunt who wants you around all the time.

Still, I always wondered of the California that she spoke of. Did it exist? Were there places where you could lounge on a beach, and then go skiing just a short distance away?

Not quite, it seems. But Palm Springs comes pretty close. We spent our days lounging around the pool (or rather, we tried. Alas, the broken heater made that impossible. Thanks, Vacation Palm Springs. Please stop sending us coupons.) And one day, we decided to head up to the mountains.

There is no guarantee that you can ski at the top. Often times there is a bit of snow, but this winter was far too warm. Still, the temperatures at the top were around 40 degrees, 35 degrees colder than the valley from which we came.

We left our car in a lot down below, and took a bus to the lower station (elevation 2,643 ft). We arrived just in time to catch the next tram up. 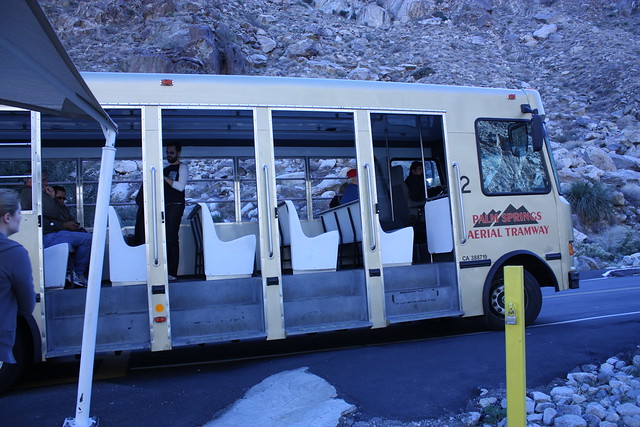 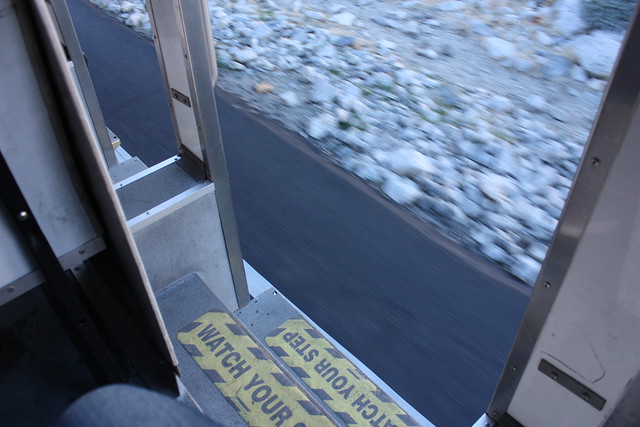 There are no seatbelts, and so I gripped my camera and the edge of the seat for the entire ride.

The tickets for the Palm Springs Aerial Tramway were a little steep ($25 a person) as was the ascent (the ride is only a few minutes long, but drops you off at Mountain Station, elevation 8,516 feet).

If you are averse to heights, then I suspect the tram ride up will be a sort of hell for you. The car is lined all the way around with windows, many of them propped open to pressurize the interior as you ride up. 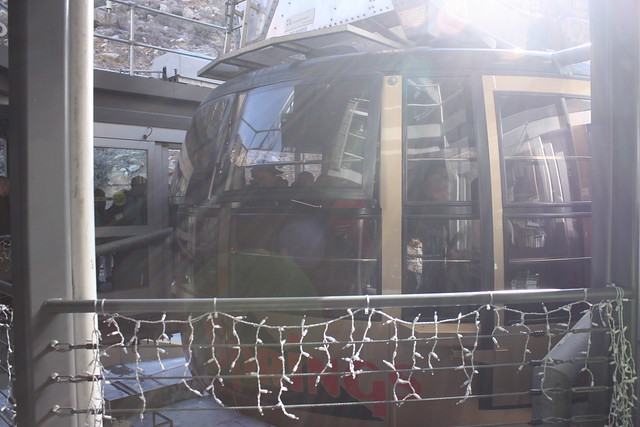 A few passengers tried closing the windows against the chilly air, and received a severe scolding from the operator. One girl quietly whispered to a friend that on a previous trip, it was so cold icicles had formed on the edges of the window. 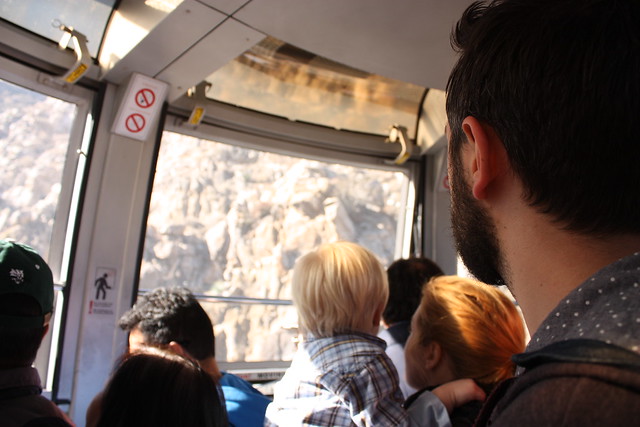 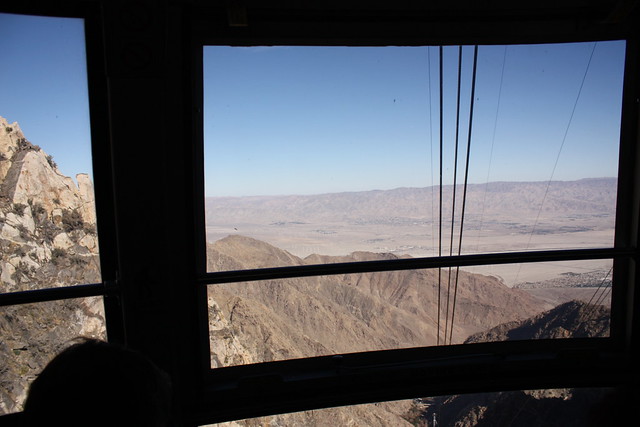 But that’s not the scary part. No. If you are afraid of heights, then you don’t simply have to deal with the blast of cold wind and the open windows and the car speeding up the side of a mountain, occasionally swaying uncomfortably on the seemingly too-small cables that hold it up. 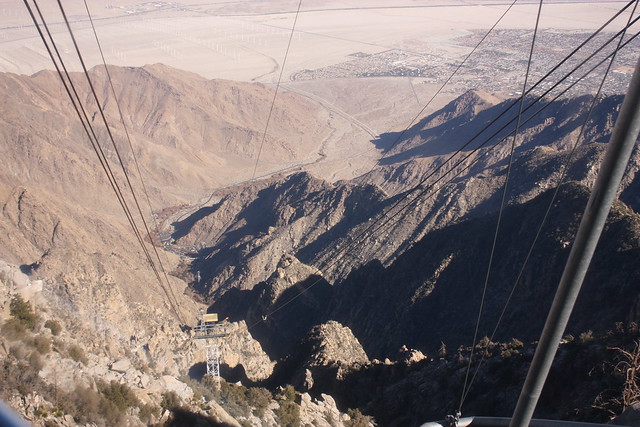 You also have to deal with the floor of the car rotating. 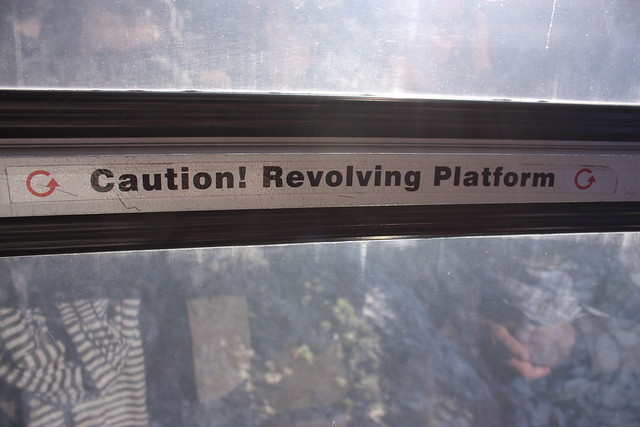 So if you are already afraid, you will find that the one thing you hoped would be secure – the ground beneath your feet – is also moving. And that would be somewhat terrifying, I imagine.

Fortunately, I am not afraid of heights. None of us were, it seemed. 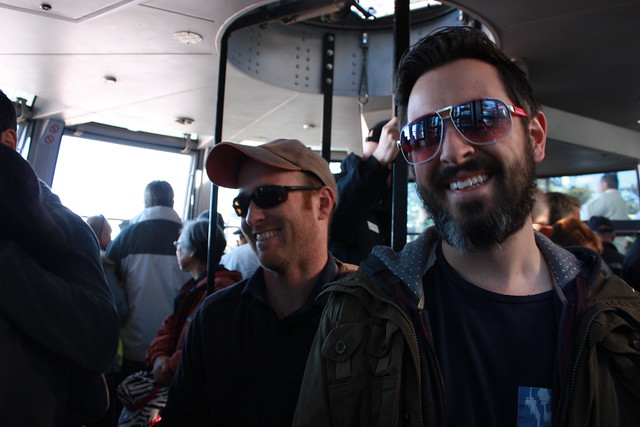 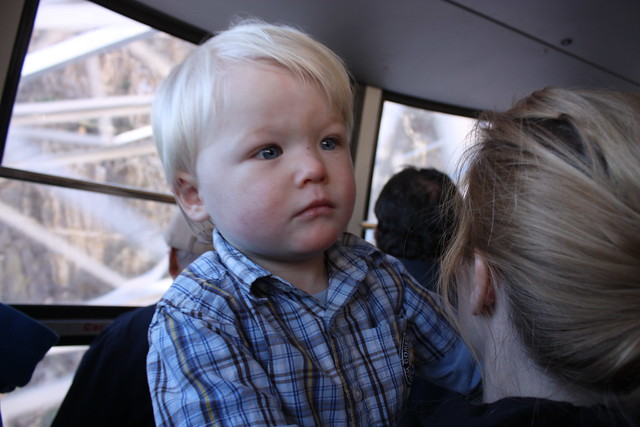 And so the ride was exciting, and lovely, and perhaps a bit too brief. And then we’d reached the top. 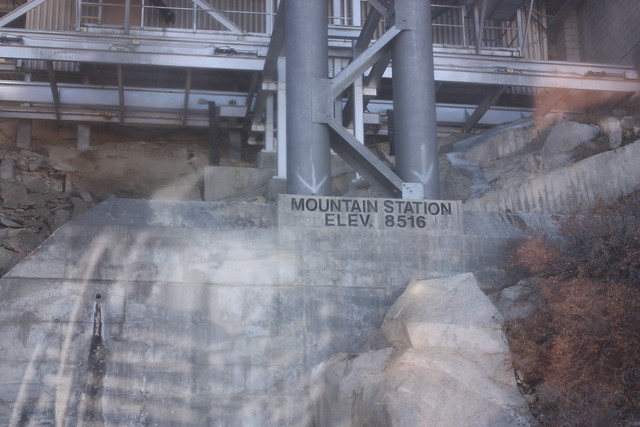 There were gift shops and restaurants, cafes and panoramic terraces. Everything the spoiled traveler could ask for. The Chargers game was even playing on a few screens, and we all averted our eyes, since we had it recording back at our god-forsaken rental home. 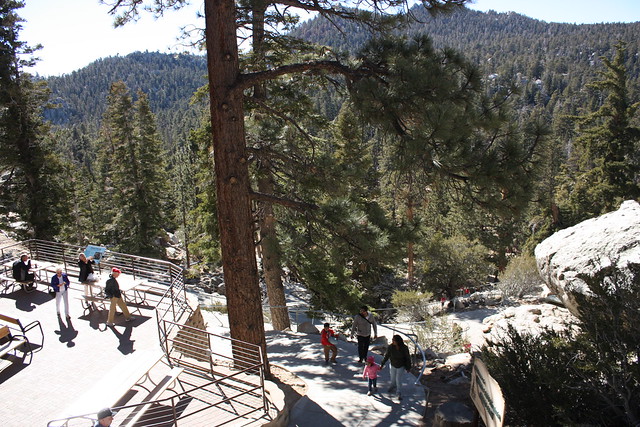 We sat outside on a park bench and enjoyed the sun and a few snacks, then we walked down into Mt. Jacinto State Park. It encompasses more than 14,000 acres of wilderness. There are hiking trails and camp grounds, nature walks and informative signs. In colder years, there is the opportunity to rent snow shoes and cross-country skis. We had no need for that, and just walked around in the sun dappled stillness, interrupted only by distance shouts and conversations, the soft rustle of steps crashing through the underbrush. 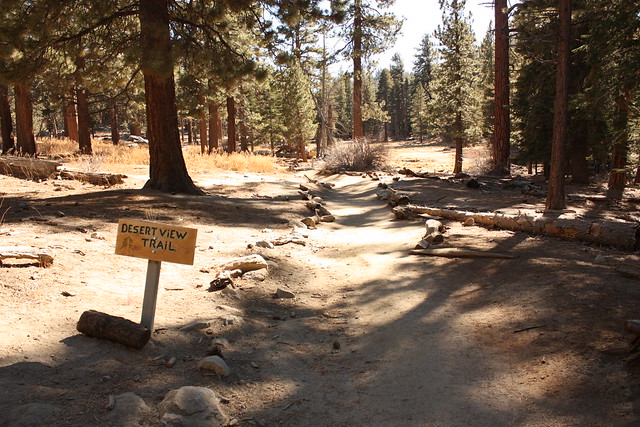 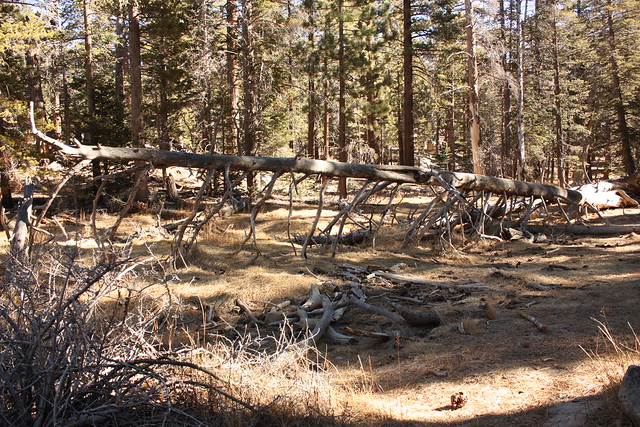 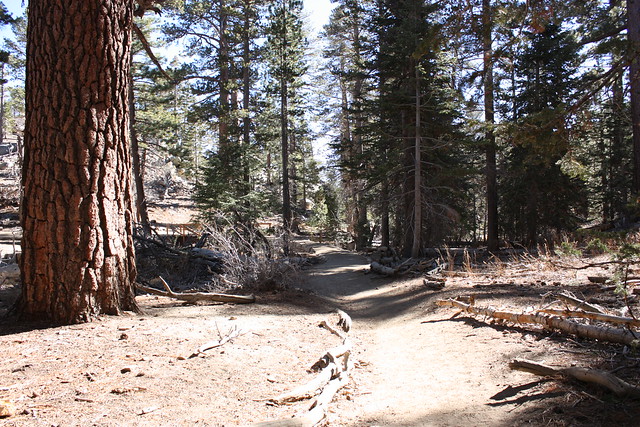 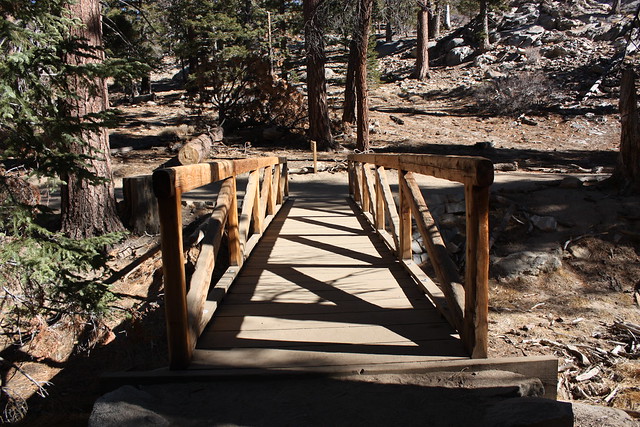 The wind blew through, whistling soft and low, making sure we could never grow too warm in the California sun. 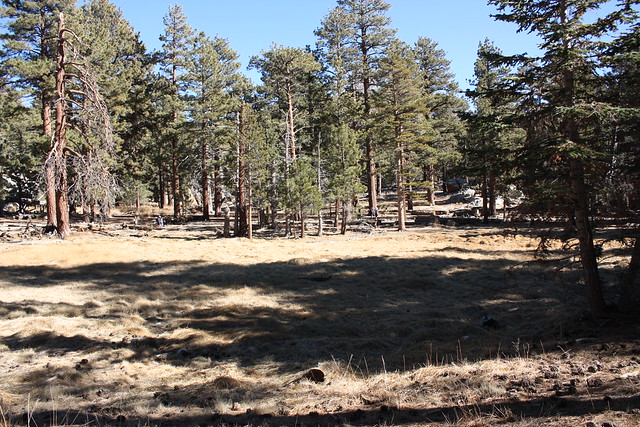 The climate here is diverse and different from the valley below, and the wrinkled brochure I kept from the trip notes that the ascent up the mountain carried us through “5 unique life zones, from Mexican Sonoran Desert to Alpine Wilderness” – a phrase which is both impressive and utterly meaningless to me.

It is not quite what my aunt promised, but it is not far off, either, I suppose. And it is lovely and peaceful, all of it. But it doesn’t feel right to me. It doesn’t rain here, and the ground doesn’t feel like a sopping wet sponge under your feet. People smile at one another, a sort of joy that comes from processing Vitamin D readily and not spending day after day under a grey sky. 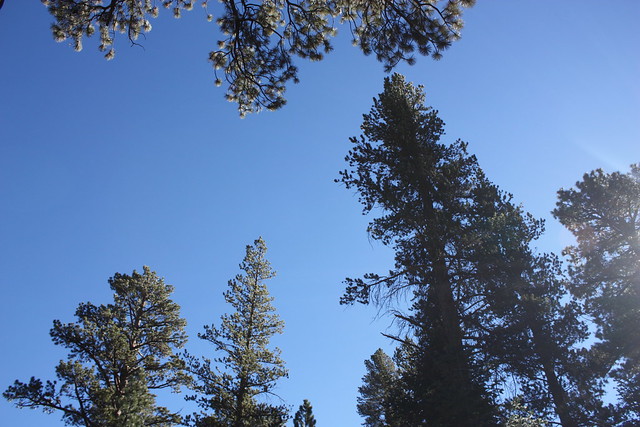 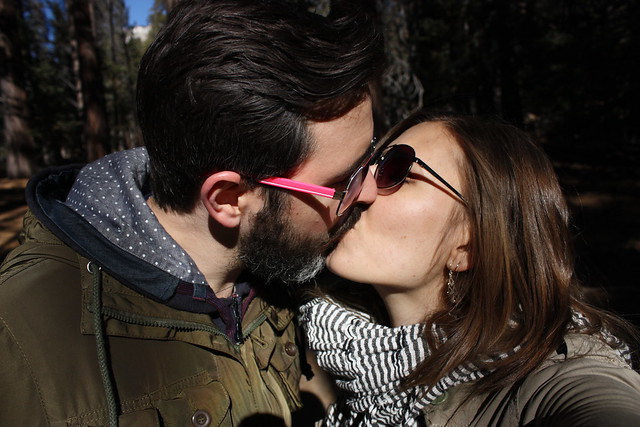