I know it isn’t Wednesday – I didn’t blog yesterday because I spent the entire morning and part of the afternoon downtown, participating in the largest gathering of people in Seattle, ever. It was strange and crazy and a bit magical.

And as I was flipping through my photos from Palm Springs, I came across a photo that was strange, and crazy, and a little bit magical. I took it in Niland, California, outside of the United Food Center. We were coming back from Salvation mountain (which is also strange, and crazy, et al, and I will be sure to tell you all about it next week), and I pulled into a parking lot so we could our bearings.

Rand saw him first, and as is his fashion, was able to distill the situation down to its essence in just a few words.

“That is clearly the greatest human being who has ever lived.” 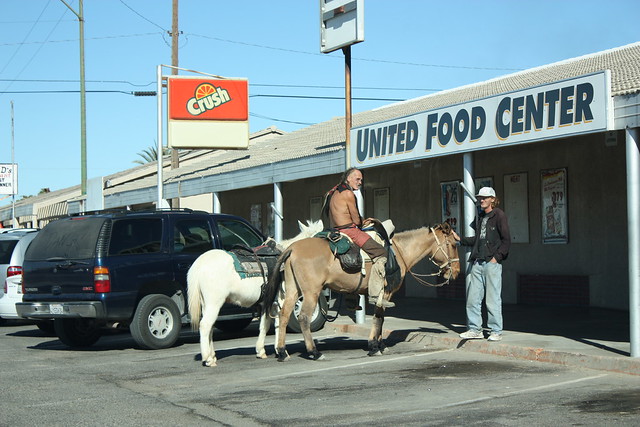 I immediately grabbed my camera, because it was just too wonderful for words. The way he sat, casually chatting with his friend, suggested that he was a local. He wasn’t out making a statement, or trying to get attention. He was just heading to the grocery store.

And he’d even taken care to occupy only one parking spot.

Rand was right: this was, all of it, truly great. 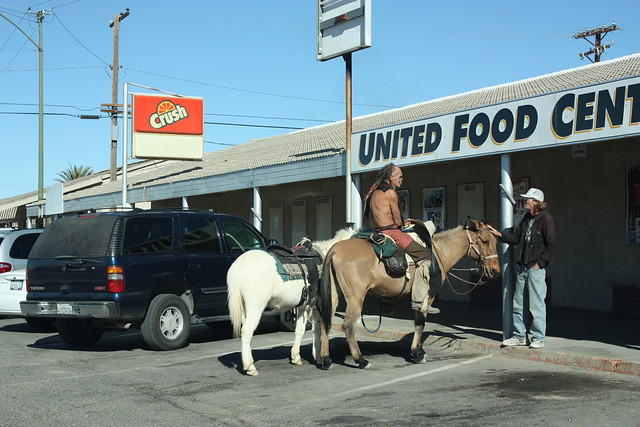 “Are you sure it’s okay to take photos of him?” Eric asked me warily.

“If he asks me about it, I’ll just tell him the truth: that I wanted to take a photo of him, because I think he looks wonderful.”

Because, boy, did he ever.