Skip to content
Posted in: Life at Home, Nothing to Do With Travel, Random Musings

I have a mustache. 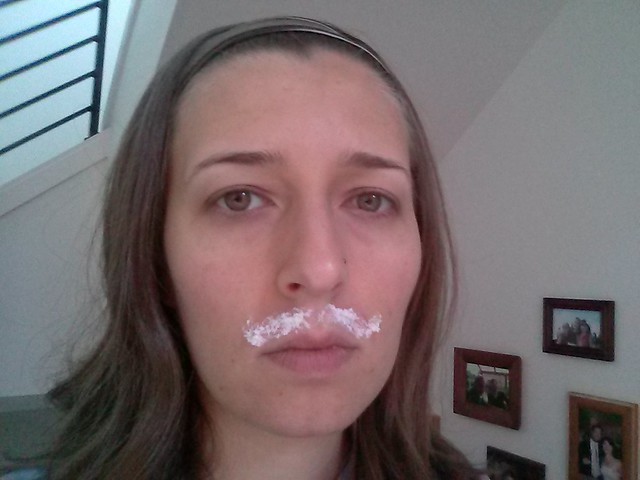 I’ve mostly come to terms with this. I’ve had it for the better part of twenty years, and like my weird toe (which we will not be discussing) or my amazing European nose, it is very much a part of me.

But every now and then, I get the crazy idea that maybe I should get rid of it, which is what we are sometimes tempted to do to the things that put the “unconventional” in our “unconventionally beautiful.”

It happened most recently last Thursday. We’ve been home for a few weeks, and upon our return, I bumped into a friend as she was leaving a threading salon just around the corner from me. Her verbal endorsement – that it was ridiculously inexpensive – swayed me almost as much as her non-verbal one: a pair of beautifully groomed eyebrows that looked, even in real life, like they were airbrushed.

The place was across the hall from a tattoo parlor and above a taqueria, so it seemed pretty legit. I decided to try it.

In hindsight, I probably should have just gotten a taco. Or possibly a tattoo.

I went in with the intention of simply getting my brows done, but our recent jaunt in Italy had left me tanner than usual, and somehow simultaneously bleached out the hair on my upper lip. When I saw the photos of smooth-faced women on the walls of the salon, mocking me with their fancy, mustache-free faces, I decided that maybe I was settling for too little out of life. Maybe I, too, deserved to have an upper lip as hairless as a naked mole rat.

After all, naked mole rats are crazy sexy, right? They’re like the Pam Anderson of rodents.

A petite dark-haired woman was running the show. She told me to have a seat in one of two barber-shop type chairs, while she tended to the woman seated in the other one. I tried not to stare, but my eyes kept wandering over to what was happening next to me. The technician (I have no idea what else to call her), had pulled a length of thread from a spool next to her. She had formed a loop with it, and held one piece in her mouth while holding the rest of it taut between her two hands, in a triangle shape.

Then, in a flash, she rolled the piece of thread over her  client’s upper lip. The woman in the chair barely flinched as the thread caught the tiny hairs and pulled them up by the root.

The seated woman looked calm and comfortable, and the whole thing was over in a flash.

I’ve never actually been to a threading place before, but I was pretty confident I’d be just fine. My mother is Italian. My dad is Russian. The genes for having a teeny tiny mustache are carried on the X chromosomes of both sides of my family. Over the years, I’ve tried lots of depilatory tactics. Including:

You know what I just realized? I’m a huge wimp (also, I need better self-acceptance. More on that later). I was under the crazy impression that I had a high pain threshold (note to self: try to find someone who doesn’t think this about themselves) and that I could handle whatever was coming my way.

It was my turn. I leaned back in the chair, and the technician pulled a new length of thread from the spool. She configured it into a taut triangle, and she began.

It stung. Like tiny little band-aids being ripped off from places where you would never actually put a band-aid, because those places are WAAAAY TOO HAIRY AND ALSO ON YOUR FACE. She began close to my brows, and slowly spread out further and further. I was surprised by the amount of pulling involved. I mean, my eyebrows were pretty well groomed (or so I thought) and yet it was clear that she was amassing enough hair to stuff a couch. (Note to self: see if couches are stuffed with hair before posting, or if another analogy is needed.)

She even started rolling it down near my temples, and I was about to tell her that was totally unnecessary, but the thing was that it hurt, which meant that she was pulling hair out from that spot, which means that MY EYEBROWS WENT ALL THE WAY TO MY HAIRLINE AND I DIDN’T EVEN REALIZE IT.

Apparently I have massive eyebrows. And not in a hot way, like Peter Gallagher, who looks like he’s trained two sexy little caterpillars to perch above his eyes. No. I have massive eyebrows in a didn’t-even-know-they-were-there-until-one-day-your-husband-wakes-up-and-finds-he’s-in-bed-with-a-massive-eyebrow kind of way.

Involuntarily (INVOLUNTARILY, I SAY!), my eyes began to water, because when someone suddenly rips out a bunch of hairs straight from their roots all around your face, that’s what happens. Your body thinks it’s under attack, and it screams, “PROTECT THE EYES,” which is lovely of it to do, but doesn’t actually help the situation, because now you can’t see, and the technician is worried about you and it’s only prolonging your suffering.

“I’m fine,” I said with forced cheerfulness in response to her inquiries as to whether I was okay. My nose was running and my eyes were red and teary, but I was smiling like a lunatic, which could not have been at all comforting to her.

With a wary look, she asked me to help pull the skin around my eyes taut. I obliged, which meant that I was sort of pushing my own eye back in its socket and helping to further facilitate my own suffering, and at that moment I began to question the lengths that women go to in the sake of beauty, but those thoughts were shattered by the interrupting shriek of “OW OW OW OW OW” that had taken up all of my internal monologue.

I nodded. I should not have nodded. I should have had a talk with myself right then and there about how sometimes it’s okay to be yourself even if being yourself means having a little mustache. But I did not. I just sat there.

I’ve had my upper lip waxed before (hell, I’ve had even more tender bits than that waxed before). The technician applies the hot wax to your skin, and it actually feels kind of nice right up until she tears it off. It hurts, but it’s over in a flash, and as soon as your skin stops screaming at you in the form of angry, red blotches which can last for hours or days, you get to appreciate how smooth it is.

This was not over in a flash. She rolled the thread over my upper lip and right up against my nostrils, and while her motions were swift, the process took a while. If you want to replicate the sensation at home, I suggest getting a pair of tweezers, grabbing a few nostril hairs, and yanking them out with all the subtlety of a meth addict.

I sat there, tears now rolling down my face (“Because fuck you,” said my mucus membranes), and realized that the woman who had gone before me, the one who had barely flinched, was clearly some sort of superhuman. I bet she probably doesn’t have to look away when nurses put IVs in her arm, and can watch Super Bowl commercials without getting emotional.

And then, miraculously, it was over. The whole process had taken no more than 10 minutes.

I put on my best face as I smiled at the technician.

“Oh, is that it?” I said, dabbing at my eyes and nostrils, which were pouring like a faucet. “It was over so soon. Barely felt a thing.”

I am a terrible liar, which I suppose is a good thing.

She handed me a small mirror so I could get a better look and … wow. My face looked … strangely naked. Like something was missing.

The technician walked me to the cash register (the tears had begun to dissipate), and when she asked if I wanted to buy a package of six sessions, I suppressed a cackle.

I paid her, and tipped her, because I’m fairly certain that she did a great job. Had I gone to someone less experienced I’d probably have left, screaming, a waxy wooden applicator stuck to my armpit hairs. (I realize that isn’t a component of threading, but I’m still sure it could happen.)

Not long after, I met Rand on the street outside.

He peered down to inspect my face. His brow knitted, and he frowned.

“Don’t worry,” I said. “I suspect it will be back soon. And probably for good.”

For two days, I felt strangely bare, and not at all like myself. Then my skin erupted into a mass of tiny red pimples all over my upper lip, my pores protesting against the violence they’d been subjected to. I’ve been dubbing it my “zit-stache.” By the time it clears up, the hairs will have probably grown back. In the meantime, I’ve been dabbing my upper lip with crushed aspirin to reduce the redness. 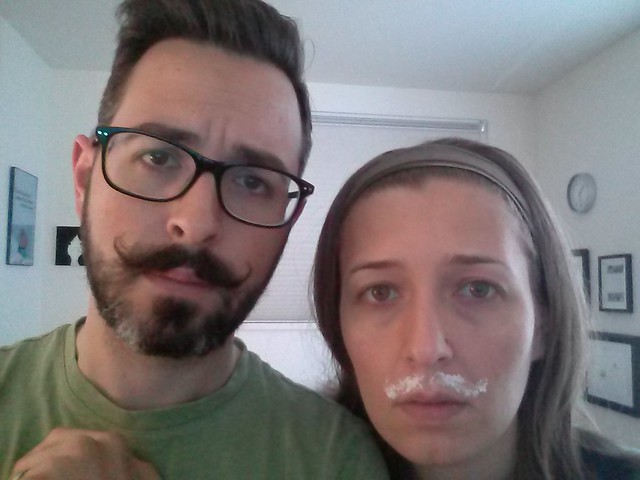 There’s a nice bit of symmetry here, isn’t there?

In the aftermath of all this, I think I’ve learned to leave well enough alone. Some amazing people have had mustaches, like Frida Kahlo and Tom Selleck, basically everyone in The Grand Budapest Hotel. I’m pretty okay with having one, too.

Whether I like it or not, it’s growing on me.

Life at Home, Nothing to Do With Travel, Random Musings