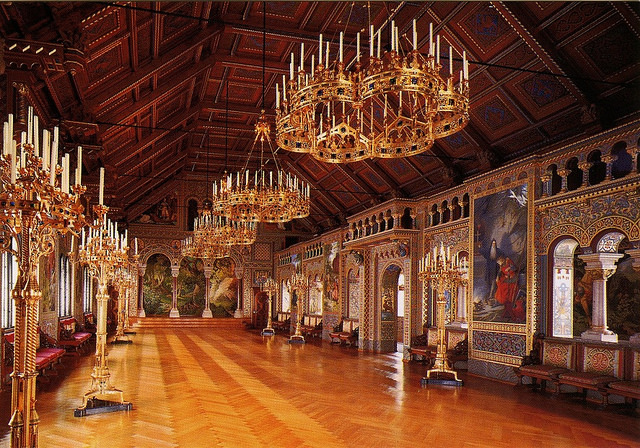 I had been to Neuschwanstein once before, in 2005. I went with my parents. Both of them. 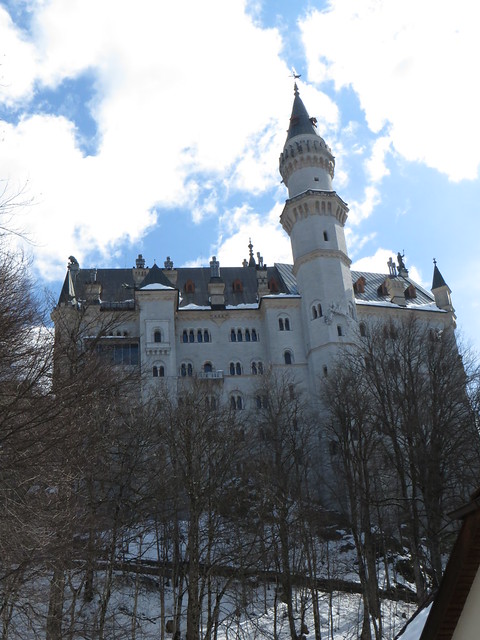 I do not recommend going anywhere with my parents. I love them both – I really and truly do. Without them, I would not exist, and I am such a huge fan of existing.

But good heavens, there are the two most incompatible humans on the planet. I’m not surprised they got divorced. I’m shocked they were ever together.

There are times when, after hanging out with one of them, Rand will look at me and say, “It’s really a miracle that you came to be.”

And I just nod, and know that if time-traveling Deloreans ever become real, I want no part of them, because all anyone would need to do is go back to 1979 and sneeze, and –poof– I’d disappear. My origins feel that tenuous.

Even amidst all my parents’ crazy, though, I realized that Neuschwanstein was a pretty amazing place. So, as you can imagine, I was kind of tickled by the prospect of taking Rand there. And, in true homage to my mom and dad, it was only fitting that the drive to castle was punctuated with lots of bickering. 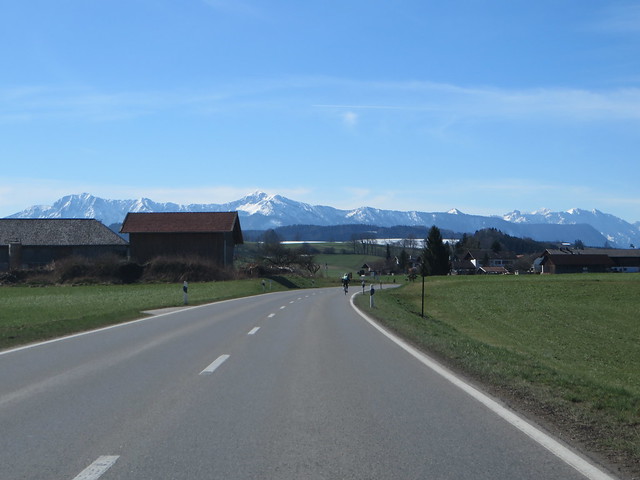 “We should ask someone for directions,” I said.

“It’s … over there somewhere,” Rand replied, gesturing vaguely to a mountainside on our left.

And just as I was about to protest, a castle appeared.

“We don’t know if it’s the right castle, though.”

“Of course it is. How many huge castles are there near Fussen?”

“Seriously? This is Europe. Castles outnumber 7-11s here. People just stop at them to pee and load up on beef jerky.”

We drove on a little while more, and soon another castle appeared – Neuschwanstein (Rand will argue it was the same castle that we saw before, but since this is my blog, I can definitively say that this was a new, different castle). It was easy to recognize, though not because I am familiar with 19th-century Bavarian architecture. No. It’s because it would later serve as inspiration for Cinderella’s castle at Disney. Consequently, its image is burned into my brain. 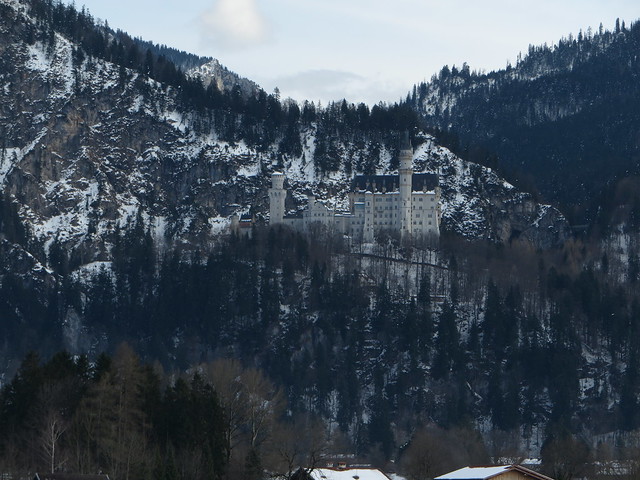 “That’s it,” I said, pointing up to the spires on the hillside. “We should ask someone how we get there.”

“We don’t need to ask anyone how to get there. We can see it.”

“If we ask someone, they will just point and say IT’S OVER THERE.” 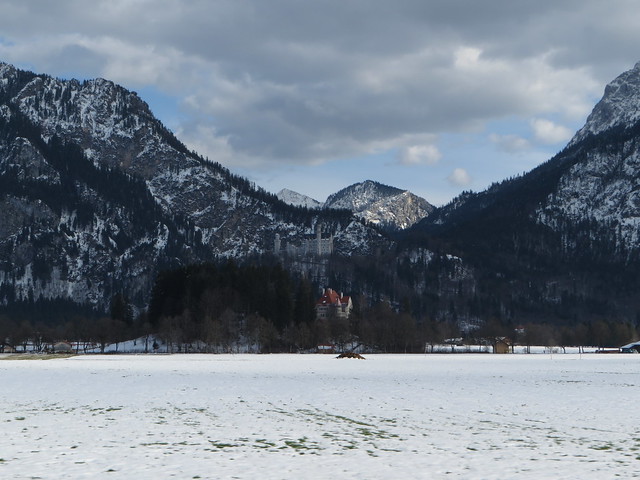 This went on for a while. Since Rand was driving, he won. He just turned down a small road, and started heading vaguely in the direction of the castle. It led right to it, just as Rand had said, though I did feel vindicated that we probably weren’t on a major thoroughfare, given that we had to dodge farm equipment left and right. 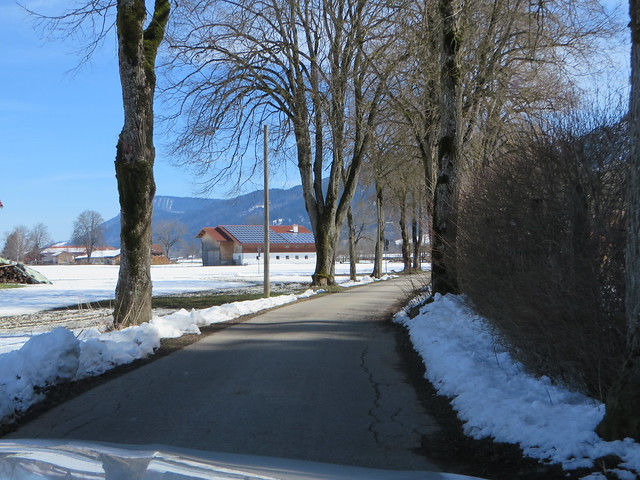 Though to be fair, that’s true of most roads in Bavaria. 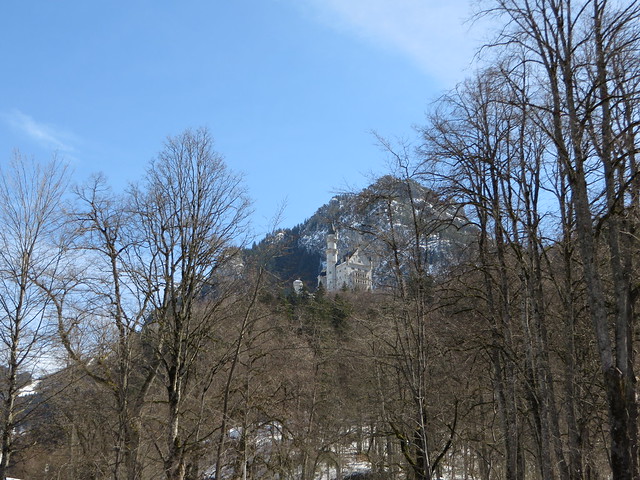 It was a gorgeous day, and understandably quite crowded. The ticketing counter is at the bottom of the hill, the castle up near the top. There are usually buses shuttling people up, but because of the accumulated snowfall from earlier in the week, they weren’t running. There were a few horse-drawn carriages running up and down, but there was a bit of a line for those (and I suspect they cost extra), so Rand and I decided to walk. 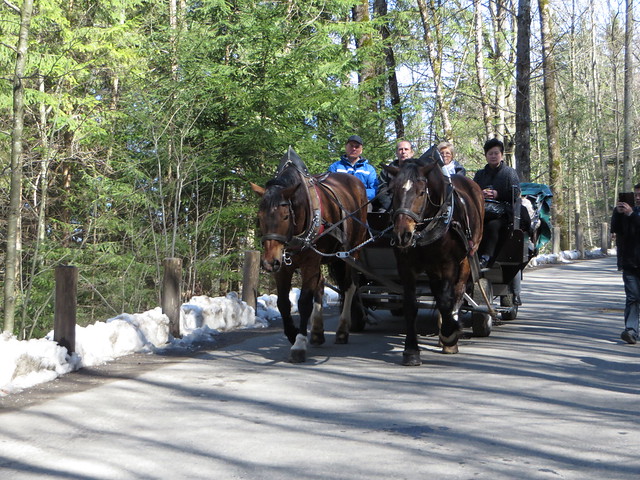 It’s a pleasant trek – slightly uphill, and mostly shaded. Note that you will have to avoid scores of Italian teenagers and piles of horse manure. 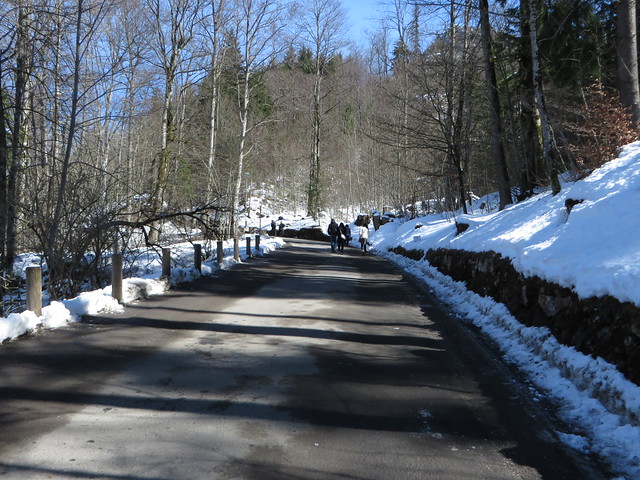 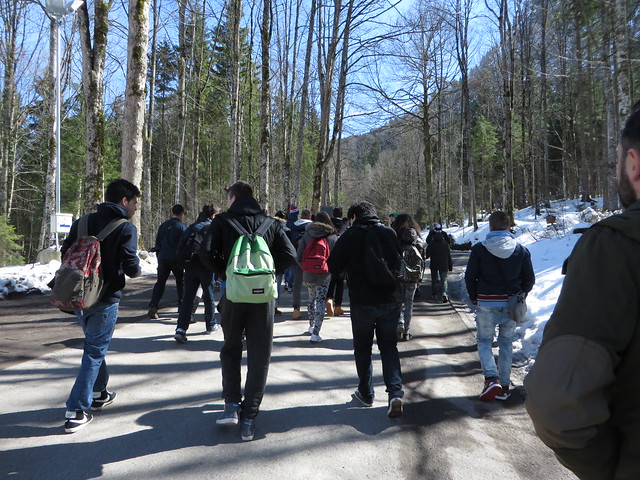 But, again, that’s true of most of Bavaria.

We had some time to kill before our tour, so we popped into the Schlossrestaurant (literally, “The castle restaurant”). It is nothing to blog home about, but in early spring you can sit outside in the sun, snow still covering the ground around you, the castle looming large above. 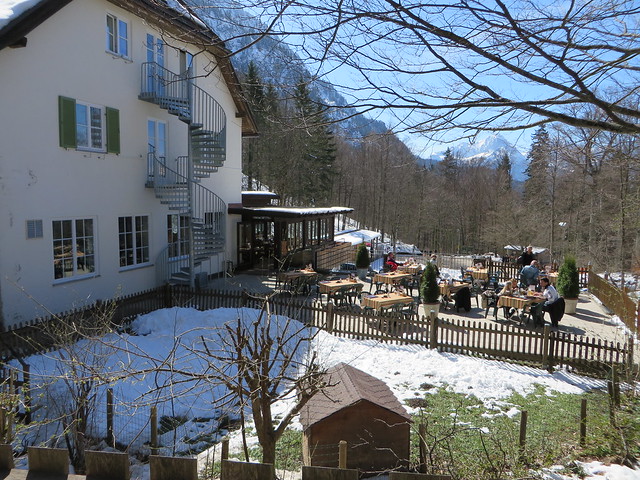 The back patio at the schlossrestaurant. 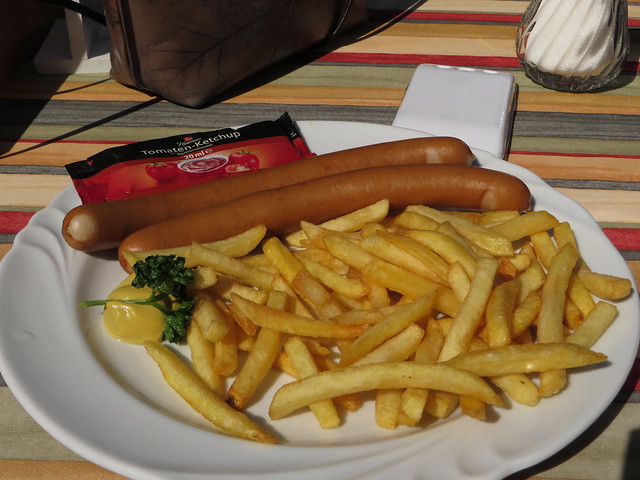 Some rather mediocre frankfurters. 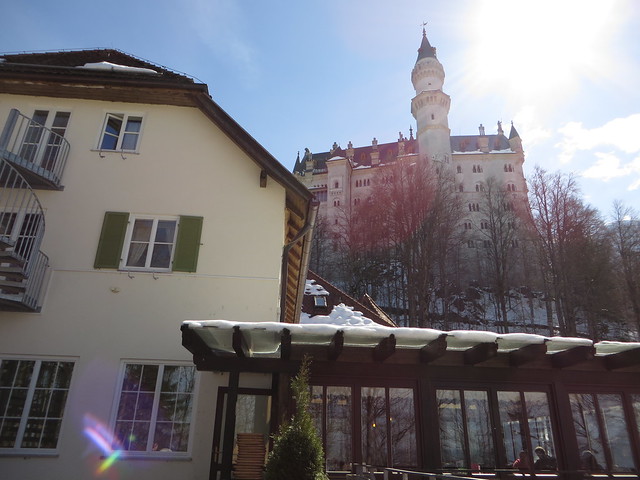 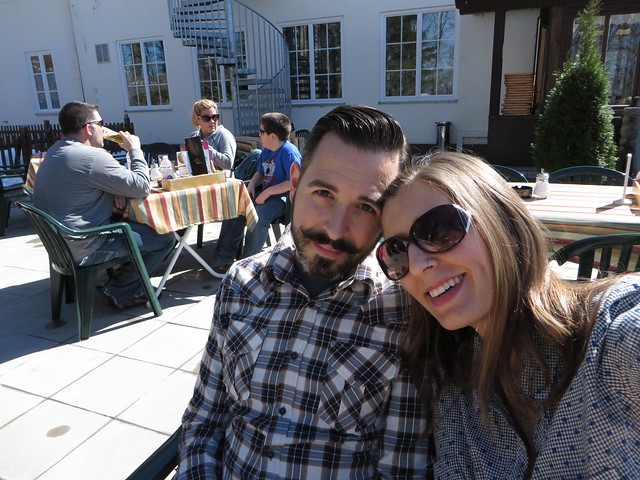 –
In this regard (and not by any culinary measure) it is a wonderful place.

We finished our meal and milled around, waiting for our tour. Regrettably, I only had my small point-and-shoot, so broad, sweeping panoramas of Neuschwanstein eluded me. 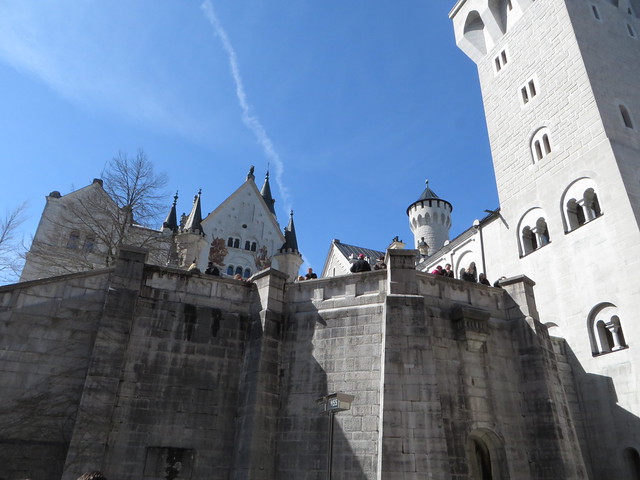 Fortunately, selfies of my husband and me kissing did not: 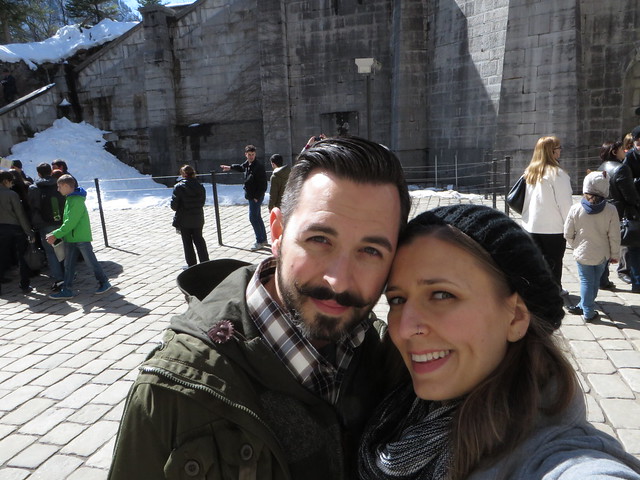 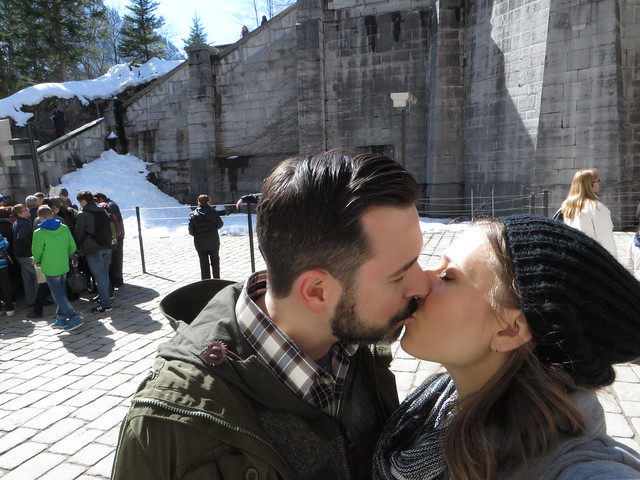 The first time I went on the tour, I remember it taking ages. Perhaps that was simply the influence of my parents; this time around, it was over in a flash. We walked through in no more than thirty minutes.

Time flies when you are happily married and learning about Bavarian history, I guess.

Neuschwanstein, like so many of the tourist attractions in this part of Germany, was commissioned by King Ludwig II. 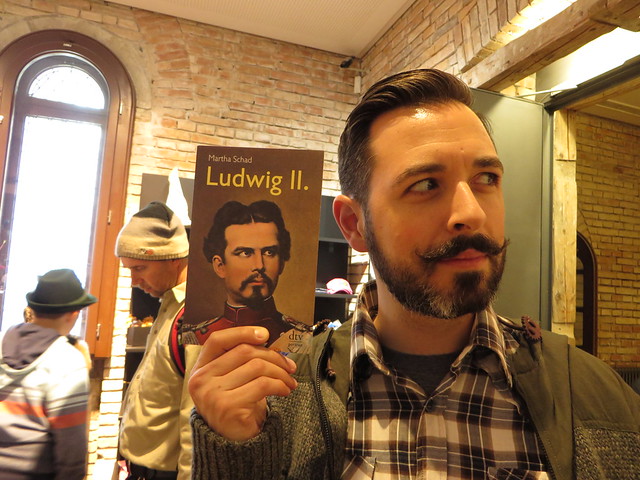 He’s the one on the left. I think. Yeah.

It’s hard not to feel for Ludwig. He was just so … impractical. So fiscally reckless. Like a teenager with a credit card. He spent all of Bavaria’s royal revenue, much of it going into the construction of the castle (as well as two palaces – one of which was Linderhof, which Rand and I had visited a few years ago).

A misanthrope and a recluse, he flipped his days and nights, becoming mostly nocturnal and rarely entertaining guests. The castle staff went to innovative lengths to avoid him, per his request (in Linderhof, the dining table was on a sort of elevator, so that it could be set in the kitchen below, and then slowly lifted into the room above, assuring that the King wouldn’t see a soul).

Ludwig spent only 172 days at Neuschwanstein before he was arrested, having been deemed mentally unfit to be a monarch (a reaction to his excessive spending). A few days later he was found dead in Lake Starnberg. The official report was suicide by drowning, but new investigations reveal that he was most likely shot in the back while trying to escape prison.

At the time of his death, the castle was still unfinished. Six weeks later, it was opened to the public. Ludwig had called the castle New Hohenschwangau (after the name of his childhood home). After his death it was re-christened Neuschwanstein – “New Swan of Stone” castle. The swan was Ludwig’s favorite animal, and is the official symbol for the surrounding region. The motif can be found throughout the castle.

Photos inside Neuschwanstein are prohibited, but I scanned a few postcards of the interior. The entire place is positively covered – tapestries on the walls, mosaics on the ground, carvings everywhere. This was the king’s bedroom: 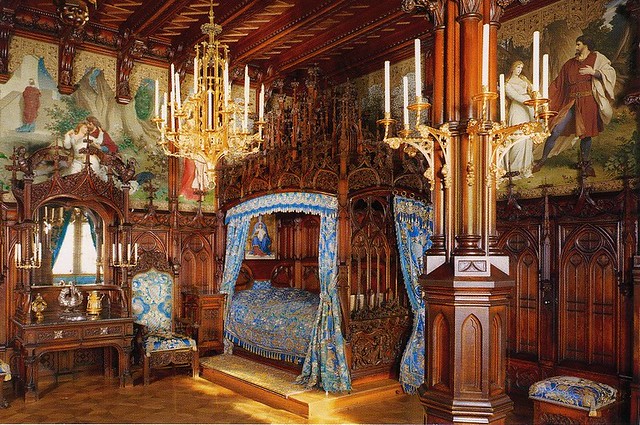 It took fourteen carvers four years to finish the woodwork in this room alone. The natural pressure from the melting snowpack meant that the sink near his bed had actual running water. As for the bed itself, I had a little self-indulgent chuckle after I observed that it wasn’t all that big.

Not even the king had a king-sized bed in those days.

This was the throne room. Notice that the throne itself is conspicuously missing. It was never finished. 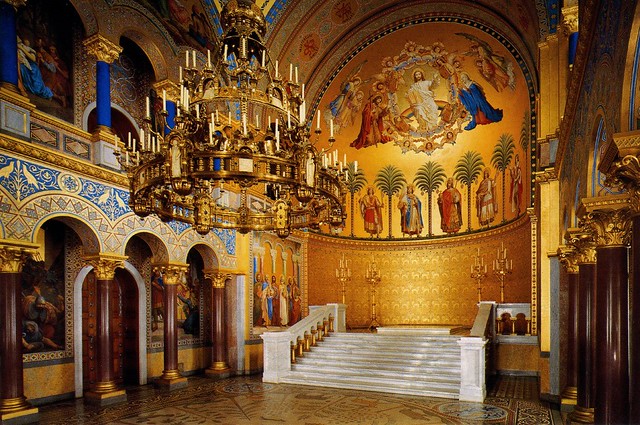 Ludwig was a huge fan of Wagner – tapestries depicting scenes from his operas can be seen throughout the castle. But no where was his love for the composer more apparent than in The Great Hall.

The room was designed with acoustics in mind. There is a stage at one end, painted specifically to be a set for Wagner’s Parsifal (The Legend of Percival). The opera was only performed a handful of times in the castle before Ludwig’s demise. (Note: if you wish to read extensively about Wagner and the influence of his works on both Ludwig and the architecture of Neuschwanstein – and who wouldn’t? – I suggest you take a gander at this.) 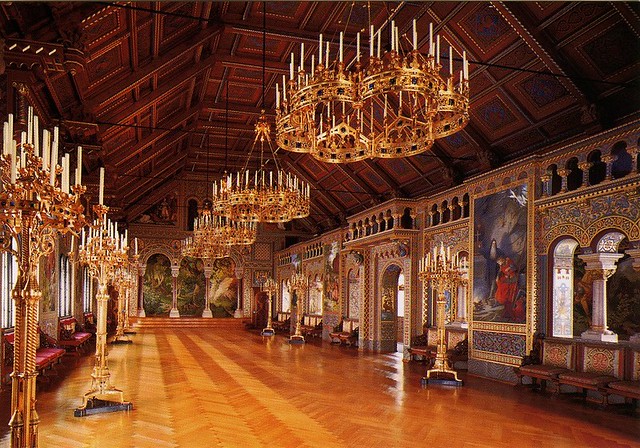 And while the interior was lovely, I think the best part of the castle might have been the views. 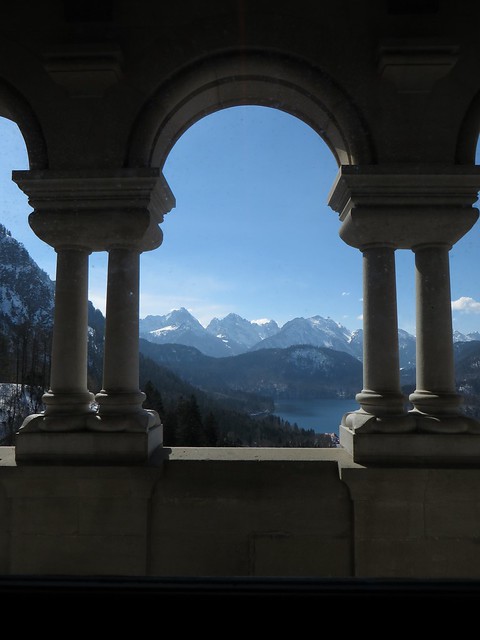 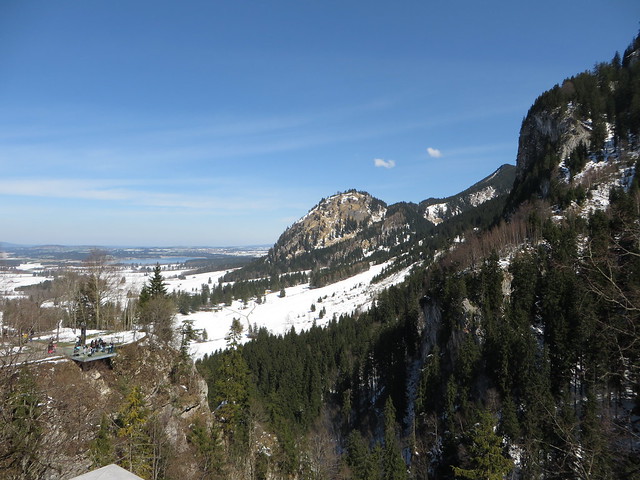 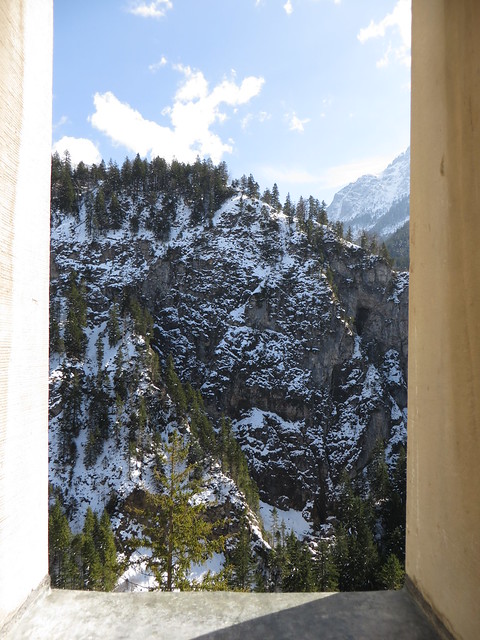 I didn’t remember the vistas from my first visit to Neuschwanstein with my parents all those years ago. Then again, it might be that in order to appreciate the panorama, you have to stop bickering. 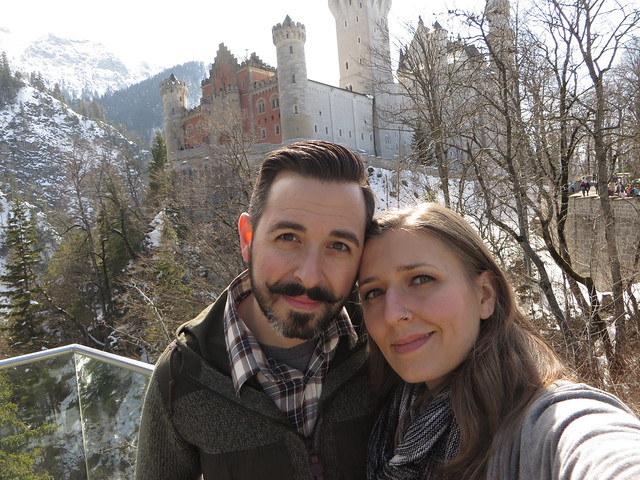 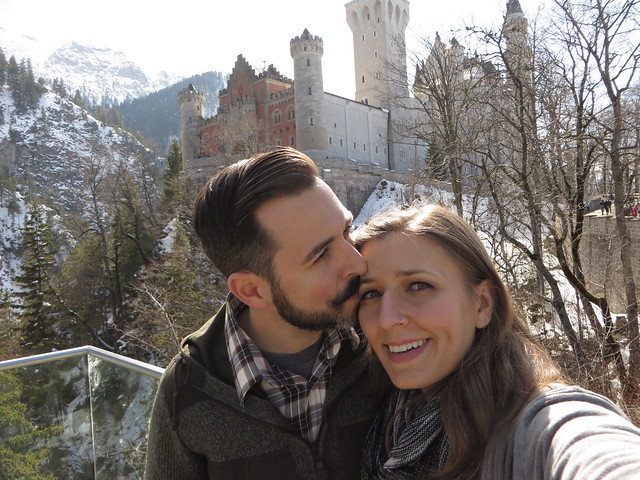 For a little while, at least.

The Essentials on Neuschwanstein Castle, Germany: