I’ve learned that certain things which may be considered totally acceptable in one country aren’t okay in another. That customs and cultures don’t necessarily translate. Even the things that we find to be horrifically offensive aren’t universal.

Recently, I visited my family in Italy. I got to talking with my cousin, and she explained to me that the term “finocchio” (literally: fennel) is an offensive term to describe someone who is homosexual.

“You would never, ever use it,” she said, her green eyes wide.

It’s a reminder that words have power, that even something innocuous can be offensive if you are crossing cultural lines. 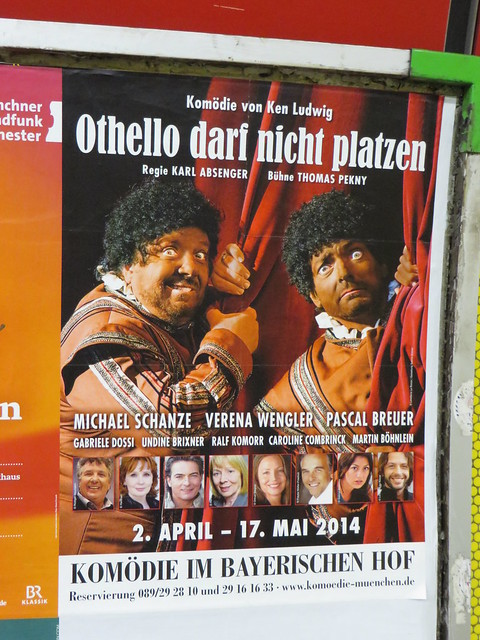 That is a poster for a recent production of a play (“Othello darf nicht platzen” – literally, “Othello may not burst”) featuring two white guys in blackface. When I saw it in the Munich subway, I found myself just staring blankly, my mouth hanging limply open.

It’s profoundly offensive, right? And just when I started getting all self-righteous about it, ready to start lecturing Bavarians on cultural sensitivity, I found out something else.

It’s an American play. It was written in the 1980s. And the characters you see on the movie poster are supposed to be in blackface. That is an actual fucking component of the play. This is the shit we are exporting to other countries.

The original name of it is “Lend Me a Tenor”. The plot is this: a famous white opera singer is about to play Othello (which is already problematic – see Laurence Olivier), but he somehow gets knocked unconscious. So a hapless young man is smeared in blackface and sent onto the stage in his place. The young man does a convincing job, but then the opera singer comes to, and there’s a bunch of ridiculous confusion as to who’s who and WE ARE GETTING AWAY FROM THE POINT THAT THERE ARE WHITE GUYS DRESSED IN BLACKFACE IN 2014 AND THAT IS FUCKED UP.

What bothered me even more, though, was that the play seems to be fairly popular (it’s been performed in 25 countries and translated into 16 languages), and yet I found very few articles that addressed the fact that the premise is problematic, at best.

One reviewer described it as “clean humor” and went on to extensively explain that the blackface was not offensive at all (by … quoting Wikipedia? I just … WHAT).

And then I realized: nothing is universal. Take something that the vast majority of people find appalling, and after a bit of searching, you’ll find someone who isn’t bothered by it at all.

Some people like “Lend Me a Tenor.” That doesn’t mean the play isn’t antiquated or that blackface isn’t offensive – regardless of what country you’re in.