This was the interior dining room at the Hotel Santa Caterina. We ate breakfast here only once, when a light rain was falling. 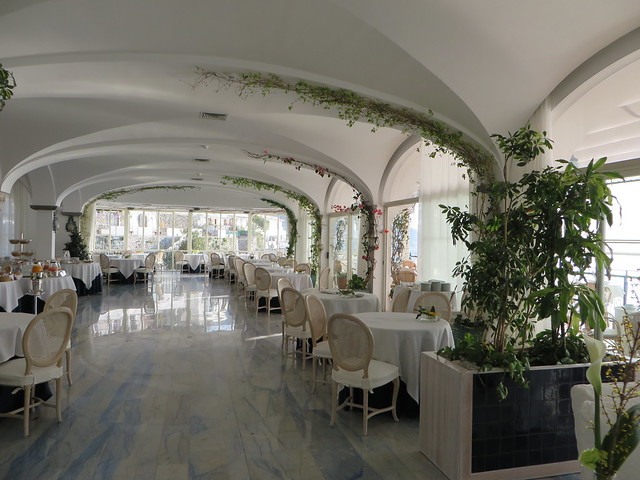 On all the other mornings, we ate breakfast on the adjacent terrace. 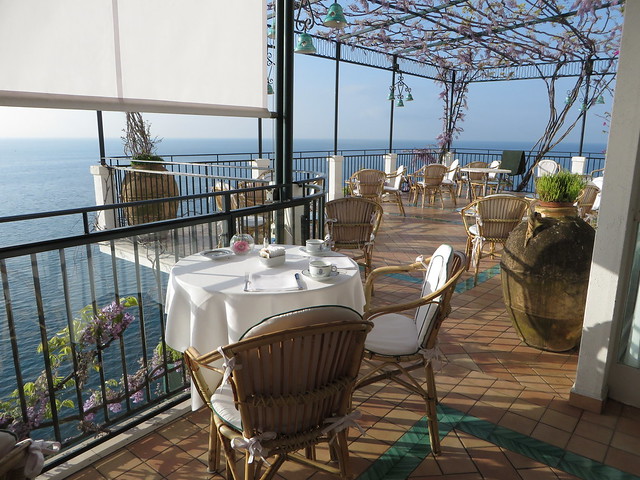 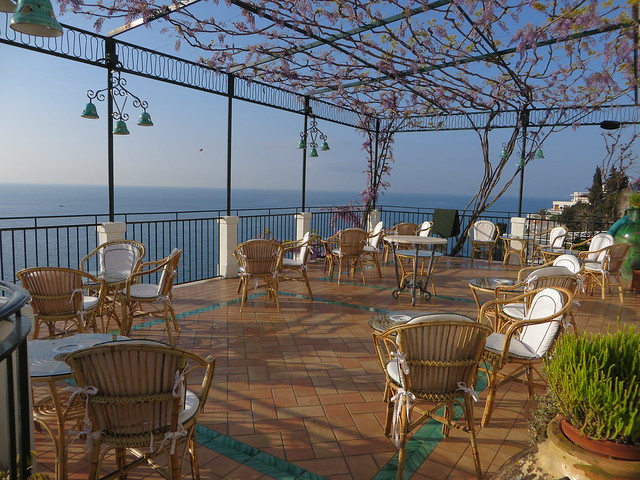 And we were perfectly happy about this. 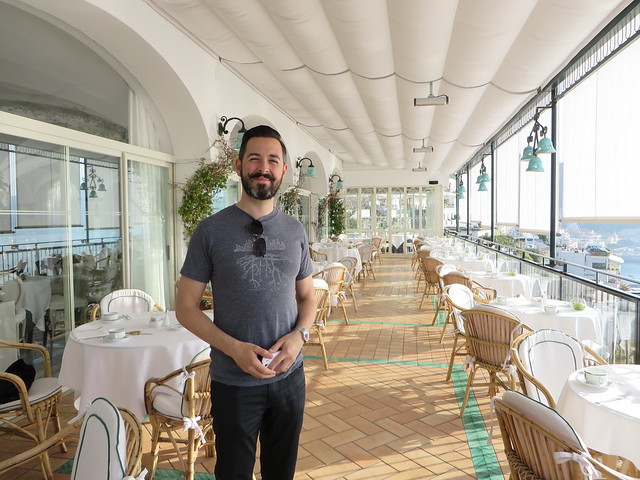 The face of a man who knows he totally nailed the whole “getting an awesome hotel” part of our trip.

It looked like something out of a fairy tale, except that instead of instead of talking mice and cartoon birds that braided your hair, there were lizards, and also mating cats. 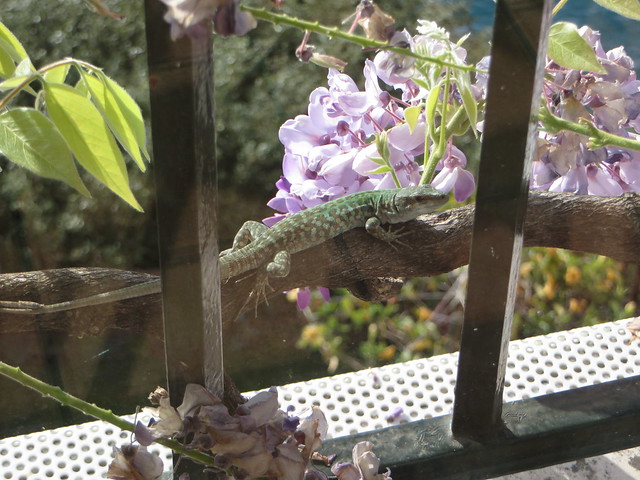 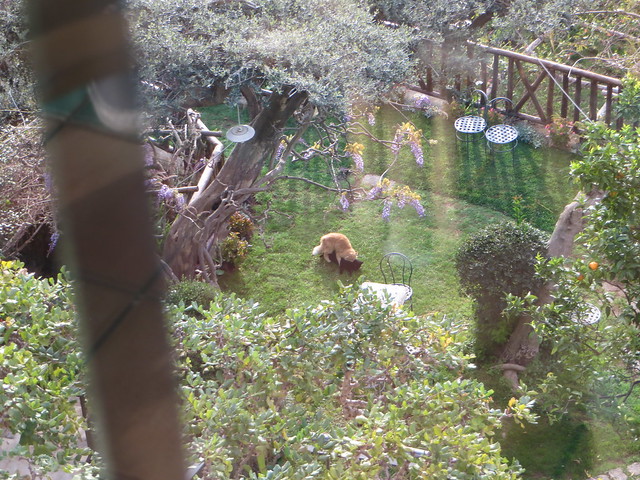 Somewhere, Bob Barker is looking down on this scene and weeping.

The staff was a cadre of dark-haired gentlemen in white coats who refilled coffee cups and whisked away dirty plates with ninja-like stealthiness. They were so over-the-top in their hospitality, that we began to politely decline it. 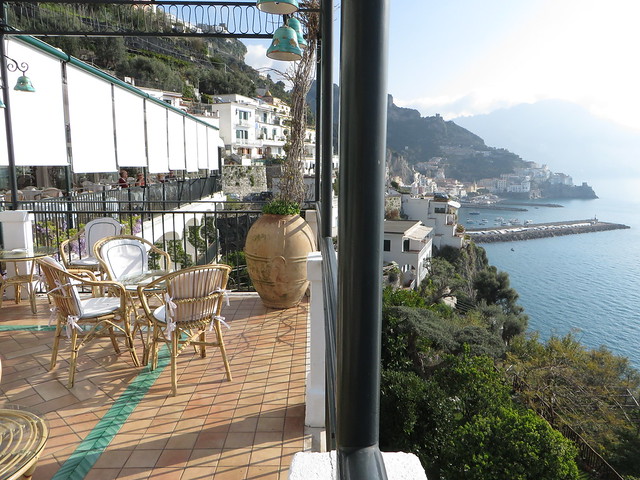 “Honestly,” I said gently to one, “I can carry my coffee cup back to my table myself.”

Once they realized we didn’t want them to fuss over us, they became even more delightful. One of the white coated men enlisted the help of his colleague to carry a tiny plate of mine, while I followed, blushing and mortified. It was wonderful and ridiculous, and they let us feel like we were in on the joke. 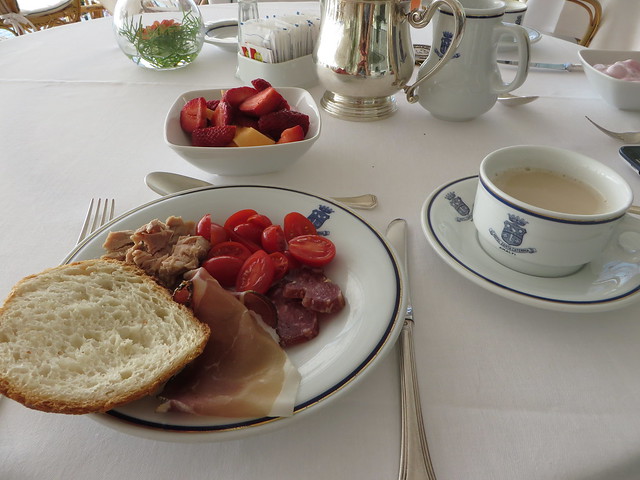 I think four gentleman carried these plates to the table, despite my insistence that I could do it on my own. I made them swear they’d not tell my mother. Thus far, they’ve kept their promise.

Breakfast in Italy is not usually a big meal. A coffee and a biscuit is often sufficient. This was a difficult concept for Rand to get used to. The table full of pre-packaged cookies amidst the rest of the breakfast foods was positively baffling to him. I just saw it as catering to the locals. 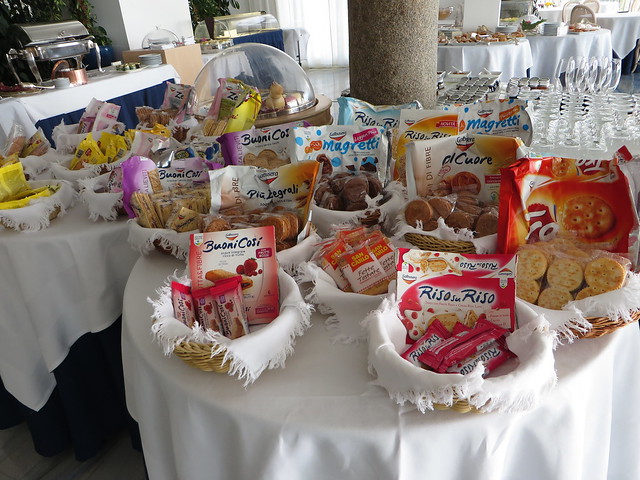 After all, I was 8 or 9 years old before I realized that people consumed more than a biscotto for breakfast, and that it was entirely normal to sit down to a massive meal of bacon and pancakes at 8 am (for the record, the Hotel Santa Caterina offers these, as well).

Jet lag meant that we often woke up starving. Each morning, we’d try to find a balance between the solitary biscuits that sustained the Italians, and the massive plates of sausage, eggs and toast that our fellow tourists had in front of them. 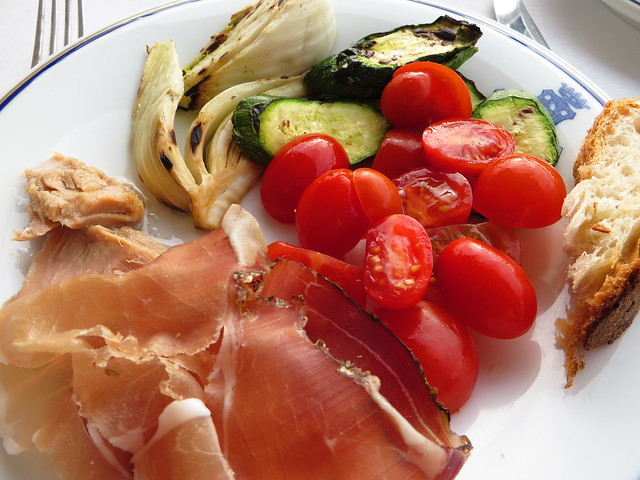 I’d say we did a decent job.

Until I saw the table full of pastries. 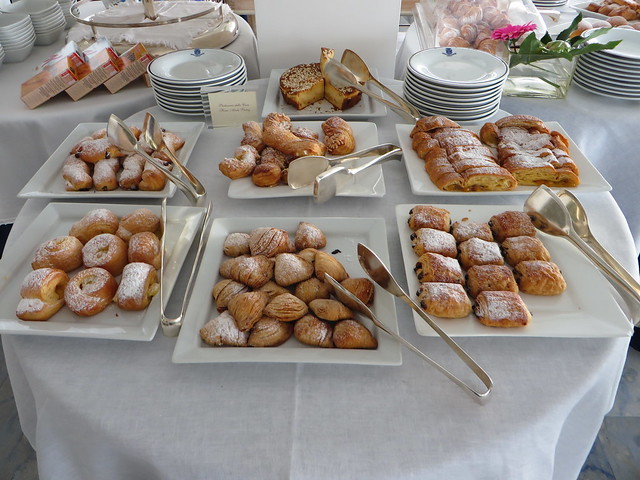 It took the better part of my willpower to not eat the entirety of it. 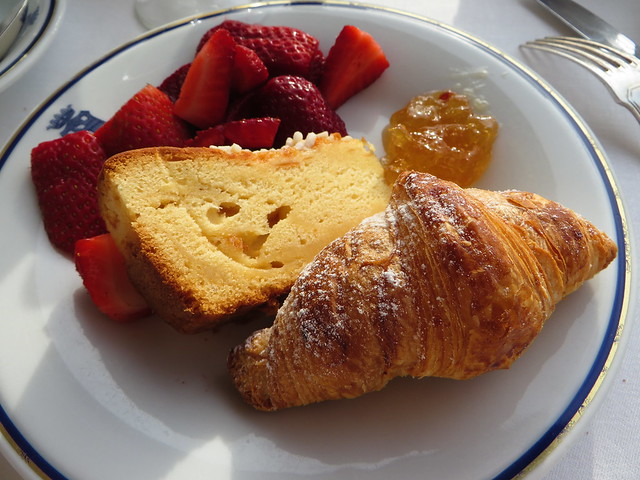 See the glob of jelly in the upper right-hand corner? That was homemade sour lemon marmalade. It blew too-sugary storebought orange marmalade away. So much so, that I’ve pretty much forgotten that the orange version even exists.

Those breakfasts at the hotel were so amazing, I started to understand why our days in Amalfi always felt a little lackluster. Don’t get me wrong – we had a wonderful time on the coast. Our days were lovely, the nights romantic and candlelit.

But every morning we sat outside, and looked at the water (and the occasional pair of amorous cats). We drank cappuccini brought to us by charismatic men in white coats, and ate sfogliatelle (with a dab of the only marmalade that should exist), and exchanged looks with one another that said, “Can you believe this?”

And really, it was hard to compete with that.