At some point, all of the cities on the Amalfi coast started to blur, so I hope you’ll forgive me if I resort to describing all of them as “lovely” and “charming” and “like a tower of colorful stone blocks precariously piled one atop the other.” 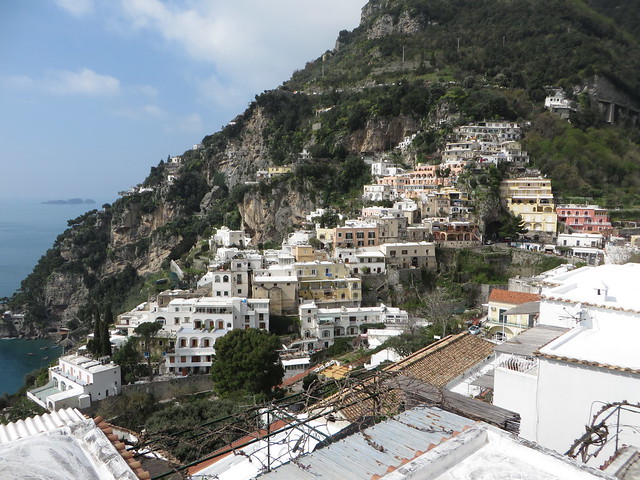 Positano. But it could be anywhere on the coast.

But, see, they all were.

Positano, though, stands out in my memory from the rest, and I’m not entirely sure if that’s a good thing. Because the part I remember most about Positano were those steps.

So. Many. Fucking. Steps. 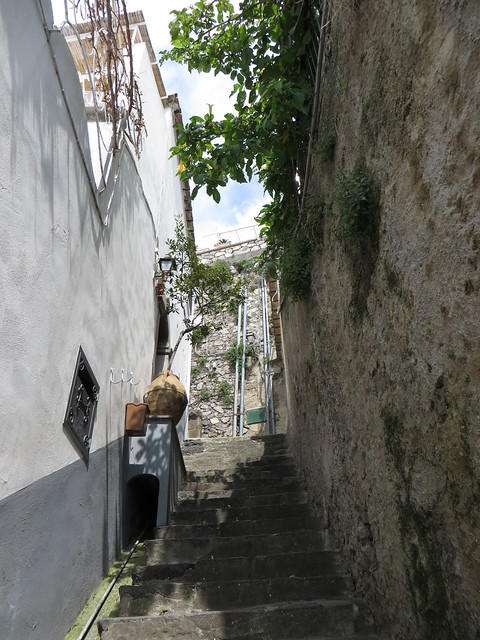 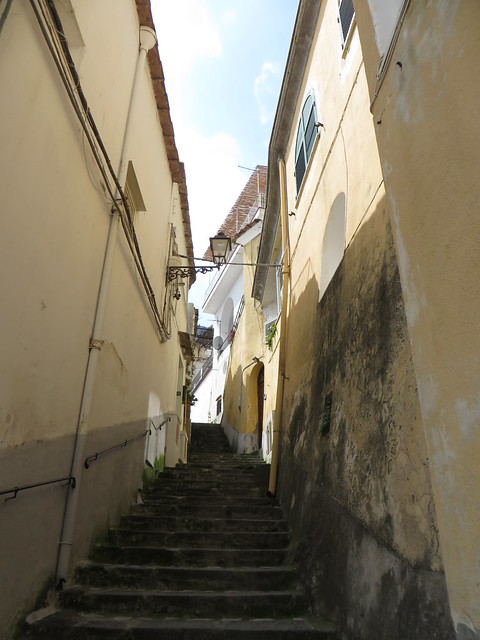 Seriously, it’s like the entire town was built to prepare future generations for the Stairmaster. You climb and you climb, and you start to think that you must be nearing the top. That there is no way there can be any more steps, because there’s no place to go and there’s nothing left with which to build. THEY’VE CLEARLY USED UP ALL THE RAW MATERIALS FROM WHICH A STEP COULD CONCEIVABLY BE CONSTRUCTED.

But then you turn a corner and dear god, there they are. More steps. 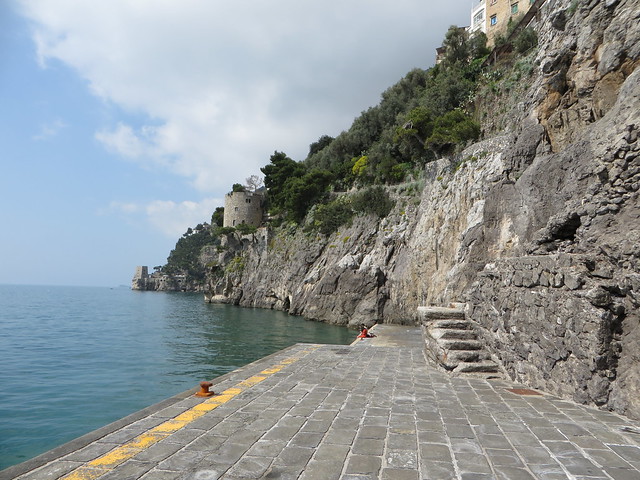 Are you seeing this? The stairs on the right don’t even GO anywhere. It’s like someone said, “You know what this wall needs? STAIRS.” And they added them, because fuck it. Stairs.

I should have seen this coming. I know I always say that, but this time I really should have anticipated it, considering that we parked near the top of Positano, and walked down the steps in the first place. At some point, as we were gliding down those little stone platforms, I should have paused and turned to my husband and said, “This is a terrible, terrible idea.” 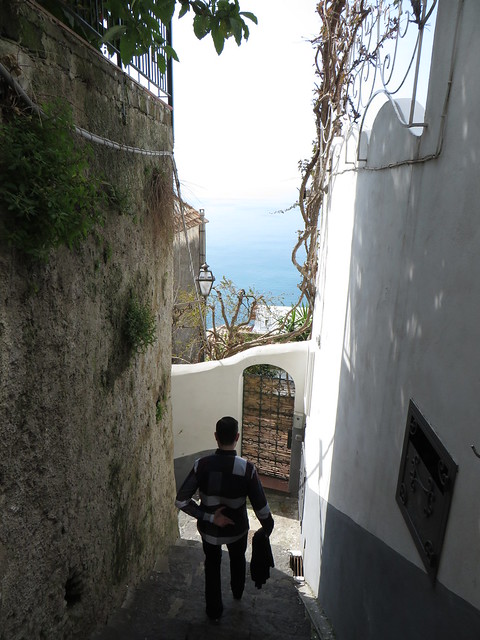 STOP IT, RAND. THIS WILL BE OUR UNDOING.

Because every single step that we raced down would come back to haunt us, three-fold. I know that it’s entirely impossible. That there’s no way we had to climb up more stairs than we ran down. And yet, I’m near certain that we ran down a flight or two at most, and we climbed at least 15 or 16 THOUSAND more flights on the way back. 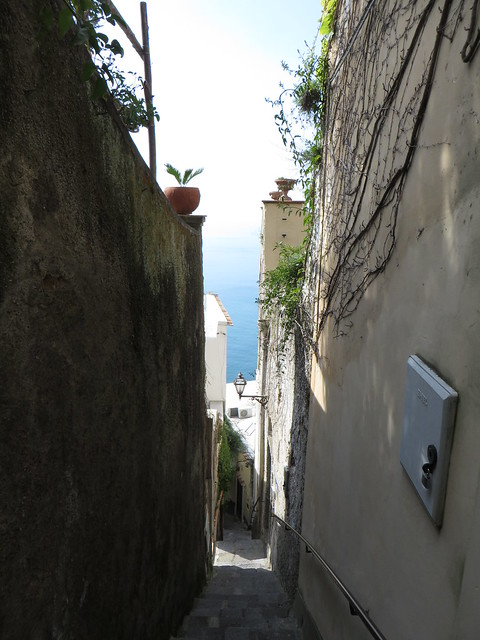 It was like The Hunger Games when Katniss was trying to stay alive and doing a pretty good job of it but then Seneca Fucking Crane started adding trees and crazed mutant dogs to the arena WHICH WAS TOTALLY UNFAIR. My point is: I’m fairly certain that some gamesmaker was adding more and more stone steps around every corner. I kept looking to the sky hoping someone would send me a little  parachute package of cupcakes and lemonade BUT NO ONE DID. 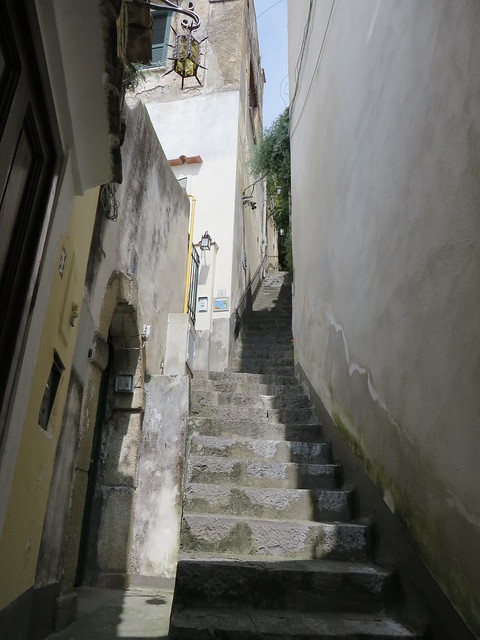 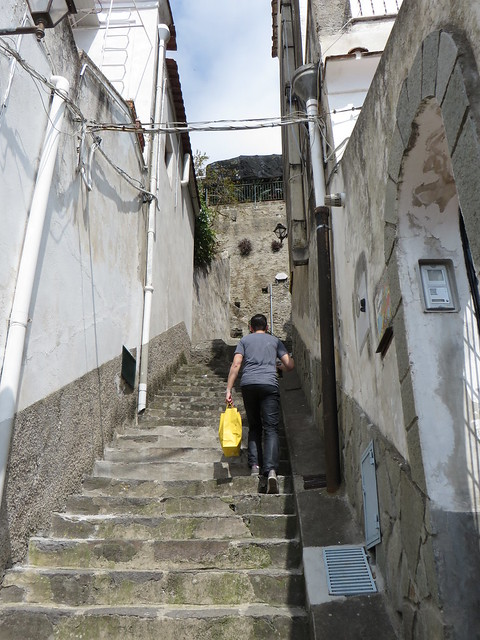 At least the views were good. Bow-chicka-wow.

Of course, there is plenty to love about Positano, and I’m probably being horribly unfair. Look how delighted we were when we first got there, before I swore a lifelong vendetta against whatever ancient city planner decided to build everything VERTICALLY: 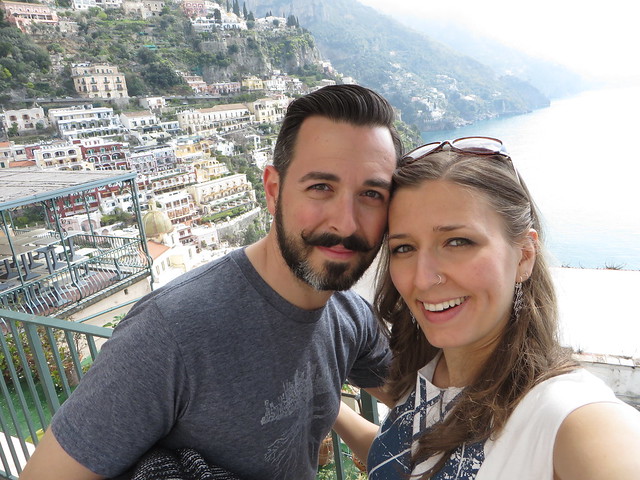 It is a beautiful little town, and the beach is charming. When we went it was basically empty, presumably because all of the others tourists died of an overdose of steps. 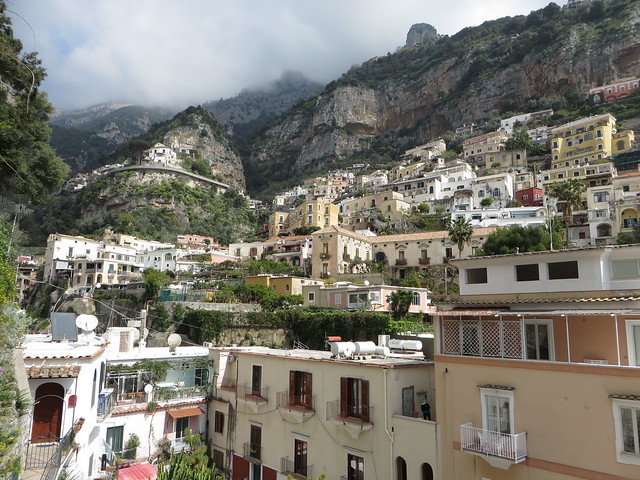 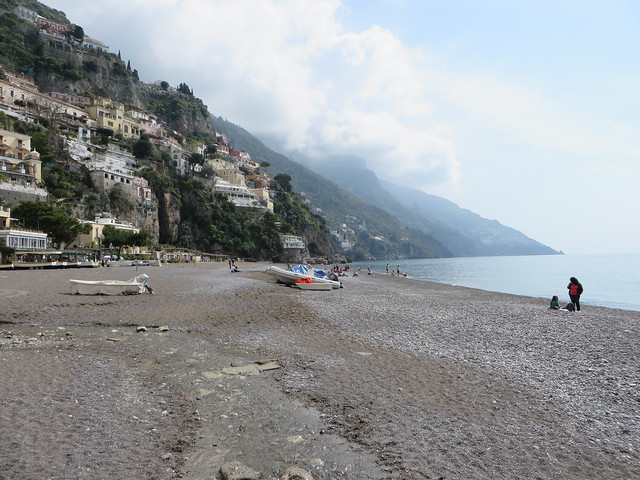 I didn’t see too many locals, either, for that matter. They were probably off somewhere watching hidden camera footage of us as we heaved up flight after flight. I’m fairly sure that after living there for generations, the population has evolved into a lean bunch of stair-climbing machines, with thighs that could crack walnuts. 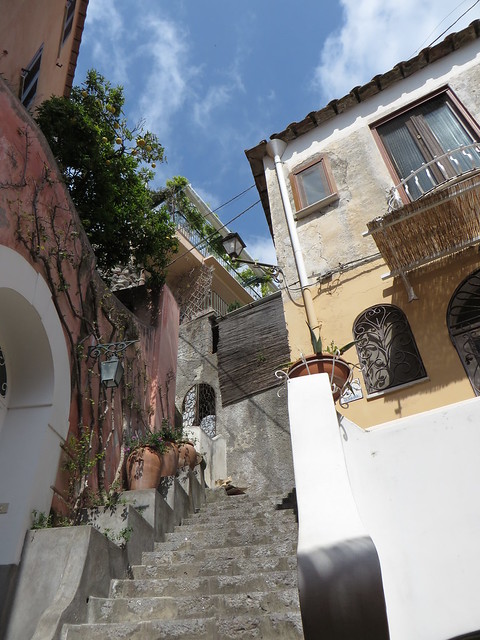 I can’t say for sure. I know only this: I will remember Positano. Or at least, I’ll remember its steps. All fucking 3 million of them.