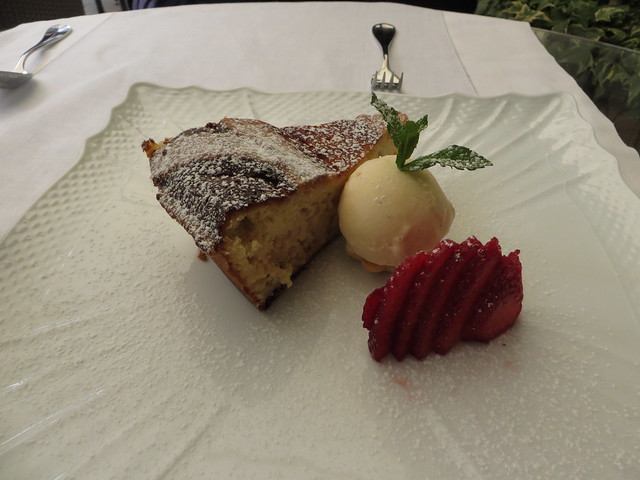 Good thing I don’t drink, or we would have had to sell my car to afford it.

We should have learned from our experience back in Frigento that Google Maps could not be trusted in Southern Italy, but it was around the time we reached Positano that the lesson hit home. We’d spent the better part of the afternoon looking for a restaurant that Rand had read about, and found that it was nowhere near where the map had said. In fact, it didn’t even seem to be in Positano.

So we struggled to find another restaurant that came well-reviewed, but it had yet to open for the season. Another was open, but when we came in, we were told that they weren’t actually serving food until the following day (this baffled me, and I was at the point of hunger where I wanted to sit them all down and explain to them how Capitalism worked, but Rand wisely led me away).

We found ourselves once again exhausted and starved. It had started to become the theme of our trip to Southern Italy. We were going to be the first people in the history of time to visit this part of the world and actually lose weight.

In hindsight, Ristorante Max was not ideal. It was far fancier and expensive than we’d have liked. I’d have preferred an osteria or trattoria – something a little bit more casual and affordable. But Ristorante Max had several things going for it that the other restaurants we’d been looking for did not.

Namely: It was actually in Positano, it was open, and they were serving food. 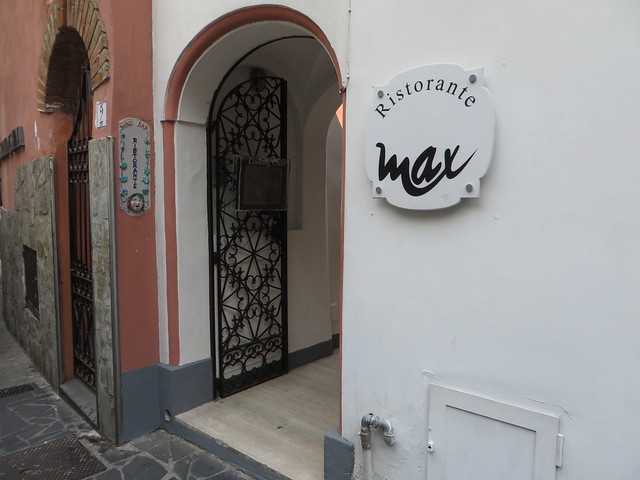 We sat outside on the back terrace, and listened to the low hum of buzzing insects, eavesdropped on the conversation that was going on at the only other occupied table, at the other end of the patio. I noticed their clothing, caught enough of their talk to piece together that they were very, very wealthy. 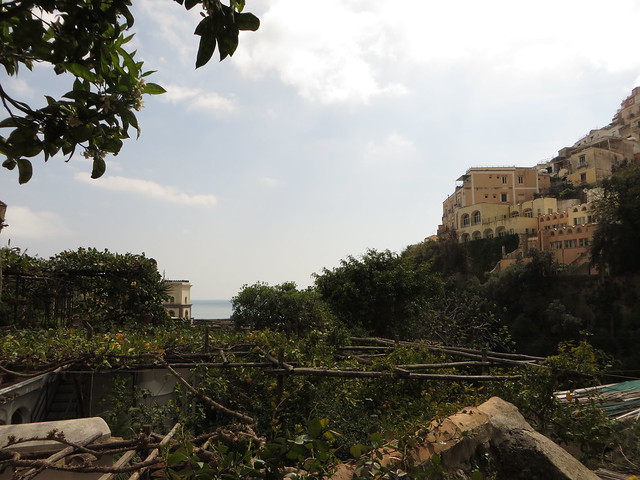 The view from the back patio of Ristorante Max.

I opened the menu, and my suspicions were confirmed. Ristorante Max is absurdly expensive. I tried to still my heart, while Rand shrugged.

“It’s not like we have too many other options,” he said. “We’ll make sure dinner is cheap.” 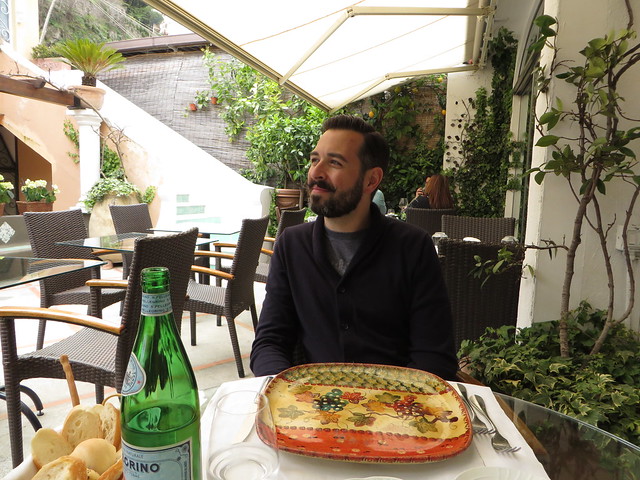 I nodded. And every other dinner we have for the rest of our lives, I thought, while I demolished the bread basket that had arrived at the table.

As we ate, I began coming up with crazy schemes to cover our bill, none of which were even remotely rooted in reality. Among them: I could seduce the wealthy older gentleman at the next table, and convince him that he had to at least buy Rand dinner if he was going to steal his wife (I really didn’t think this one through). I could confront the owner and explain that I was his illegitimate daughter (so many problems with this one, not to mention the fact that the owner could be a woman). I could accidentally shatter my plate and cut myself on the shards, necessitating a mad dash to the hospital (No. What? Just no).

In the end, I reasoned that paying the bill was probably better than having to cheat, lie, or cause myself serious bodily harm.

The good news was that, pricey as it was, Max was very good. The dishes were creative while still remaining true to their southern Italian roots. There was a strong emphasis on seafood, and everything that arrived at the table was rather lovely and well-composed.

We split a salad as a starter. It was becoming a habit. 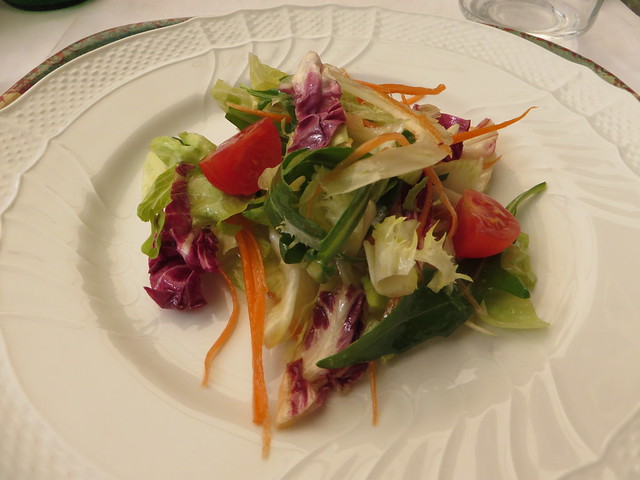 Rand ordered the seafood pappardelle, which was gorgeous. The flavors were surprisingly delicate. I think it cost something like 25 euros. 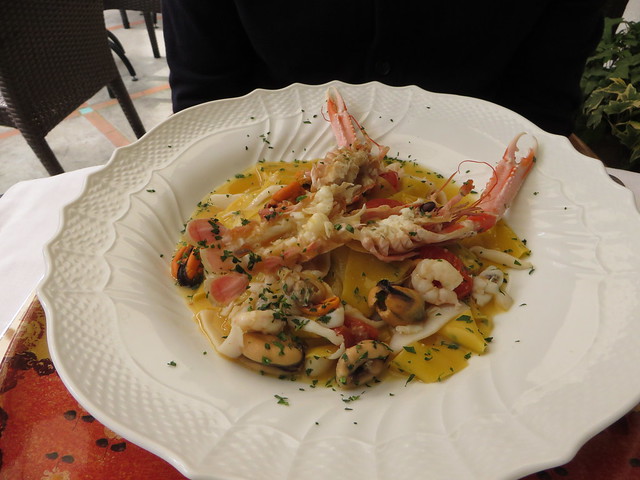 I got this little quartet of pastas, which was beautiful but not nearly substantial enough. 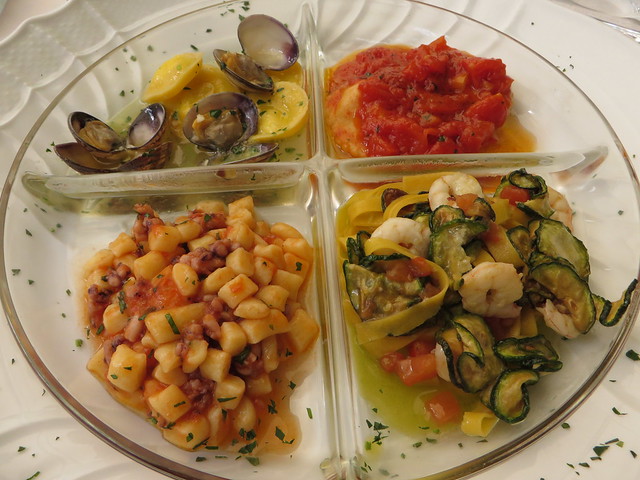 So we ordered dessert (because at this point we’d spent so much money, I was now beyond panicking. The numbers had ceased to have any meaning). We split a slice of ricotta cake. It was rich and dense, and lightly flavored with orange zest. 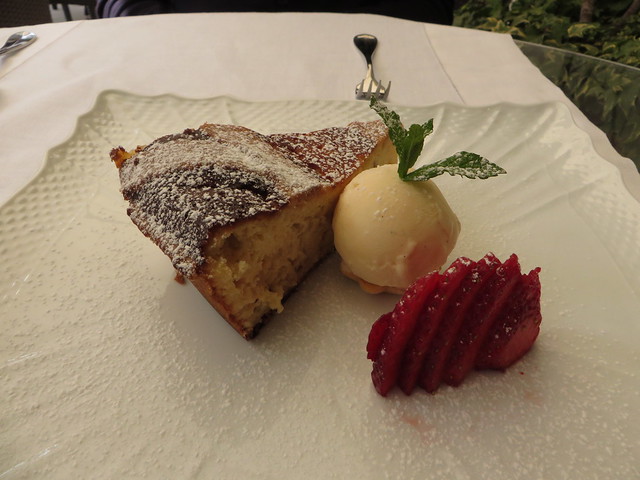 We demolished every bite, not simply because we were starving, but also on principal – after all, every bite was a couple of euros.

Before we left (final bill for 2 primi, one salad, one dessert: 75 euros), I popped inside the restaurant to use the bathroom. The interior was beautiful and entirely insane. It’s what I imagine the house of a very wealthy crazy person would look like. 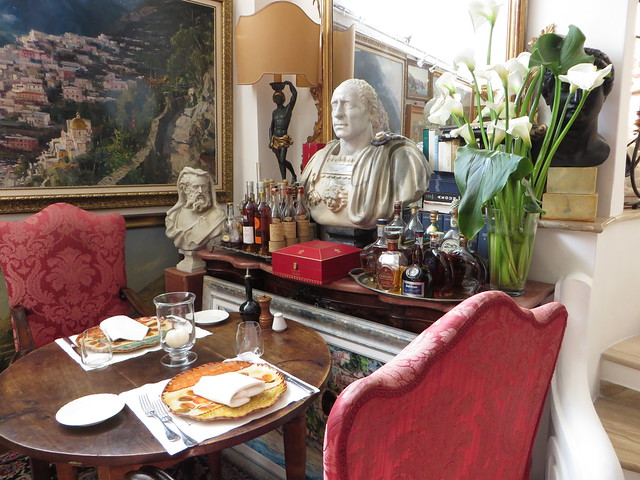 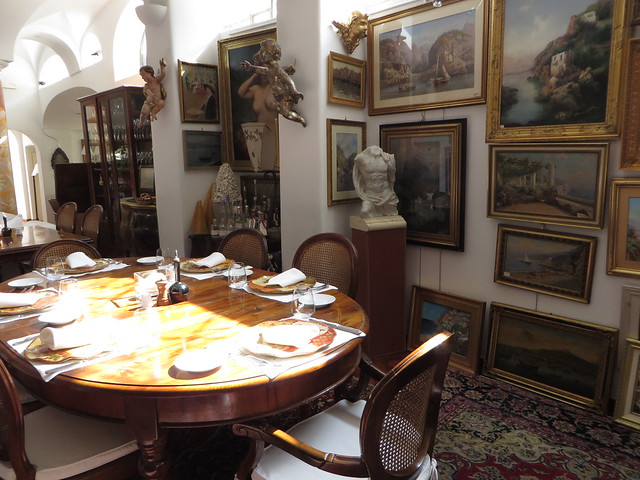 Which, if you think about it, made perfect sense. After all, who else could afford to eat there?