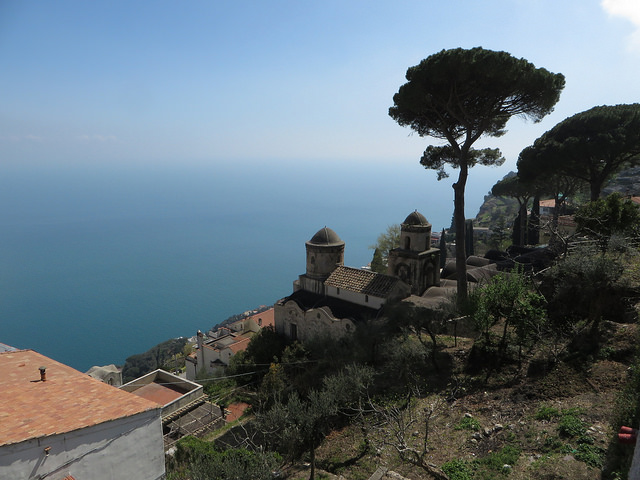 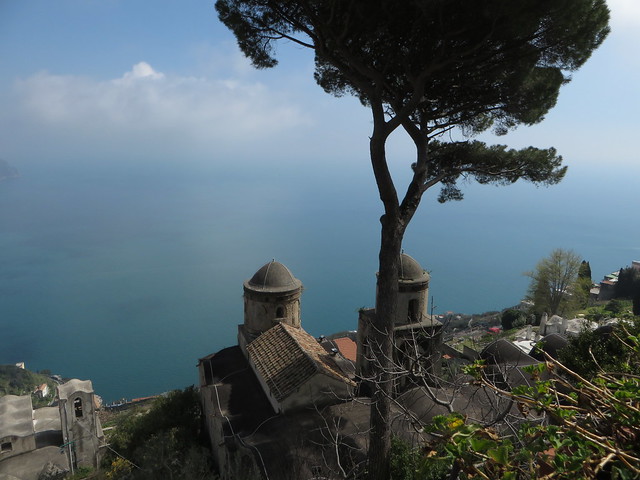 Ravello sits just behind Amalfi, further inland and up the mountainside. You can get there by walking, I suppose, if you don’t value time or your life all that much. The more practical options are to crowd into a bus with a bunch of local kids who don’t understand capacity limits, and tourists who don’t understand Italian (so that when you are screaming, “Per favore, fammi uscire!” they stare at you with blank looks until you yell, “I NEED TO GET OFF THE BUS.”); or you can get swindled by some cab driver.

Rand and I tried both of these latter methods of getting to and from Ravello. (If I find that cab driver again, I will punch him in the throat. I should have argued with him more. He actually had the gall to try and get us to hire him as a private car for the weekend. I replied to him using the polite third-person, saying that I had already paid him a weekend’s worth of fares, and walked away. Reminder, kids: even experienced travelers who speak the fucking language fluently can get fleeced. Damn it.)

If we were to do it again, we’d take the bus. Without question. I might have had my face firmly nestled in the armpit of an Englishman who hadn’t met a stick of deodorant in several days, but at least I wasn’t being overcharged for that privilege. 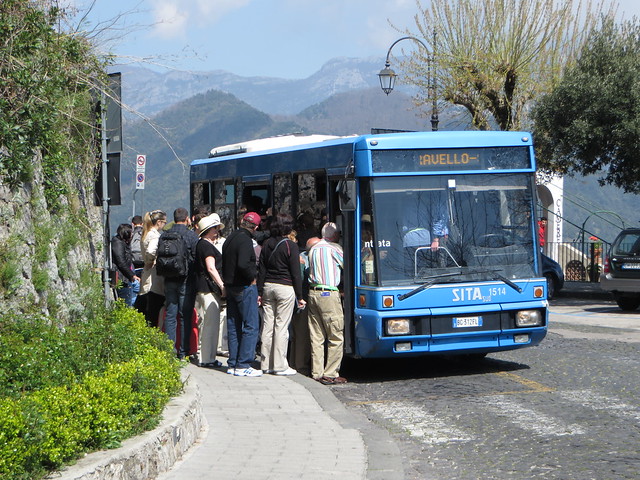 The uncrowded (by comparison) bus back to town.

Besides, the drama of getting there would just prove to be the storm before the calm: Ravello is lovely and peaceful, and it featured Rand’s absolute favorite part of our entire trip to Amalfi – Villa Rufolo. 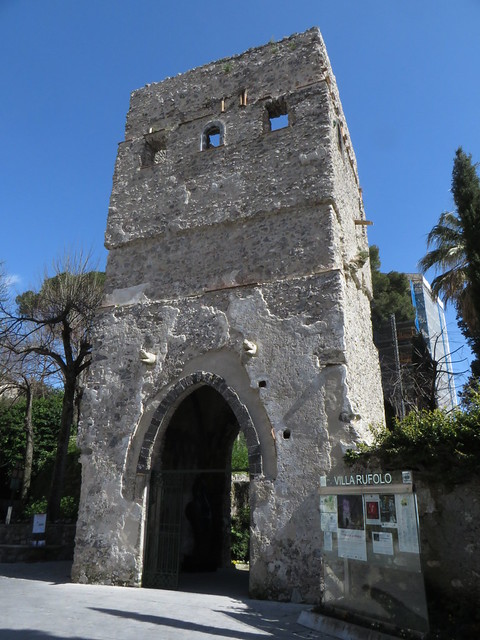 The building sits near the cliffside, surrounded by tiered gardens that overlook the water far down below. The Rufolo family built the villa, which, during its heyday in the thirteenth century, boasted “more rooms than there are days in the year.” The property changed hands repeatedly over the centuries, each new owner adding to it, so it is now a pastiche of 18th century cloisters and 19th century gardens against a backdrop of the ancient ruins. There are even modern offices, performance halls, and galleries in several of the buildings. In the summer time, you can see a concert or wander through an extensive art installation. 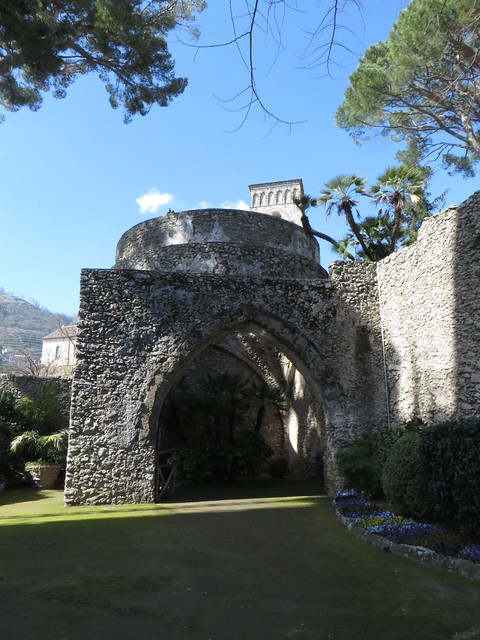 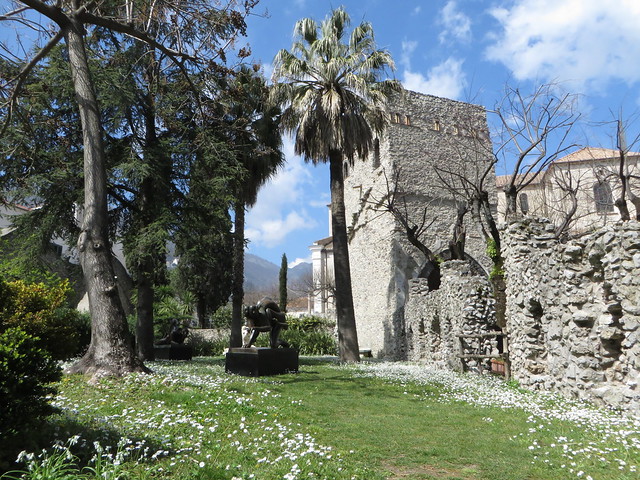 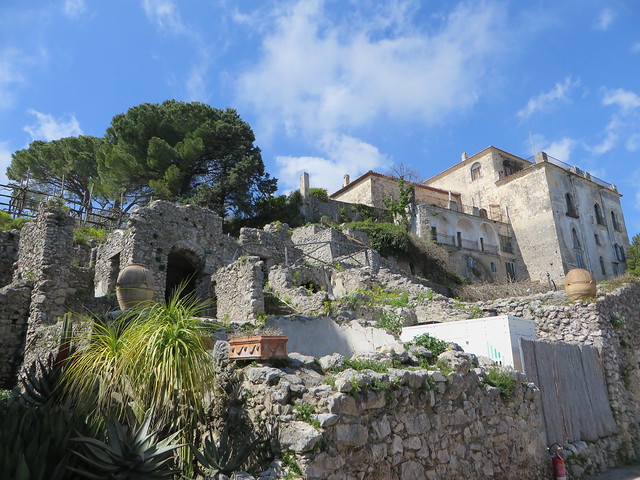 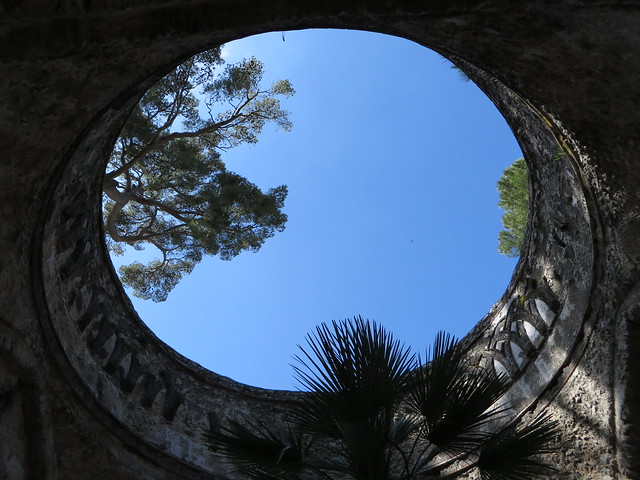 That sounds somewhat jarring, I’m sure – a Frankenstein’s monster of architecture, but it isn’t anything of the sort. The result is eclectic but balanced, congruous not only with itself but the surrounding landscape. It’s shockingly tranquil compared to the bustle and chaos of the rest of the touristy coast.

Rand and I had the place almost entirely to ourselves. 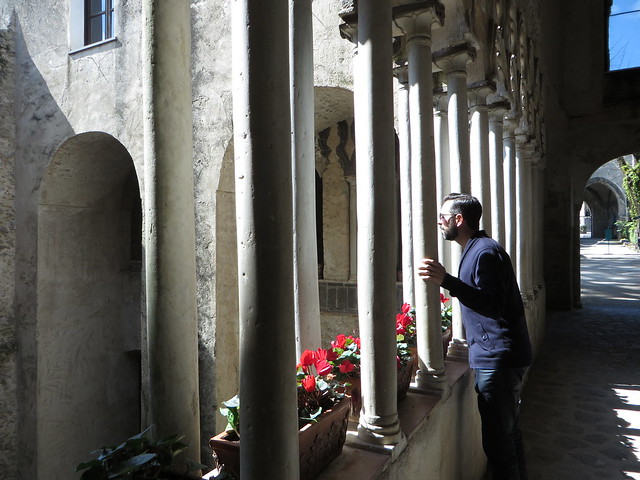 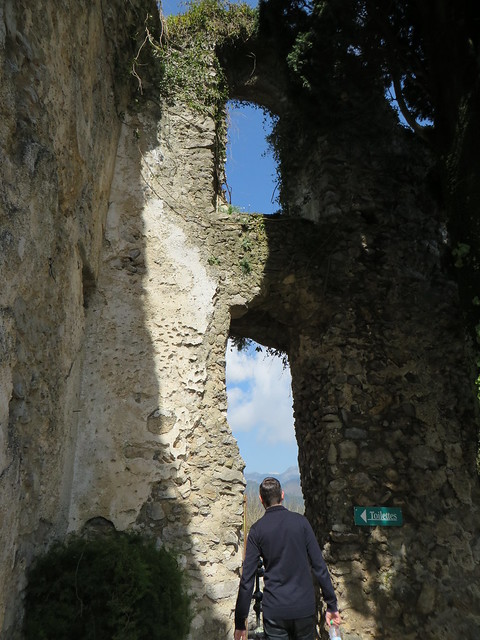 I mean, come on. This was how you got to the bathrooms.

But the real draw was the gardens. 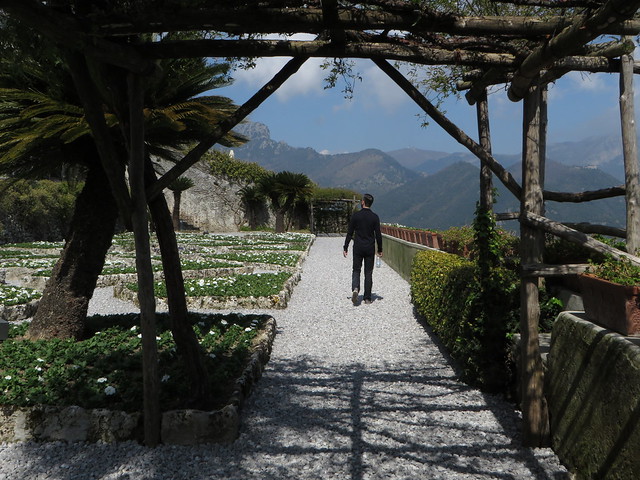 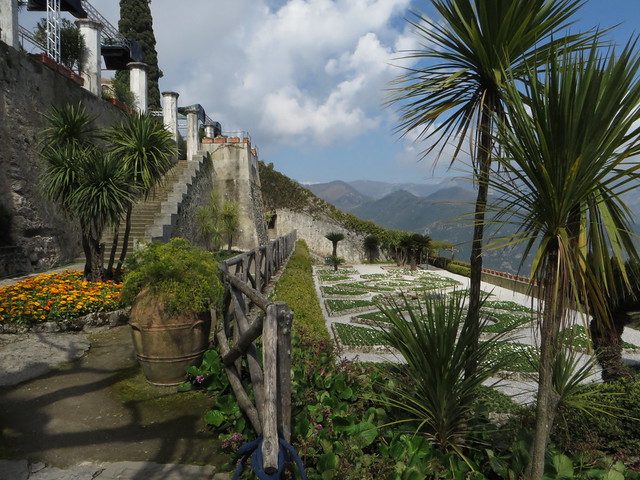 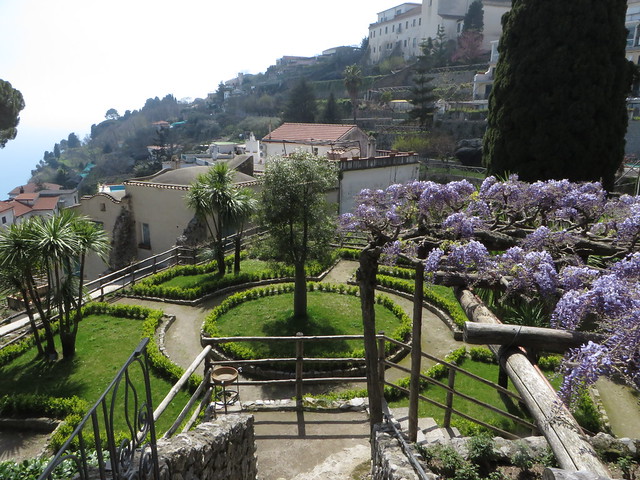 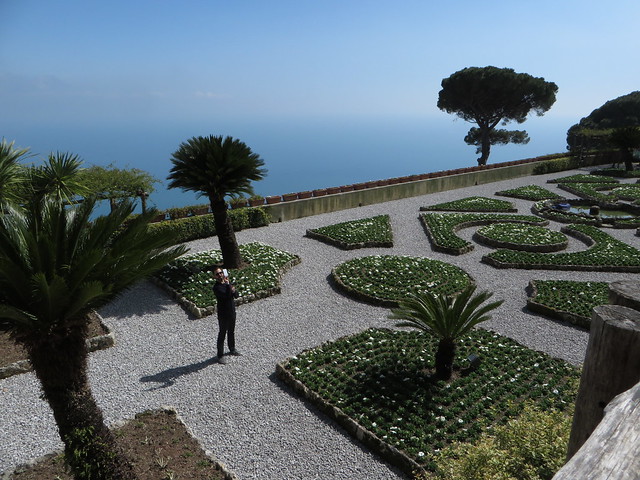 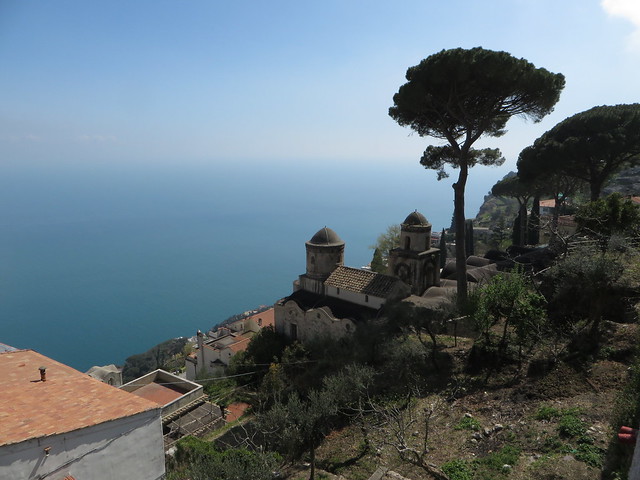 The view wasn’t too shabby, neither. 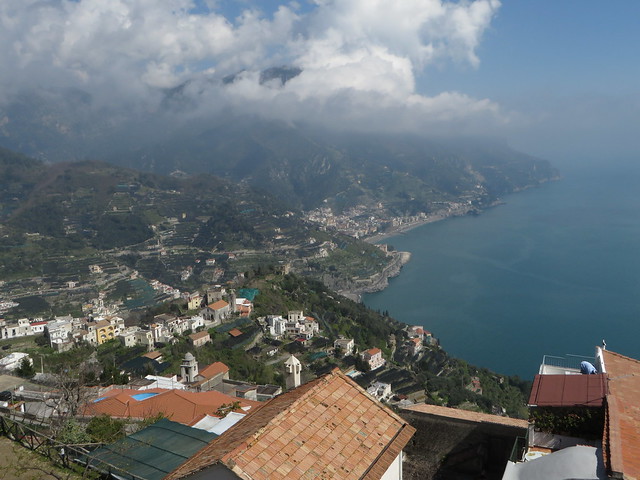 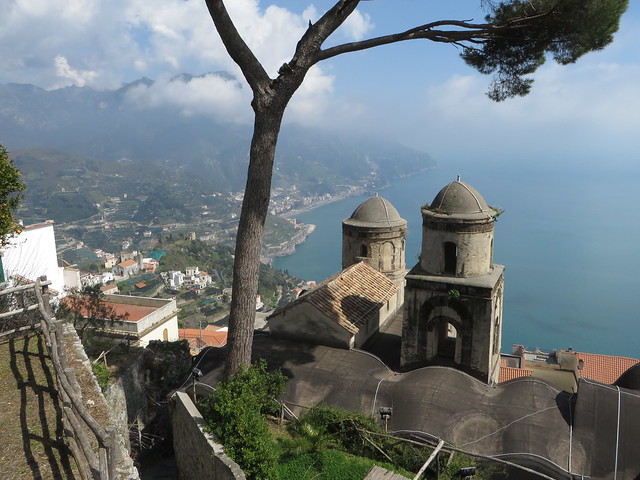 We spied tadpoles swimming in still fountains, lizards skittering over the rocks. The air, like so much of the coast, smelled like citrus and lilac. 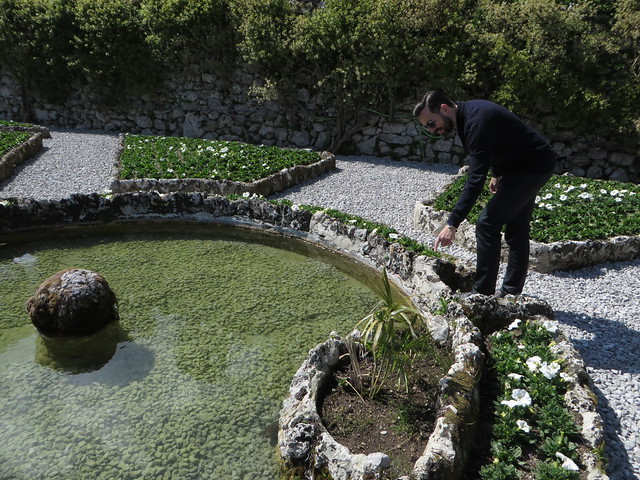 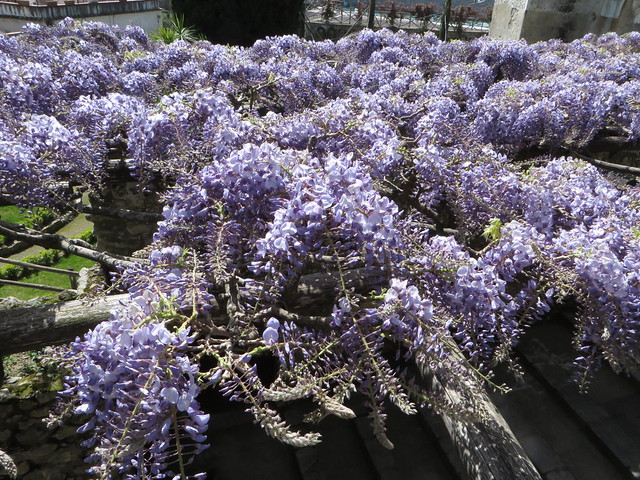 Throughout the gardens there were sculptures, part of an extensive exhibit. I can’t for the life of me find the name of the artist (I’ve searched all my notes, torn through my papers twice), but I will readily admit: I hated her work when I first saw it. I thought it was a blight on the landscape. But as we walked through, I found myself liking it more and more, and by the time we left, I was won over. 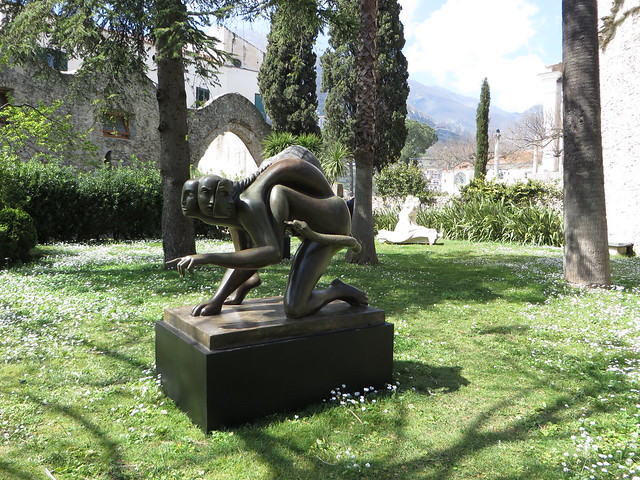 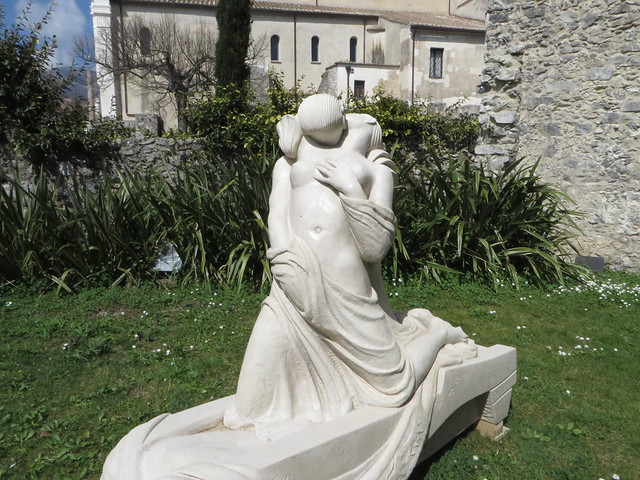 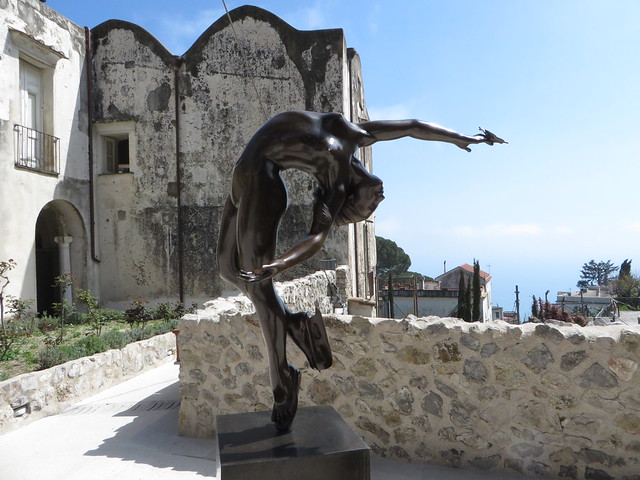 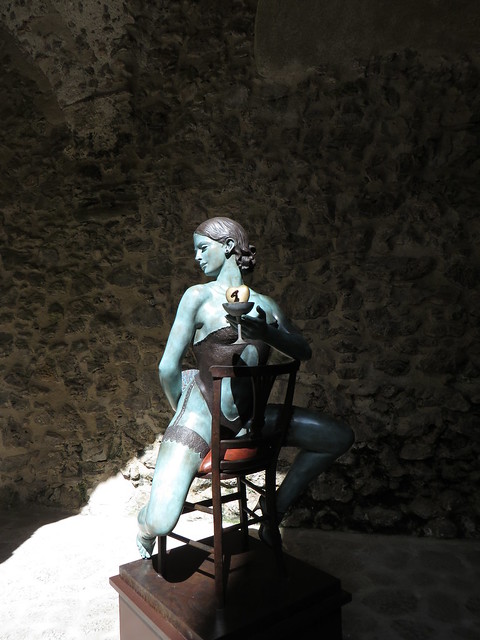 I blame my surroundings for this; I am not prone to changes of heart (see: cab driver, vendetta against). It was like a perfectly orchestrated piece of music: at times cohesive, at times unexpected and a little surprising, but in the end? Harmony. 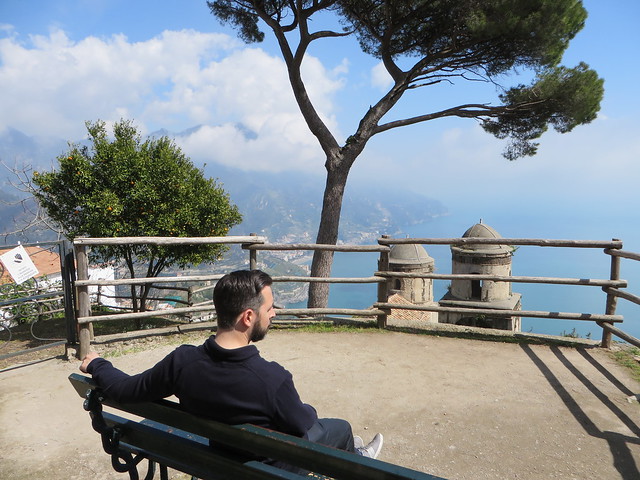 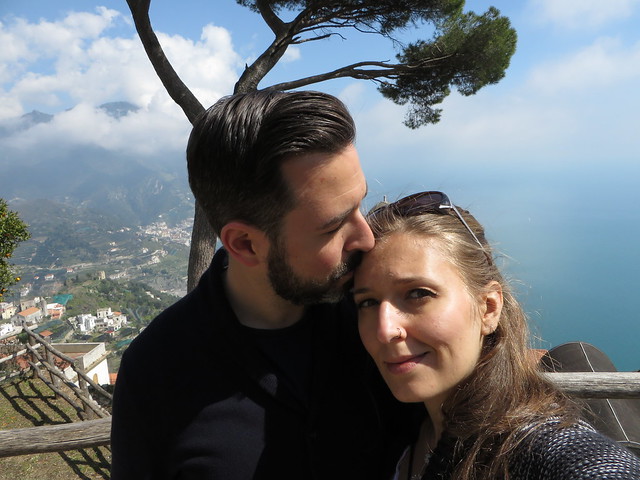 After the chaos of Amalfi, it was exactly what we were looking for.

The Essentials on Villa Rufolo, Ravello: