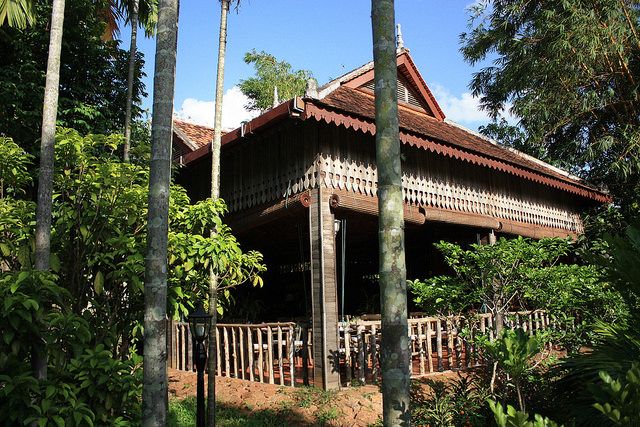 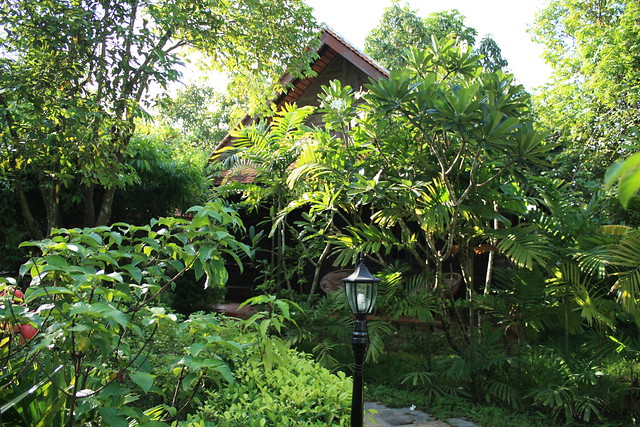 My cottage, hidden by the trees.

I worry way too much about what other people think.

I see the look of skepticism on your brow, and it’s understandable. Most of my actions, eating habits, and every single outfit I’ve ever worn beg to differ. My behaviors are not those of a woman who is overly concerned with the opinions of others. I spend most of my waking hours forgetting that there are other people on the planet. I recently freaked out because I was hanging out with a friend and she was looking at me kind of curiously and I could not for the life of me figure out if it was because I’d just brazenly picked my nose or something.

I hadn’t, but the fact that it was a distinct possibility suggests that I don’t give a rat’s ass about what other people think.

So I suppose I should amend that – I worry way too much that the people around me may not be having fun, and that it somehow may be my fault. And that worry gets crazy out of hand whenever I’m asked for tips on what to see in a particular city, or where to stay, or restaurant recommendations. I start freaking out that I’ll tell them to do something and they won’t enjoy it, and then they’ll hate me. 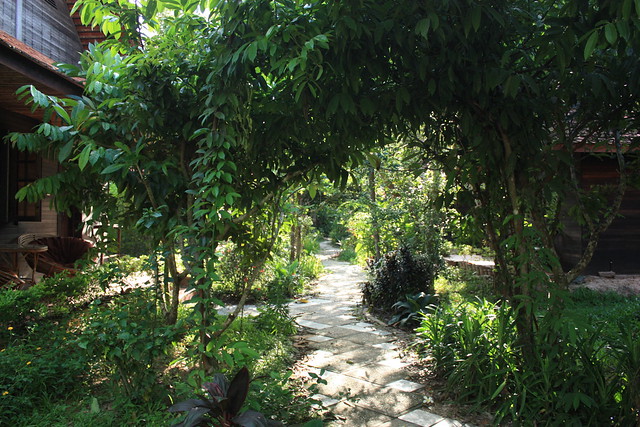 That’s the reason why I wrote my Philadelphia travel guide, and then never completed another one (see also: laziness). Because I am so, so scared of people not having fun.

Rand does not agree with this perspective.

“How, exactly, is it your fault if you recommend something to someone, and they don’t have a good time?”

“Because they asked me for advice and I LED THEM ASTRAY.”

“No. Whether that person has fun or not is not your responsibility. It’s theirs. If they asked you for a recommendation, that’s something they chose to do. You aren’t in control of the experience they have.”

Clearly, I live with a crazy person. But you know the thing about crazy people: you shouldn’t let them near the stove. Oh, and also? They’re sometimes right.

Before Nicci and I left for Southeast Asia, I asked my friend Miranda for her recommendation on where we should stay in Siem Reap. She told me that she really enjoyed Palm Village Resort and Spa – that it was a little bit out of town, but the staff was friendly and the breakfast was enjoyable. I ran the option by Nicci, and she liked the look of the place. So we booked two little Khmer cottages – one for each of us – at the almost-ludicrous rate of $30 a night.

Before I go on, I would like to share with you this photo of Miranda, so you understand exactly whose advice we were taking. 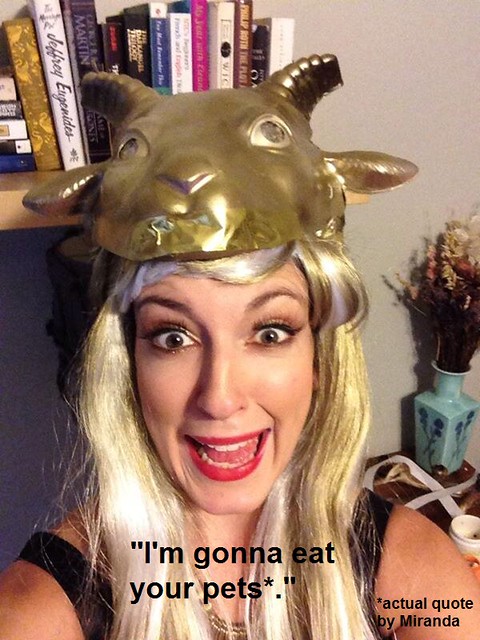 That’s not her real hair.

Oh, also, here’s some vine video she made about The Wizard of Oz and beer (note: there is audio, and it is loud).

Someone told me that one time Miranda was her Secret Santa, and she knew it was her when she received a dogtag necklace printed with the words “DIABETES.” (Apparently, said necklace was a beloved possession of Miranda’s, and it was very hard for her to part with it).

Okay. I feel like I’ve explained Miranda to you. I mean, as much as that’s possible. (How do you hold a moonbeam in your hand? YOU FUCKING CAN’T, PEOPLE. YOU JUST ENJOY THE MAGIC.)

The thing is: while I blame myself for other people not having fun, it would never occur to me to blame someone else if I didn’t. I mean, LOOK AT THE PHOTO ABOVE. I chose to heed that woman’s suggestions about Cambodian hotels.

Nicci and I arrived at the bus depot in Siem Reap (Parenthetically: DO NOT TAKE THE BUS TO SIEM REAP), and a very sketchy looking driver grabbed our bags before we could stop him, and loaded them into the back of his tuk tuk. Which kind of makes it difficult to negotiate on the fare, but it turned out to be $4. Which is fine. I was losing my ability to haggle, because I had no concept of how much things were supposed to cost.

He proceeded to drive us to the very edge of town and beyond, down a broken and rocky rural road, and for the fifteenth time that trip, I gave Nicci the “OH MY GOD WHERE ARE WE GOING?” look, which I’d pretty much mastered by then. I clutched the side of the tuk tuk for dear life as it jerked and bobbled us like a poorly-assembled carnival ride. Two skinny white cows stared at us from the side of the road as we zipped past. 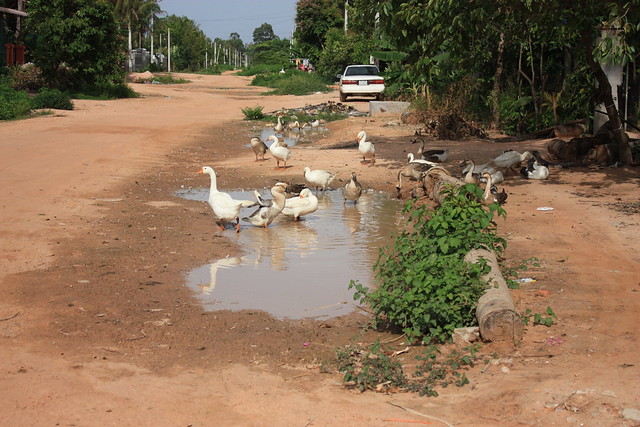 Later, there were ducks.

The driver turned down another road, even more remote than the last, stopping in front of a small thatched building. This was Palm Village.

It would turn out to be my favorite hotel of our trip to Asia.

Each room at Palm Village is its own little cottage, set around a central lanai, and surrounded by a tropical garden that was lush and sticky. You couldn’t take a step without seeing something small and green scurry into the growth. My little hut felt like it was in the middle of the jungle. 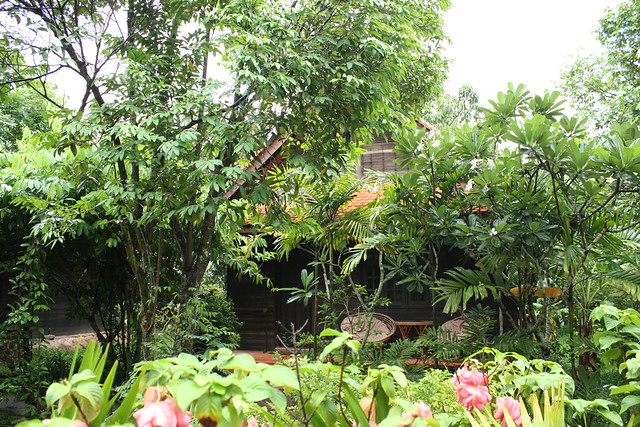 You can barely see my cottage on account of all THE LUSH.

It was cute as hell inside. The air conditioning was downright frosty, and at night, I could here crickets chirping. 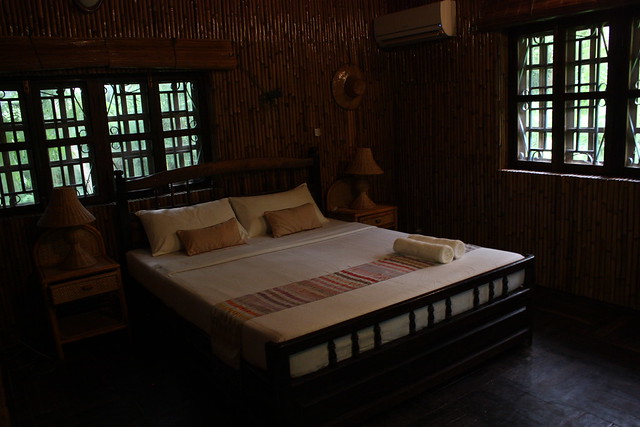 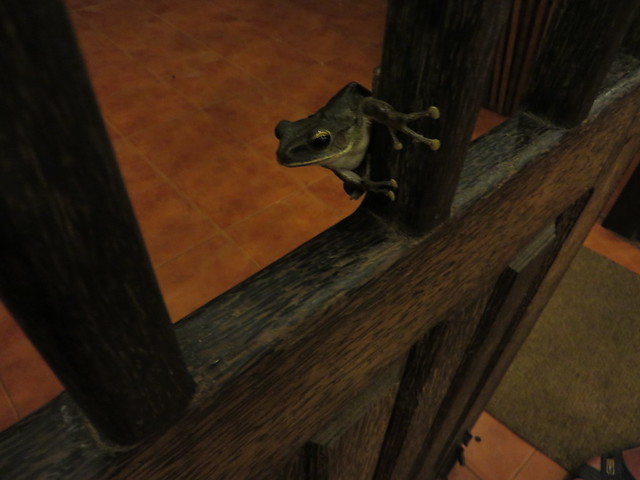 Little frog, just chillin out in the lobby. (Sorry it’s so dark. I was certain that if I used my flash, it would stop its heart.)

The bathroom was my favorite part of my cottage. My camera didn’t really capture it, but the ceiling was draped with billowy white sheets, and I kind of felt like I was showering in a tent. 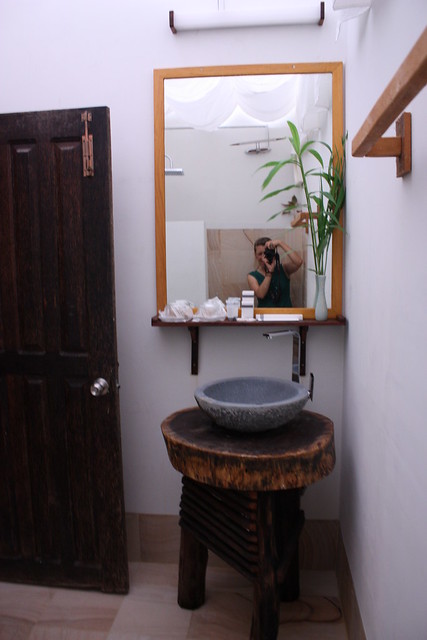 You can see the sheets at the top of the reflection in the mirror. 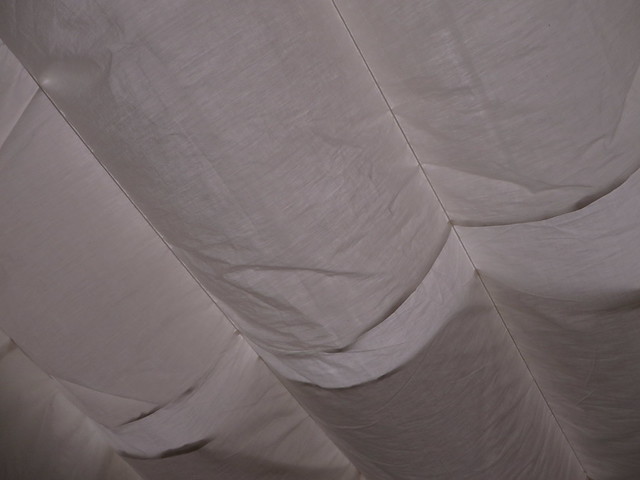 There was WiFi in the lanai where we had breakfast, along with a half dozen long haired little dogs that would come out to greet us every morning. (The whole place was immaculate, and the dogs were no exception. Nicci said that the owner told her the dogs were bathed every other day. A practice that they hated so vehemently, they refused to be caught by anyone who worked at Palm Village. Consequently, Nicci was enlisted by the owner to catch one of the dogs in a towel. THIS PLACE WAS FUCKING MAGICAL, I TELL YOU.) 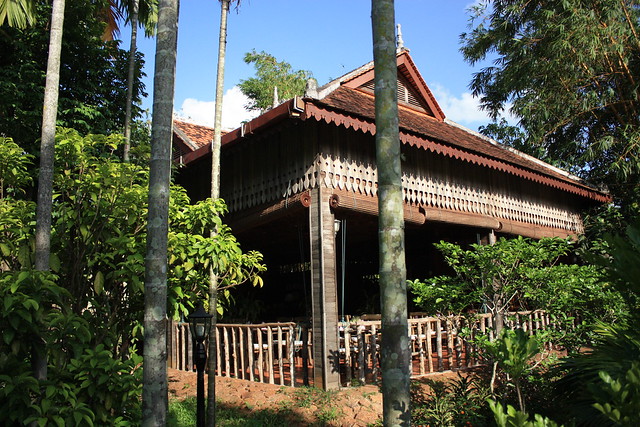 The main lobby lanai, where we had breakfast. 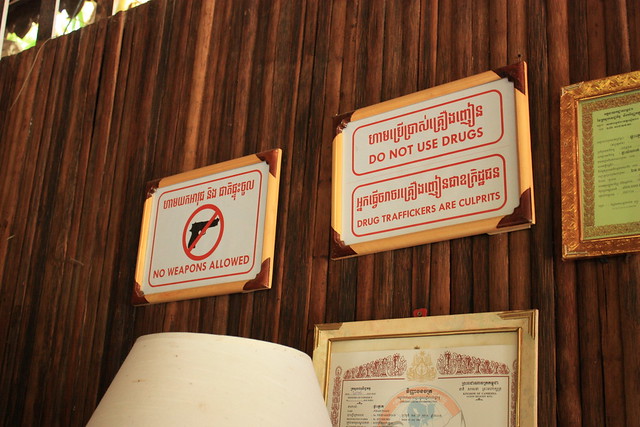 Some good, free advice: DO NOT USE DRUGS. 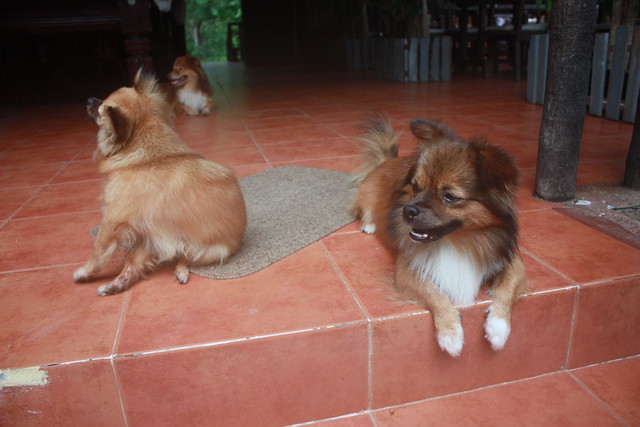 The smallest one (I think on the left here) was a total asshole and bossed the other ones around. It was great. 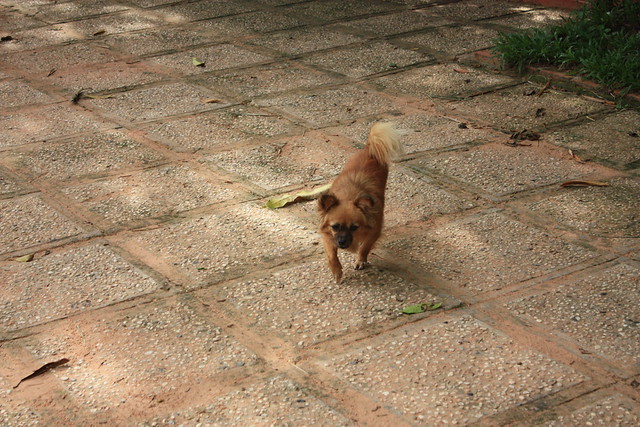 Here she is, coming to kick my ass. God, she was such a little tyrant.

I got the same breakfast every morning, which was basically everything that was available on the menu. I’m not entirely sure if I was supposed to do that or not, but no one told me I couldn’t. I ordered vegetable soup, which was simple and lovely. 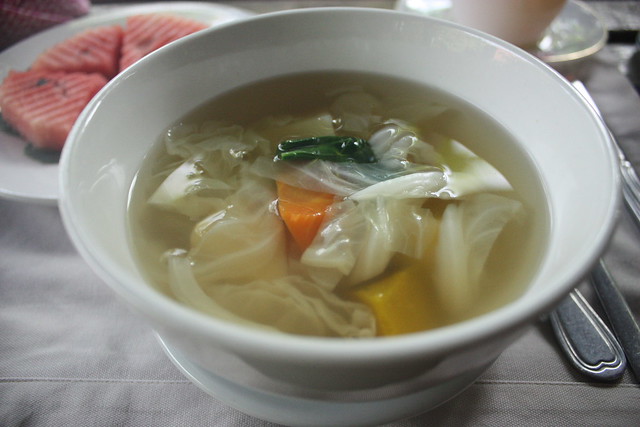 And a poached egg. 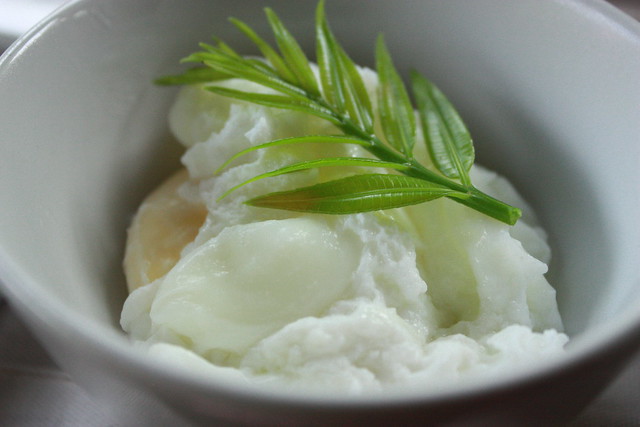 Sometimes, I’d put the egg into my soup, which was a brilliant idea, if I do say so myself. And I do. 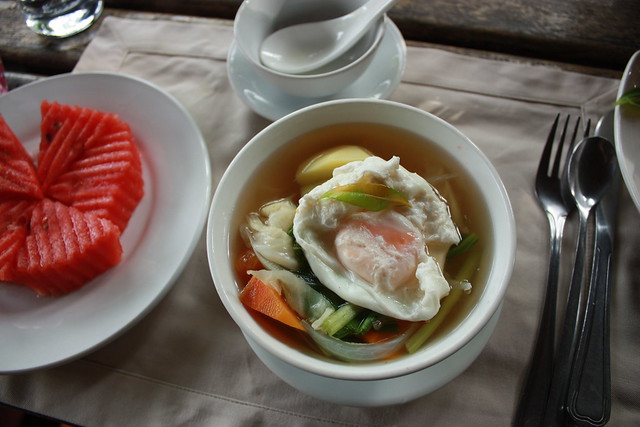 Oh, and papaya pancakes. And a side of watermelon. 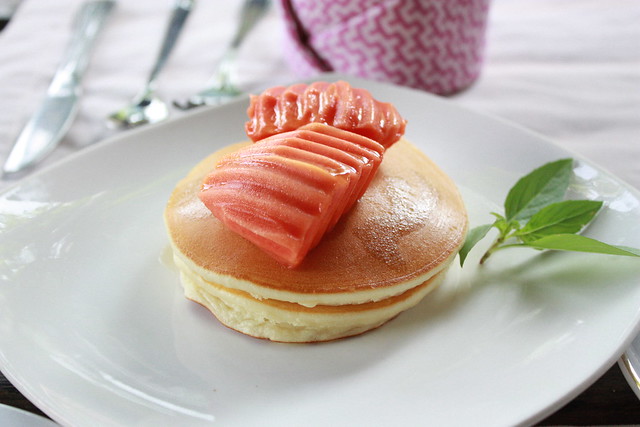 And some traditional Khmer tea. 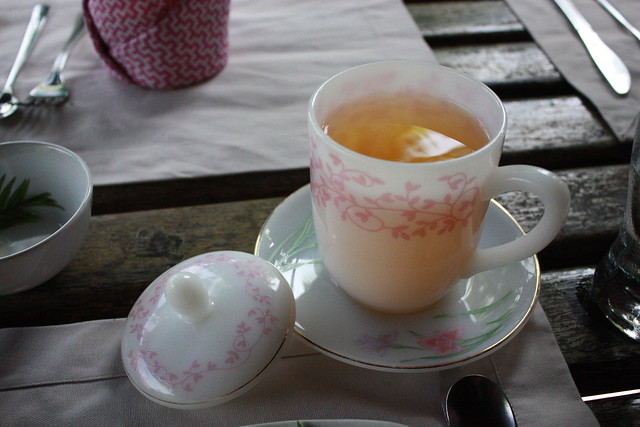 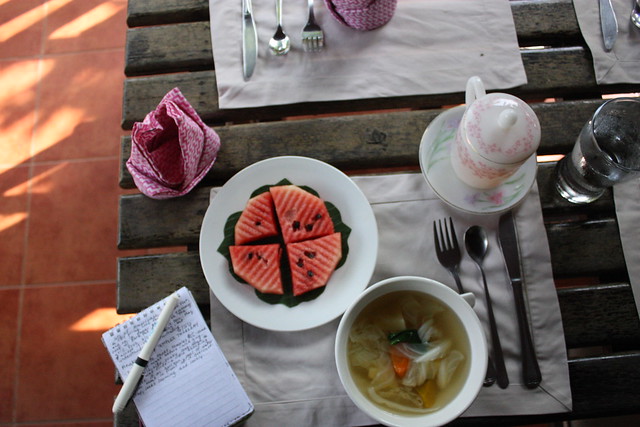 I’d eat my breakfast and take notes on what we’d done the day before.

Every. Damn. Morning. I’d go to sleep excited for it. 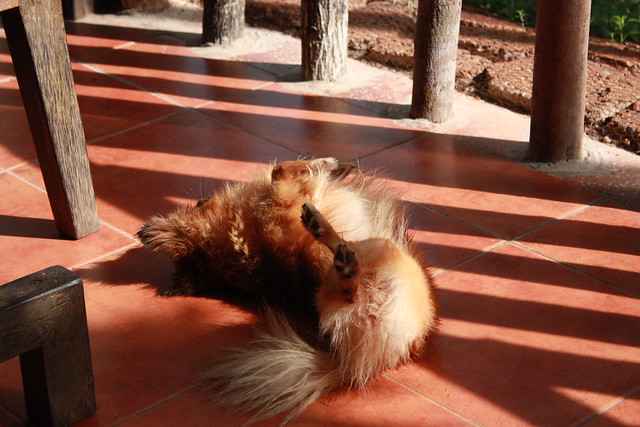 How I felt after eating all of that.

And the staff. The staff was incredible. My favorite was a young woman named Nga, who is now a legend in my own mind. She would negotiate with tuk-tuk drivers for us, answered all of our questions, and basically made sure we were happy. She was always there. I asked her, and she told me she worked 12 hour days, and sometimes got a day off every few weeks. This girl worked her ass off. I made some comment that my husband worked very hard, too, after which I felt like a total shit, because comparing any aspect of my life to hers was FUCKING IDIOTIC. I just wanted to find common ground with her, because she was so amazing. But there wasn’t any. She’s tougher than I will ever be. All I could do was stand and marvel at it. And I did. I still do.

I wish I’d taken a photo of her. But I have none. Here’s one of the pool at Palm Village, instead: 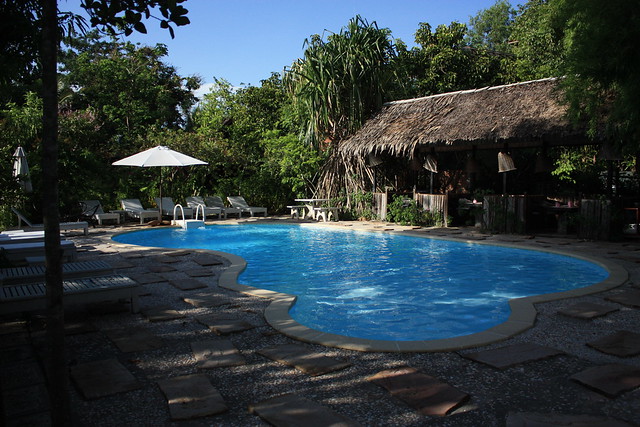 And my laundry basket. I think that this entire load cost me about $2. 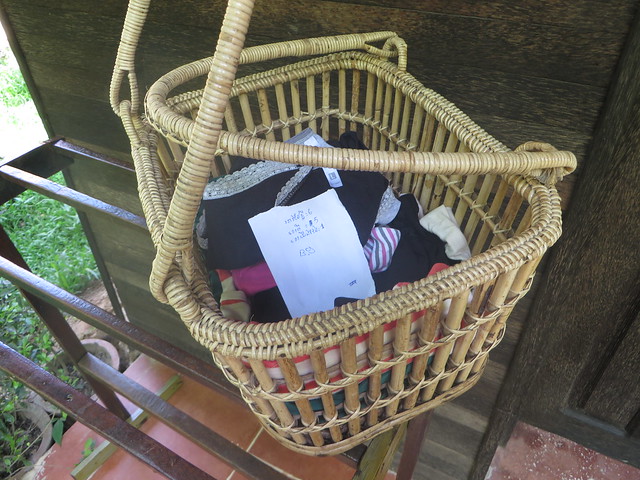 It was hard for me to leave. I was going to miss Palm Village. Miranda’s suggestion had been perfect. Yes, it was a little out of the way, but it was also far removed from the obnoxious, touristy downtown of Siem Reap. It was not fancy. There was no concierge. A large percentage of the staff spoke no English, which led to lots of pantomiming and confusion. But it was cozy and welcoming and it felt like it was all ours.

A few weeks after we got back to the states, a friend of mine told me she was leaving for Vietnam and Cambodia. She asked me if I had any suggestions for Siem Reap.

Palm Village, I told her without a hint of hesitation.

My friend hated it. It was too far from town, the food was awful, the staff mean. When I saw her message, I couldn’t help but smile. I was sorry she had a bad experience, of course. But I wasn’t in control of that.

Besides, she’s known me for 25 years – and she still decided to listen to me. And I was sure that I couldn’t have given her better advice.