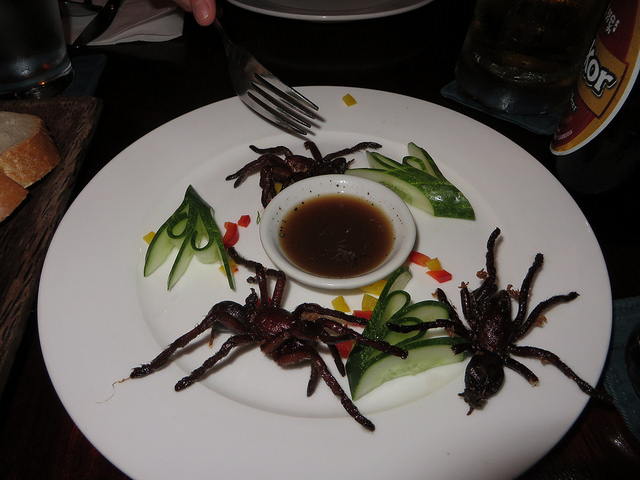 Spoiler: We eat spiders. If you do not want to see photos of this, then you may want to read another post. (May I suggest this one? It’s about the best cupcakes I’ve ever had. It’s totally safe and spider-free.) 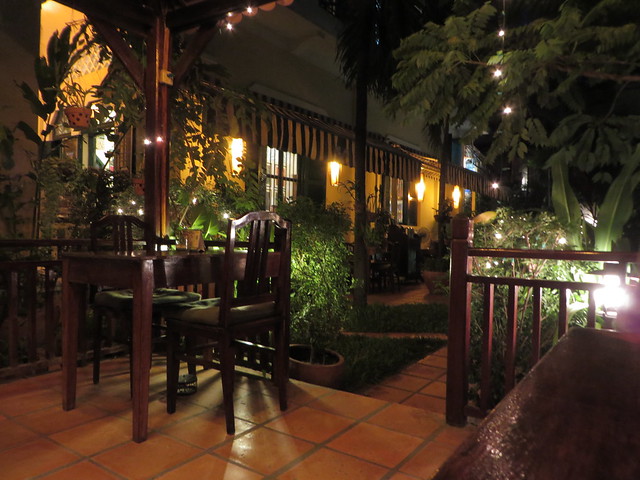 The outdoor patio at Romdeng.

On our last night in Phnom Penh, we had dinner at Romdeng. Nicci had read wonderful things about it. It was a training restaurant, part of Friends International, an organization that provides assistance to marginalized children and their families throughout Asia. The bulk of the staff at Romdeng are former street kids (along with a few of their instructors).

The sun had set, and the steaming heat had tempered slightly, so we sat outside, surrounded by plants and Christmas lights. Someone came by and lit an incense burner at our feet – supposedly it would keep the mosquitoes at bay. The menu featured many traditional rustic dishes – some were familiar (fish amok) and some were not (deep fried tarantulas).

We sipped our drinks (I was quickly becoming addicted to fresh lime soda), and looked over the offerings, in no real hurry to order, or to do much of anything, really. We’d spent the entire day at Phnom Tamao Wildlife Rescue Center. We were tired. Perhaps that partially explains what happened next. 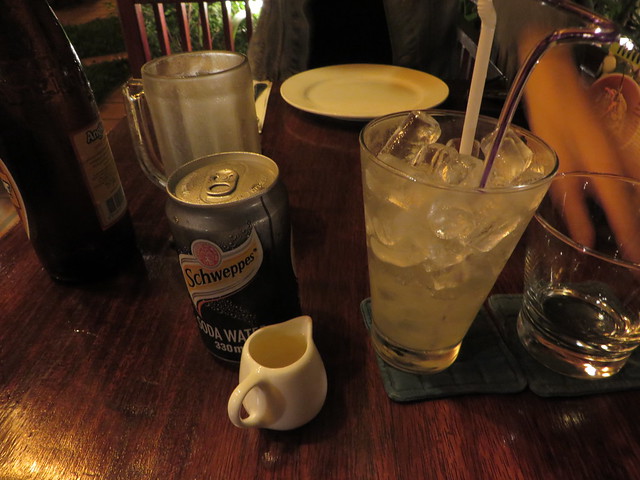 Nicci looked me square in the eye and said, “I think we should get the fried tarantulas.”

Mind you, Nicci is an arachnophobe. She’d told me as much already. So I was a little bit surprised by her suggestion, but I will absolutely not stand in the way of someone eating their fears. Besides, I sort of wanted to see what they were like.

By the time they arrived at the table, and the reality of the situation set in, my resolve had begun to whither. These were tarantulas. And, dear god, they looked JUST LIKE TARANTULAS. They were not rendered unidentifiable in some sort of thick batter. No. They were large and black and multi-legged and not all that dead looking.

It seemed like they could have just scurried off the plate. Upon closer inspection, I could see tiny hairs still covering them. 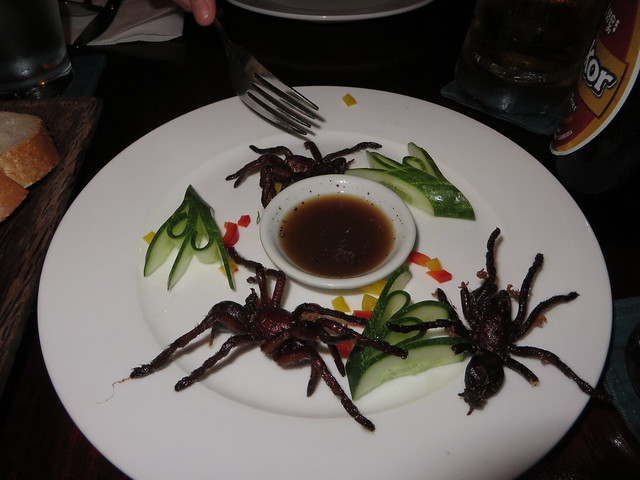 But I wanted to put on brave face, so I tentatively tore a leg off, and dipped it into the lime-pepper sauce that accompanied it. I looked up to gauge Nicci’s reaction, and found that she was enthusiastically cutting a tarantula in two. She dipped it in the sauce and popped it in her mouth while I was still nibbling on a meager leg. 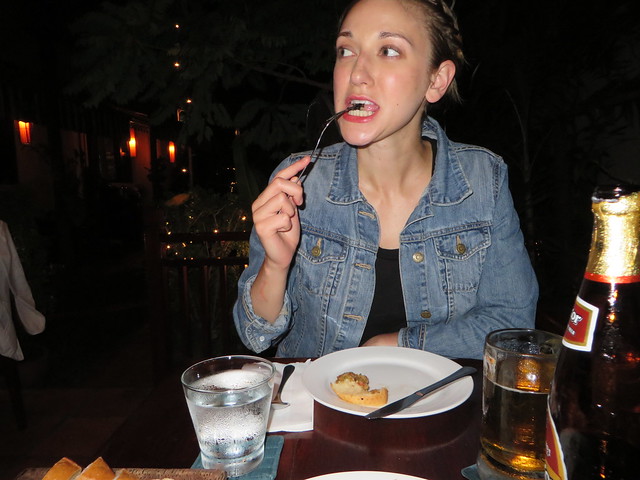 “Holy crap. You’re just going for it,” I said, more to myself than to her. And I realized that if Nicci, who was afraid of spiders, could do it, I could, too.

I grabbed my knife, sawed into the segmented body (I still couldn’t bring myself to pick the whole thing up and put it in my mouth), dipped it in the sauce, and chewed.

And you know what? It was actually pretty darn good. Very similar to fried soft shell crab, though perhaps slightly more offal tasting.

We ate one and a half tarantulas each.

In comparison to that, I suppose our main dishes seem rather uninteresting, but they were lovely nonetheless, so I feel compelled to mention them. I got the fresh river fish with green tamarind and green mango salsa. The tamarind was sour – almost like citrus- and paired nicely with the mild fish (which was similar to trout, I think). 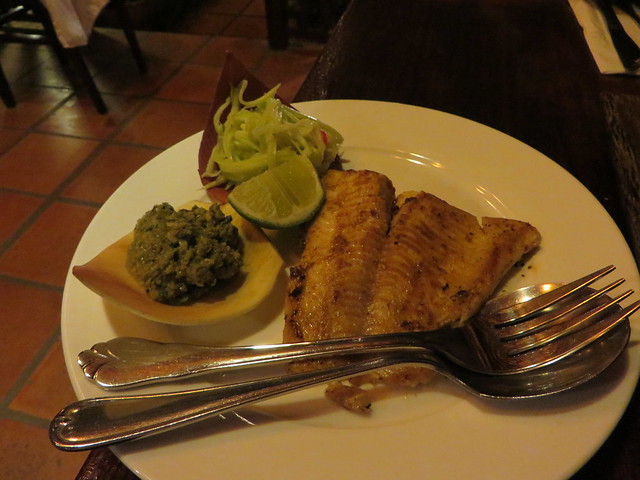 Nicci got kampot crab, which she said was amazing, but looked far too involved (I was in no mood to work for my food at that point of the day). 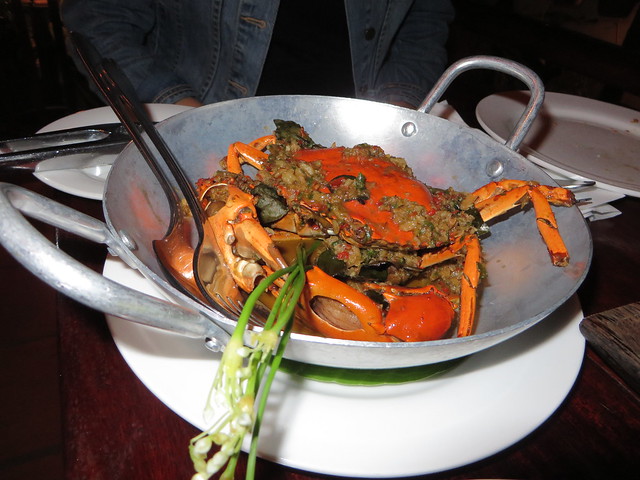 And, of course, we got two desserts. Because we have our priorities straight. A fried sort of coconutty rice ball, with minced sweet peppers inside, and rolled in sesame seeds. It tasted like a strange, quasi-savory cousin to the macaroon. 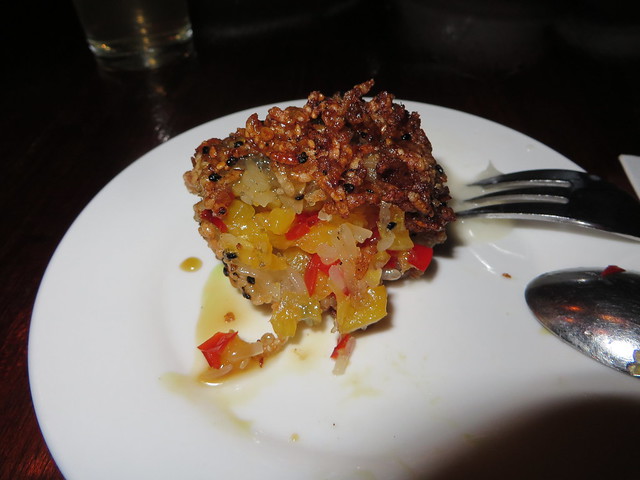 And a warm coconut milk pudding, filled with gelatinous rings of pulp. I suspect that description doesn’t quite sell you on it, but it was warm and comforting. The dessert equivalent of a hug. 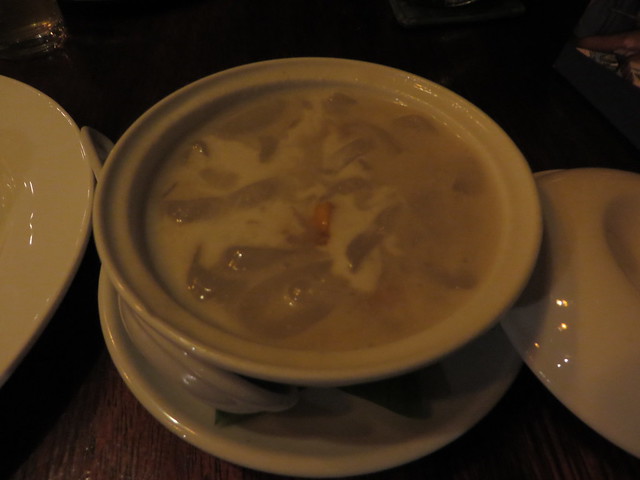 This photo does it no favors, either.

The bill was slightly higher than other restaurants in Phnom Penh, but it was still only about $7 a dish. Besides, it was well worth it, and supported a wonderful organization. It quickly became one of my favorite meals of the trip, and towards the end of our journey, Nicci and I were discussing it once again.

I told her how proud I was that she tried the spiders. She smiled.

“The one thing that went through my head afterwards was that we ate spiders. And later, I thought, ‘We will poop out spiders. That will happen.'”

Honestly, I hadn’t thought of it that way. But Nicci had, and I’ve got to say: I think that makes her all the braver. 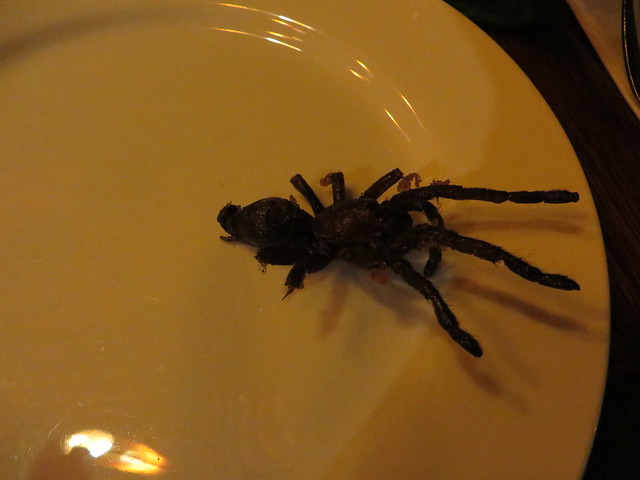 Doesn’t it look like he might scurry away? Except that I tore his legs off and ate them.