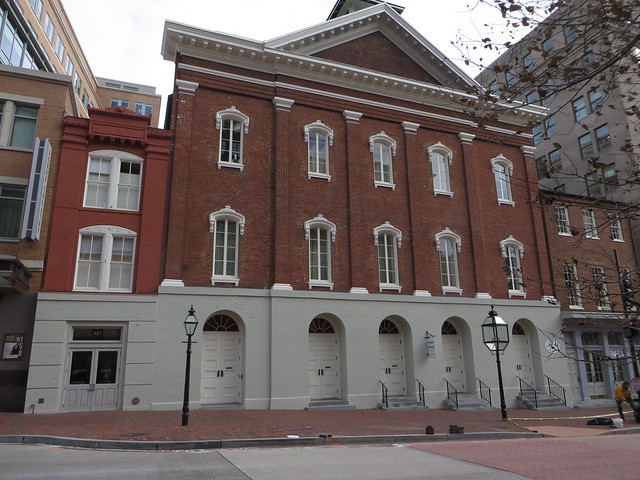 Ford’s Theater, where Lincoln was shot.

I should be perfectly honest here: I didn’t intend to go to visit the home where Lincoln died. I had heard that there was a good hole-in-the-wall breakfast place nearby, and that is where I directed my cab driver to take me.

So I stumbled upon the site of our 16th president’s last moments while looking for an establishment called “Lincoln’s Waffle Shop.” This is somewhat embarrassing, as most true things are. 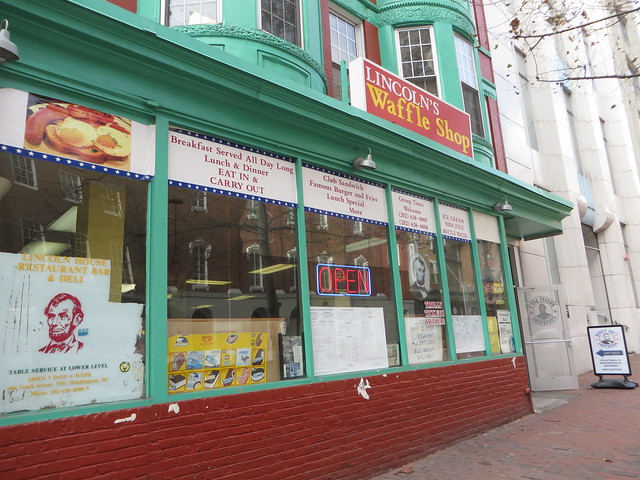 If you are wondering how much time must pass before we can make tchotchkes of a fallen leader, before national tragedy can become kitsch, the answer is somewhere between 51 and 149 years. During my trip to D.C., I saw t-shirts with Lincoln’s image on the front, a pair of dark sunglasses added. Shirts where his iconic beard and hat were covered in glitter. Bobble heads and chocolate bars bearing his likeness. I have never been to Dallas, but I have my doubts that JFK has been immortalized in quite the same way.

I was en route to the waffle house when I saw this sign on a small brick house just a few doors down: 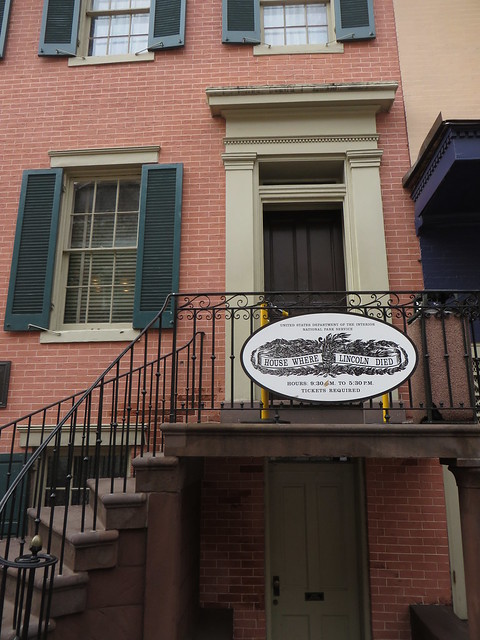 I paused, looked around, and realized I was across the street from Ford’s Theater. 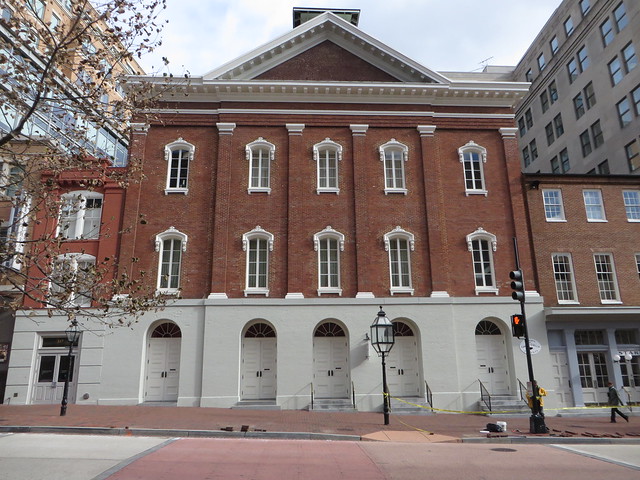 A woman was exiting the small house, and I asked her where I could get the tickets (“required for entry”) mentioned on the sign. She explained that they are usually available at the theater itself, but since there was a matinee that day (Ford’s Theater still operates as a theater! For some reason I found this detail remarkable) I could get them inside the house.

I forgot about breakfast (this was during my sugar fast, after all, and the allure of eggs does not compare to the allure of waffles), and walked up the stairs and inside. I’d soon learn that it was called the Petersen House – named after the tailor who had commissioned the building of the house in 1849, and who still resided there with his family on the night of April 14, 1865.

I was the only one there, save for a helpful guide. She explained to me that Lincoln had been carried out to the street after he was shot, and one of the boarders of the house told the attendants to bring the President inside. In the front parlor Mary Todd Lincoln waited to hear news of her husband’s condition. 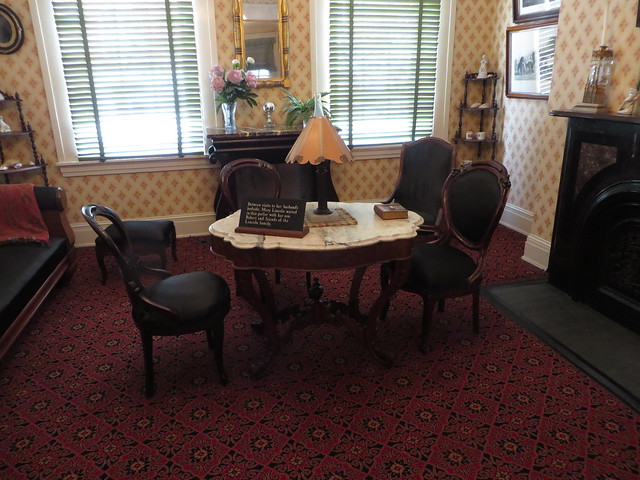 In this small bedroom at the back of the house, he died. It was here that Secretary of War Edwin Stanton famously uttered, “Now he belongs to the ages.”

(Note: earlier, Stanton had banned a bereaved Mary Todd Lincoln out of the back room by shouting, “Take that woman out and do not let her in again!” Which seems pretty insensitive and dickish, and was why she was sitting in the front parlor instead of at her husband’s bedside.) 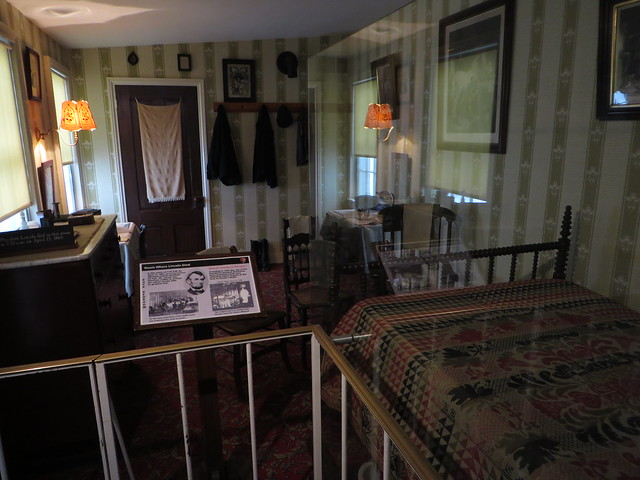 I stood in the back room for far too long, feeling the weight of it all. I often take my travels for granted – wander through a location without paying enough attention to the importance of it, skipping historical sites in favor of a snack and shopping. But sometimes the significance of a place is not lost even on me.

On that chilly December morning, I stood at the site of an event that I’d known about since childhood, one that I’d studied in history books. This was the place where our 16th president had died. 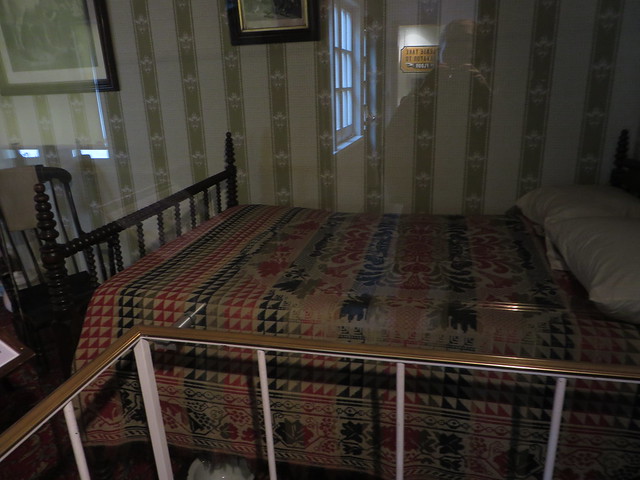 The furniture is not original, but my understanding is that the reproductions and their placement are fairly accurate.

The realization that I had nearly walked by it, and into a waffle shop named after him, hit me with no small dose of shame. What do people feel when they eat a chocolate bar shaped liked Lincoln?

I took the elevator upstairs, to the adjoining Center for Education and Leadership, which traced the story of the President’s death and legacy. Again, it was blissfully empty. Again, the air felt sad and still – the far wall was made entirely of windows, looking on to the famed theater.

I wandered through, reading about John Wilkes Booth’s final days, the shootout in a blazing barn where he had hidden himself. How he was shot in the neck, the bullet lodging itself in his vertebrae and paralyzing him.

In his final moments, he asked that his hands be held up to his face, where he looked at them and muttered, “Useless, useless.”

The center had numerous displays, including a glass case featuring decorations that had adorned the platform on which Lincoln’s casket had rested (such a platform is known as a catafalque). 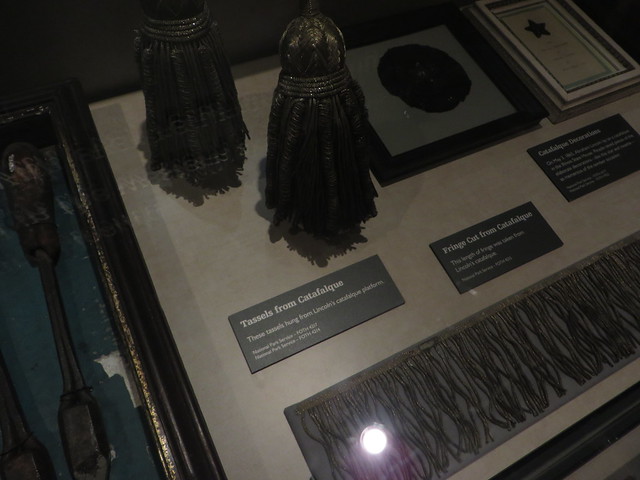 That same catafalque – though hastily built – has been used for all those who have lain in state in the Capitol Rotunda, including all subsequent U.S. Presidents and a handful of politicians and military leaders (the list is dominated by men – the only woman to have had the honor is Rosa Parks. Though as a private citizen, she lay in honor, not in state).

The center also features a massive tower of books about Lincoln – nearly three stories high, comprised of 6,800 books. A spiral staircase wound around it, and I climbed down the stairs slowly, marveling at it. 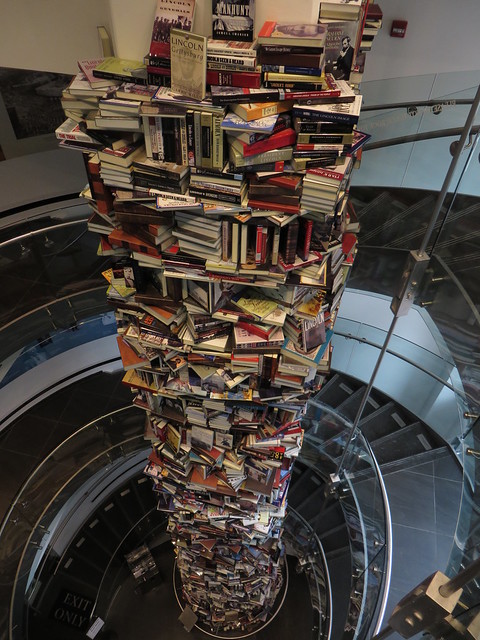 I exited again on to the street, standing there a moment in front of the house where Lincoln died, and across the street from the theater where he was shot. I gathered my coat around me and walked down the empty street.

I passed the waffle shop without a second thought.

The Essentials on Ford’s Theater and The Petersen House: