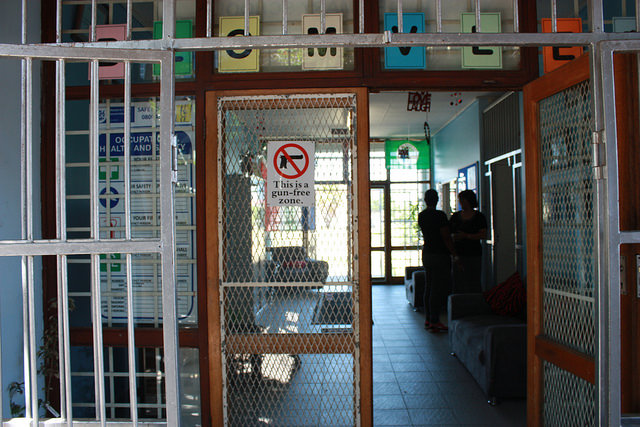 Posted in: Life in the Rest of The World 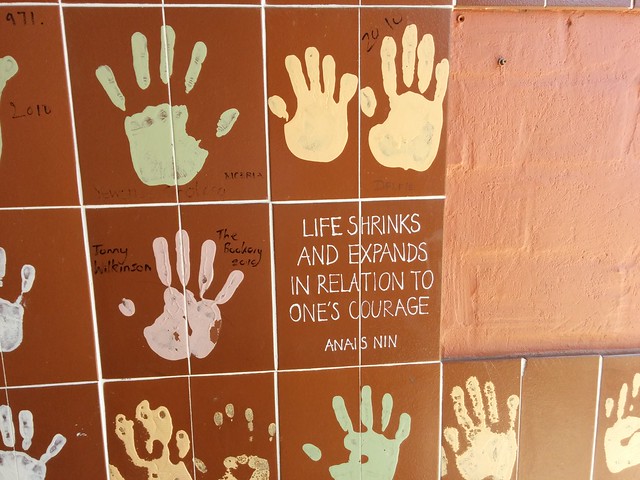 Note: I wanted to share photos of the kids from the school we visited in South Africa but I realize that I don’t have permission from their parents or guardians – only their teachers. Consequently, I’ve tried to select images where the kids are either in the distance, or not visible head-on, so that it wouldn’t be easy to identify them. In some instances, I have tried to reduce the focus on them (literally) while still trying to maintain the integrity of the image. My intent was not to reduce them to a background, to dehumanize them, or turn them into props for the white tourists visiting their school. Rather, I wished to maintain their privacy. I hope that my efforts to keep them anonymous has not insulted their autonomy in any way.

Needless to say, these are real children. They have real feelings and problems and losses and triumphs. They are not anecdotes. They do not exist so that I can make a donation to their school and feel better about myself. But they do exist. And they should not be ignored or overlooked.

I am also acutely aware that it is kind of messed up to have the only non-blurry image be of a small white child in South Africa. But that’s the compromise I went with, as I have Jack’s parent’s permission to put him on the blog.

Please feel free to email me or leave a comment if you want to further discuss the issue of how to portray children on blogs.

The fence around Blomvlei was tall, lined on the top with barbed wire. The buildings inside had bars on all the windows. The administrative offices were surrounded by multiple barred doors. 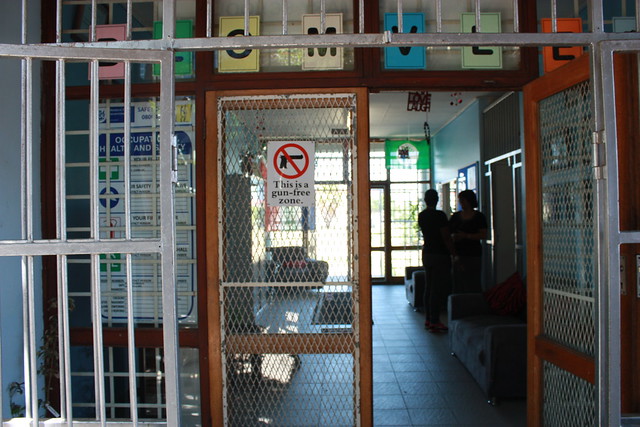 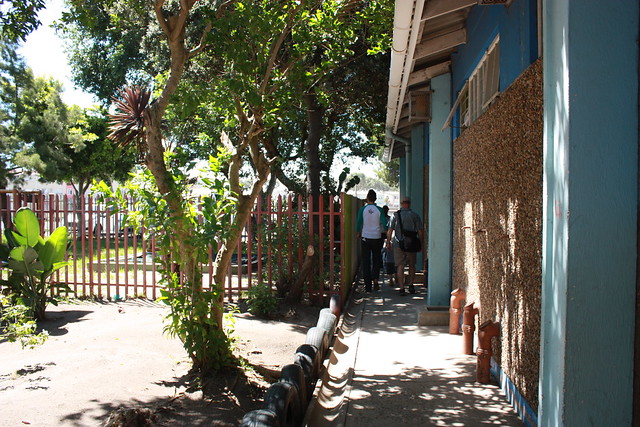 We’d seen security like this throughout Cape Town – large fences, barbed wire, alarms, even guards. But what I could not reconcile was that Blomvlei isn’t a bank, or a store, or a private residence. It’s an elementary school. It is located in the township of Hanover Park, a 15-minute drive from downtown Cape Town. 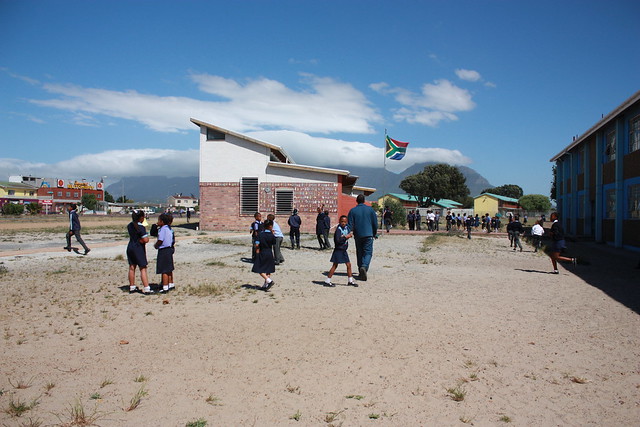 I’ve talked about the history of the townships before on the blog – they arose during apartheid, when people of color and of mixed raced backgrounds were forced from their homes to the outskirts of the city. They were segregated arbitrarily into different townships.

The townships themselves were built-up hastily, with virtually no infrastructure – the government provided no funding for roads or sidewalks, electrical lines or plumbing. The laws of apartheid made sure that this wouldn’t change – that residents of the townships would be forced to live in abject poverty and unsafe conditions. If you weren’t white, you were prohibited from working in a skilled trade and limited in the amount of education you could receive. The laws on the books actually prevented you from earning a decent, living wage.

So you were stuck. (And you weren’t allowed protest, peacefully assemble, move to a new place, or even vote in hopes of changing things.)

Under an unjust and racist system the townships became dangerous places to live, and remain so (this is the lasting legacy of apartheid – it’s long and ugly). Crime is a huge problem, the murder rates are high, and gangs are prevalent. In 2013, schools were actually closed out of teacher’s concerns for their own safety.

Many gangs recruit younger and younger kids – they’re easier to indoctrinate, and considered desirable members because their prison sentences are often much lighter than those for adults. With unemployment and poverty rampant, and schools being shut down, the gangs have easy pickings.

I don’t need to elaborate on how messed up all of this is. How important schools like Blomvlei are for their communities, and the future of South Africa.

And how important people like Dawn are. She was the headmistress of the school, and despite being absolutely swamped, she welcomed us in and showed us around. 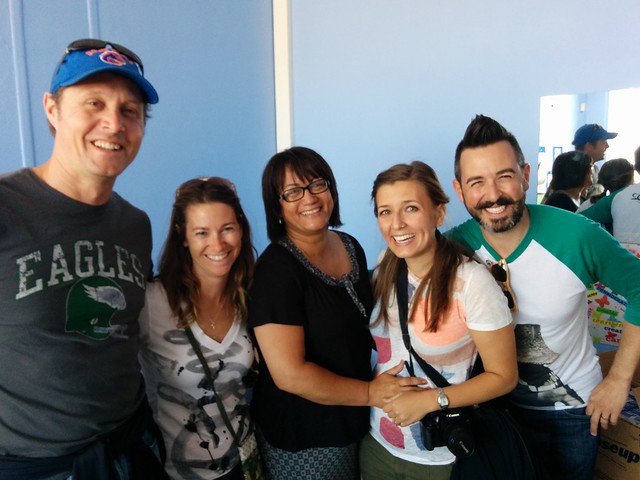 She was a warrior.

She explained that the school had been broken into several times – mostly recently 3 weeks prior. The thieves had come in through the ceiling and stolen the monitors and computers in Dawn’s office. They fortunately weren’t able to get much further, and Dawn noted that they thankfully didn’t vandalize or destroy her office excessively (this has happened in the past).

She joked about how she tough-talked her insurance adjuster (noting that the overhead lights in her office were dangling precariously above her), so she was able to get a claim check quickly to fix up the mess.

She was currently preparing a celebration for the grandparents of her students (many of them had absent parents, and the grandparents were the primary caretakers). She explained that she had anticipated it would be a smaller affair, but it had soon grown to be much larger than that. She was working on collecting donations, she said, waving to a large pile of soda and snacks in one corner of her office.

She talked about some of the issues she was presently facing, kind of shrugging everything off the way only extremely competent people can. But Dawn and her staff were dealing with more than just standard elementary school problems. Poverty, break-ins, robberies, hungry kids, incarcerated parents, gang violence (she noted that the week prior, a teacher at a nearby school had been shot in the face).

Dawn was dealing with every conceivable problem I could think of. And she was doing it calmly, with humor. And all while wearing heels.

Rand’s colleague Andre arranged the tour of Blomvlei for us (he’s known Dawn for a while), and we were lucky enough to visit when school was in session. The playground, we’d soon notice, was bare.

When I asked about this, the answer was sadly not as shocking as it should have been: there had been playground equipment, but it had been stolen and sold for scrap metal. 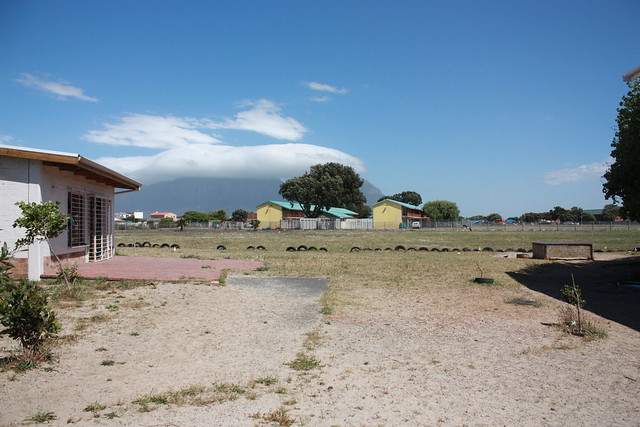 And all of the classroom windows had bars on them. 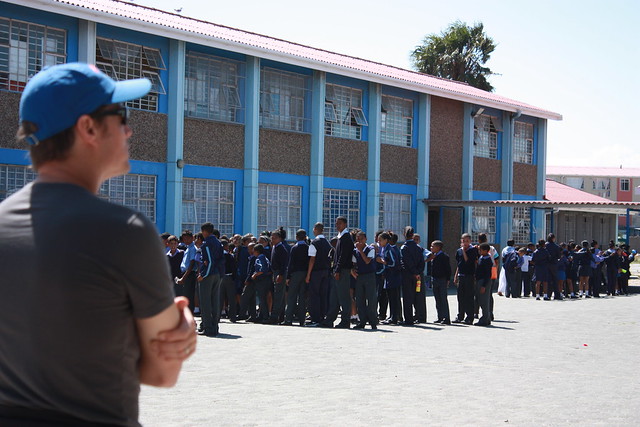 We walked around the library – it was presently empty as the kids were all outside on break. But soon they began to crowd around the windows and peek in, shyly.

One girl finally spoke up. Apparently, they all wanted to say hi to Jack. Because when you are 8 or 9, what is more glorious or more fun than a toddler? So they came in, and played with him, and told us their names and how old they were.

Jack was hit simultaneously with a love of this attention and a burst of uncharacteristic timidity. 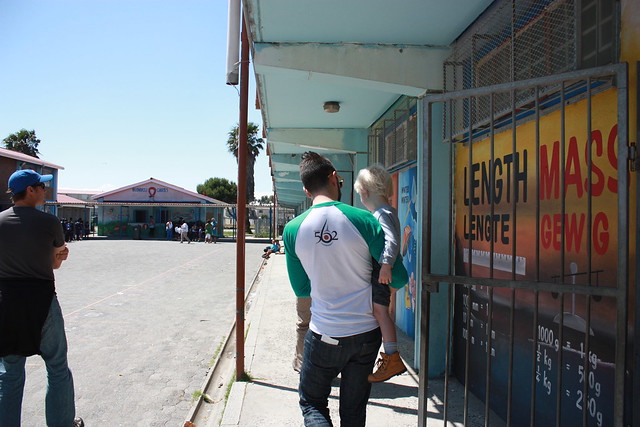 Rand carrying Jack to a classroom.

We later were welcomed into a classroom. I think they were first or second graders – I can’t remember. Rand and Jack stole the show, which I suppose isn’t that surprising. They were clearly the most entertaining of the bunch. The kids thought Rand’s name was particularly funny (the rand is the currency in South Africa). 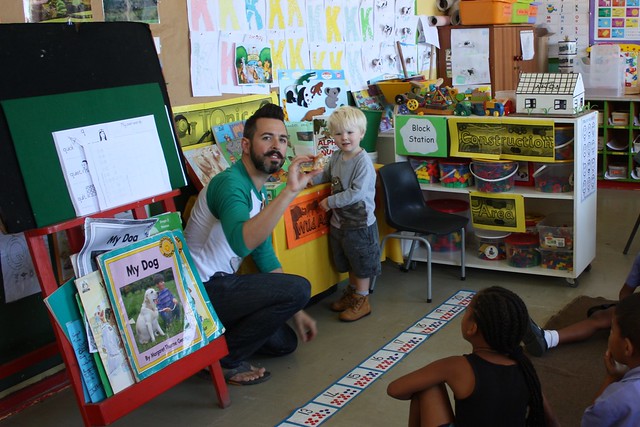 And when Jack held up a small plastic springbok (a small, deer like creature that is the country’s official animal), and shouted, “A CHEETAH!” they erupted into giggles.

At one point, Rand was sitting down on the ground in front of me, and I was absentmindedly playing with his hair. Every time I pressed it down, it popped back up. The kids cracked up. I asked them if they wanted to try it. And they all rushed up. And this happened: 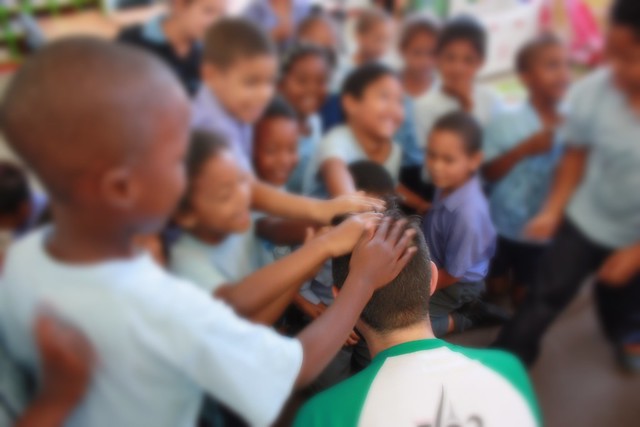 I wish I could tell you more. I wish I could tie up the experience neatly in a bow. How incredible Dawn is. How lovely the kids are. The ridiculous amount of things they all have to deal with. Not simply the difficulty of childhood, or of running a school, but doing so in one of the most dangerous places in the world. How acutely aware of my own privilege I was, at least for a little while.

But the thing that hit me most about all of it was this: that despite the barbed wires and the fences, this was a school. It was filled with students and teachers and love and learning.

And it remains one of the most important places I’ve ever been to.