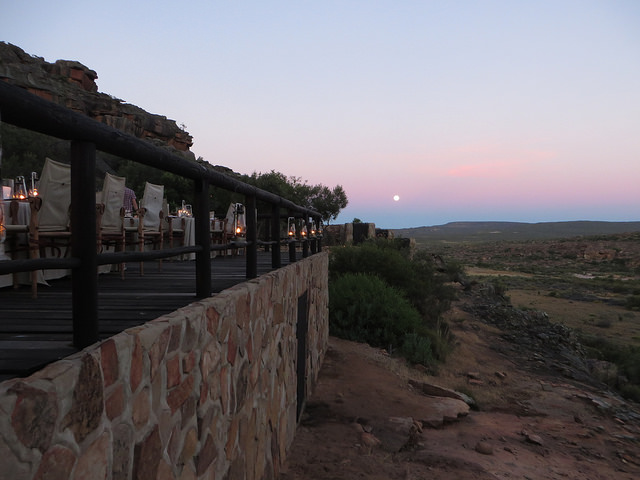 Posted in: Awesome, Rants and Raves

Later, when we talked about that dinner, we spoke with reverence of many things. The sky. The lanterns. The food. 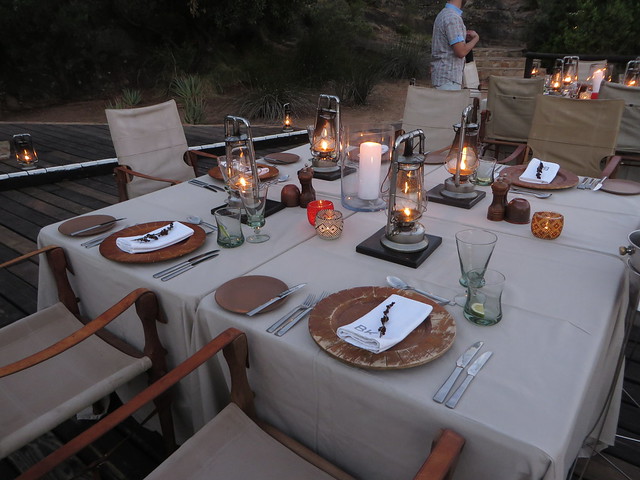 But none of these could hold a candle to the bathroom.

We could not stop praising that tremendous toilet. That remarkable restroom. That lavish lavatory. That wondrous … wiz palace? (Sorry.)

Which is not to say that the rest of the evening wasn’t incredible – it was. But I’ve been to nice restaurants. I’ve seen amazing things.

But I have never peed in a nicer toilet.

It happened on one of our last evenings in the Kloof. Reggie and Malcolm arranged for us to eat at Embers – the resort’s cliff side restaurant that was only open one day a week. The last time we visited we’d missed it; we were determined to not let that happen again.

We were the first to arrive, just after the sun had set and the moon began to rise to take its place. 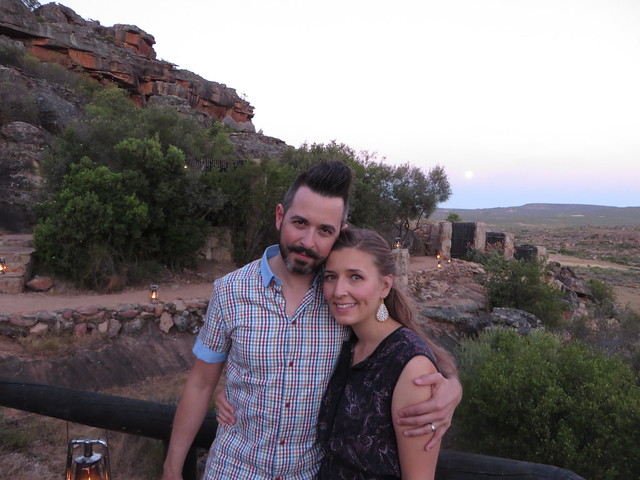 His hair is almost as tall as the moon in this photo. 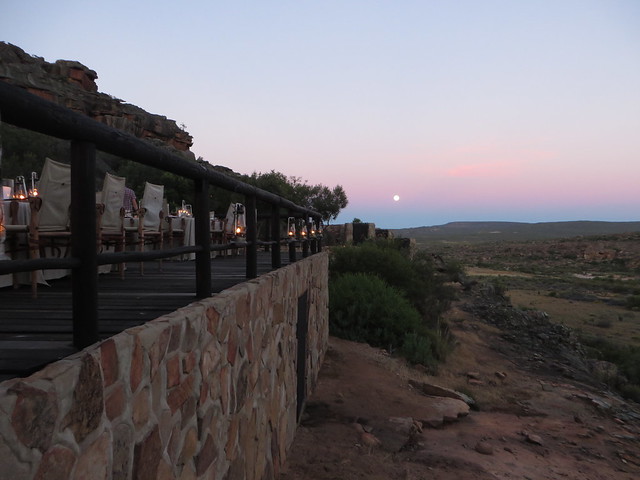 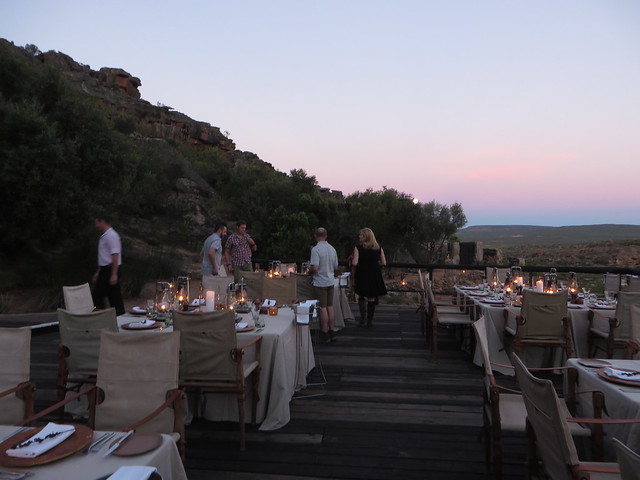 The six of us had an entire table to ourselves, set with lanterns. 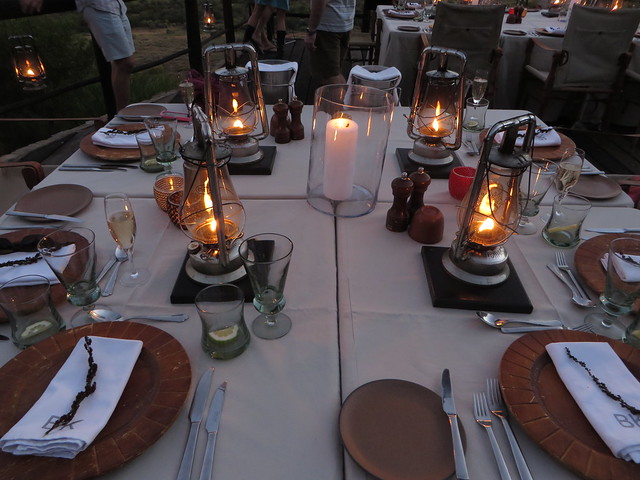 We would become increasingly grateful for these as the night wore on, and they, along with the moon, would provide us with our main source of light. 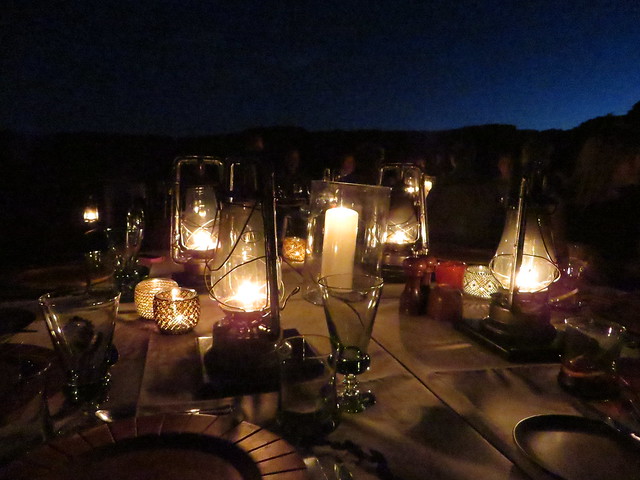 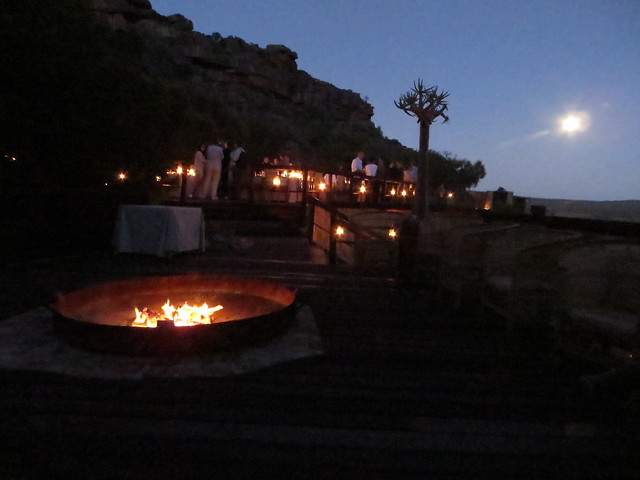 It was the pinnacle of mood lighting. And  yes, it was romantic as hell. 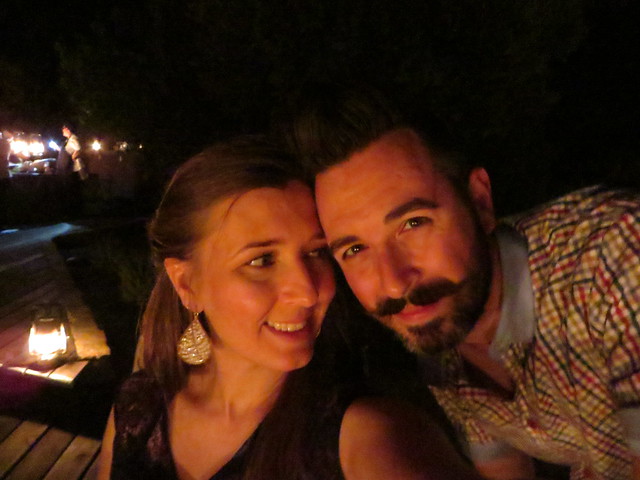 I mean, I know I’m usually a sucker for my husband. But in a restaurant built into a cliff, surrounded by flickering flames? 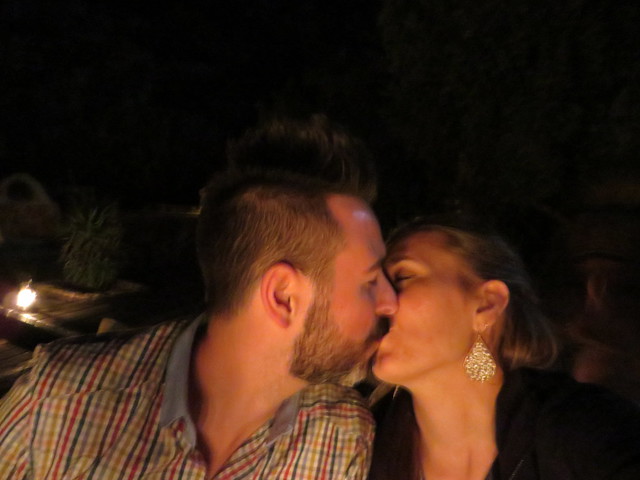 This picture is blurry because LEAVE ME ALONE I’M IN LOVE.

I am not made of stone, people. 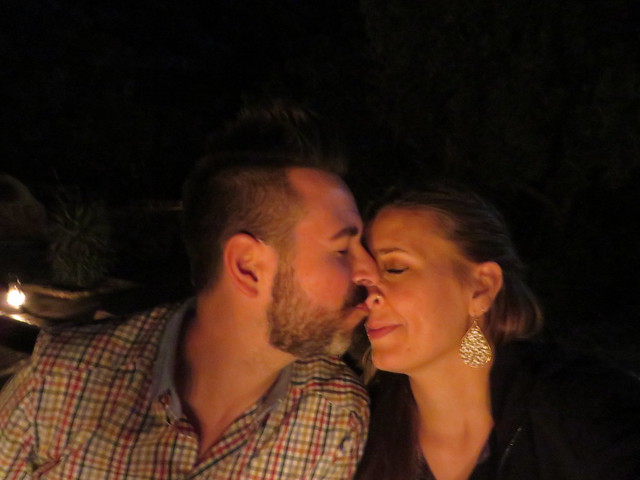 The enthusiasm with which he is mashing my face is kind of intense here.

The chefs began to cook, and it soon became obvious from where the restaurant took its name. 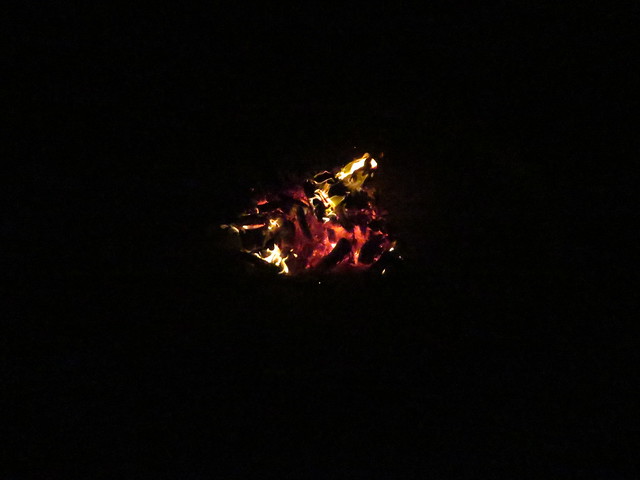 It was clearly from a guy named Ember.

I only REM-Embered(!) to take a photo of my first course. This happens when I’m having a lovely meal. The portion of my brain dedicated to blogging shuts off. The remaining parts of my cerebrum are equally divided between enjoying the company of friends and my surroundings, and shoveling food into my mouth as quickly as decorum allows. (Also, some part probably focuses on breathing and controlling my bowels. Probably.) 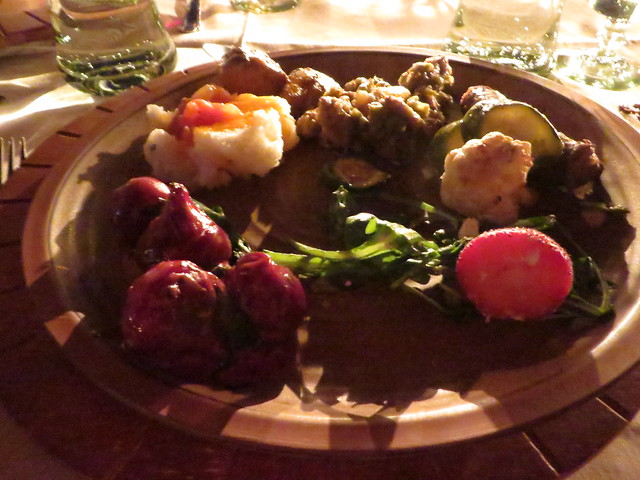 This photo does justice to no one.

At some point we, charlatans that we are, marched up to the buffet carrying our charger plates because we didn’t realize there was a stack of proper dishes up there already.

We laughed about that and so many other things. It was a fantastic dinner. 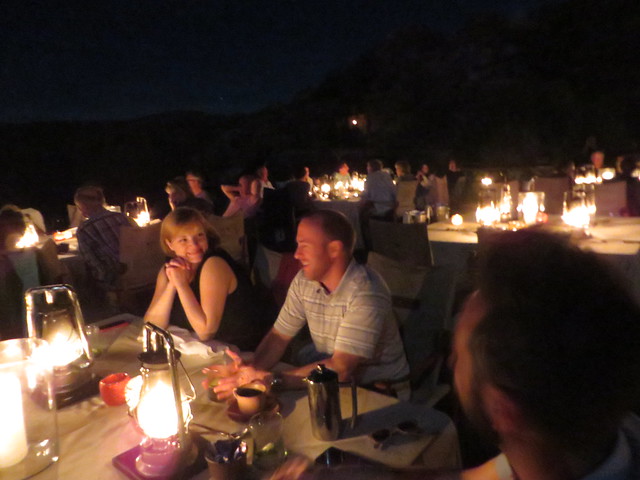 But all of this is irrelevant because I am not talking about the most celebrated crapper in my personal history.

I don’t remember who first used the facilities (it may have been Tabatha, who is small of stature and of bladder. Or perhaps it was Marshall). I know only that they returned to the table, their face full of wonder, and said something vague like, “Wow. The bathroom.”

We weren’t sure what this meant at first. I’ve been in some horrifying public toilets, and that same statement would have worked. But eventually we realized the shocked look on their face was not, in fact, horror, and there was no sarcasm at play.

I went to the bathroom next, and sure enough, when I came back, I told a similar tale.

“That was the most incredible bathroom I have ever been in,” I said.

The uninitiated remained doubtful. It wasn’t until they had seen it for themselves, had been baptized in those waters, that they agreed: this was a head to be heralded.

Photos, tragically, do not do it justice. Some things you just have to pee into for yourself. But here are my feeble attempts. They do not capture the perfection of that pulchritudinous potty. 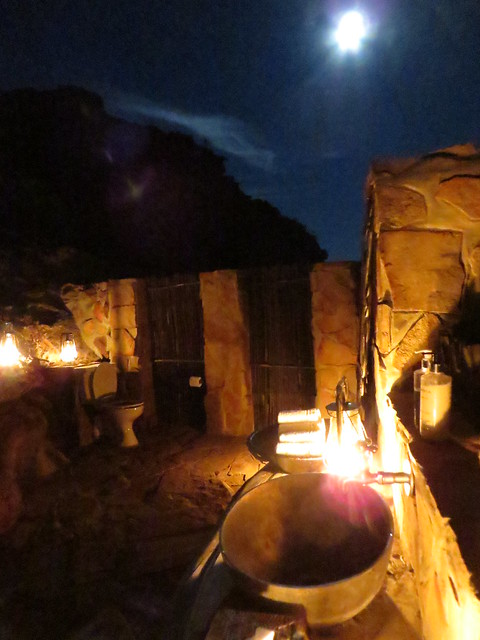 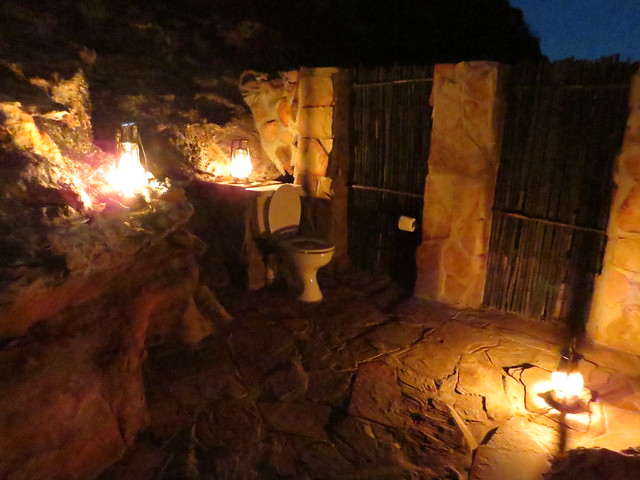 I drank a disproportionate amount of water that night in order to have an excuse to return again and again. I felt like a queen atop my porcelain throne. 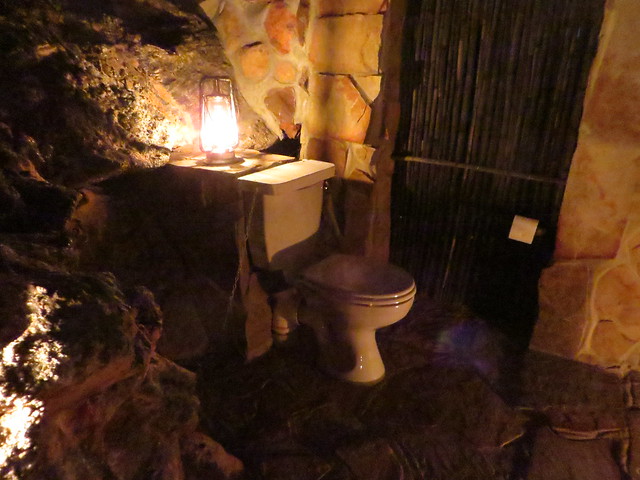 The flushing sound was like a chorus of angels.

“This,” I whispered into the night, “is the finest pee I have ever had.”

Afterwards, I washed my hands under a faucet that seemed to emerge straight from the rock face. Whoever had created this wondrous water closet had found out how to extract water from stones. 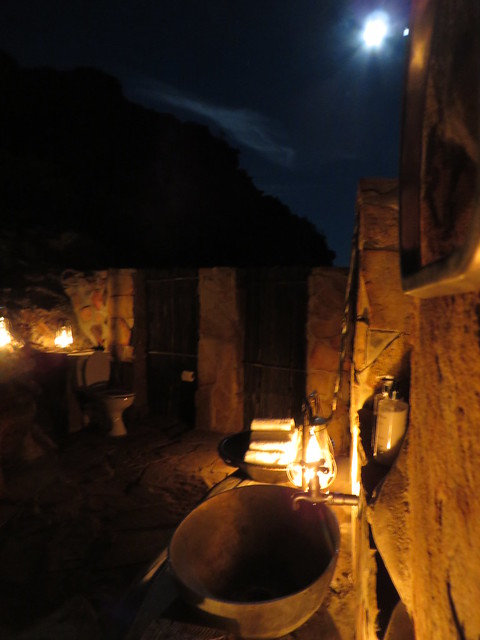 My apologies for the blurriness of this. My hands were trembling in the majesty of this opulent outhouse.

Was it alchemy? Witchcraft? Really good architectural engineering? It is not for this mortal to say. 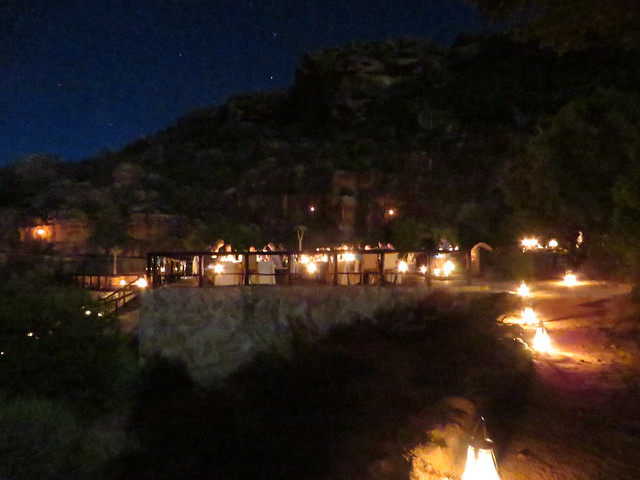 Even the walk back to the restaurant from the toilet was incredible.

I only know this: every bathroom experience before or since has paled in comparison to that night. And I suspect that will always be the case.