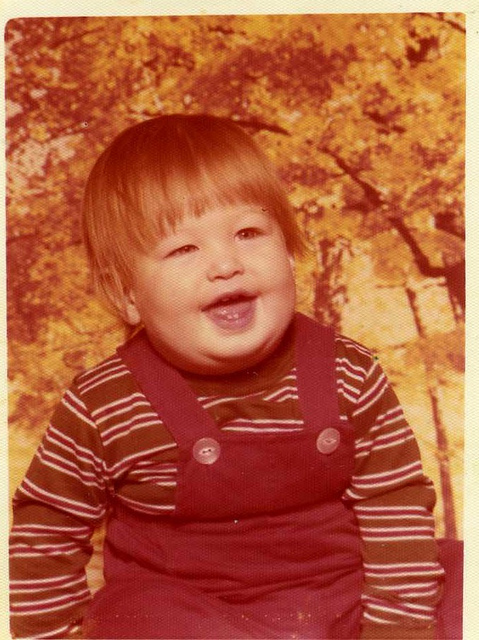 Before I begin this post, I feel it pertinent to provide a little background on my relationship with my brother. This is what happened after he shared an article I wrote on Facebook:

This was a rare moment of non-vitriol. Most of the time, I just tell him that I hate him and that he needs to get a job. Normal sibling stuff.

Ours is built on mutual animosity and resentment that has, over the years, blossomed into even more resentment. Though to my credit, I stopped kicking him the balls, like, three years ago.

This is my favorite photo of me and Edward when we were little: 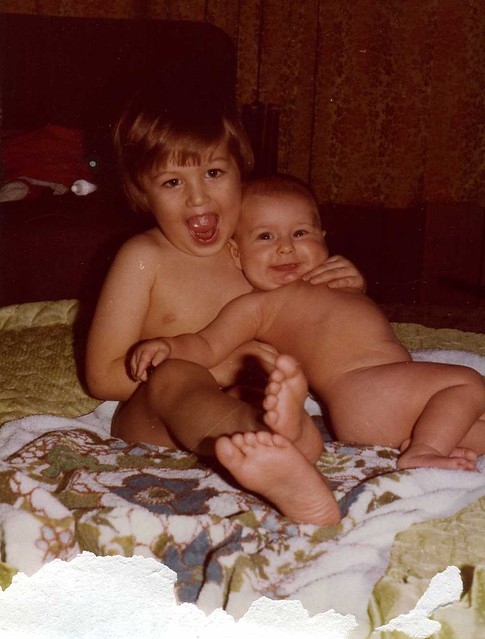 LOOK HOW GODDAMN CUTE I WAS.

It looks affectionate, but he’s trying to choke me. (This would become a theme, though most of his attacks were emotional. Which is smart, because those last forever.) Fortunately, I was built like a wee brick house, and rolled with punches quite well. Mom promised he would grow out of his seething dislike for me.

For Christmas this year, Edward and I decided to buy 23andMe kits – they’re tests that analyze your DNA and chart your ancestry. We got a kit for our mom as well, since she’d dropped several dozen hints that she wanted one.

The kit includes a little plastic vial which you fill up with spit and mail in. Notice that I said “fill up with  spit”. This is no exaggeration. I have never in the history of my life needed to conjure up that much saliva (go ahead and giggle, but know that if you make any untoward comments I will unleash a torrent of “Your mom” jokes on you so fast your head will spin. I can’t use them on my brother, so I’ve been stockpiling them for decades. Don’t test me.)

The instructions actually say that you’ll need a good 15 minutes to produce that much. Which is hilarious, because that means someone had to test that metric as part of their job.

“How long have I been spitting?”

“I think I need some coffee.”

“PUT THAT COFFEE DOWN. COFFEE IS FOR SPITTERS.”

I also collected my mom’s spit. Normally, I would complain about the handling of someone else’s drool, but this woman gave birth to me. She probably saw unspeakable things come out of my wee person in a torrent, like a miniature Linda Blair. And she’s never once laid a guilt trip on me about it, so that’s nice.

But I held a plastic vial full of her spit so now we’re totally even.

I’m sure you’re wondering: why do they need so much damn spit? The reasoning is that they don’t want anyone being tested without their consent. As we all know, swiping a small amount of saliva is really easy. But getting a whole vial from someone without their knowledge is somewhat challenging, unless you live in Vegas. Half of that city is just human DNA. I learned that on the Travel Channel.

We sent our kits in, and I like to pretend that a bunch of little rats in lab coats analyzed our results and it was adorable. But it was probably some underpaid interns who keep the leftover spit and use it to torment the new guy.

“Really good, thanks for- … You are all assholes.”

A little more than a month later Edward and I got emails saying our initial results were in. So did our mom, but she forgot what email address it was sent to. More on that in a moment.

First, a little background on my mom. She’s Italian. Really Italian. Like, born-in-Rome, came over to America a few months before I was born Italian.

Here she is in the 80s. This is what I remember her looking like when I was a kid: 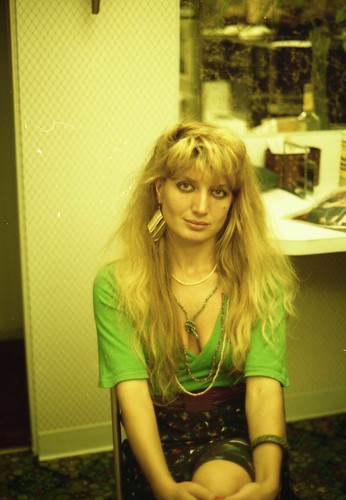 Basically, she’s gorgeous (I’ve always thought she looked like Natascha McElhone), and I was pretty sure most of her genes were recessive when it came to me. My brother looks like her, though. I seem to take from my dad. Here are my parents on their wedding day. 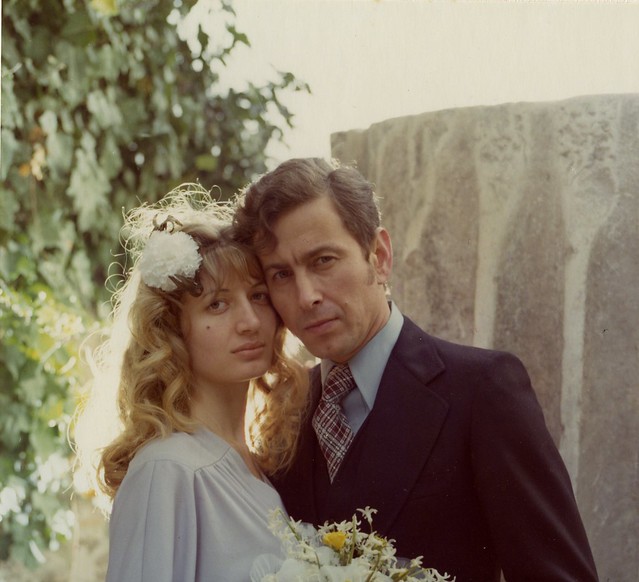 Don’t they look like they’re going to blissfully tolerate one another for at least the next 6-8 years?

I find their expressions to be fairly hilarious, because they both look like they’re awaiting the verdict of an ugly court trial. My dad seems particularly vexed, but that’s kind of just his expression. My brother and I have inherited this.

Here’s Edward with Dad a few years ago in Germany: 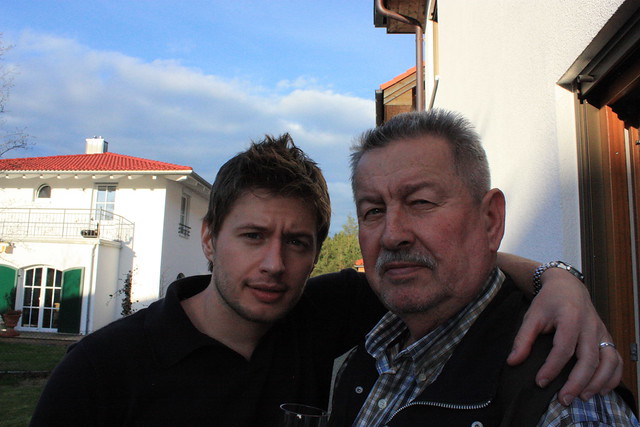 It’s like their left eyebrow is all up in their right eyebrow’s grill.

And here’s a photo of me from that same trip: 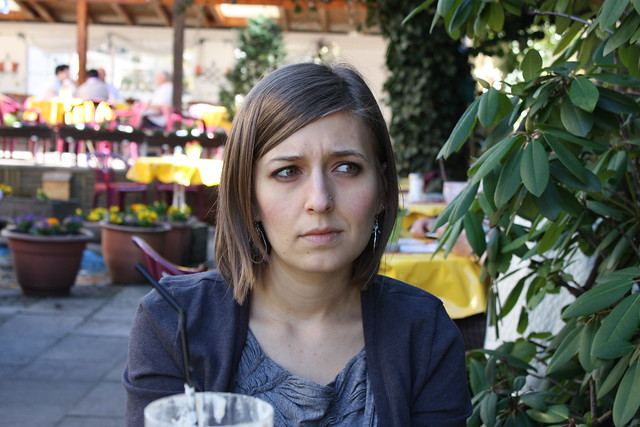 We have our father’s scowl and our mom’s coloring. Here we both are at my wedding. 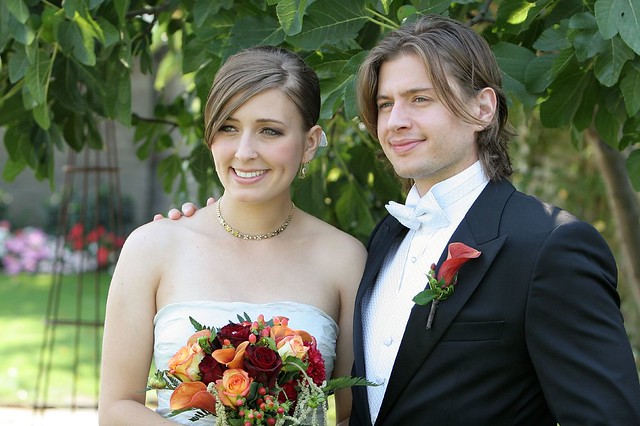 I WAS A BEAUTIFUL PRINCESS ON THAT DAY.

One more photo, and then I’m done. Here’s the four of us. It was the last time we were all together, and nobody killed each other, which is great. 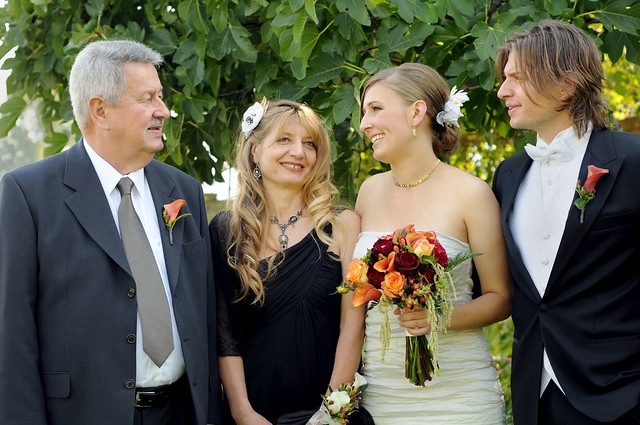 Notice how Edward and my dad have the same expression on their faces. I love this photo.

Anyway, I was raised with the following understanding: my mother is Italian. And my father is Russian (or maybe his mom was Ukrainian). I asked him to clarify, and he wasn’t really able to.

The results from 23andMe have revealed that this is a slight oversimplification, and the truth is a little more complicated. I’ve found it downright confusing, frankly. Edward says this is because of the amount of Neanderthal DNA I have. (Parenthetically, I hope he is injured in a selfie-related accident.)

Because he’s being a total dick about my results, here is a photo of him as a really fat baby. 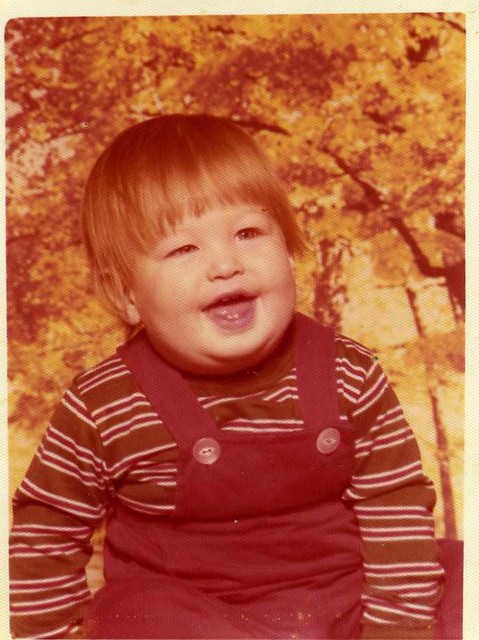 This makes up for every slumber party he ever ruined.

(I know I said I was done with photos. I lied.)

Our mom was apparently a really nervous first-time parent, and was afraid he’d starve. So she overfed him until one of his eyes could barely open. This brings me immense joy.

Where was I? Right. Our results. The initial ones came back kind of weird. Because Edward and I had a parent send in a kit, the system was able to map our genetics out by our mom and dad. But this takes a little while, and the results are always changing.

The initial results said that my dad was actually very Italian. This is hilarious, and turned out to be false. But those were the results that came out when I told my mom about it yesterday, and she promptly freaked out.

Well … wow. There is so much in that statement. There’s like, three whole therapy sessions rolled up into that one.

“What about me?” mom asked.

“Well, that’s what the test confirmed.”

“OF COURSE I’M ITALIAN. I DID NOT NEED A TEST TO TELL ME THAT.”

I think she was disappointed that the results weren’t more surprising. But then they were updated. And now they’re kind of interesting.

But I haven’t told her yet. I think Edward and I will do that together. Also, he said he might make some fake results that make sense just to mess with her. Like tell her that Dad was actually her cousin or something.

I should probably stop him, but why should I be the only victim of his torment? Plus, I think it’s sort of funny. Totally evil, but funny. That could be my brother’s tagline.

Anyway, I’ll cover our results, and my mom’s reaction to both the fake and real ones, in Part II of this post.

In the meantime, I will close with a discussion between Edward and me about our results (edited for content and extreme vulgarity). 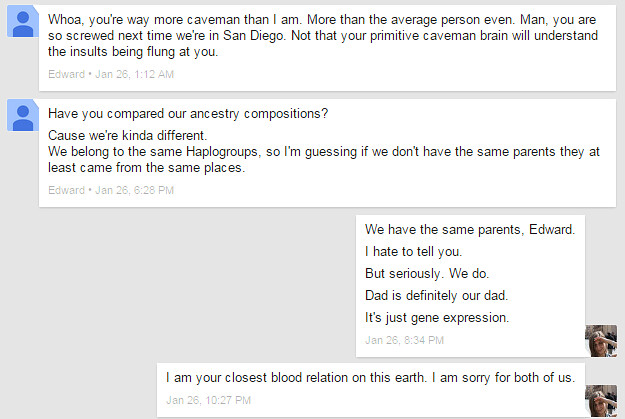 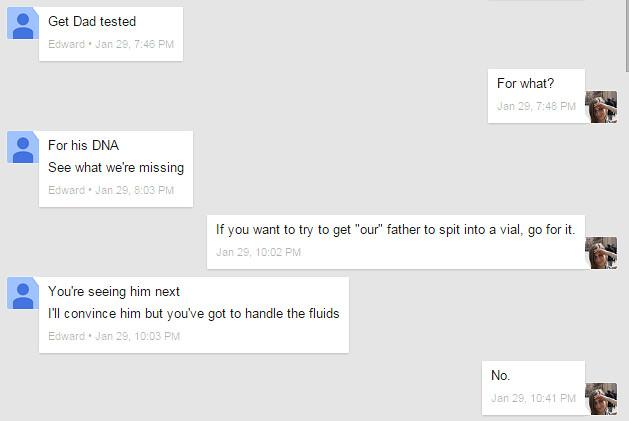 23andMe, Edward, Family, Nothing to Do With Travel