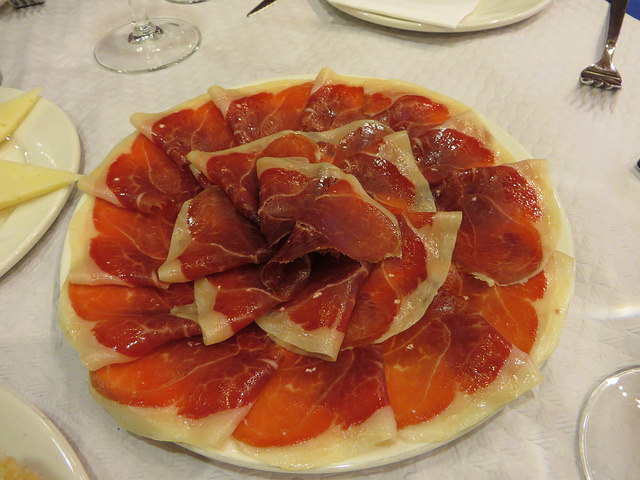 I want to continue talking about the food in Spain, mainly because I’ve gone insane since coming home and have decided to stop eating carbohydrates. Or, at least, I think I have. I’m not entirely clear what carbohydrates are. I figured it was just bread and pasta and all the other foods that make life fun, but someone told me that apples also count as carbs. And I wanted to scream because I have already cut joy out of my life, so why would I want to cut apples out, too? Apples are not a treat. They grow on TREES. Eating them should be an accomplishment akin to running a marathon. 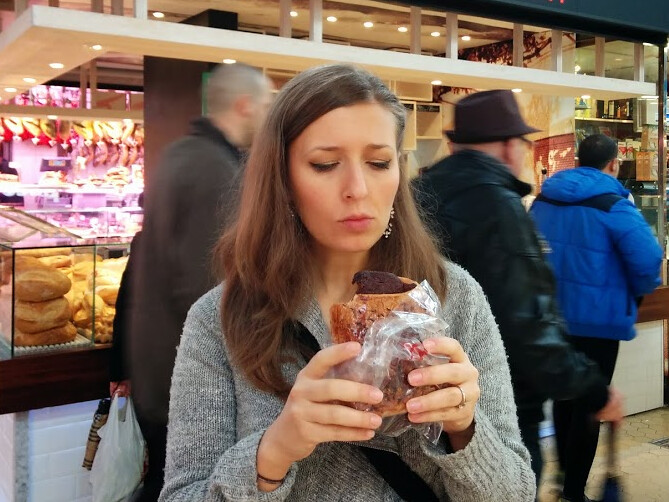 Dear god, I miss carbohydrates. Whatever they are.

But now I’m being told that apples are as bad for me as candy, so maybe I’ll just eat candy. DO YOU HEAR THAT PANCREAS? You better start making some serious quantities of insulin, and stat.

Ahem. Sorry. (This is what happens when you stop eating carbs, kids. You start threatening your pancreas. That’s a battle where no one wins.)

Part of this crazed spate of discipline (which has officially lasted longer than half of all celebrity marriages) is because we ate everything in sight while we were in Spain. Like, everything.

Even some stuff that, looking back, might not have even been food.

I decided to list some of our wiser choices. I’ve covered some of this stuff before, but I’m old enough now that I can repeat myself and none of you get to say anything.

(Note that some of these specialties don’t just apply to Valencia – they apply to Spain as a whole. So don’t email me with your geographic disputes and pedantry, because my blood sugar is way too fucking low for that noise.)

Here’s what you should eat while you are in Valencia:

I love talking about Paella because everyone fights about what should be in it. Fortunately, I’m used to the way the Italians fight, which is generally screaming at the top of your lungs and occasionally insulting your ancestors, in a way that makes the Spanish Inquisition seem quaint and adorable. So what does go in paella? As far as I can tell, it’s rice, rabbit, squid, green beans, half-naked photos of Harrison Ford from the 1980s, and basically anything else that, upon seeing, you’d want to immediately put in your mouth. 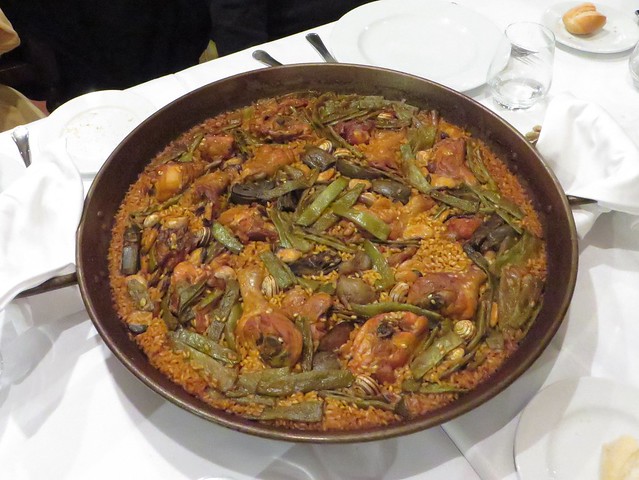 It’s all cooked over an open flame in a pan that’s roughly the size of a coffee table, so the bottom gets a crispy layer on it that is called socarrat, which in Spanish means “This is the best thing you have ever had in your mouth, ever, and yes, we realize how pervy that sounds.” I’ve actually heard that you can only eat paella in the middle of the day, because you need to take a siesta afterwards, presumably curled up next to the paella pan, and whatever leftovers you couldn’t stuff into your mouth.

And then you whisper to the paella that you love it, and it will reply, “I know.”

I realize that these are different things, and lumping them together is sort of blasphemous, but I am a busy woman, and all these Han Solo pics aren’t going to save themselves onto a Pinterest board named “Girlie Boner.”

Churros are tubes of dough which are deep fried. This alone would be enough for most humans, but this is the Spanish we are talking about. Have you seen the Sagrada Familia? These are not a people who embrace subtlety. They take subtlety, deep fry it, and then they serve it with a dipping chocolate that is so thick and dark it will break your heart. Or they roll it in sugar. (Admittedly, sugar seems kind of lackluster compared to the chocolate, but it’s still pretty damn good).

Buñuelos are equally deep-fried, and either rolled in sugar or served with chocolate, but the dough itself is shaped into rings, and often has squash or pumpkin mixed in. Some people object to vegetables in their desserts, but how else would vegetables get eaten? Besides, they make the buñuelos gooey.

If someone dismisses these are mere doughnuts, you are entitled to slap them across the face while yelling, “And Gaudí  was JUST an architect?”

You will come across as both cultured and unhinged. Which I’ve heard is really sexy.

Okay, I’ll admit that “nutsedge” isn’t a very pretty word, and sort of sounds like a venereal disease.

“I went out with him twice before he told me he had nutsedge.”

And “tubers of the nutsedge plant” sounds even worse. But I swear to you that horchata, a drink which is made from just that, is really good. 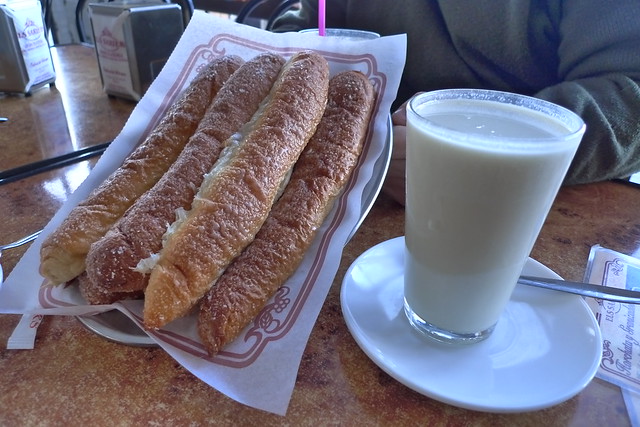 Horchata with a side of fartons. (Photo credit: Nacho Pintos, via Flickr)

I realize it sounds like a potato milkshake, but … damn it. I am really not selling this, am I? It was too cold to get horchata last time we were in Spain, but in the summertime, it is absolutely perfect – nutty, creamy, icy. It’s served with a long sort of pastry called, um, … a farton.

I KNOW. I KNOW. Look, just trust me on this one, okay? I never thought I’d live in a world where one of the sexiest guys around was named Benedict Cumberbatch, but here we are. 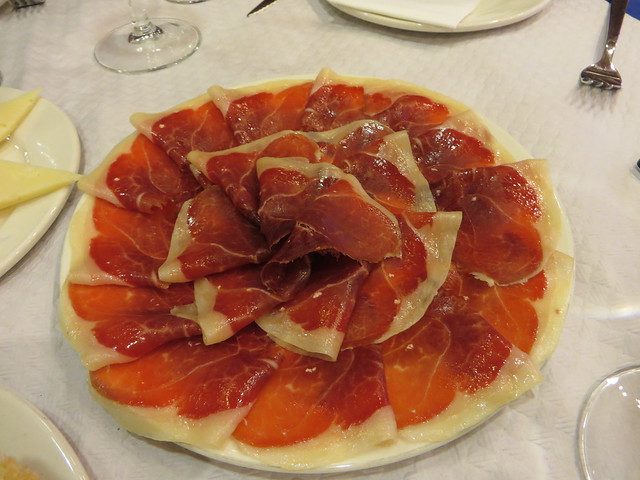 In the U.S., ham is a mixture of a pork and nightmares. In Spain, though, it’s an entirely differently animal. The Spanish are obsessed with cured ham, and any good restaurant will have dried pig legs hanging from the ceiling, which is both grotesque and awesome, and probably why nobody messes with Spain.

What you need to remember is this: Jamón Ibérico (sometimes called pata negra – a word which is whispered like a prayer by foodies everywhere) is the most expensive, and comes from black pigs. Jamón Serrano comes from white pigs, and is leaner and considered less of a delicacy, but honestly? It’s still really effing good. If you are a charlatan (and you probably are!) you’ll be happy with either, but the easy way to check what you are getting is to look at the nail on the hoof, which is still attached to leg of the ham being sliced. (If this horrifies you, then you aren’t ready to eat meat.)

If the nail is black, you are usually getting pata negra. The problem is that less reputable places often paint white nails black, and pass off Serrano ham as Ibérico.

I shit you not – they are making counterfeit ham and authorities are trying to crack down on it. I have never been to a country with their priorities more in order than Spain.

Some people don’t like fish, and those people are idiots. We should be grateful for them, though, because they are, in their idiotic way, saving the planet and leaving more fish for the rest of us. 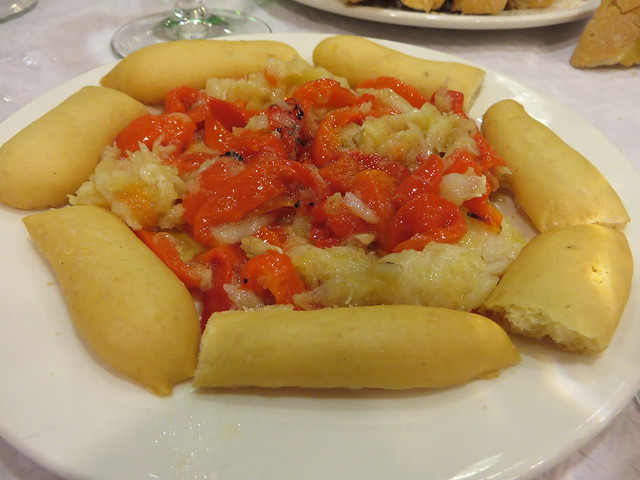 Esgarraet is cured salt cod, mixed with sweet red peppers, garlic, and olive oil. It’s basically like getting punched in the face by the essence of umami itself. If someone says they don’t like fish, tell them they would hate this. Then you don’t have to share. All hail the idiots.

People will say that they’ve had this before, but usually they’ve just had the Trader Joe’s knock-off. Calling that Manchego is like saying you’ve been to Disneyland because you took a creepy photo with an unlicensed character in Times Square one time while drunk. IT IS NOT THE SAME THING.

True manchego is makes from sheep’s milk, and is salty and crackly on your tongue like a savory firecracker (parenthetically: I suck at analogies). 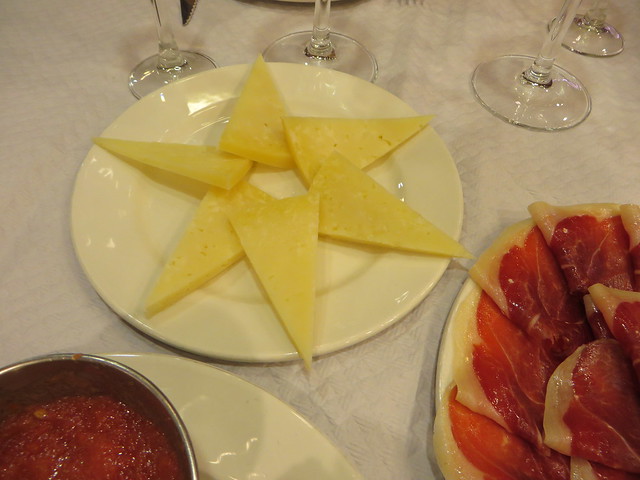 I’m not even supposed to eat cheese, because it gives me migraines, but I crammed this into my mouth with unfettered urgency, and when my husband asked me if that was a good idea I replied, “SHUT UP, IT’S WORTH IT.” I don’t think he understood what I was saying, because my mouth was full of manchego, but my passion was conveyed, and that’s what’s important.

Pan con tomate is the best supporting actor of all Spanish food – you tend to overlook it, you forget its name, but everything else would fall apart without it (sort of like that one actor … crap … you know. That guy. The one who’s in everything.) It’s a simple formula: fresh crusty bread, smeared with the slimy inside of a tomato, drizzled with some good olive oil and salt, and occasionally, but not always, black pepper. I know that doesn’t sound like much, but neither did that guy I dated 20 years ago, and he was carrying on with me and at least two other girls. (As angry I was, looking back I can only be impressed: I’ve never seen anyone do more with less.)

My point is: sometimes things are greater than the sum of their parts, and sometimes love is a mystery. Eat the damn bread. It’s delicious. 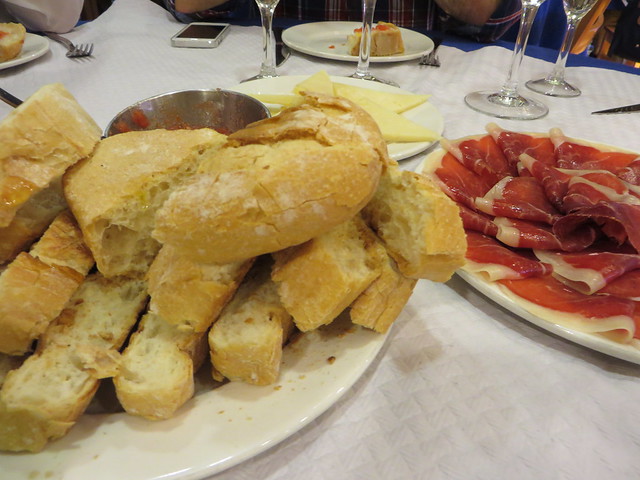 That’s all I can think of right now. I’m sure there plenty I’ve overlooked in my carb-deprived state (feel free to add them in the comments). In the meantime, I need to go make out with a loaf of bread.