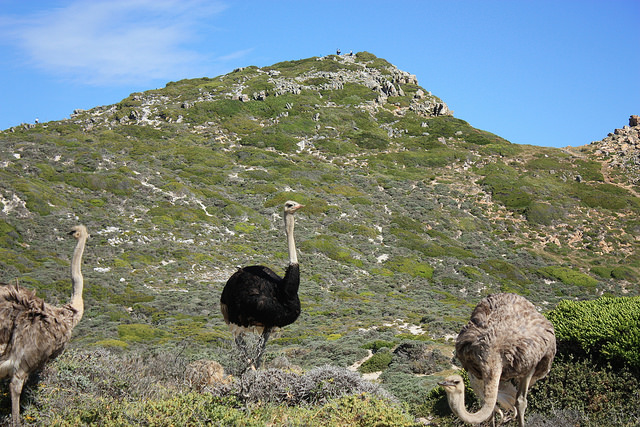 Okay, where was I before yesterday’s digression into the flightless birds of South Africa?

Oh, right. I was telling you about the Holy Grail. Arguably one of the most important relics in all of-

Err, sorry. Heh. That was weird. The Holy Grail. One of the most important relics in all of Catholicism. Ahem.

Anyway, when we were in Spain, I decided to visit the Cathedral in Valencia which is home to the Holy-

Um. No. Not the Holy Ostrich. The Holy-

Uh … Anyway. In one corner of the cathedral is a little chapel that is dedicated entirely to-

GAH. Okay, listen brain, we went through this yesterday, when you interrupted my attempts to talk about the Holy Grail with your rant about penguins. I did what you wanted. And now I get to write about-

No. No, I get to write about something other than flightless birds in South Africa. Like our trip to Spain, okay?

When a problem comes along, you must ostrich.

Oh, dear god. What are you doing?

Before the cream sets out too long, you must ostrich.

Are you singing Devo? And replacing “Whip It” with …

When there’s something going on, you must ostrich.

That doesn’t even make any sense. YOU ARE NOT MAKING SENSE.

Huh. And here I am, telling you I want to talk about ostriches.

So, if you are me, and I want to talk about ostriches, what does that mean?

Ostriches. Another species of flightless bird that we saw in South Africa. You’d think that this would not be a subject I’d need to dwell on. Flightless birds are basically the saddest thing ever, right? The only cool thing about birds is that they get to fly, and poop on their unsuspecting enemies from dizzying heights.

Which we’ve all fantasized about doing, right? I mean flying. We’ve all wished we could fly.

And actually, we’ve probably all wished that we could poop on our enemies, too.

Anyway, the point is: being a flightless bird conceptually sounds like one of the worst things in the world. Like you are at the bottom of the bird pecking order. Underneath pigeons.

Unless you are an ostrich. Because let me tell you something of critical importance: ostriches are absolutely terrifying. I’m fairly certain that if you put virtually any other bird up against an ostrich, the ostrich would win, provided that it didn’t at some point become a battle of wits. 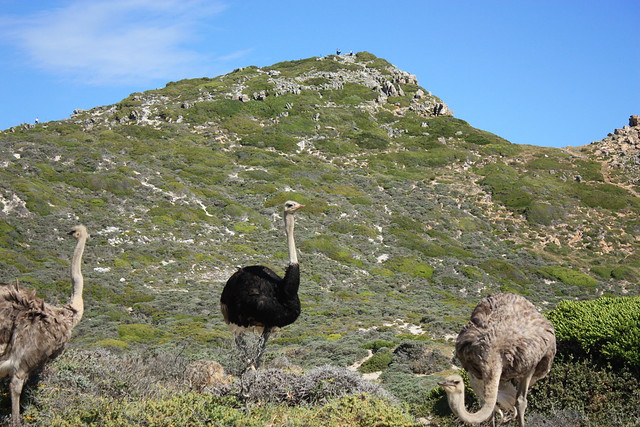 Then the ostrich would lose. Because ostriches are very, very stupid. You’ve probably heard the rumor of how the brain of an ostrich is smaller than its eye? Well, that’s true. Ostriches are moronic. You know who else is moronic? These people: 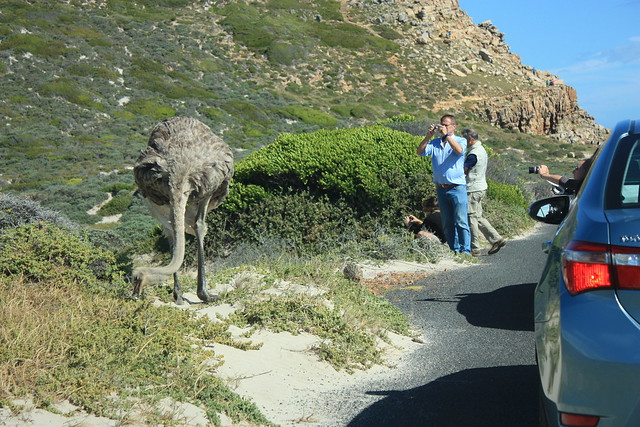 You absolutely do not want to get this close to an ostrich.

Because ostriches are HUGE. And they have massive talons (imagine the claw equivalent of a six-inch curved blade). They are idiotic and they are armed. THEY’RE THE BIRD EQUIVALENT OF THE STATE OF FLORIDA.

And they are all over the Cape of Good Hope. As we approached the tip of the Cape, we had to slow down – not because of traffic, but because of ostriches. 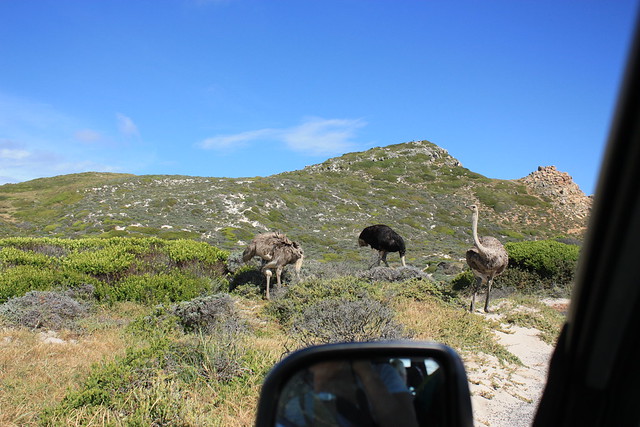 Which wasn’t all that bad, because there were also BABY OSTRICHES: 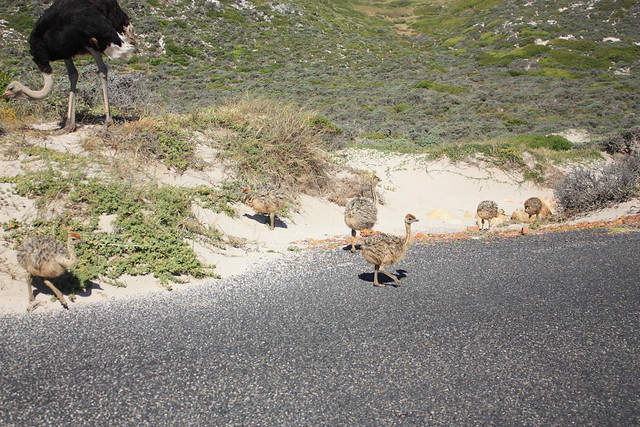 They were super cute and absolutely brainless. They ran straight into traffic. Granted, human toddlers do that, too. But at least we grow out of it after a while. The ostriches do not. 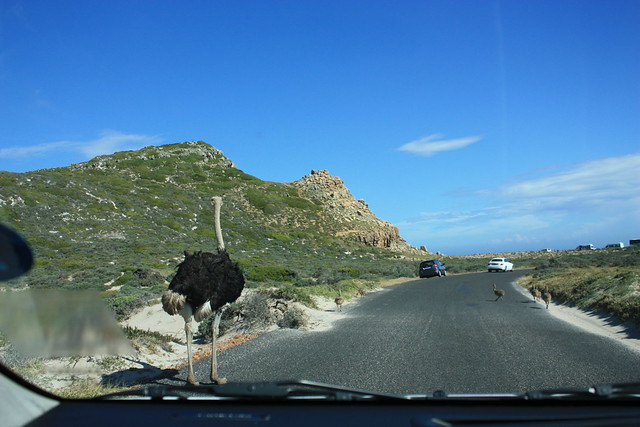 “Mom, we’re going to play in traffic!” “Not without me you aren’t.”

Seriously, I don’t know how they weren’t driven to extinction on account of their sheer stupidity. But I guess that’s where the whole being-huge-with-talons thing comes into play. As long as you’re big enough to scare people, you can be an idiot.

(Someone tell the Florida tourism board I have a new slogan for them.)

We kept our distance, though sometimes it was hard to do that. Amazingly, these giant, lumbering dimwits blend incredibly well into the background. 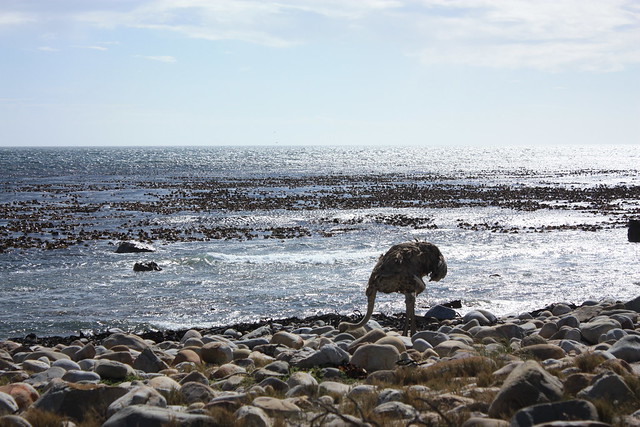 Notice how she’s the exact same color (and roughly as intelligent as) the surrounding rocks.

Which … isn’t actually that bad of an idea. But hey, even a stopped clock is right twice a day.

It’s easy to see how the myth came about. It’s hard to see an ostrich’s head when it’s anywhere near the ground. It does sort of look buried. 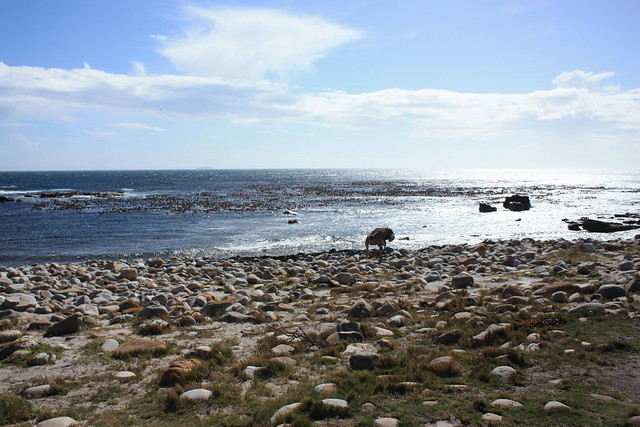 This one just kept pecking at rocks. 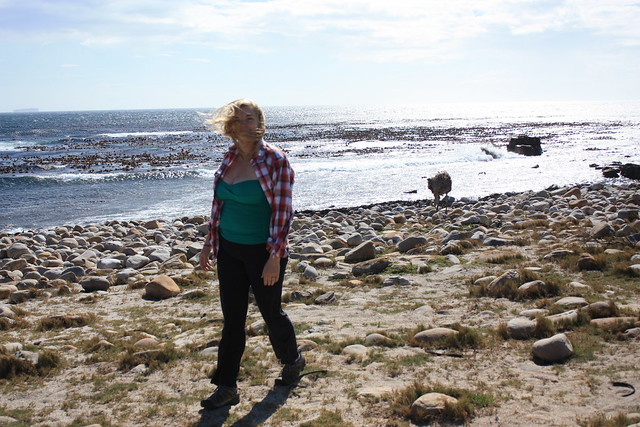 Sarah thought it was hilarious, so she jumped in the picture. Note the reasonable distance between her and the giant idiotic bird.

I have no idea what it was doing. There was nothing edible there.

When a problem comes along, you must ostrich. 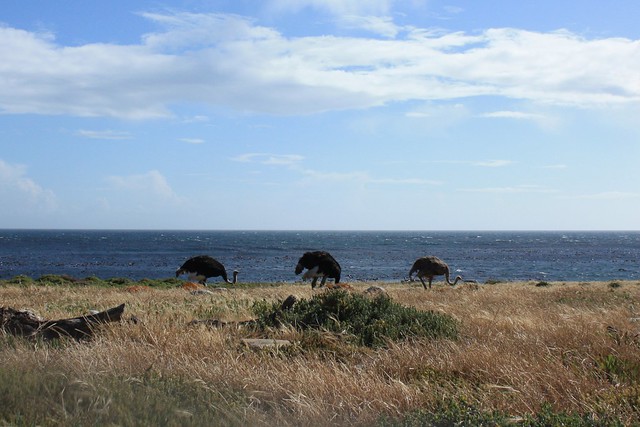