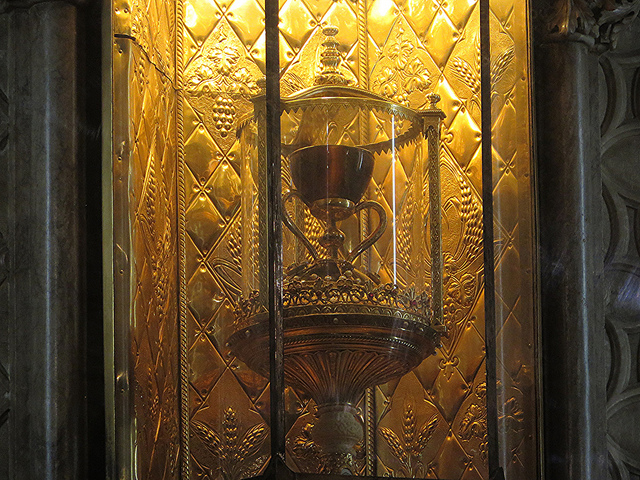 “Is that …” Lisa trails off, never taking her eyes off the contents of the elaborate metal shrine in front of us. 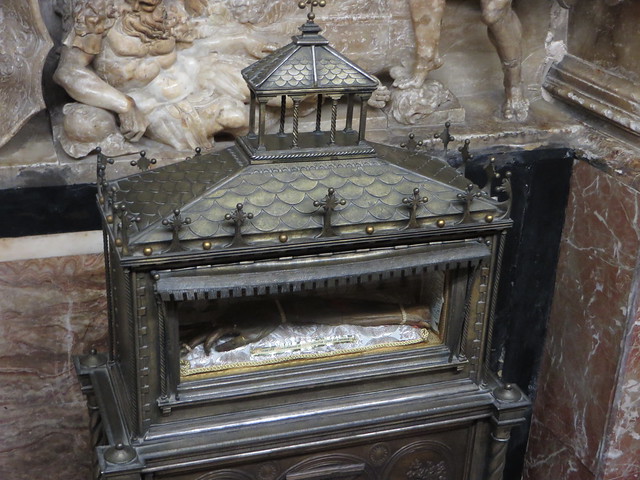 She is wordless for a moment, staring at the left arm of (according to a nearby placard) St. Vincent the Martyr. Then she looks back to me, as though expecting some sort of explanation.

I offer a slight shrug.

“We don’t have enough remains of saints to have all of them on display, so sometimes we only have body parts,” I say. I have no idea what I’m talking about, but I keep going, anyway.

In Sienna, I remember, there was a head on display. I don’t tell Lisa this.

I realize my answer only explains why there is an arm in front of us and not the whole saint. It doesn’t address the other part of her unspoken question: why it’s on display in the first place.

“It’s a Catholic thing,” I add, hoping this will be enough justification. Lisa has used that same reasoning with me countless times before.

It’s a Norwegian thing, was how she explained the horrific salted licorice she loved; it was how I filed away her 15-minute diatribe of why the Swedish Chef from the Muppets was awful.

(“I fucking hate him,” she said to me between puffs of a pilfered cigarette on the afternoon that we met. In the 3 minutes we’d been talking, I’d already seen photos of her toddler, and was now learning which Muppet she found most offensive.

Some friendships are like that. They don’t have a beginning, but instead start in the middle. Minutes pass, but somehow you’ve known each other for years.)

Now we stand in a church in Spain, staring at the sacred severed arm of a saint in front of us. It looks not unlike turkey jerky.

It’s a Catholic thing. I suspect Lisa thinks I’m crazy – an assessment which I don’t mind all that much. I’ve thought the same of her before. Because, frankly? I love the Swedish Chef.

I grew up Roman Catholic. As far as religions go, it’s the closest one to an 80s horror movie. There’s lots of gore, and things don’t really turn out great for any of the characters involved.

When I was three or four, I somehow got the impression that Jesus’ bones were actually inside of the altar near the priest’s pulpit in our church. The bones of Jesus, just sitting there, chilling. I wasn’t even a kindergartner, and the idea of my savior’s remains sitting 100 feet away from me didn’t make me blink at all because it’s just how Catholicism works. When the people you love most in the world go around wearing tiny crosses with little crucified bodies nailed to them, you get desensitized to a lot of stuff.

Of course, I suffered from extreme, anxiety-inducing guilt, and I didn’t sleep through the night until I was 21 or so, but I’m sure all of that is unrelated.

And then I fell in love with a secular Jew, who had twinkly eyes and loved to eat pork. It was all over after that. I resolved that  I was probably gonna burn for eternity, surrounded by the people I loved. (Except grandma. She’s totally in heaven.)

But I still think of myself as Catholic, even though I haven’t been to mass in years. Churches remain familiar to me, with their echoes and drafts and the scent of old wood and guilt hanging in the air. I walk in, I dip my finger in holy water, and I cross myself without missing a beat, more out of old habit than devotion.

When we were in Valencia, we visited the Chapel of the Holy Grail, in a tucked away corner of the Cathedral of St. Mary. I went with my friend Lisa, aforementioned eater of salted licorice and renowned Muppet-hater, who I have chosen to embarrass with the following photo: 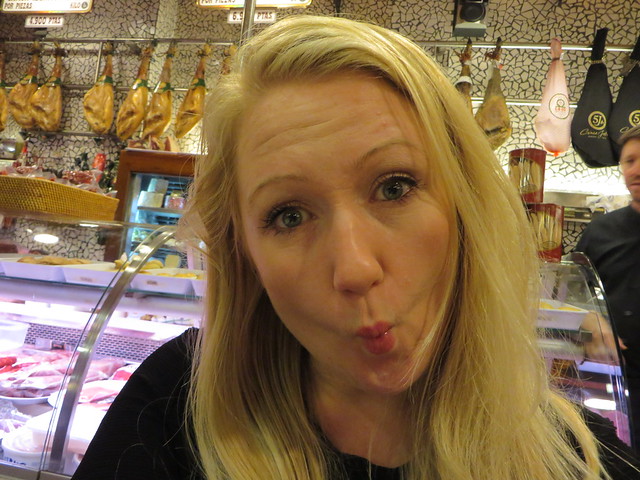 I love you, Lisa.

Let that be a lesson to those of you who take pictures with my unattended camera: the world will see them.

Lisa and I were joined by her colleague Bas (Rand said he had work to do, but I think he doesn’t like churches all that much. Whenever I drag him into one, he whispers that his skin is burning and we have to leave. I’m not kidding. He actually does this). The three of us walked through the rain and drizzle to the cathedral, which sits in a crowded little square in Valencia, barely popping out over the similarly colored buildings, and surrounded by a maze of streets. 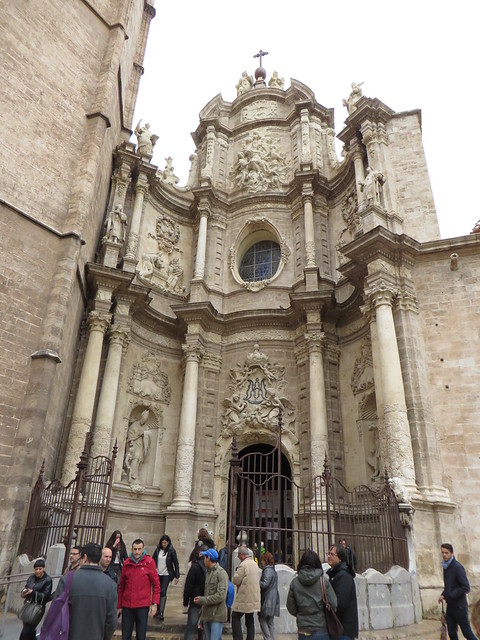 We arrived in the late morning on a weekday, and the church was relatively uncrowded.

We went straight for the Holy Grail, because while the rest of the church is lovely, let’s not kid ourselves. We weren’t there to see to the opening band. The people who worked there tried to dissuade us – they told us to appreciate the other works before visiting the grail. Which is like going to Louvre and telling people not to start with the Mona Lisa. It ain’t gonna happen, but it’s fun to pretend.

Now, despite having been raised Catholic, and attending Sunday school, and having been confirmed in the church, I feel compelled to admit that most of my knowledge about the grail itself comes from Indiana Jones and The Last Crusade. Rand keeps telling me that movies by Steven Spielberg cannot be used as a source in historical discussions, so I probably shouldn’t reference that. 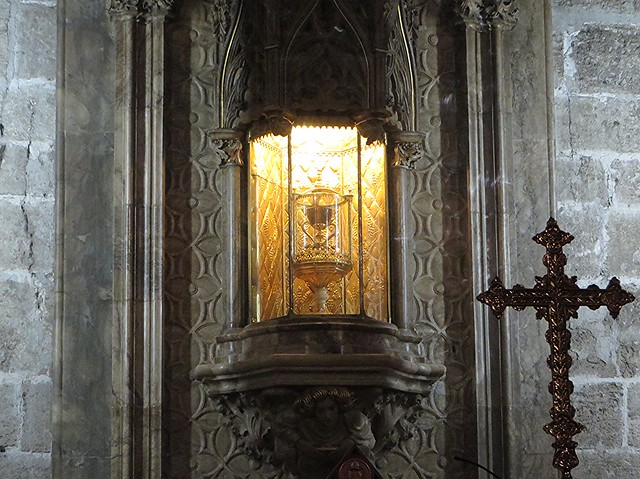 But if you are anything like me, you will be somewhat disappointed to learn that it doesn’t really look like the cup from the movie, and Harrison Ford is absolutely nowhere to be found (which is probably good, because I’d have tried to make out with him, and that sort of behavior is frowned upon in church). For even a lifelong sort-of-Catholic, it was a bit anticlimactic. 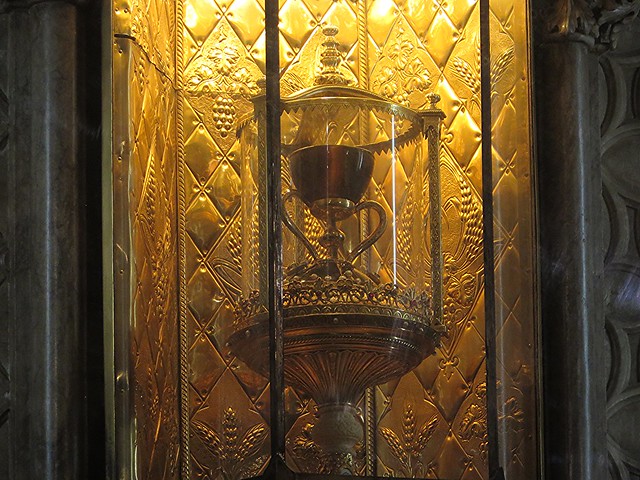 The grail was encased in a sort of gold brace, and was behind glass at the back of a chapel, so this was about as close as I could get: 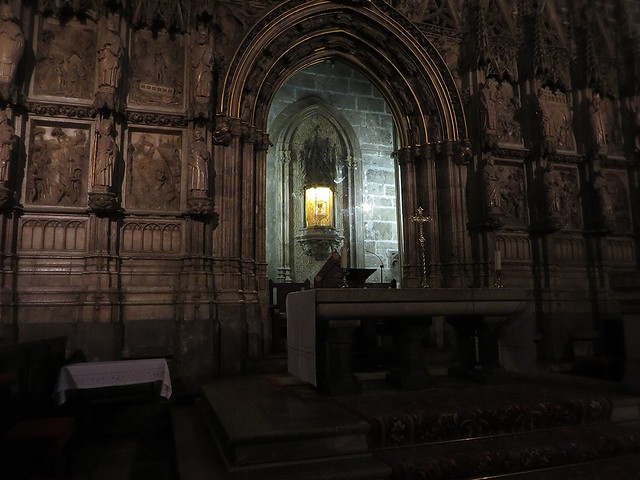 I found myself staring at it, and wondering exactly how any one knew that this was, in fact, the cup from which Jesus drank at the last supper. Later, I’d find out that this cup was one of 200 supposed grails in Europe alone. The most recent frontrunner to emerge as the real thing is a jewel-encrusted cup that sat virtually unnoticed in a small Spanish museum until last year.

Having seen the main attraction, we wandered around the rest of the church. It was as gilded and ornate at Liberace’s fingers – which, as far as Catholicism goes, is pretty tame. 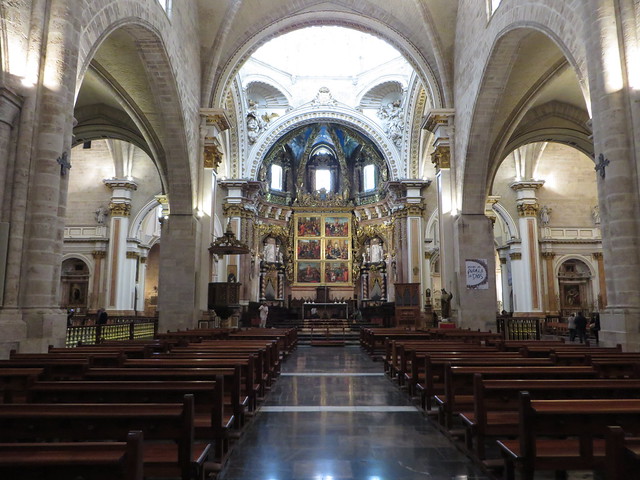 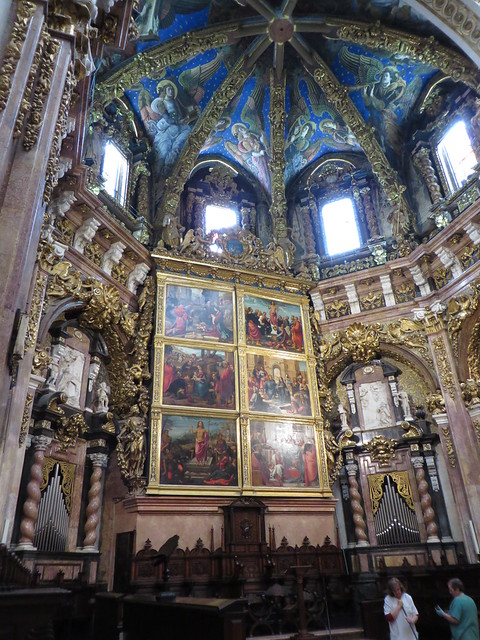 It was around the back of this altar that Lisa and I found the glass case containing St. Vincent’s remains – holy but not whole. No wonder I thought I thought Jesus’ bones were inside the altar when I was a kid.

I stared, realizing that this mummified arm was the one definitive thing we’d seen. The grail might have only been one of many, and this left arm might not have been St. Vincent’s, but it certainly was someone’s. 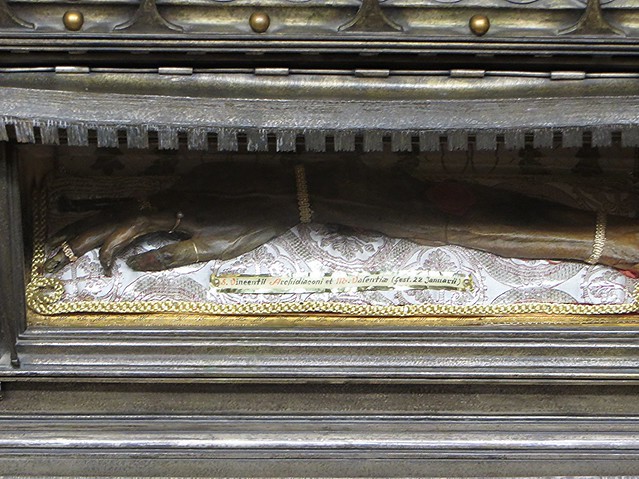 But then the more I looked at it, I realized … it kind of looks like a right arm, doesn’t it?

I started to question the description, and then realized that mummification could cause a left arm to look like a right one, and the entire train of thought seemed mad. Whatever it was, it was someone’s. And I needed to respect that. So I crossed myself, there in front of the relic, and again as we left the church.

I knew Lisa had more questions. I knew for her, the visit to the Church had been more foreign that it ever would be for me. But I wasn’t sure what explanation to offer other than the one I’d already given.

It was a Catholic thing. That’s really all there was to it.