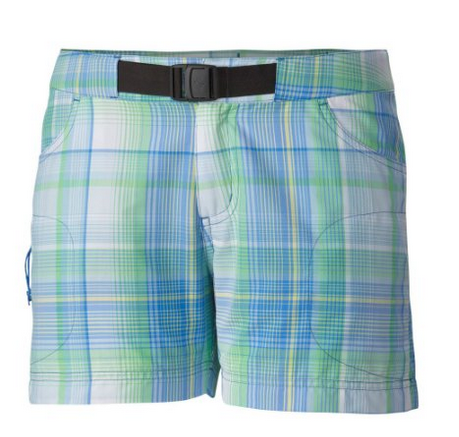 Posted in: Rants and Raves

When I’m not complaining about things that I have voluntarily brought upon myself, or tormenting my husband, I’m a travel writer. Since my beloved refuses to check luggage, a large portion of my time on the road is spent washing my underwear in the hotel sink and sniffing my shirts to see if they can be worn “just one more time.” (Because, as my friend Ruth would say, “I’m a goddamn lady.”) 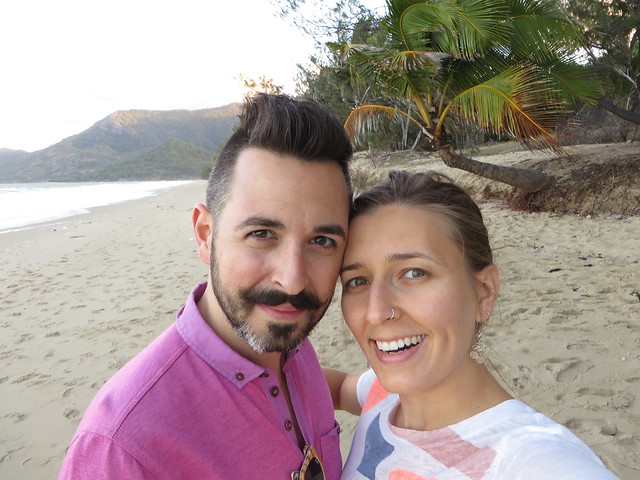 And I have to travel with a guy who is effortlessly fashionable, while I look like I’m in the middle of doing laundry.

Despite that, I can’t bring myself to buy clothing that’s actually intended for travel. I’ve tried, time and again, because it seems to work for travel expert and human turnip Rick Steves. He traipses across the globe – from beaches to mountains to formal events – looking like he’s about to do yard work. There’s brilliance in the paradox he creates: by being appropriately dressed for nothing, he is ready for anything.

His approach is brilliant, as long as you don’t mind looking like a sartorially-challenged substitute math teacher. I’m sure Steves has attained some sort of REI-sponsored inner peace which eludes me because I refuse to wear pleated khakis.

But I still diligently search the e-commerce bowels of the web, hoping to find something both travel worthy and cute. It’s a hopeless endeavor, fraught with with chinos. Today’s rant was fueled by the brands, trends, and articles of travel clothing that I came across in my most recent foray into polyester hell. This is why I still don’t own travel clothing. And probably never will.

Travel Brand Names That Were Thought of While High

I have tried to figure out how one of the most prominent travel clothing brands got its awful moniker, and this is the only thing I could imagine:

“We need a brand name that’s awkward for everyone involved, and one that also lets young people know how out of touch we are.” 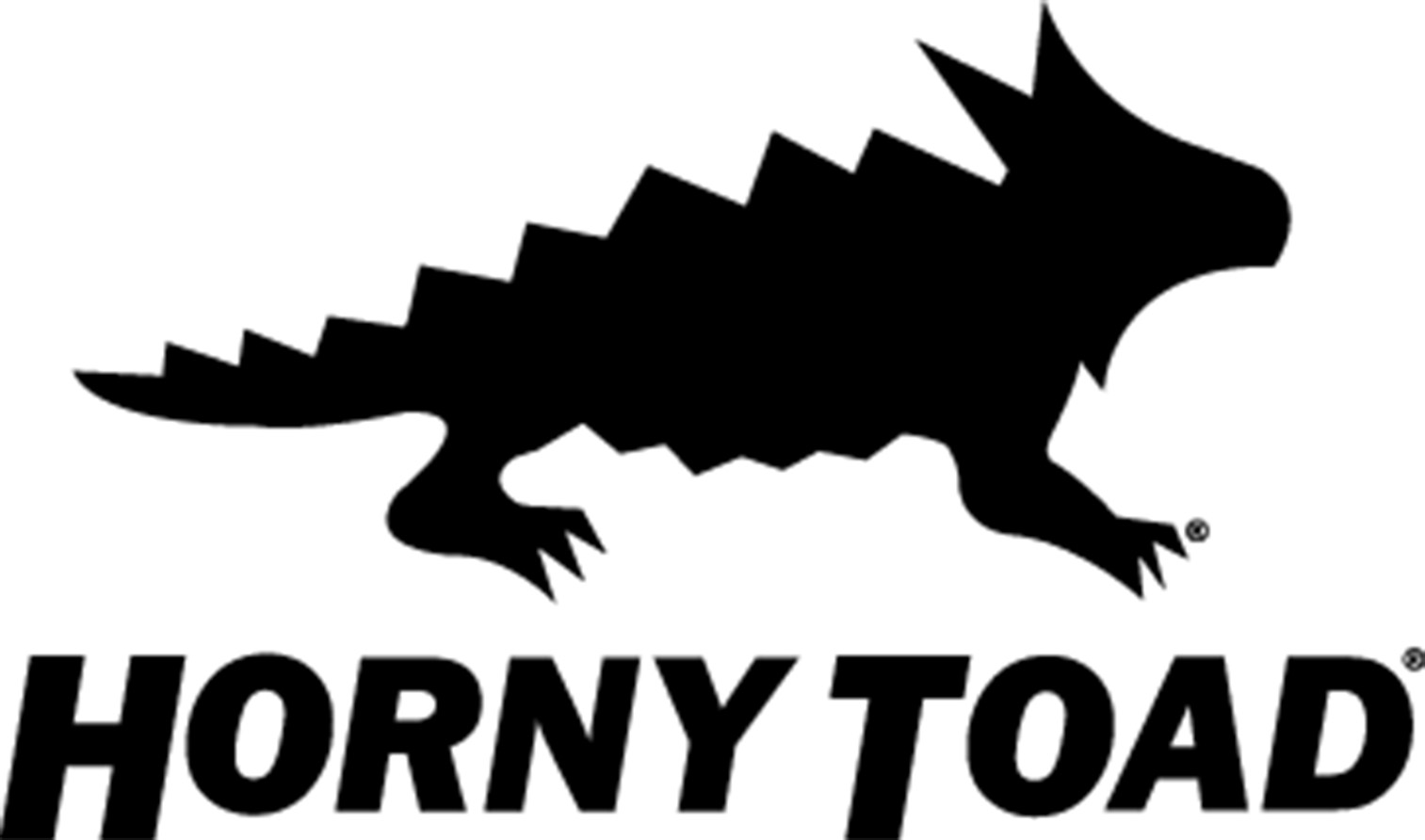 I guess the peyote wore off, because they’ve now changed their name to Toad & Co. Which is sort of a lateral move.

Their naming convention for clothing isn’t much better:

“We have a serious problem.”

“Is there anything we can do?” 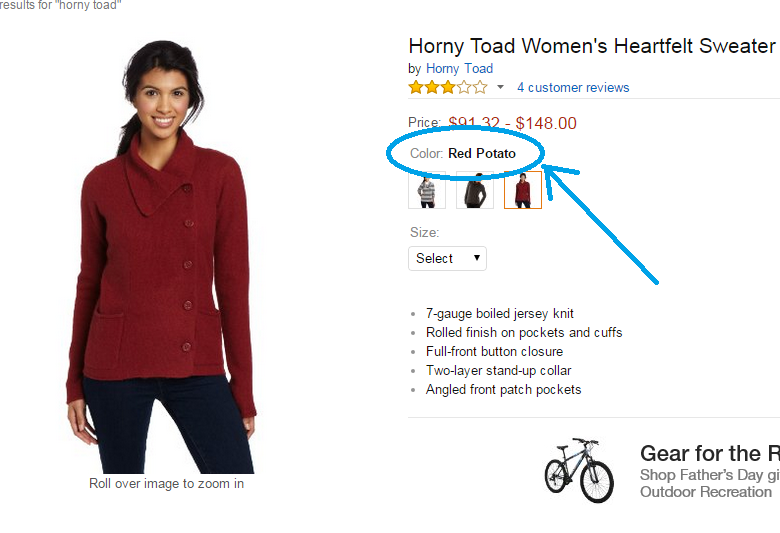 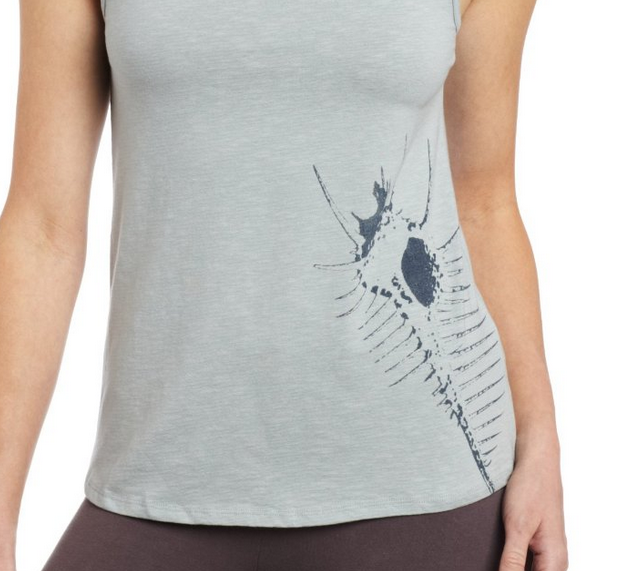 I want all my goddamn clothing to have giant shells screenprinted on it.

Apparently everyone who designs travel dresses went to the same school of design, if by “school of design” you mean “dumpster where they got really really high and subsequently thought that tying a matching belt around a cloth bag constitutes a dress.” 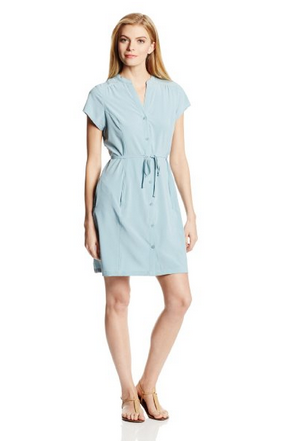 Conveniently doubles as a hospital gown. 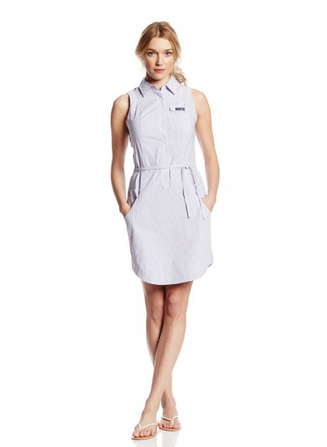 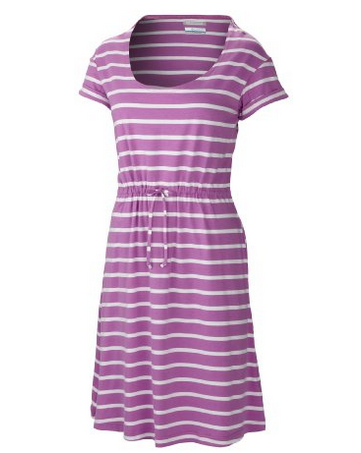 I love how murderous this model looks. Like, she can’t believe she’s fallen so low. 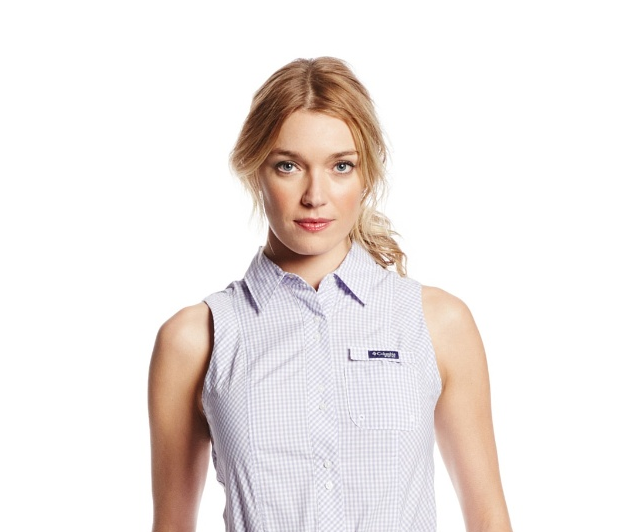 Next stop: Rock bottom. And after that, the Newport News clothing catalog.

And this one is just incredulous: 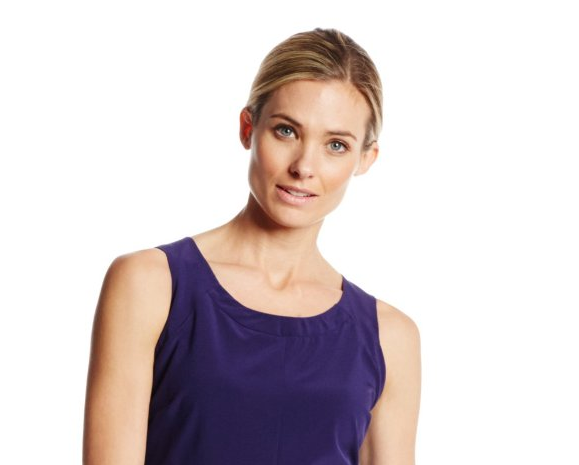 Still, I think the folks at Ex-Officio take the cake, because they managed to design a dress that looks like you’re a bridesmaid at a mass cult wedding. 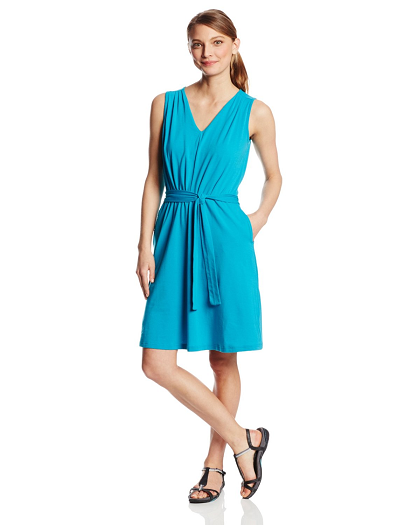 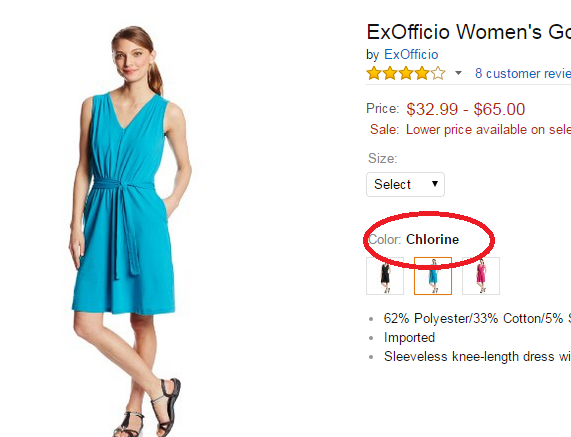 Also Doubles As a Prison Uniform!

I had to screencap the name of this shirt, because I figured there was no way you’d believe me otherwise: 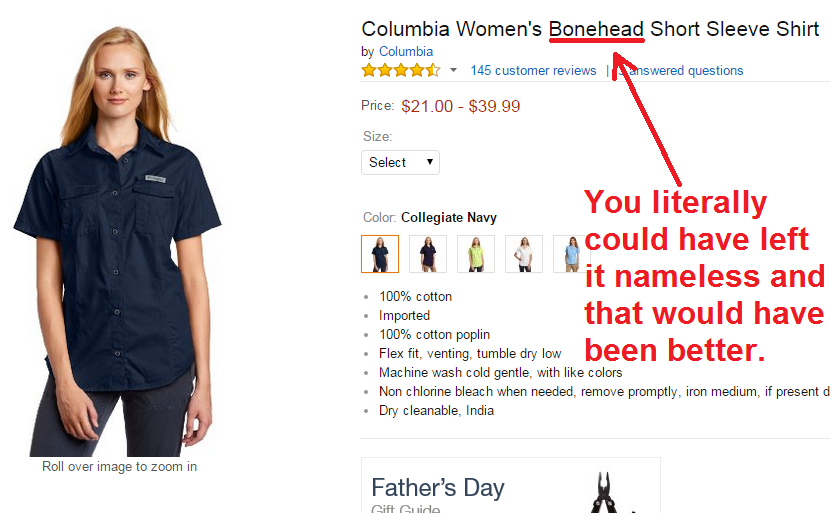 I almost hyperventilated with joy when I saw this. IT IS CALLED THE BONEHEAD SHIRT. It’s like a gift from the gods of consumer idiocy.

I can’t argue with the appeal, though: 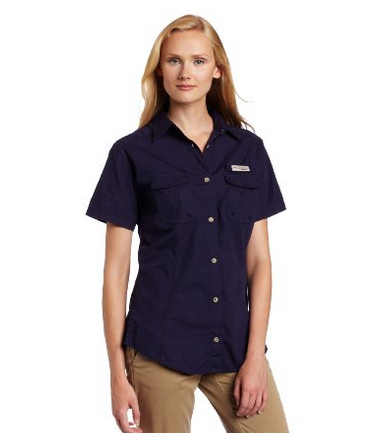 Sometimes you really want to cosplay as a FedEx employee. I get that.

Women’s Clothes That Are Inexplicably Infantile

“I’ve completed the design for the dress and-” 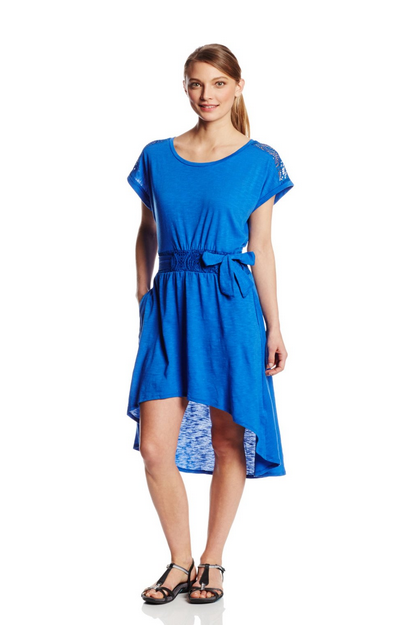 Originally Designed for Zack Morris, It Can Now Be Yours!

This is called the “Flashback windbreaker” which only further supports my suspicion that the people working at Columbia Sportswear are fucking with me. 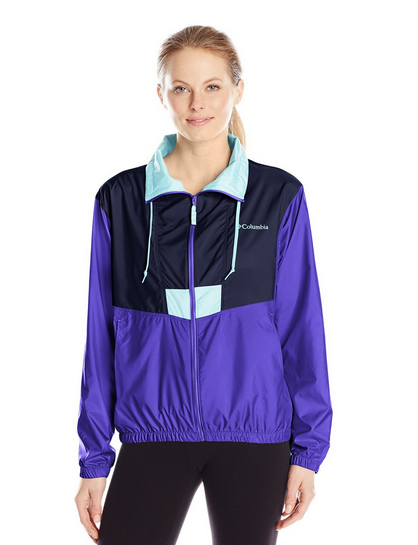 It’s made from 100% polyester, and features an elasticized waist, for those of you who want to want to reenact scenes from Saved By The Bell as you stroll through the Vatican.

TOTAL DIGRESSION: In looking for pictures of Zack Morris (because I graduated college with honors and now this is my life), I found a TUMBLR DEDICATED TO ALL OF HIS SHIRTS.

(We now return you to your regularly scheduled rant.)

Shirts That Are So Ugly, I Begin To Question My Own Grasp on Reality

This shirt falls into that miraculous section of the color spectrum that makes everyone – regardless of complexion – look like they are suffering from an acute case of jaundice. 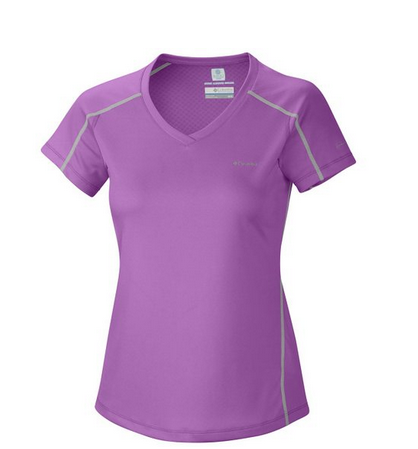 To its credit, it is hard to find a top that so effortlessly transitions from the garage to the miniature golf course.

Convertible Pants (A.k.a., The Least Sexy Article of Clothing Ever Created) 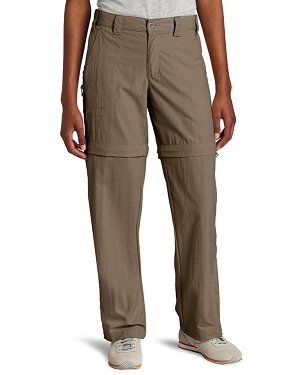 An excerpt from my soon-to-be-self-published adult novel, Unzipped Passion:

The Contessa looked back at Sebastian, as he tried to keep up with her pace over the rocks. His skin glistened, stains of sweat leaving Rorschach-like prints on his oversized plaid shirt (“From the Rick Steve’s Nylon Collection,” she’d whispered seductively in his ear when she’d given it to him, along with the pants he now wore). His busy life as a pediatric heart surgeon and three-time Olympic gold medalist skier left him unaccustomed to the heat, and he was soon near fainting.

“Lie down!” the Contessa demanded, when she saw him starting to swoon. He dutifully obeyed her. Men always did.

With a firm hand pressed against his sculpted chest, she deftly zipped off one of his pant legs, then the other. Sebastian opened his mouth to protest, but when he felt the rush of air on his toned legs, he could only moan in pleasure.

“How did you …?” he started to whisper, but could barely finish.

“Convertible pants,” she said, gently mopping the sweat from his brow with a detached pant leg.

Sebastian let out a deep and throaty laugh.

“Are you always so full of surprises?” he asked, staring at her with his deep green-gray eyes.

She smiled and knelt closer, her lips barely brushing his ear as she whispered into it.

“REI was having a sale,” she said.

Inside his Keens, Sebastian felt his toes curl.

Shorts That I Assume are From The Bob Hope Collection

Amazon says that there are only 13 of these left in stock:

Which means you’d better hurry, or you’ll have to borrow your grandfather’s pair.

And for those of you who want something a little more conservative, for the office: 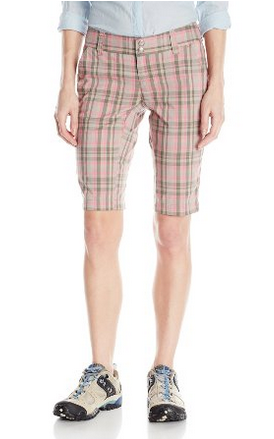 Night of the Living Skort

I thought this trend died in middle school, but someone decided to resurrect it from the bowels of hell. 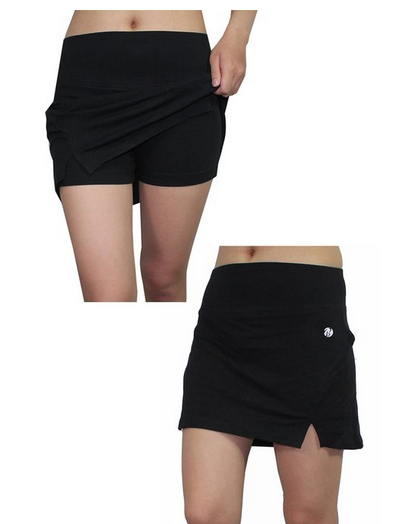 Which is fortunate for those members of the population who want the constriction of wearing both shorts and a skirt, while simultaneously leaving the locals wondering if you just flashed them.

Pants With a Rise That Is So High, It Threatens the Fabric of Spacetime

For people who don’t want to have sex on vacation. Or ever again. Because just undoing the zipper will take an ETERNITY. 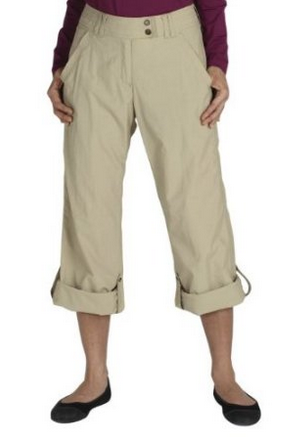 Made of 100% nylon, because who cares what your genitals smell like!

Clothing That is Inexplicably Bright and Fuzzy

Somehow, someone got the impression that people who travel want to do so while clad in a neon pelts, similar to what our nomadic ancestors wore when they went to raves. 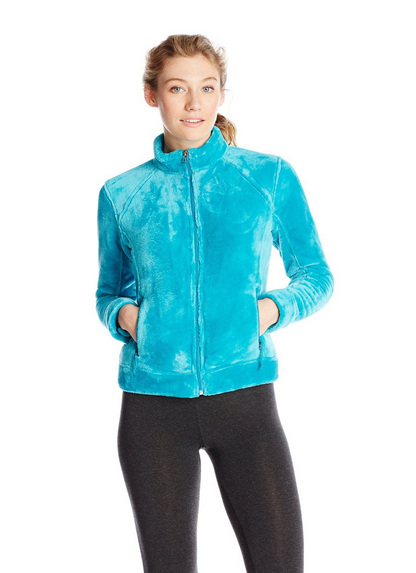 Warning: If you buy this, be prepared to have red paint thrown on you. People don’t take kindly to those wearing Muppet fur.

If you need me, I’ll be washing my underwear in the sink.