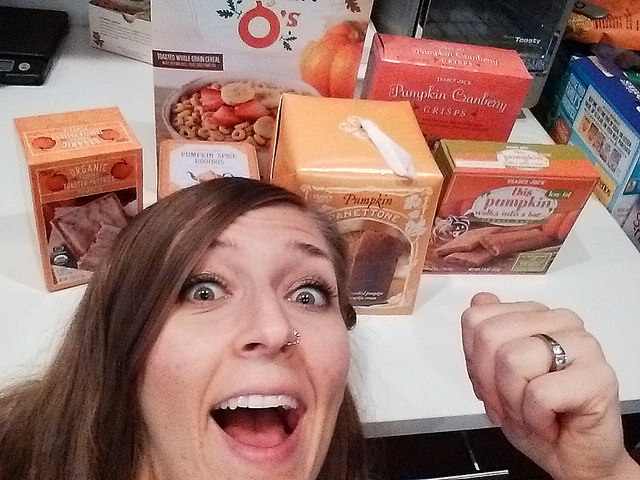 As a lifelong pumpkin aficionado, I have a special place in my heart for the baccanalian gourd-fuckfest that is fall. From the end of September until Thanksgiving, I ingest so many orange-hued treats that my farts smell of cinnamon and nutmeg (“They do not.” – my husband, pumpkin hater and fart snob).  I remain, for the most part, a purist: spare me your butternut and acorn squashes. I will not be swayed by the downright seductively named delicata. I want only the original, though I will take it in whatever processed form it comes to me: mashed and baked into cookies and pastries, dehydrated and added to a bevy of beverages, reduced to an essence and dripped into my eyeballs (“That … that last thing is not a thing.” – once again, my hubby.)

Yet even with my proclivities I accept that there is a limit to how many things we can imbue with pumpkin. But that has not stopped the brilliant, twisted, and in all probability stoned people on the Trader Joe’s Food Development Team from including it in every conceivable product on their shelves. They are playing god. It’s like Island of Doctor Moreau, except with more pumpkins and slightly less swine people.

Naturally, my only recourse was to try every single abomination they’d created, in the name of science (“Please don’t drag science into this.” – my husband again). I initially wanted to buy every pumpkin-flavored product they offered, but this soon proved fiscally unreasonable. In order to not lose my “going to the grocery store unsupervised” privileges, I realized I needed to come up parameters on what I was going to buy in order to limit my spending.

In the end, I went with shelf-stable stuff, since I didn’t want to uncover some dried out pumpkin dessert at the back of my freezer come April, which I would then inevitably eat. And it also meant that I could put uneaten snacks in our emergency earthquake kit, because what fun is an apocalypse if you can’t taunt your beloved? 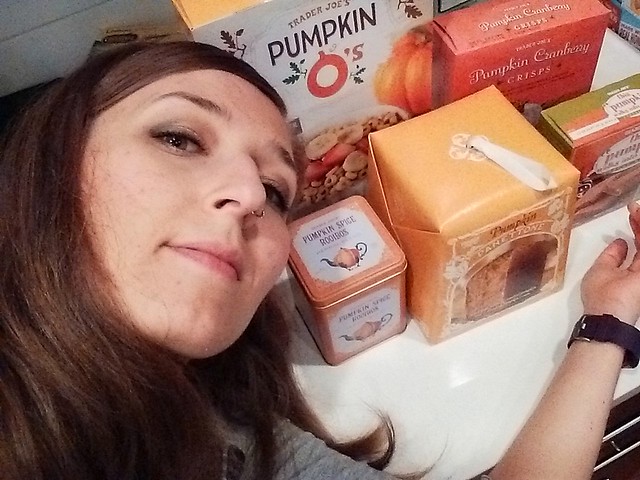 I texted this to Rand with the caption, “I am trying to seduce you with pumpkin.” It did not work.

Some of you might argue that these aren’t so much parameters as me just buying a bunch of random pumpkin flavored stuff at the store, and that my lack of thoroughness compromises the integrity of my fake experiment. Fair point. This might all be a thinly veiled excuse to eat junk food while taking selfies. If this bothers you, I suggest you find a site that follows rigorous scientific standards when it comes to its fake pumpkin-eating experiments. 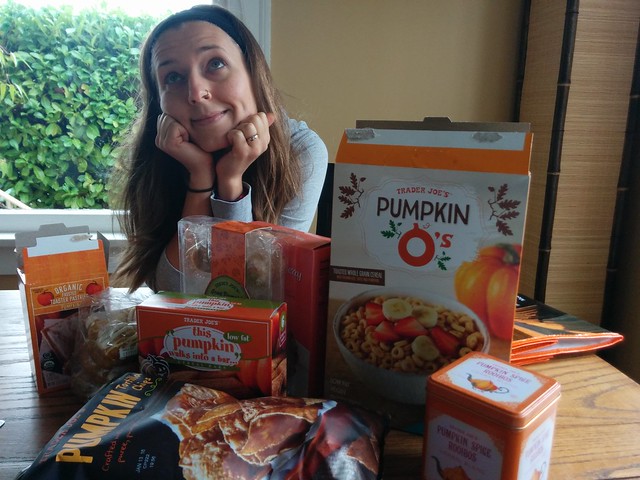 Me, before I knew enough to be afraid.

EXCEPT THERE AREN’T ANY. I’m the pinnacle of pumpkin science, you guys. I’m basically the Stephen Hawking of cinnamon and nutmeg (“Wow. That’s actually profoundly offensive.” – you-know-who again. I’m just going to stop quoting him, because he’s sort of a buzzkill).

Or at least, I thought I was until I realized that both Grantland and Serious Eats already tried to do this. I maintain that great minds think alike, as do slightly less-great minds whose faculties have slowly been eroded by the caustic properties of pumpkin.

Where was I? Oh, yeah. Pumpkin.

Since I didn’t actually want to subject my husband to the taste-test (or maybe because he adamantly refused and then locked himself in the bedroom. Whatever.) I decided to force my writers group to do it. Though to be fair, they aren’t so much a writers group as they are three women who sit around with me, eating cake while complaining about assholes. Together we’re changing the world.

Pam suggested that we start at sweet and end at savory, and her naivete made me want to hold her in my arms and rock her gently while I whispered this sad revelation: There is no savory. There is only sickening sweetness. There is no escape, no manner of salt that can free you from this sugar-coated hell. 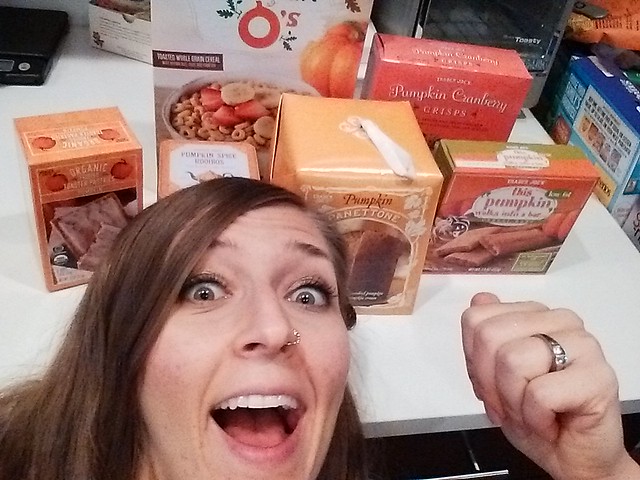 On to the taste test. 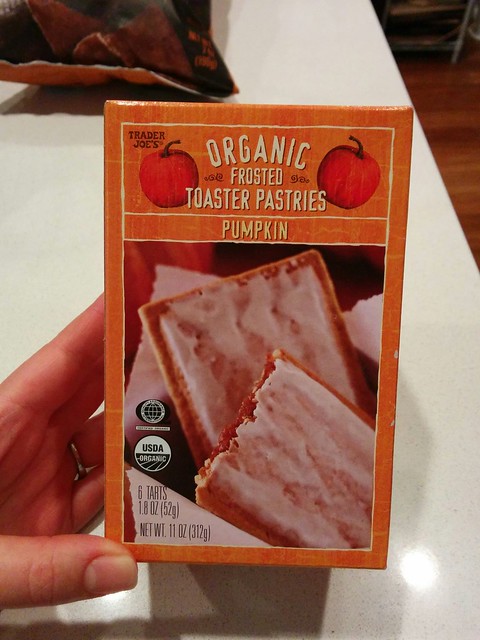 Pop-Tarts, while barely constituting food, are universally delicious, so making a bad one is like finding an openly gay Republican – so rare that it becomes a noteworthy achievement. For this, I suppose, the good folks at Trader Joe’s should take a measure of pride. They purport to be organic, but then again so is gravel. Flavorwise, they narrowly beat out the box they were packaged in, but only because they were frosted. 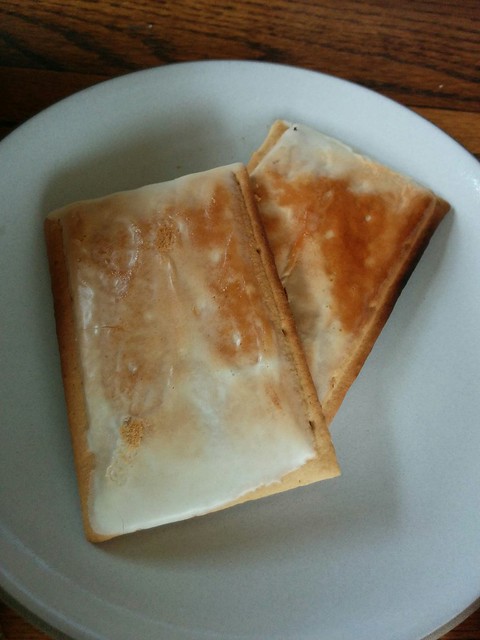 Also, we burned them.

Suggested Tagline: “Are these suppose to taste like this?” 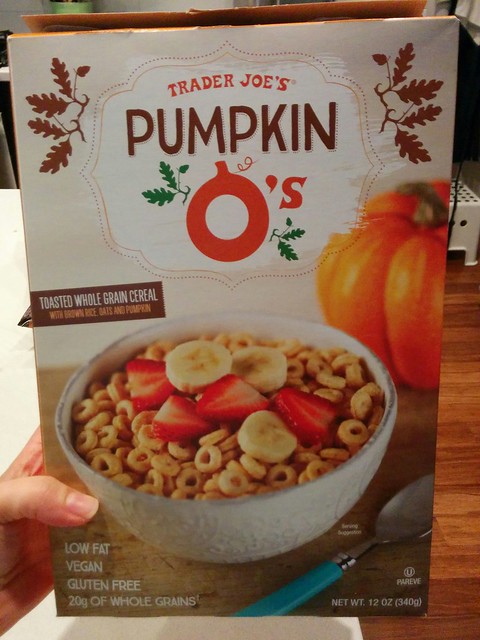 Remember Apple Jacks? How they were so brittle, they broke into shrapnel-like pieces upon contact with your teeth, and still managed to seem vaguely stale? And they tasted nothing like apples, which at some point the company tried to turn into a selling point because honestly, what else was there? Trader Joe’s O’s are limply hanging from that same withered branch of the breakfast family tree.

The flavor is vaguely evocative of cinnamon (“There’s … there’s a little bit of a thing. There’s the suggestion of pumpkin.”) but this merely served to highlight everything that was absent in both this “food” and my life. Eat these, and you will find yourself sinking into hole of depression and chemically-synthesized flavoring. While I contemplated the futility of my existence, Naomi dispensed this wisdom: “It tastes like preschoolers peed on a pumpkin pie.” I did not ask her to elaborate on how she knew this, because some things should remain a mystery.

Suggested Tagline: “You probably bought these while hungover.”

Trader Joe’s “This Pumpkin Walks Into a Bar” Cereal Bars 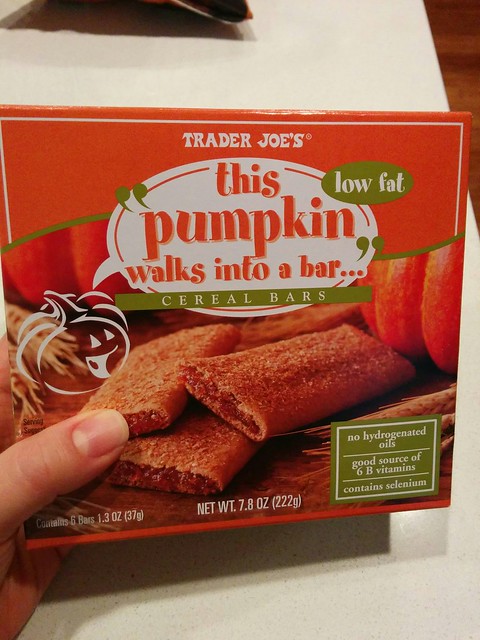 I initially found the punny name of this snack to be rather charming. Now I want to slap the self-congratulatory moron who came up with it.

These looked like a long, squishy Fig Newton, and when you find yourself wistfully thinking of how much better THE WORST COOKIE EVER MADE is by comparison, it might be time to reevaluate your life. 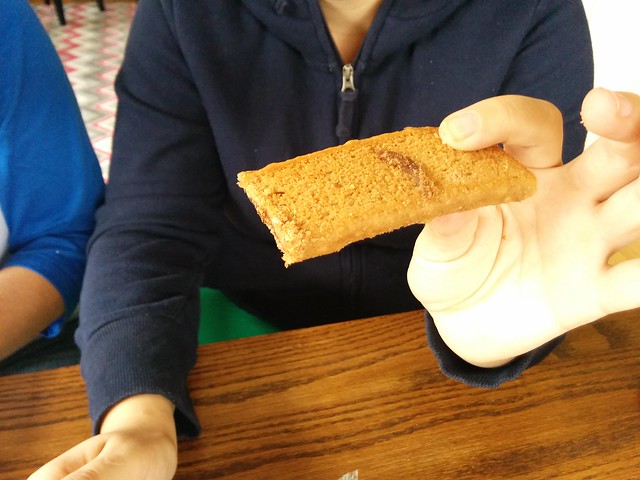 Pumpkin is listed rather low on the ingredient list, and a more accurate description of the flavor would be “Frozen apple pie that was heated over a pumpkin spice candle.” Just like grandma used to make when she was drunk.

“It’s got an excellent sawdust texture,” Pam noted, while Naomi and I agreed that it tasted the most like potpourri of any of the treats we encountered. 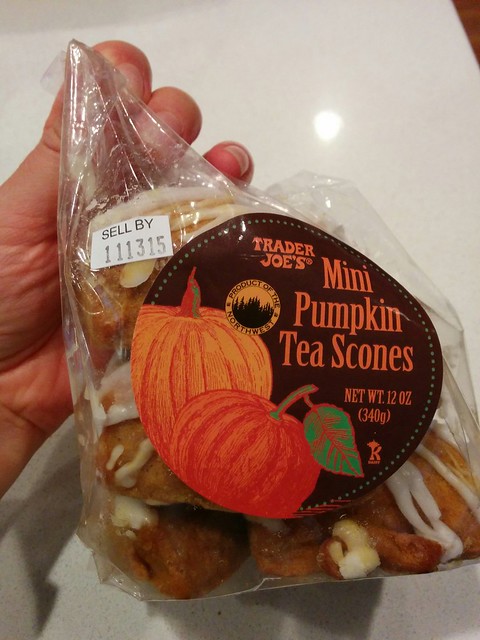 “I’m hopeful about these.”

“Are you crazy? Scones are always terrible.”

The package says that the “best buy” date for these is November 13th, which suggests that these can actually decline in flavor and they are not presently at theoretical zero. I’m tempted to hang onto them until Friday to see if they actually get worse, but that feels like the Epicurean equivalent of slowing down to gawk at a car accident. Later, in an act of which I am not proud, I would systematically pick the frosting off of these and eat it. It was the best thing I had that morning. 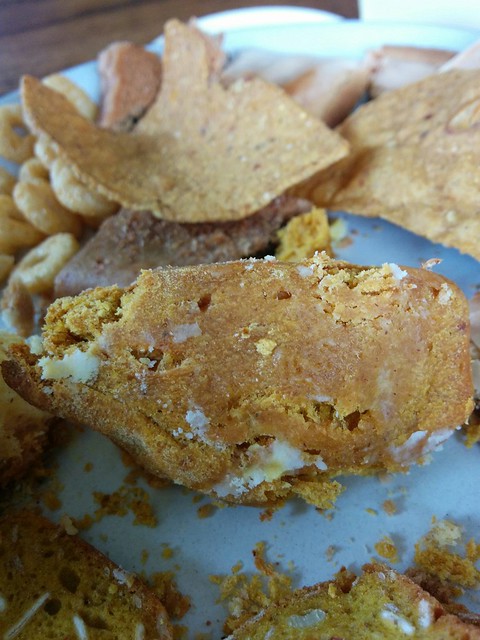 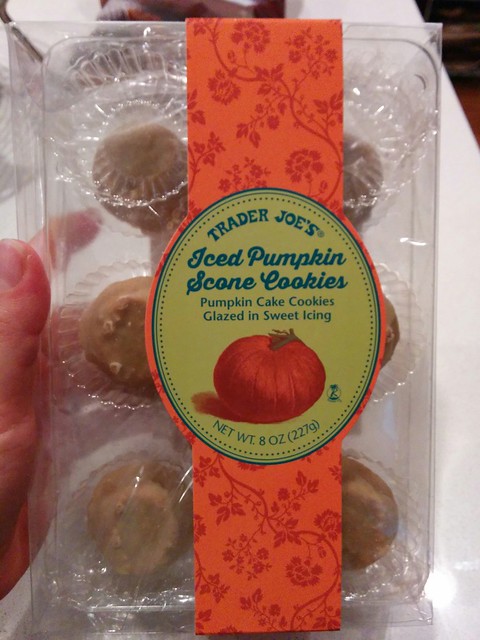 We all thought that these were pretty good, but it might have been that everything else that preceded it was so bad that our tastebuds now had Stockholm Syndrome. Like when you spend enough time shopping at Ross and all the pants have “LUSCIOUS” written across the butt or are marked “IRREGULAR” with alarmingly few elaborating details, so that by the time you encounter a Lycra bodysuit that’s two sizes too small, you think you’ve hit the jackpot. 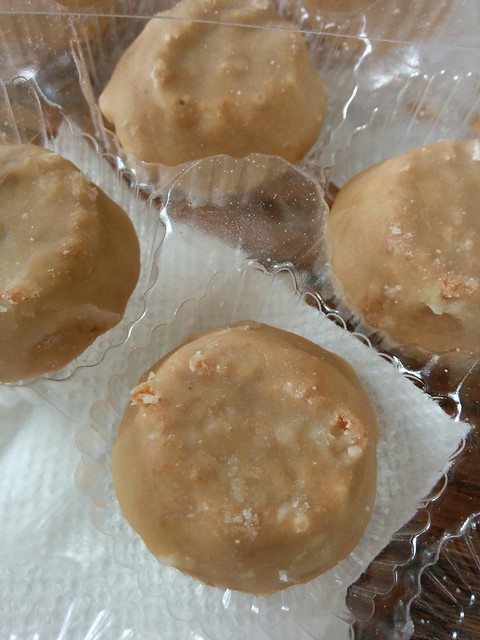 “I’m less offended by these than anything else we’ve tried.”

Suggested Tagline: “You will regret this later.” 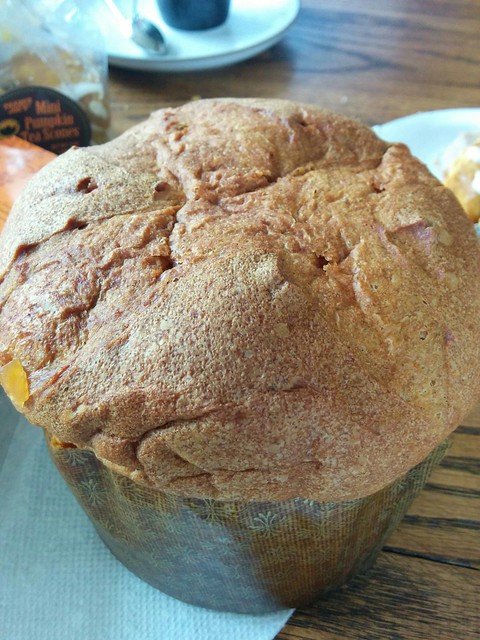 Perhaps the problem here is that we start off with something rather mediocre to begin with – Italian panetonne, which serves no purpose other than to fool you into thinking someone brought cake when really they JUST BROUGHT BREAD. The packaging said it was “filled with pumpkin cream and candied pumpkin pieces,” which sounds marginally better than the more accurate “filled with IT DOESN’T MATTER DON’T EAT THIS.”

I described the candied pumpkin bits – which bore a shocking resemblance to a cut up, scented candle – as “vaguely cartilagey”. Naomi equated the pumpkin filling to glue. Pam had withdrawn into a corner by this point and was gently rocking back and forth and talking to herself. 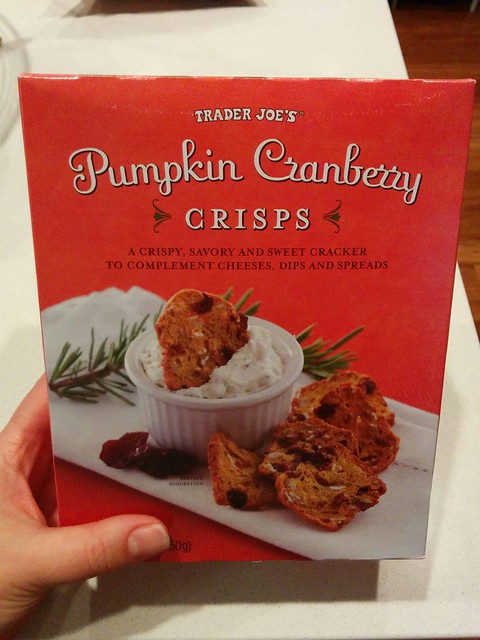 These were … shockingly inoffensive. Like that uncle who’s usually super racist but is presently too drunk to say anything bad about the Ukrainians (at the moment).

I wouldn’t go out of my way to get them, but if they were served to me at a party, I wouldn’t instantly assume that the host: 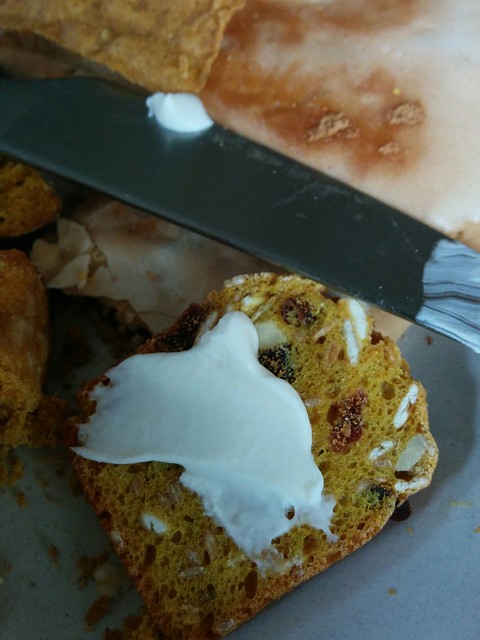 We tried them with some creme fraiche that was insulted by the pairing.

Suggested Tagline: “The perfect cracker for people who sort of care about things.” 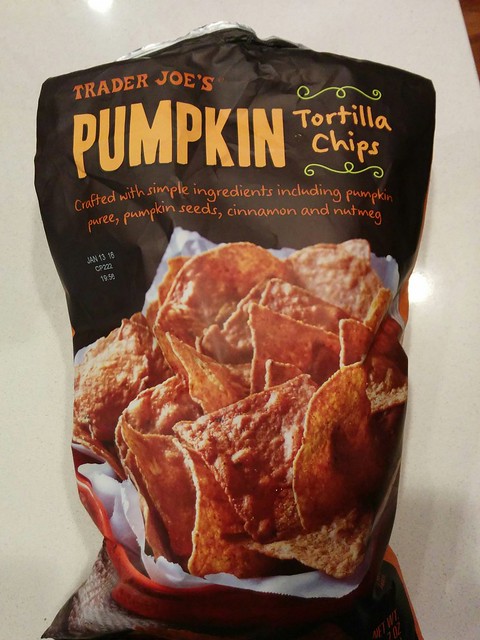 These didn’t really taste like pumpkin, unless by “pumpkin” you mean “burned”. Pam said they tasted like nothing, but after the snack atrocities that preceded it, you begin to long for nothing. Fall at Trader Joe’s makes Nihilists of us all.

Suggested Tagline: “Your existence is meaningless. (Great with our Avocado’s Number Guacamole!)” 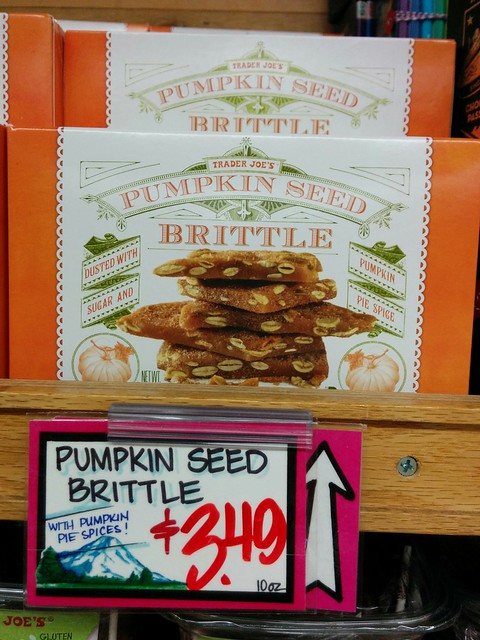 I didn’t buy this brittle for this taste test, because I purchased it last year and I still occasionally wake up in a cold sweat from the memories. Its distinguishing factor is that it’s been covered in pumpkin pie spices which recreates, with surprising verisimilitude, the sensation you’d get from dropping regular peanut brittle in sand and rolling it around. But I guess it’s nice that someone else has done the work for you.

Suggested Tagline: “There’s nothing wrong with the box you picked up. It’s supposed to look like that.” 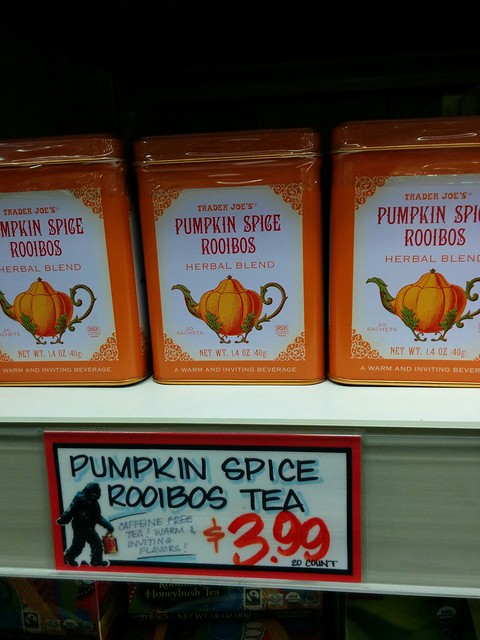 The inspiration for this product:

Step 3: Realize, far too late to rectify the situation, that it is early November. Also, that jack-o-lanterns aren’t food.

Step 5: Now nauseated by the mere suggestion of food, make yourself a cup of tea. Swear it tastes pumpkiny, even though it actually doesn’t. It’s just that the pumpkin is now inside YOUR SOUL.

Suggested Tagline: “The pumpkin is calling FROM INSIDE THE HOUSE.”

(Photo unavailable because I didn’t want you to see the teeth marks on the bag after I’d gnawed on it.)

The concept of this is circular enough to rip a hole in the space-time continuum. That being said, they’re delicious. I purchased a bag long before the taste test but I’d already finished it, shoveling pumpkin spiced crunchiness into my mouth with a glassy-eyed frenzy. I went back to the store to get more, but like most products that are actually enjoyable, the Trader Joe’s by my house stopped carrying it

Suggested Tagline: “At this point, you might just be drunk.”

The verdict: consider hibernating until after Christmas. Even if you like pumpkin.

P.S. – I know that this all seems profoundly wasteful, so in order to avoid being a total asshole, I sent the rest of these treats to Rand’s office, where they will provide sustenance to hungry developers, and also made a donation to our local foodbank.

Food, Life at Home, Nothing to Do With Travel, Taste test, Trader Joe's