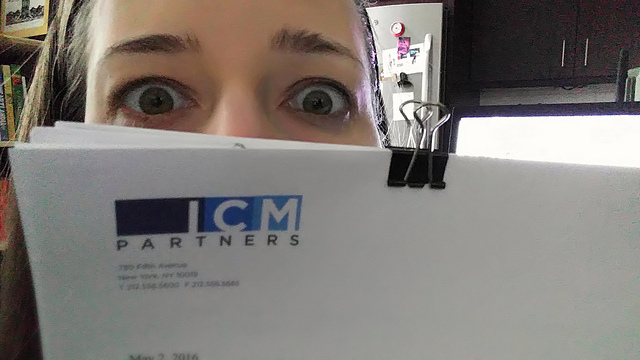 The first is that I signed my contract for my book deal. Which means my book is actually getting published, and the last few months haven’t been some weird fever dream. (Though I suppose that this could all be part of the fever dream, too. At which point I’d just have to say, Kudos, fever dream. This is downright elaborate.) 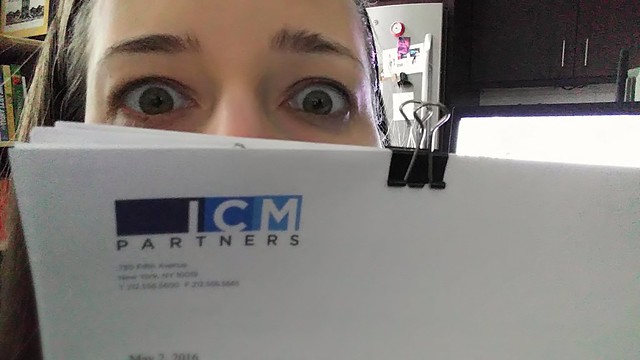 I was trying not to blink and so I just look googly eyed.

I was holding the pages in my hands (literary contracts, for the record, require a ton of paper) and told Rand, “This is weird. This is everything I’ve ever wanted.”

At which point he communicated to me with a lot of throat clearing that it wasn’t everything I’d ever wanted. Yes, love. You are right. But I’ve been thinking about this since I was 8, and I’ve only been thinking about you every day for the last fifteen and a half years.

Still, it’s very convenient to have so many wonderful things in one tidy spot. 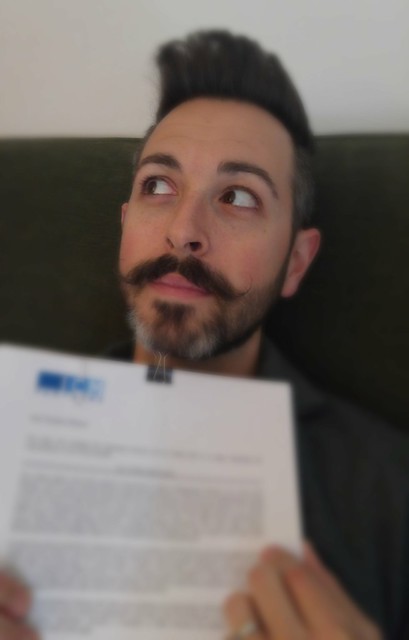 Rand posing with my book contract.

My contract is a lumbering beast. I don’t know what’s proprietary and what isn’t, so I’ve blurred most of it out. Rest assured, it is mostly legalese and very little juicy stuff, but I did find the description of my book to be hilarious. It’s so … technical sounding. 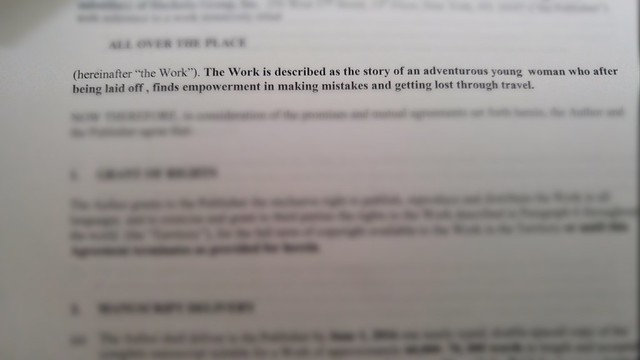 Adventurous young woman? Empowerment? THAT IS DOWNRIGHT INSPIRATIONAL. It’s much better than how I’d been parsing it: Potato-shaped woman searches for cake.

This cracked me up, too: 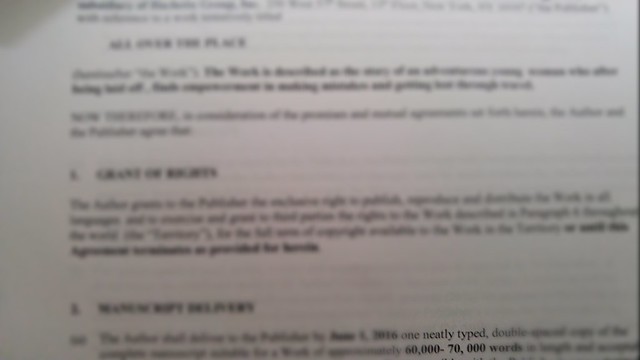 See at the bottom on the right? It actually stipulates that the book must be neatly typed. As though I might just sprinkle an assortment of scribbled notes around my publisher’s office while creepily whispering, “And she lived happily ever after.” It’s like they’re anticipating all the weird shit I might do.

Which is entirely fair. After all, scribbled notes is largely how my book was written. Behold: 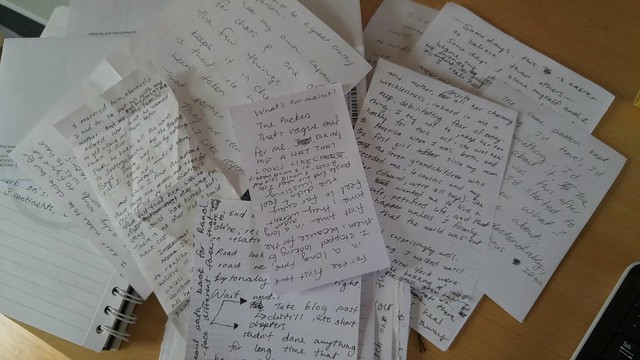 I wrote a memoir on the back of old receipts and those printouts you get from the pharmacist explaining how the prescription you’re on might kill you. For real.

Yesterday brought one more exciting development: my amazing editor Colleen and I finalized a subtitle for my memoir. This has required infinite patience on Colleen’s part, because while she is working on actually turning the above scribblings into a book, I am recounting to her elaborate fantasies that include pretty much the entire original cast of Hamilton.

Her responses are usually very professional and obliging as she tries to steer me on track.

Her: … Uh-huh. That’s great. I didn’t realize that Lin Manuel Miranda was that flexible, morally or otherwise. Now, can we really need to talk about Chapter 15.

Her: There’s no text. It’s just an image of shirtless Jeff Goldblum from Jurassic Park.

Me: Best part of the book, really.

She is saint, is what I’m saying here.

Here are some of the subtitles that Colleen and I talked about:

A passport, a brain tumor, and a twisted sense of vigilante justice.

Confessions of the Worst Traveler, Ever.

Here are some of the subtitles Colleen and I did *not* talk about.

The true story behind the making of the Broadway-hit musical Hamilton! (Cons: Blatant lie, definitely would incite a lawsuit. Pros: I bet it would sell really well before people caught on.)

Zero Sense of Direction, and Even Fewer Fucks Given.

Women Who Hate Rick Steves and The Men Who Love Them

A Farewell to Pants

Do You Know How Many People Had to Be Drunk on The Job for This to Happen? A LOT.

The Spiritual Successor to Eat, Pray, Love (but with zero praying and a lot more eating and most of the love is for food. Also, I never actually read Eat, Pray, Love but it was like, super-duper successful, you know?)

A Guide of How to Get Revenge on People Who’ve Screwed You Over, Mostly by Peeing on Their Stuff

Comes With A Free Cupcake!* *cupcake not included

And a title/subtitle combo which I think would make for a great sequel:

DIY Toe-Hair Removal: How My Google Search History Accidentally Became The Title of My Book

Picking a title and subtitle, as it turns out, are a lot of work. Yesterday I told Rand the one we’d settled on and he laughed. I considered that a good sign. I’d love to share it all with you, but I’m holding off until the designer comes back to us with a mock-up for the book cover.

That’s right: my book is going to have a cover, too (this is all crazypants, right?). I have some ideas for what I want it to look like – here’s one that I floated to Colleen: 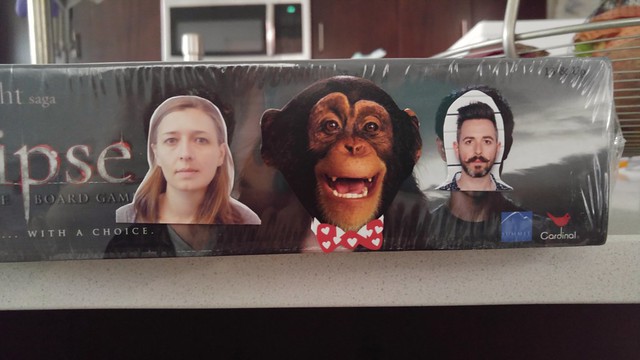 These are like, the worst photos of us possible. Rand was literally taking a faux-mugshot at a conference and I’d just landed in Cambodia after 20+ hours of flying. The chimp looks good, though.

I took the copy of Twilight: The Board Game that my mother inexplicably got my brother and me for Christmas one year and have been slowly improving it. Admit it: if you saw a book with this cover, you’d totally buy it, right? This is the best love triangle, ever. And still a better love story than Twilight.

I haven’t heard back from Colleen yet. I hope she likes it.

She’s so patient. She really is a saint.