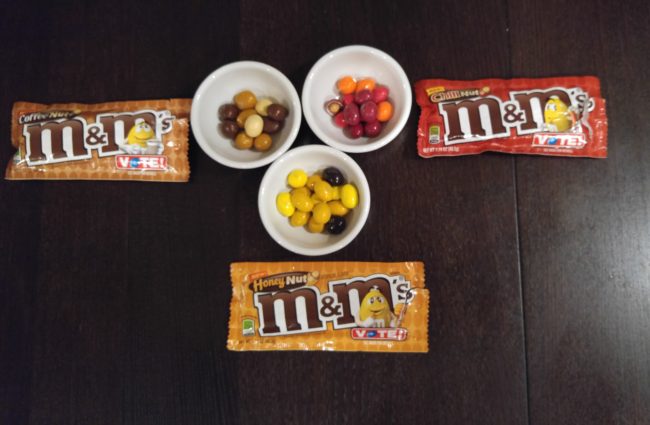 Posted in: "Lifestyle", Food, Life at Home, Nothing to Do With Travel

Note: This post is obviously unsponsored, because no one from M&M’s would pay me to say the things that I said. 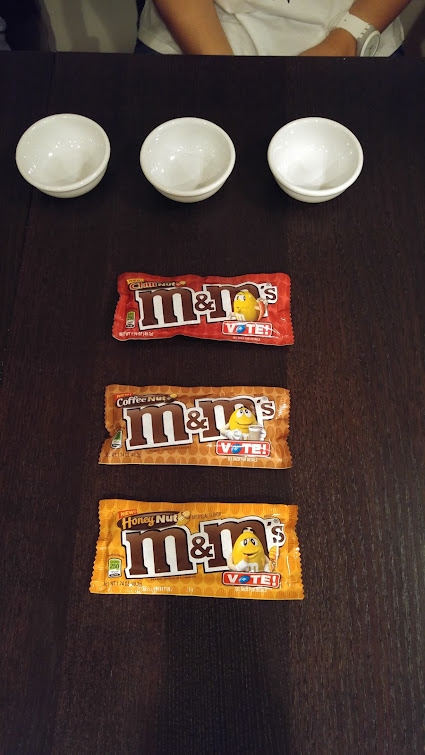 One of the great things about having friends (besides being the antidote for the crushing loneliness that encapsulated your late teens) is that you can make them eat things in the name of science. And when they complain you can just nod sympathetically and mention that Marie Curie died from radiation exposure, so maybe they can eat a couple of chemically-flavored candies (which are probably less likely to cause aplastic anemia) without whining.

Besides, this is for the sake of research, you explain. Because you went to the drugstore and found that M&Ms just released a bunch of new “concept flavors” which were probably developed by a group of stoned teenagers sitting in their basement. And thank god, because without stoned teenagers, I don’t know what we’d snack on. Probably fruit or god knows what. So you bought a bunch of them, and the cashier bagged them with relatively little judgement, because she sees everything you buy from the drugstore. She knows all your secrets. She rings them up for you every week.

I bought three flavors of peanut M&Ms, which caused a bit of an existential snacking crisis: isn’t peanut already an M&M flavor? I needed to delve further into this mystery, and I couldn’t try them alone for obvious reasons: insulin shock, for one, and because as my love for the film Howard the Duck attests, you can’t trust the opinion of one person, especially if that one person is me.

This photo is kinda shitty, but so are the candies, so …

The  panel for this experiment consisted of my long-suffering husband, Rand, who you know from such hits as “Why is the Milk Pink?” and “Jesus Christ Baby, What Did You Do to the Bathroom?” Joining him were our friends Emily (who is a vegetarian, which means she cares about what she eats, which means that this is going to be a problem) and Ben (who kept saying insightful things about the candies in question, some of which I refused to record, because he was making me look bad as a writer. WORDS ARE MY THING, BEN. GET YOUR OWN THING.) 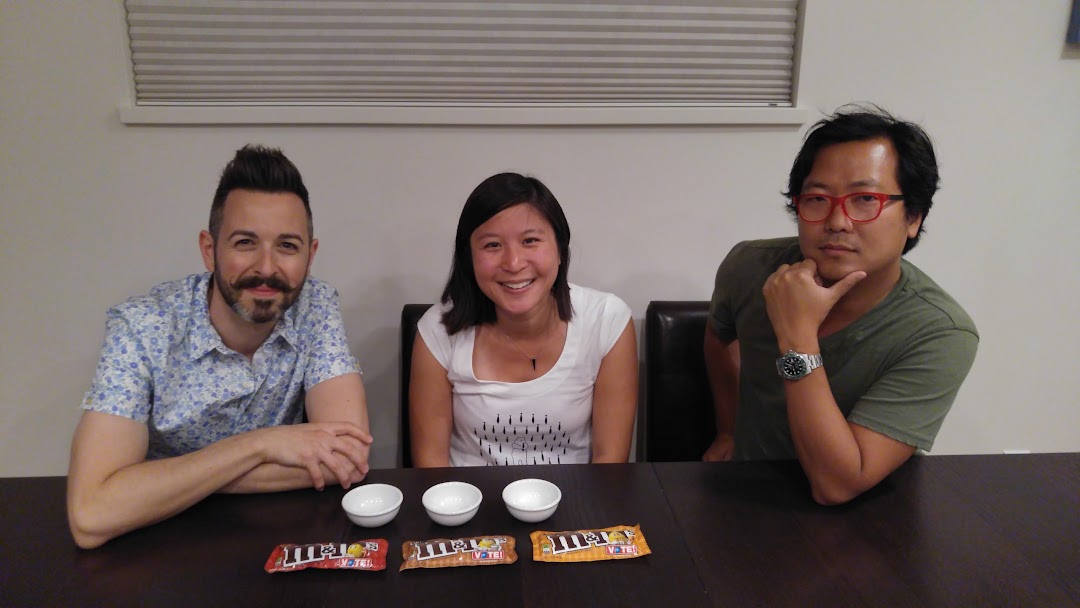 The M&M “flavors” were Chili Nut, Coffee Nut, and Honey Nut. They are all terrible. Let’s explore why in detail, shall we?

We began with coffee nut, though to be fair, it didn’t matter. The packaging itself seems to suggest that the people at M&M agree that this is all bullshit. Not even the giant cartoon candy on the bag seems to think this is a good idea. 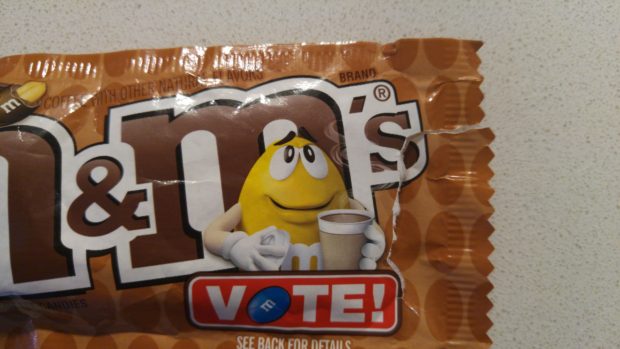 This is the face of an anthropomorphized candy that is about to have explosive diarrhea.

THEIR OWN MASCOT CANNOT GET BEHIND THESE SNACKS.

“It … it tastes a little like coffee,” Emily offered, charitably.

“I would not buy this. This is worse than a regular M&M.” – Rand

(Something about Neitzche and also how the M&M is as structurally unsound as our public education system.) – Ben

He was right. The candies were oddly crumbly. 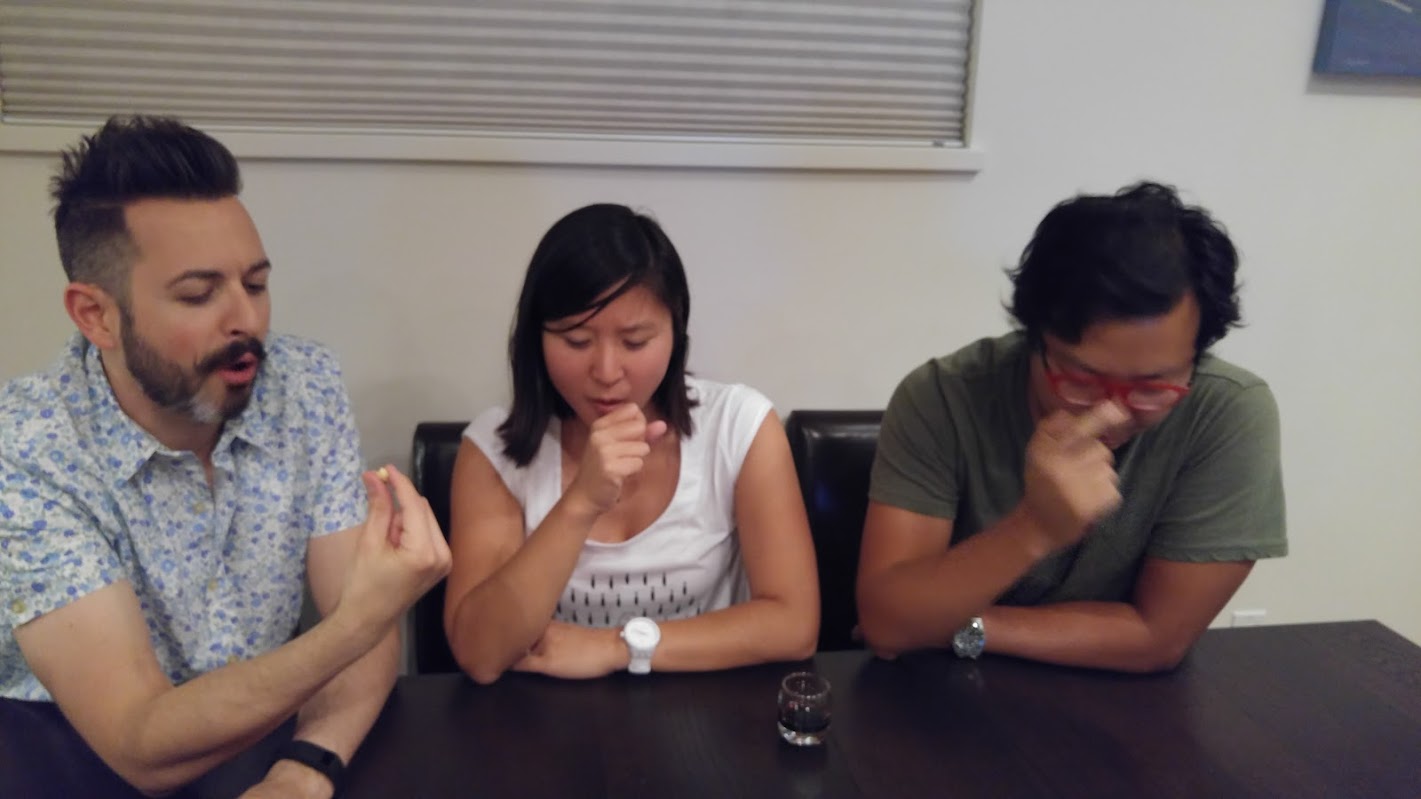 I think Rand might have actually spit this one out.

The package is rather confounding, as it claims to have “Coffee and other natural flavors” but the ingredient list on the back makes no mention of coffee, and the only flavor listed is “artificial.” It does taste mildly coffee-like, but more like you had a cup of the terrible, over-roasted sludge and then ate a pack of peanut M&Ms: the true breakfast of champions. This pack just eliminates the middle man, because god knows that drinking all that shitty coffee was cutting in to your “me-time.”

The one upside: the candies are various hues of brown, and one is the light tan that reminds me of the M&Ms of my childhood (this color was always my favorite, and was cruelly stripped from the pack when blue M&Ms were introduced). 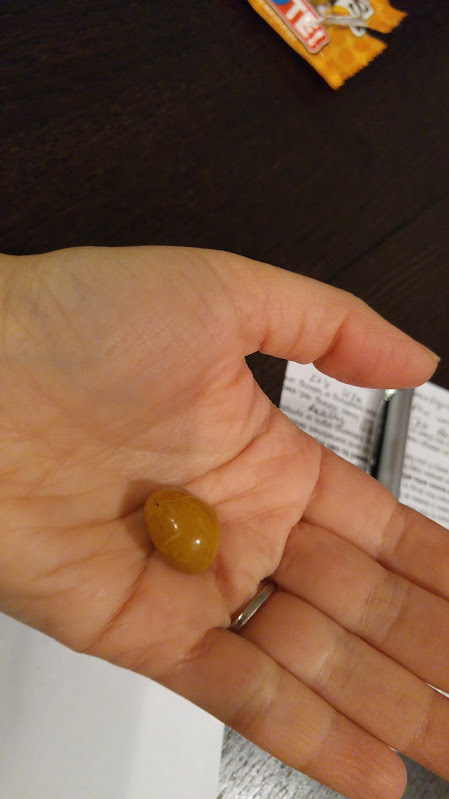 So if you are feeling particularly nostalgic about candy, you can buy a pack and … look at the tan ones, I guess. And then try to ignore the fact that you now have a headache and your mouth tastes like ash.

If you are wondering what a “Chili Nut” is, so is the rest of the world. These flavors make no sense. They are the Mad Libs of snacks- non-sensical combinations devised by someone who is tearing through their pantry with the subtlety of a half-starved raccoon.

Chili nut also notes on the package that the candy has been flavored with chili extract and natural flavors. Notice that once again, the M&M mascot looks unconvinced. 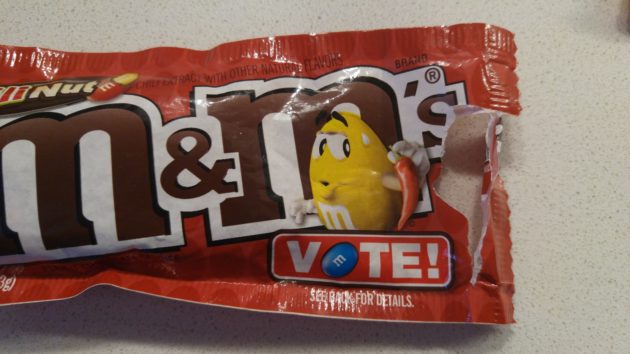 This does not give me confidence that the experience I’m about to have is going to be a pleasurable one.

“It’s like the background radiation of the universe. It’s there, but you have to look for it.” – Ben (I’m not even kidding. HE ACTUALLY SAID THIS. I almost kicked him out of my house.) 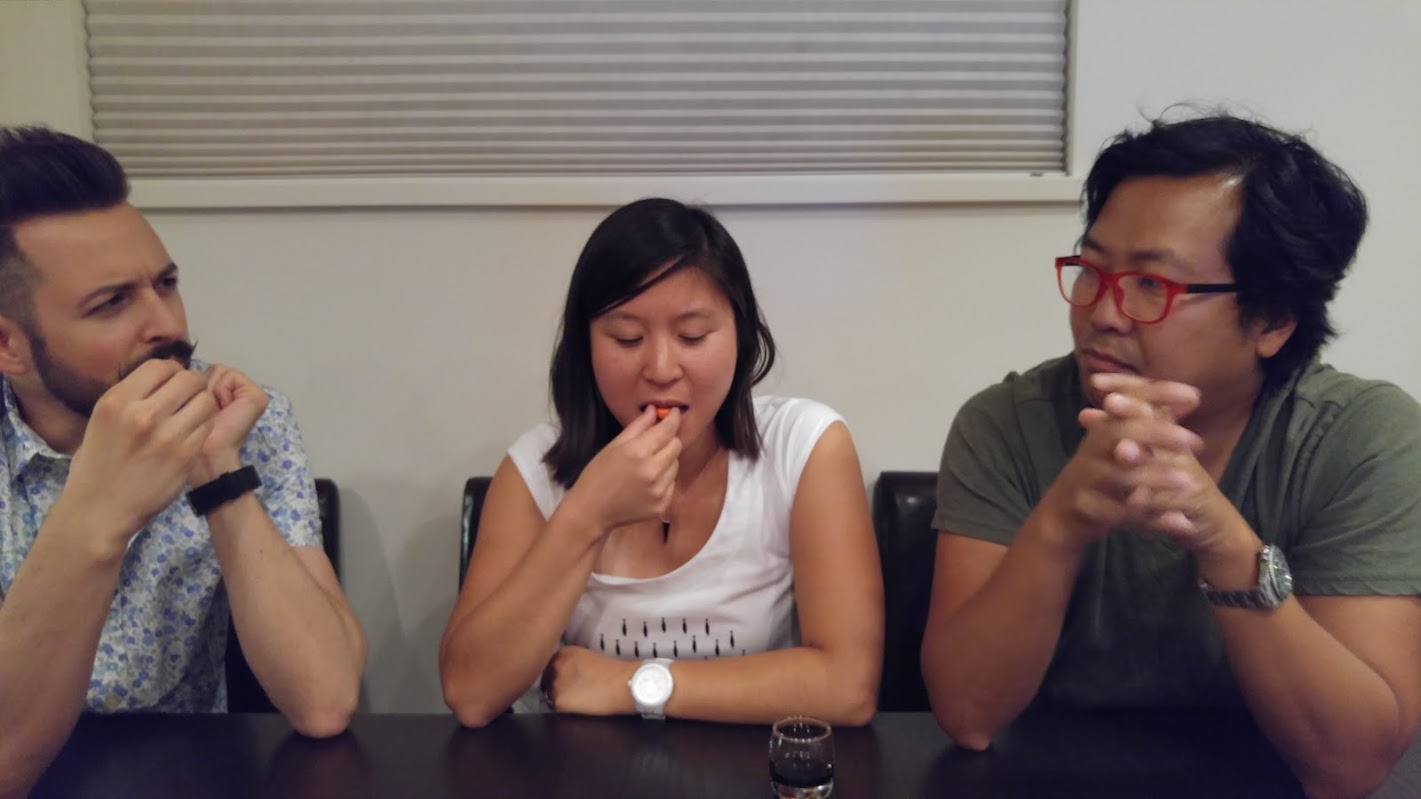 Notice everyone’s “WHY ARE WE DOING THIS?” expressions.

It was the only candy that had an ingredient list that reflected the flavor it was supposed to be – chili extract was actually listed on the back. Once again, though, we found the quality of the actual candies to be specious – most of them were cracked or broken (or weirdly dusty), as though they were rushed out of the manufacturing plant before the VP of product development had time to sober up. 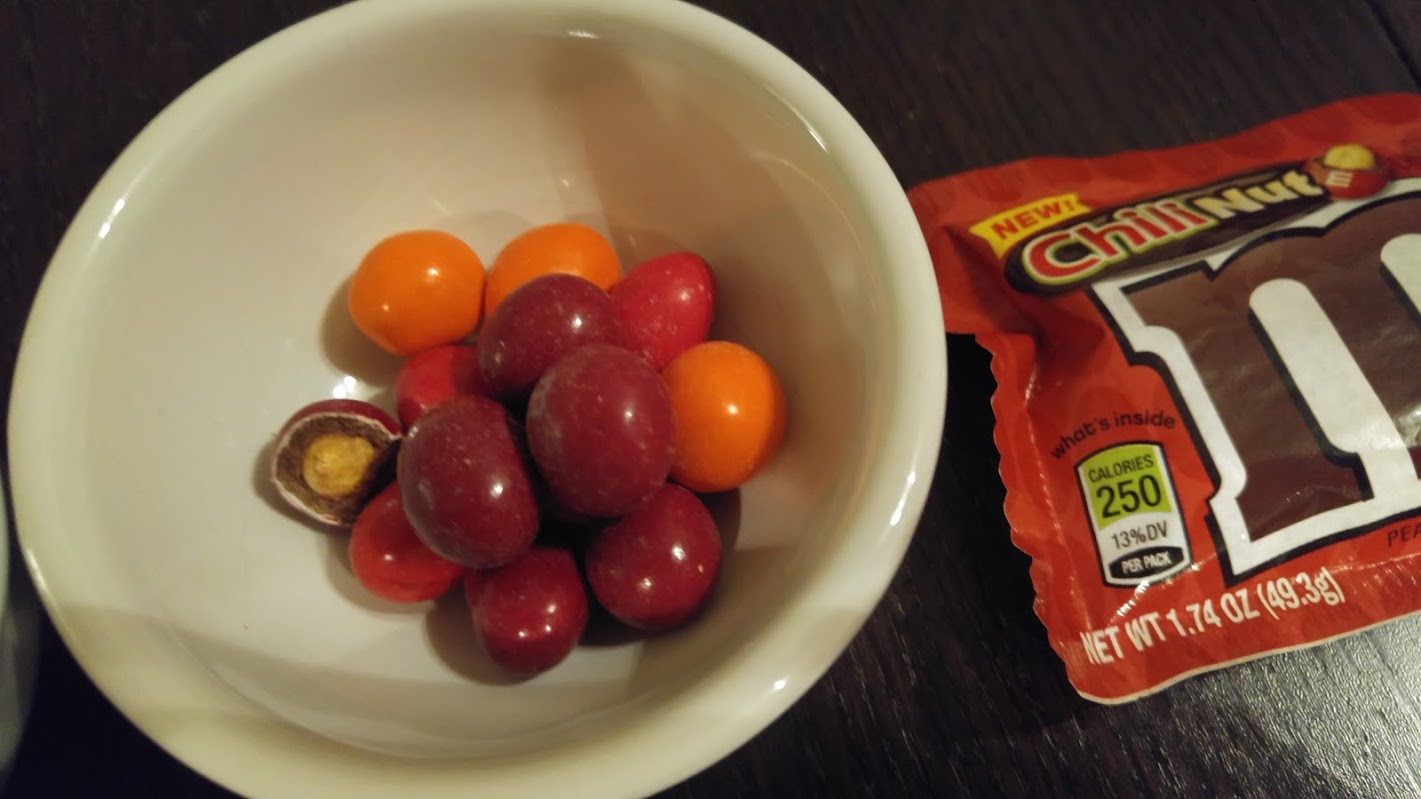 The spice turned out to be incredibly inconsistent from piece to piece, which would be an issue if someone were actually inclined to eat more than one. You will not be. 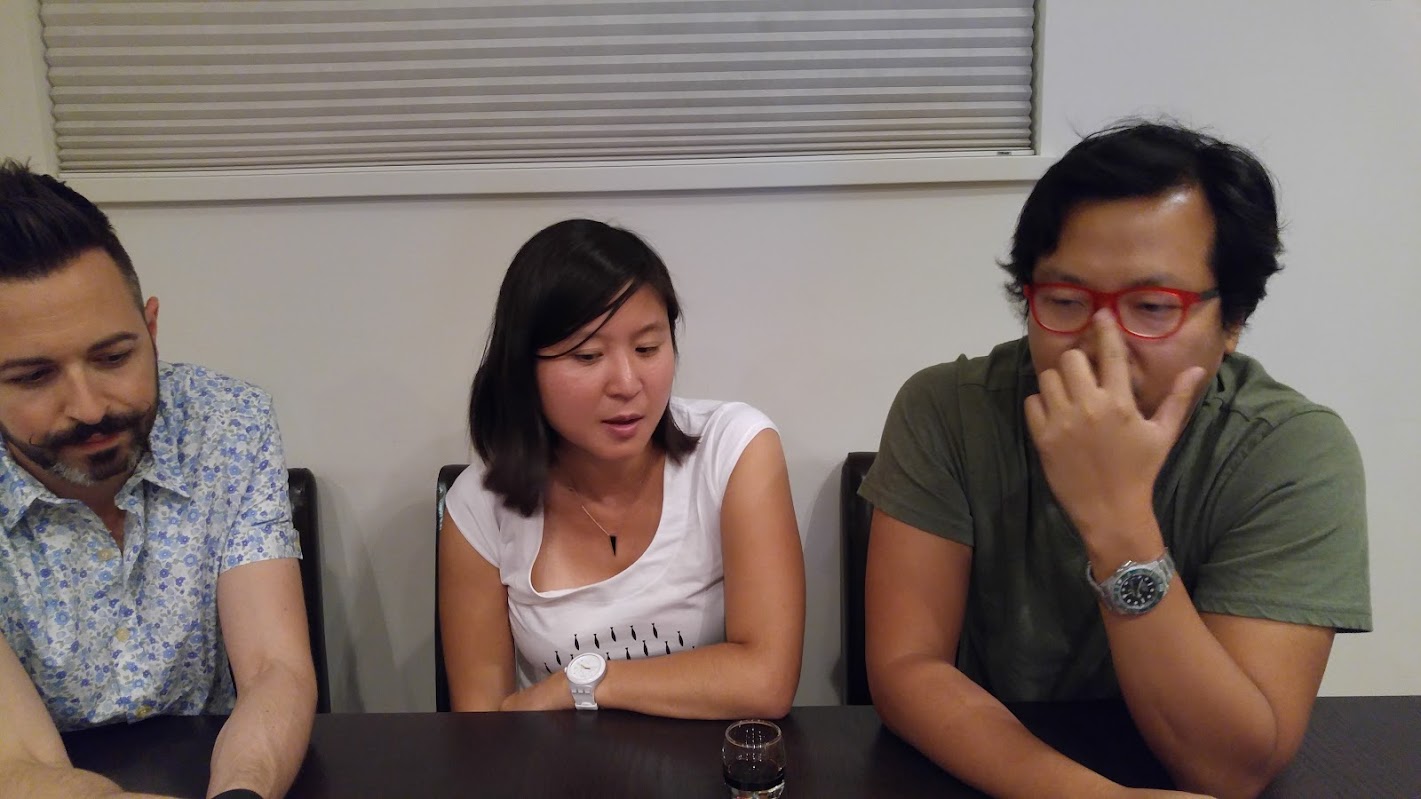 (Something about Jeb Bush’s presidential campaign. I shit you not.) – Ben

This candy doesn’t even try to pretend it’s food, a level of honesty which I found somewhat refreshing – it proclaims that it’s artificially flavored right on the package. They have a cloying, overly-saccharine flavor, which makes sense because candy doesn’t need the addition of honey. I guarantee you, no one in the history of time has ever eaten an M&M and thought, “This needs to be sweeter.” 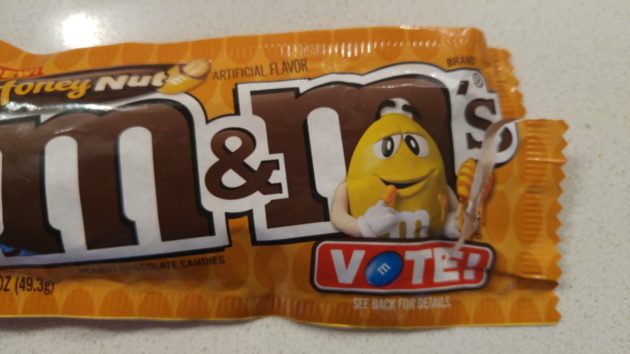 They even made the M&M on the package look stoned, because drugs are the only thing that could possibly make these palatable.

To add to the fun, they are of a color palette stolen from construction site warning signs. 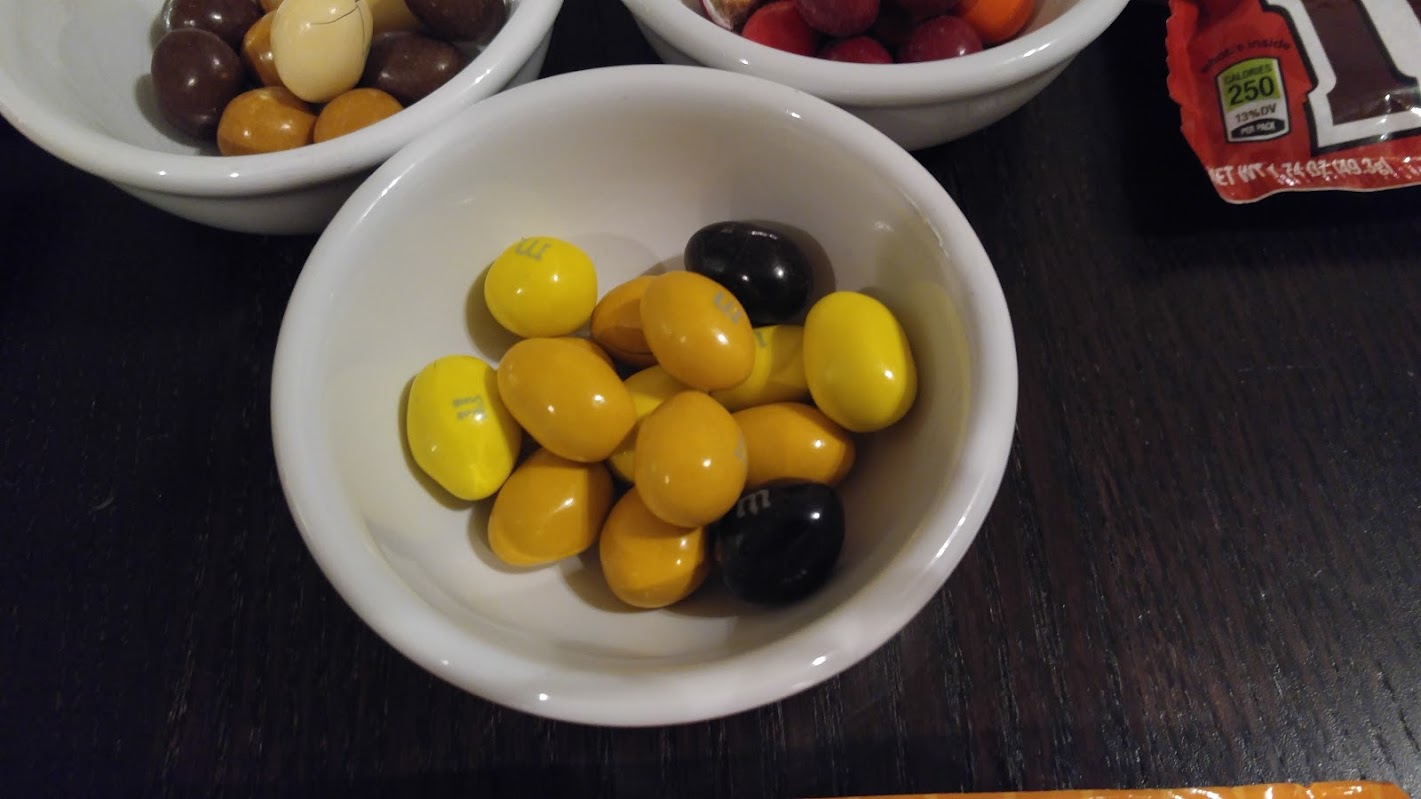 I honestly don’t even know why these exist.

These are all terrible. The packaging implores us to “vote”, but makes no mention of how or for what, so I’m just going to assume that these shitty candies are imploring me to do my civic duty this November. As though they are a creepy warning of what might happen if I don’t.

You guys, these candies are a warning. And they might just save the world.

P.S. – I’m not a total asshole. To make amends for forcing everyone to eat shitty candy, I make them thumbprint cookies, filled with less-shitty candy. 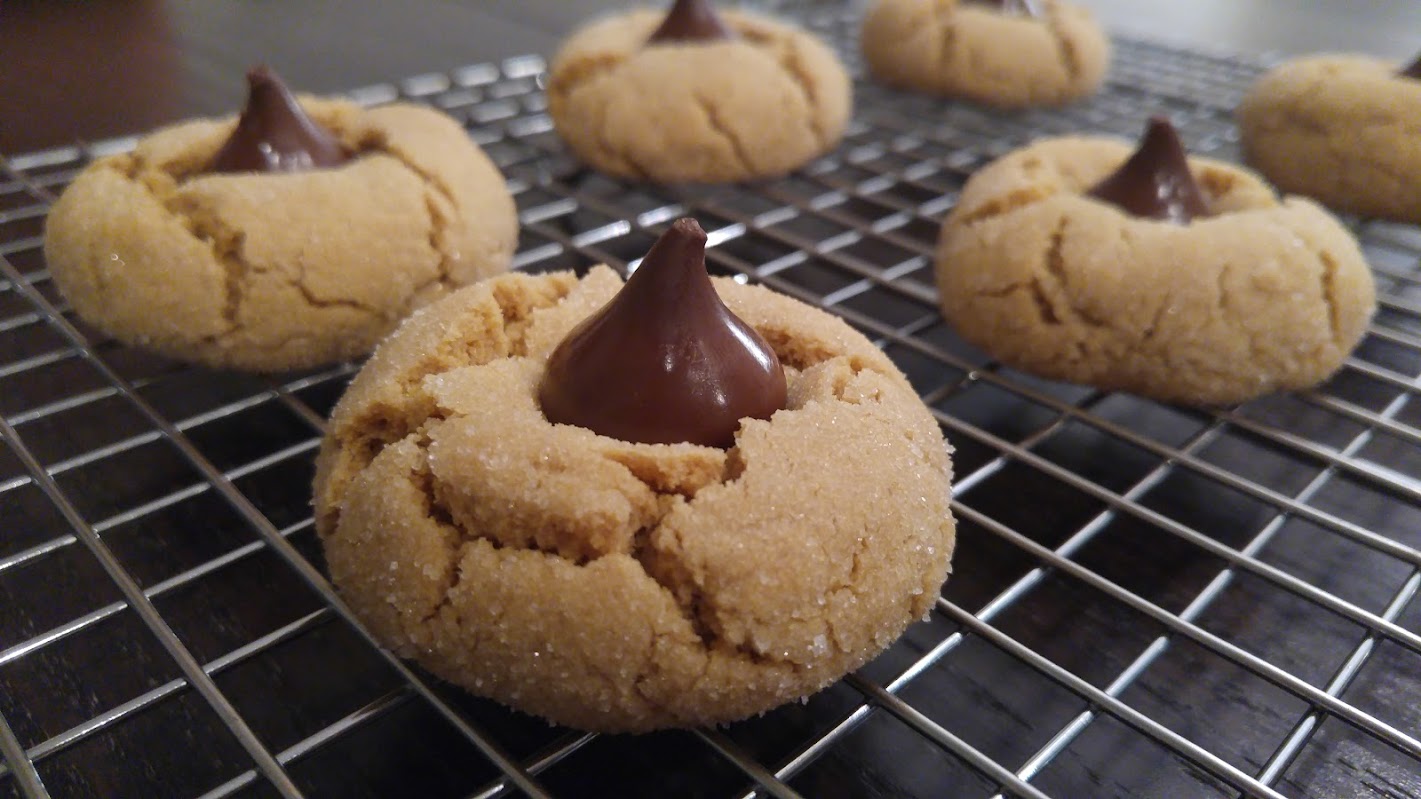