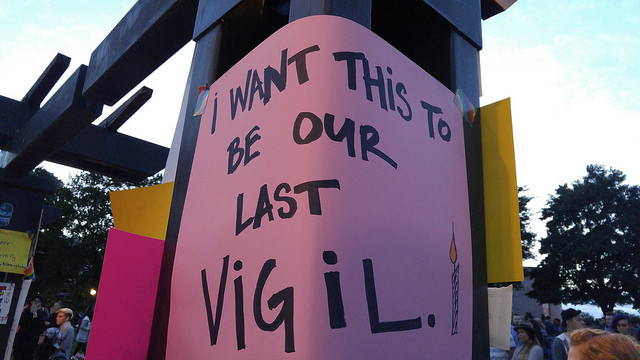 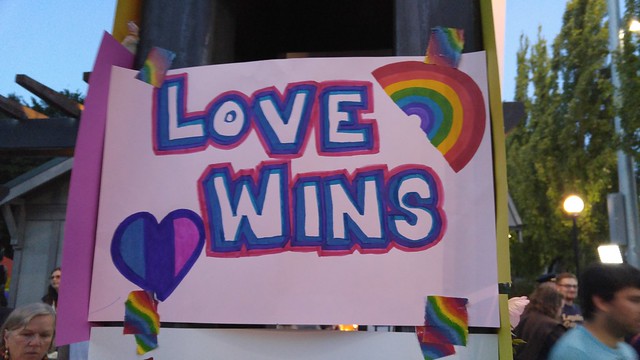 Yesterday, I left the house without kissing him goodbye. I thought I might wake him if I did that, and I wanted him to sleep, and to delay the moment when he got up and saw the news and wondered what the hell was wrong with us and our country and laws.

So I snuck out without kissing him, but I looked at him and marveled at how his hair does not move when he sleeps, which may be a sign that he uses too much product but which I prefer to regard as evidence of his own indestructibility. That he will survive storms and wars and watch the stars die out, all with perfect coiffure. 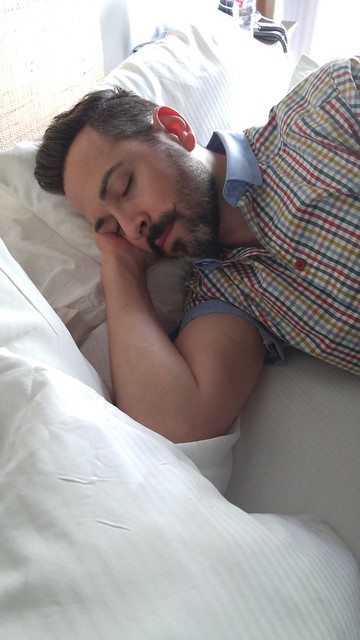 My beloved taking a siesta in Grenada. Note the perfect hair.

Do that for me, beloved, will you? Walk this earth for an eternity. Live for centuries.

I left the house early to meet a friend, and we walked around the lake near where I used to live. We hadn’t seen each other in years, and we talked about everything except for the news out of Florida, except for the thing that everyone was talking about. We shared photos of our nephews and we talked about how turning 40 was on the horizon, how we could see it. We remembered friends who had died and the boys who used to love us.

I hugged her goodbye and I called my beloved from the car.

“Did you see what happened?” I asked him.

And neither of us knew what to say after that. That night, I walked through the park, through the remnants of the vigil we’d missed (we attended another sort of quiet celebration of life, one that involved dinner with friends and Rand reading bedtime stories and agreeing to have his perfect hair re-styled by a four year old. And after the dozen rainbow barrettes were taken out, and he rearranged a few strands, it was flawless again.) People milled about holding candles and hugging one another and one sign captured everything succinctly. 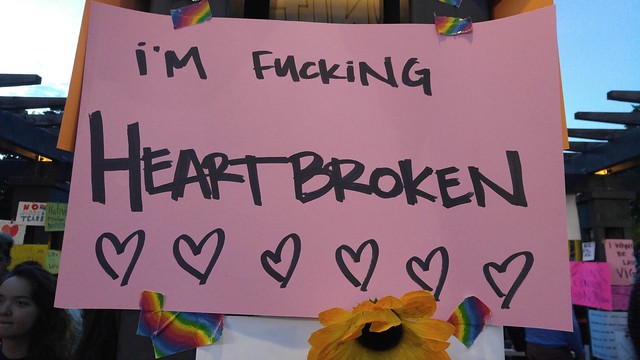 When I was young I lost a friend to gun violence, and I remember being genuinely surprised the next day when the sun came up. I thought the earth would stop. I thought everything would stop. But tomorrow had happened. I suspect today that many people are having that same revelation. That their own worlds are shattered and somehow the earth has the audacity to keep moving. 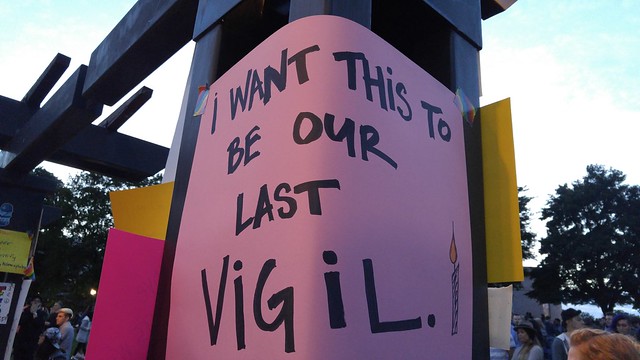 This morning, I walked up behind my beloved, and I wrapped my arms around him. And I thought of my many, many friends who are in love, and how only some of them felt safe expressing it. That there were countless times when they had to “tone down” who they were in the interest of self-preservation. That America is profoundly dangerous, but it is infinitely more dangerous for so many people who aren’t white, straight, cis-gendered me. I squeezed him so hard I thought his ribs would crack.

“Promise me you’ll live for a thousand years,” I said to him.

Promise me that love will win in the end.