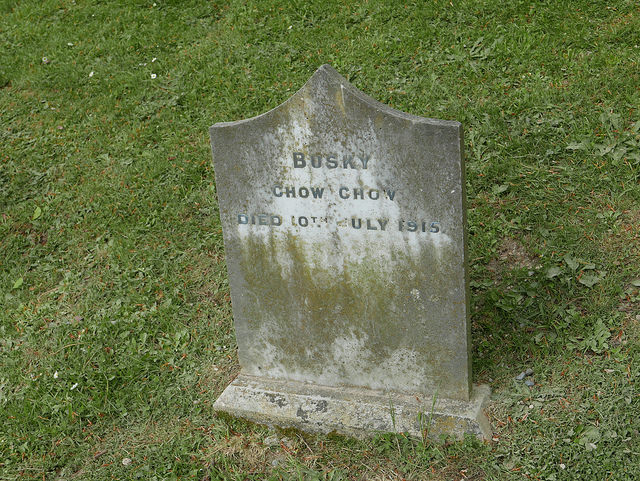 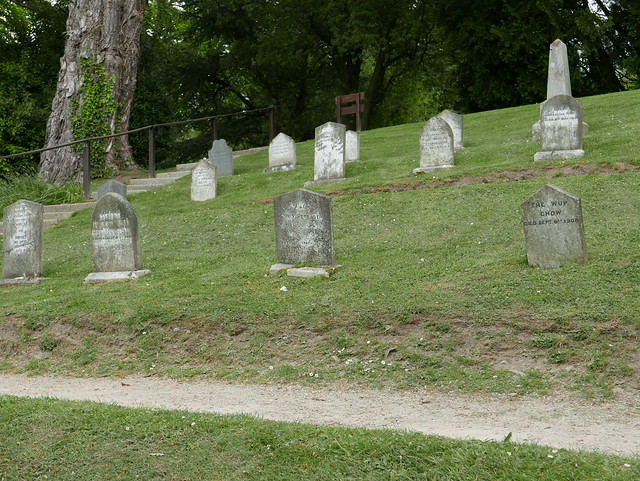 This is the greatest goddamn cemetery ever.

Note: I started working on this post a while ago. I delayed publishing it, because it’s about laughing in a cemetery, and the empty void where my heart should be told me that putting that up in the wake of the horrible tragedies we’ve experienced wouldn’t be appropriate.

I figured I’d wait until the news got better. And I’m still waiting. And you know what? The news still sucks. And if I wait for it to get better this post will never see the light of day. So I’m putting it up now. It’s about laughing at inappropriate things, which feels oddly appropriate. I hope you like it.

Oh, and before we begin, here is a photo of me and the most handsome man in the world: 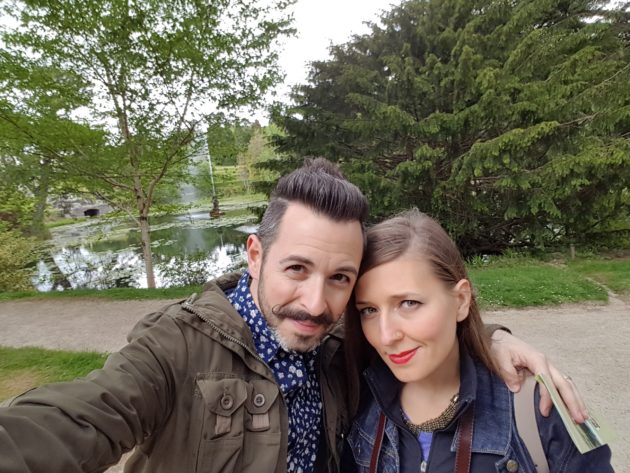 I am standing in the middle of a cemetery and I am laughing. Hysterically. 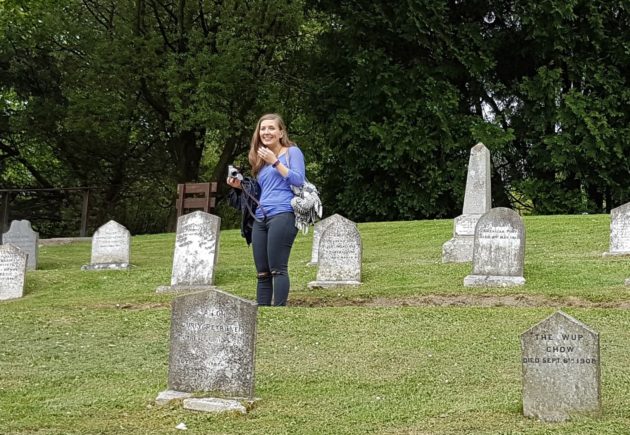 We are on a little path off just off the main lawn of the Powerscourt Estate in Wicklow, Ireland. It’s been voted one of the most beautiful gardens in the world, and while I am the last person in the world to be the arbiter of such an honor, having successfully killed nearly every green thing that has ever had the misfortune of entering my home (or rendered it so miserable that it silently wished for death), I am inclined to agree. The lawns are perfectly manicured and brilliantly bright even under an overcast sky, the wind is blowing softly, and it’s dead quiet as I stand in the middle of these tiny, ancient tombstones, except for the sound of my unfettered cackling. 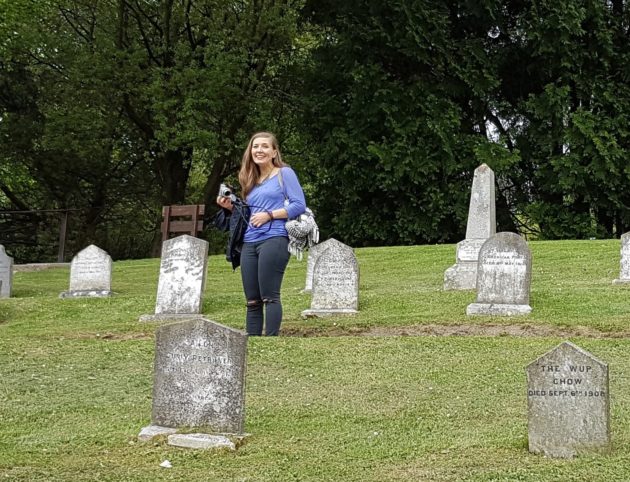 I cannot keep it together. I’m not even trying.

This act should seem tasteless, even for me (should you need further examples of faux pas I’ve committed, please see Everyday of My Entire Damn Life). Yet no one seems to notice. No one even seems to mind.

Because the cemetery I am standing in is devoted to pets that died a century ago, and the inscriptions on their tombstones, combined with the sheer absurdity that this place even exists, is really. damn. funny. 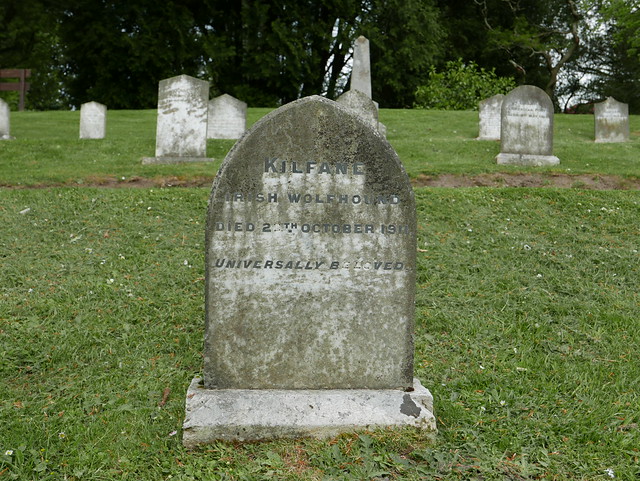 What if there was one dude who actually hate Kilfane but he didn’t want to say anything?

Tell most people that you are near tears with laughter in the middle of a centuries-old animal graveyard and they will likely say, “That’s messed up. No part of that sounds humorous.” Having seen the eponymous Stephen King film at a too-young age, I would normally be inclined to agree (though to be fair, I barely remember watching it, because it was at a slumber party and I was too afraid to actually watch, so I just pretended to be asleep until I actually was. As punishment for my fear and having fallen asleep, miscellaneous substances were smeared on me. Toothpaste, peanut butter, and possibly spit. The most vicious creatures on earth are middle-school-aged girls, and it is likely the memory of the punishment I faced at the hands of my peers that makes me shudder, more than the film I scarcely watched).

But this pet cemetery isn’t remotely scary. It’s just ridiculous. And utterly magical. This is how I want it to go down. When I die, lord, bury me deep, here, amidst the chow-chows. 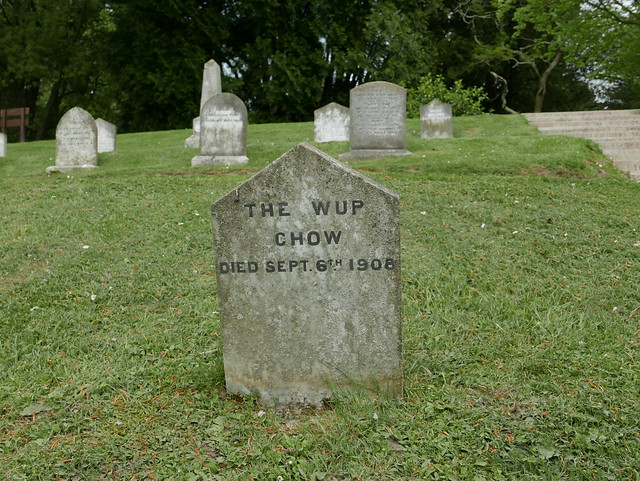 This is the best goddamn rapper name I have ever heard.

Which, by the way, there are a ton of. Apparently a chow was the pet to have in early 20th century England. 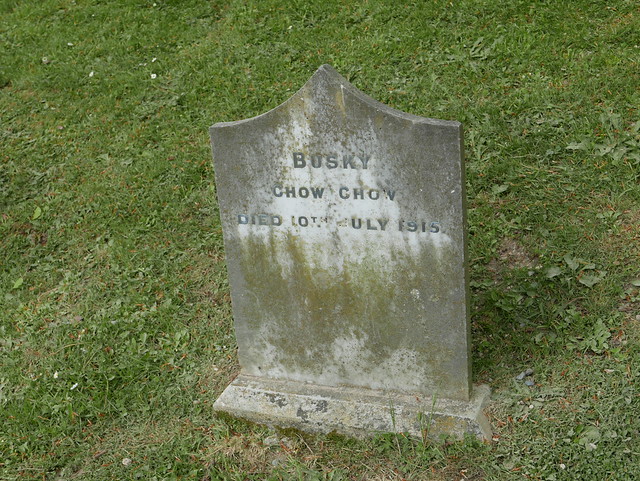 Rand keeps reading the engraving on the above stone as an entire name: “Busky Chow Chow.” Someone will later try to correct us – explaining that the second line denoted the breed –  and we bark them into submission.

“BUSKY CHOW CHOW!” my beloved screams, like a rallying cry. (It has been a month. He still does this.)

This is the miraculous view from the cemetery: 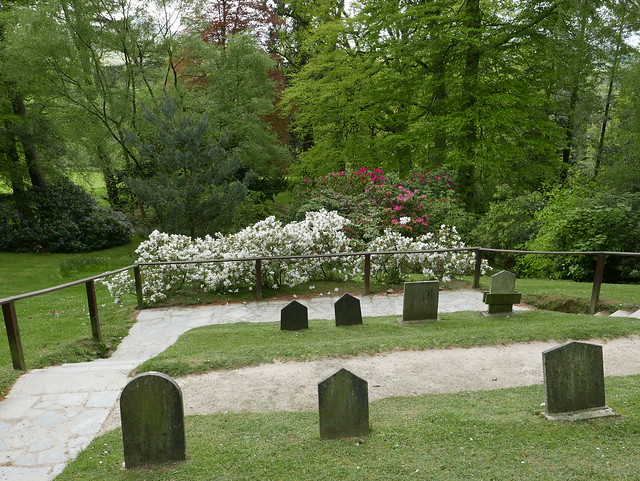 I chew on the notion that it is almost a certainty that my final resting place will not be this glorious.

I begin to create stories for these dead pets, as one does. Sting’s tombstone, for example, clearly suggests that its owners had some serious marital strife. Their pet’s grave became just another opportunity to take a dig at one another. 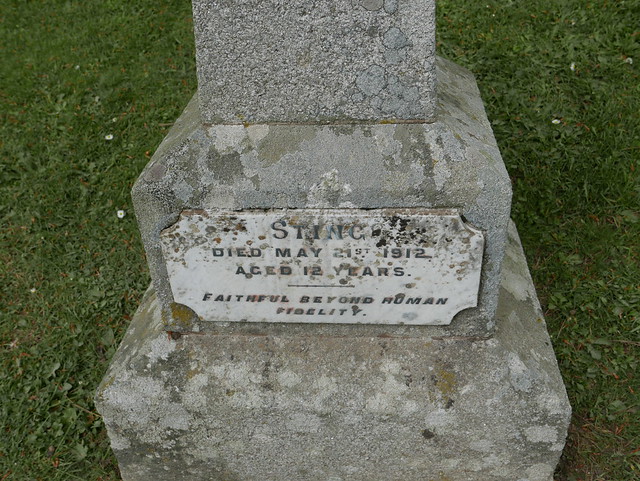 “Faithful beyond human fidelity?” Obviously someone was carrying on with the scullery maid.

Some are less passive aggressive. This one is just darling: 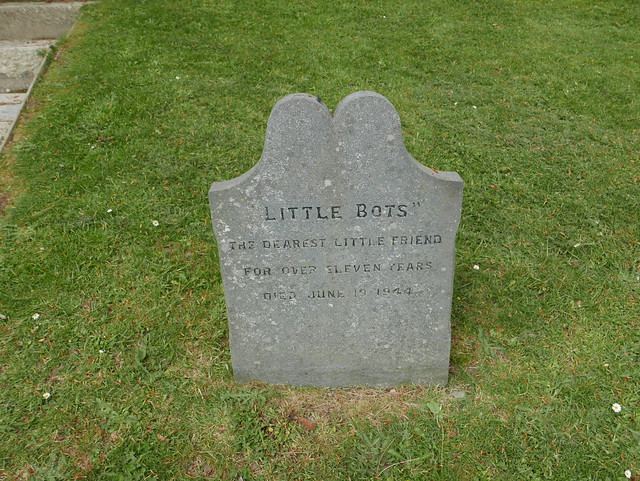 The animal was unspecified, so I’m praying it wasn’t just some short dude.

Then there is this: 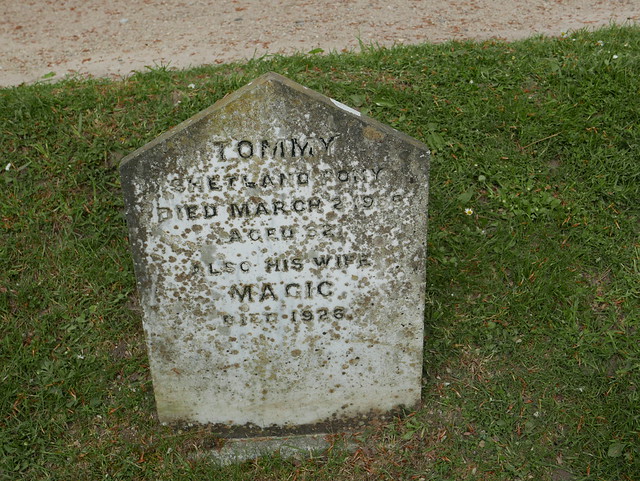 EXPLAIN TO ME HOW A SHETLAND PONY CAN HAVE A WIFE. Based on what I glean from this cemetery, pony marriages were legal in England 90 years before gay marriage was. WTF. PONIES CAN’T EVEN VOICE CONSENT TO BE MARRIED.

Here is another animal that was clearly legally married: 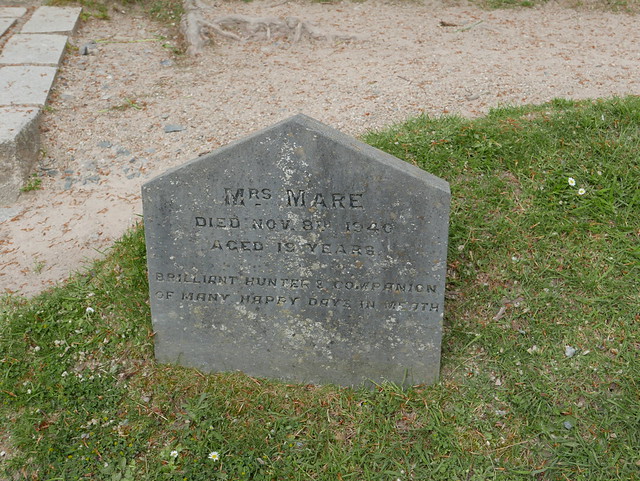 How much money did these people have that they not only had graves made for their pets but they also presumably had pet weddings?

Lots of graves have several names printed on them, because pets tend to be small. 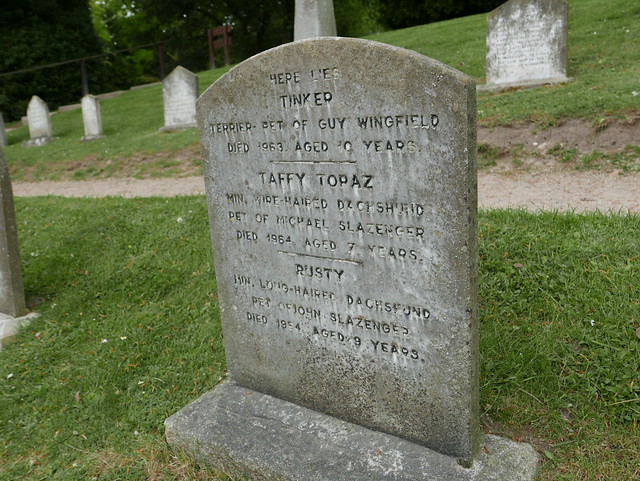 “Taffy Topaz” would be the best burlesque name. I can’t even.

Except for cows. Cows are huge, and I don’t really know how you can fit two in one cemetery spot, and perhaps we shouldn’t think about it too much. 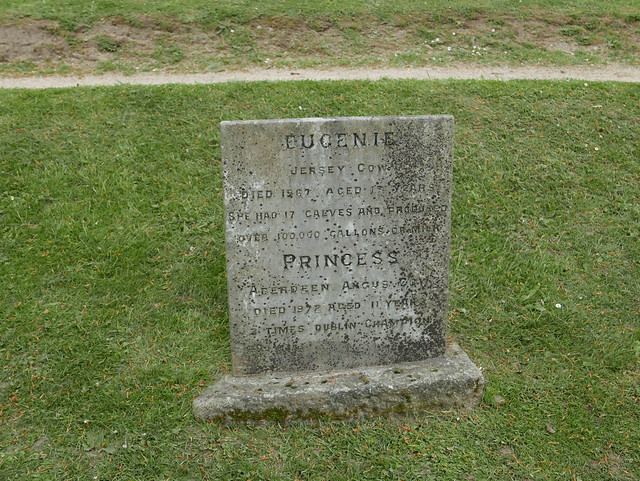 Eugenie had 17 calves and produced over 100k gallons of milk. And apparently Princess was a goddamn slacker and did jack shit.

On a related note, I sort of want my tombstone to denote how much milk I produced in my life.

Here lies Geraldine. Produced zero gallons of milk, but one time she had a really big poo and she tried to tell her husband about it and he threatened divorce.

I stand in a cemetery dedicated to dead pets. 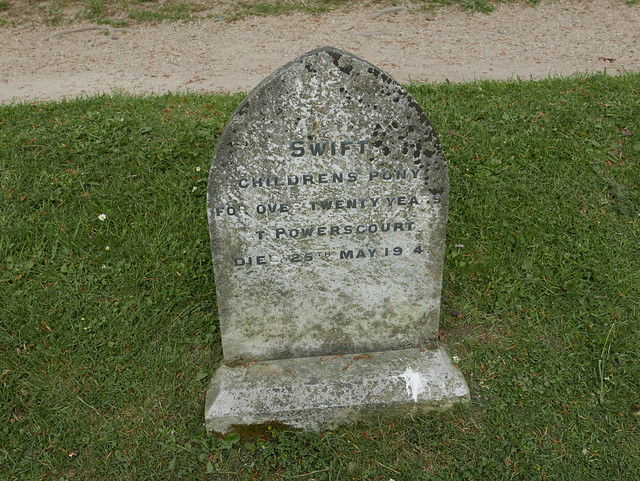 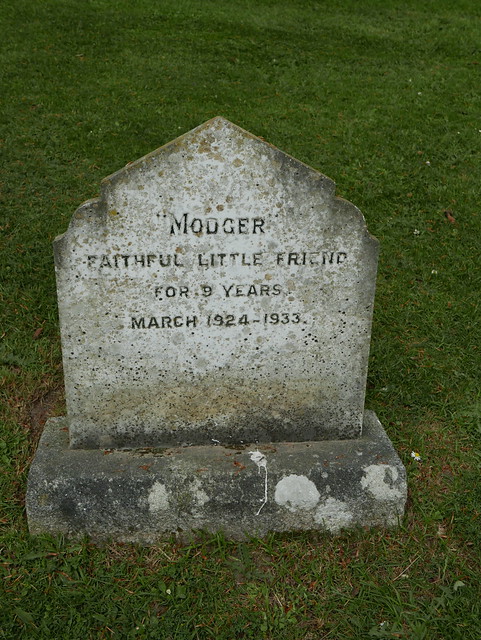 What if it was actually “Rodger” but the guy ordering the tombstone had a cold that day?

And I cannot stop laughing.