Skip to content
Posted in: Nothing to Do With Travel, Personal Essay 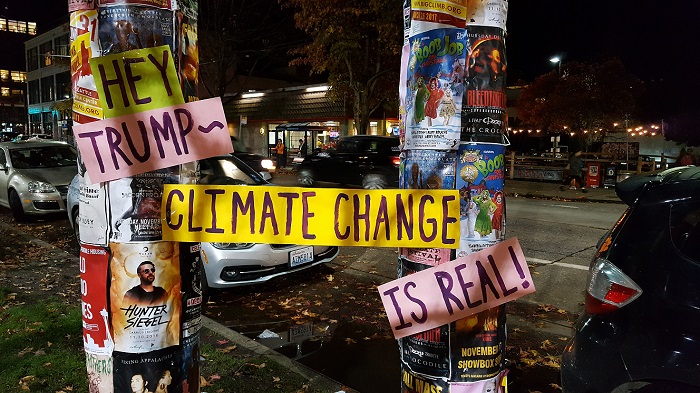 If you are about to tell me that you don’t read my blog to hear my thoughts on politics, then … well, honestly, I’ll find that sort of confusing. This blog has always been more of a reflection of myself and my life than a travel blog, anyway. This blog is about how I see the world. Sometimes people agree with me. Sometimes they don’t. Sometimes I dye the milk pink and people tell me I’m a horrible bitch for it.

So if you don’t like this post, you don’t have to read it. The plot of the blog will probably still make sense without it.

Last week, Clinton lost the presidential election. This fact, in and of itself, is disappointing to me. As Lindy West notes, as women, we’ve been waiting for so damn long to be acknowledged as being good enough. We had a candidate who was more qualified than possibly any other in recent history. A woman who was ready to shatter the glass ceiling and prove that even the United States was ready to step into a new chapter of history, like Australia, Germany, Denmark, England, Thailand, and so many other damn countries before us have already. One where a woman could lead the country. One where women’s equality wasn’t simply prioritized, but was personified in our leader.

But I’m okay with losing elections. I’m a Democrat who was born at the end of the Carter administration and I follow sports in Seattle, so I’m really good at losing in general. As a kid, my softball team won three games in two years. I’m a fucking expert at the honorable mention, at graciously accepting participation trophies, at coming in second, or even dead last.

Let me be clear: I’m bummed that Hillary didn’t win. But I’m terrified that Trump did. I’m scared of him in a way that I wasn’t about McCain or Romney or Jeb Bush. Because while I disagree with those men on their political ideologies, I don’t necessarily think they are bad men. But Trump literally bragged about grabbing pussy, harassed and threatened Clinton at every opportunity, and his entire campaign was characterized by hate (of Muslims, of Mexicans, of women, of the black community, of undocumented immigrants, of anyone who gets an abortion, of Gold Star families, of SNL, of Rosie O’Donnell), and he still won the presidency. I mean, Russia, Wikileaks, and the FBI helped, but still. He won.

His supporters, to my understanding, are not worried about this. Many argue that Trump doesn’t mean what he said. That’s he’s just talking.

I am confused by this. If someone says hateful things again and again, indeed, if someone runs a political campaign based on xenophobia, I have trouble dismissing that. I don’t understand how people are deciding which of Trump’s words to listen to (“He’s going to revitalize the economy!”) and which to ignore (“He’s not actually going to make a Muslim registry!”).

How do you make that delineation? How do you decide what he’s being honest about and what’s a lie? I’m not asking a rhetorical question – I need to know. Because hoping that a politician “didn’t mean” a component of his campaign is a weird position to take.

But, okay, fine – that’s what some people are doing. They voted for Trump, and don’t hold all of those same ideals. Some, of course, do. This woman on my cousin’s Facebook feed said that she didn’t understand why anyone would be outraged about a database for Muslims. She argued that it was “necessary to avoid casualties.” 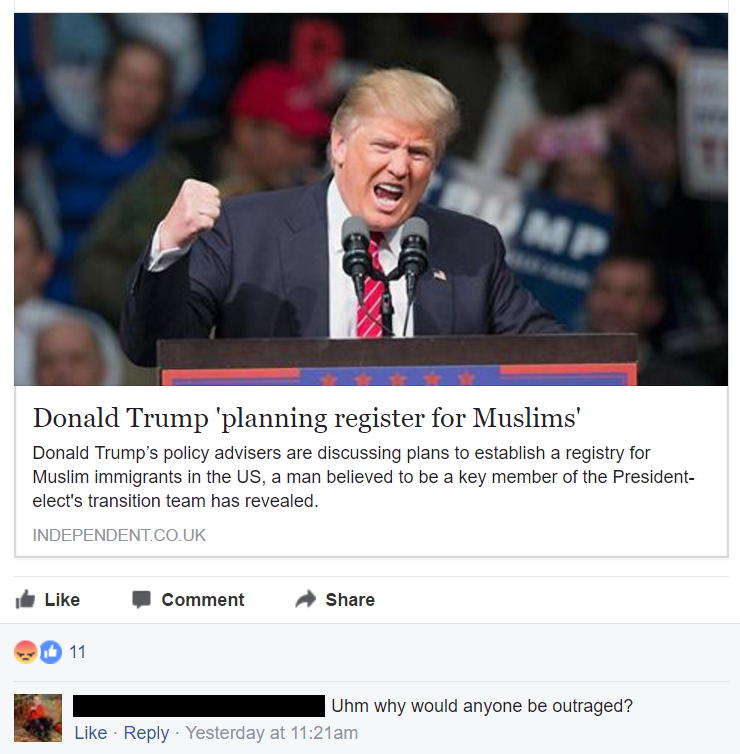 (I tried engaging her but she got angry and had her husband take over her comments, and he kept responding to comments about genocide with “LOL” so that didn’t really go anywhere.)

But let’s assume that most people aren’t that horrible. They disagreed with what Trump said. They thought it was unkind and wrong. But they still voted for him. All of the xenophobia and the intolerance were somehow not a dealbreaker.

I still have trouble with that – because those things are a dealbreaker for me. If you ridicule a disabled person in my home, I would never speak to you again, much less think that you should be president. Someone saying that we should “grab women by the pussy” has no place in my life. Someone who said that Mexicans are rapists is not someone who I would want to silently share a subway car with. If you said shit like that, I wouldn’t want you to lead a fucking parade, much less my country.

Being able to selectively dismiss some of his comments is a luxury that many of us do not have because we – and the people we love – fall into those groups he’s attacked. Trump’s words frighten us because they are about us. And when he was elected, it was a message to the world that all of his ideals were okay. The ballot doesn’t let you pick and choose.

“But I don’t think those things are okay! I think that he was just talking. I voted for him because I wanted change.”

Right. Let’s say that a politician says that they want to lower taxes for everyone, and that trees are terrible, so we should clearcut Yellowstone. You vote for them because you want lower taxes – you don’t believe the Yellowstone stuff, and frankly, are completely against it (you love trees). But after the election, a bunch of people are psyched about the prospect of cutting down Yellowstone, and lo and behold, there are loggers poised at the park gates on January 21st. But even before then, other tree-haters feel emboldened to start cutting them down themselves.

And you might not agree with that, but you don’t get to be surprised by it. You aren’t blameless in it happening. Because it is literally what you voted for.

The people who cast votes for Trump didn’t so with asterisks that said “Excluding the xenophobia”. They voted for him. Perhaps without meaning to, they voted for this:

As long as I live, I will never understand how this alone wasn’t the end of it. pic.twitter.com/2MaLkBJ2Xo

And some people voted for him precisely because of the hateful things he’s said, because they align perfectly with their beliefs. They think that there should be a registry of Muslims. They think that a wall between us and Mexico is a good idea. Some staunchly believe that people of color, people with disabilities, people in the LGBTQ community are inferior. And when Trump surrounds himself with people like Mike Pence (who believes that gay conversion therapy is a good idea, and whose diversion of funds caused an HIV epidemic in his home state) or Steve Bannon (who went on record saying there are too many Asian CEOs in Silicon Valley, called female coworkers “bimbos” and threatened violence against them, and said that he didn’t want his daughters going to school with Jews), the people who hate are empowered.

Now that Trump has been elected, their xenophobia and rage has been validated – and there’s been an uptick in hate crimes across America. I’ve read about it, I’ve heard stories from friends, I’ve seen it happen in my own life and my own neighborhood.

“It was almost as if with the election of Donald Trump that his followers, the adherents of far-right ideology had seen a green light to conduct themselves and purport themselves with complete disregard for humanity and politeness.”
– Ryan Lenz, Southern Poverty Law Center

On election day, the love of my life was wearing a t-shirt I bought him with “FEMINIST” printed across the front. While walking in our neighborhood in Seattle, someone spat on him. Later that day, someone else told my husband, who is Jewish, that he should get ready for the gas chamber after Trump won.

This is my husband. He is amazing. Some guy saw his shirt and spat on him today. He just walked away. pic.twitter.com/ItQWU8KmhR

This has been part of a pattern of anti-Semitic comments both he (and I, interestingly) have gotten in the last few months. I’ve already had one person tell me these accusations of violence are media hype – that the scenario above, which happened to one of the people I love most in the world – was a fiction. He argued that this was all anecdotal evidence, even as it piles up in multitudes. He instantly dismissed my worries and told me that the world is safe, even though it very clearly hasn’t been for people I care about.

My friends who are women of color are now carrying pepper spray, but they’re being told it’s paranoia. That it’s all in their heads. 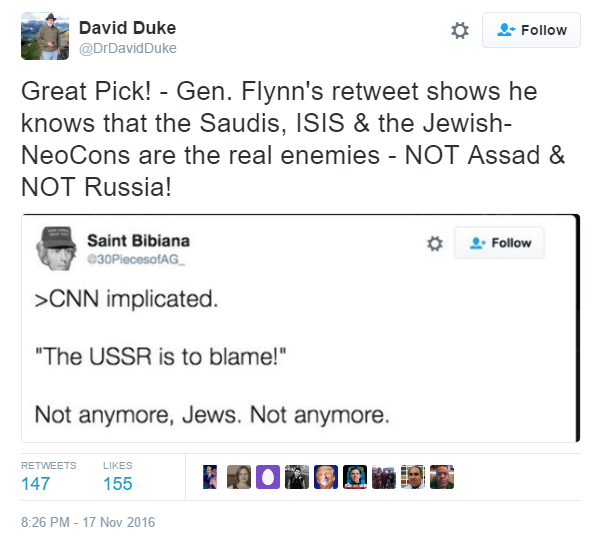 This scares the shit out of me. If you or someone you care about falls into any of the categories I’ve mentioned in this post – if they are black, or Hispanic, or gay, or trans, or Muslim, or Jewish, or any number of other things which just aren’t quite white and straight enough – it should scare you, too. This wasn’t simply about electing a president – this was, as so many people noted, an election about what country we wanted to be. And here is the country we live in: one in which the President-Elect makes fun of disable people and normalizes sexual assault and appoints White Supremacists to his staff – to the delight of the Klu Klux Klan.

And so, for the last week, I’ve been mired in grief. Mine is not the quiet, contemplative kind. It rarely is. My grief tends to be noisy and panicked and involves quite a lot of whimpering for someone who isn’t a canine.

I am scared, because people know my husband is Jewish and have begun making threats about that. 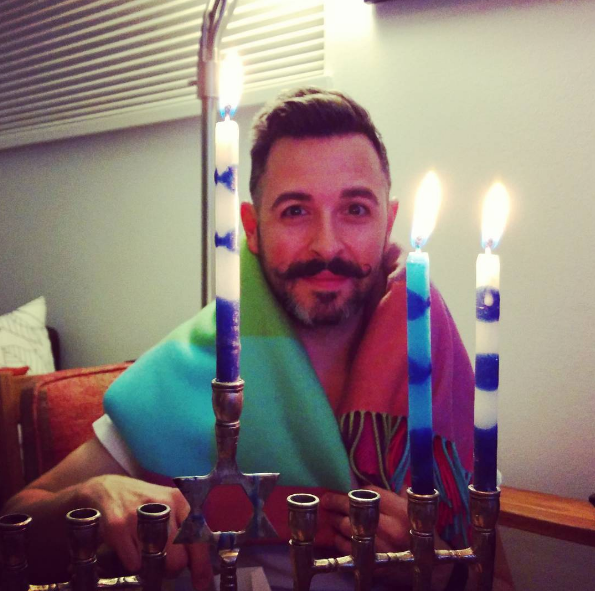 I am frightened because so many of my loved ones fall into the categories that Trump, or Pence, or Bannon has demonized. I wept when I realized how many of the children in my life can’t pass for white. And then I cried harder when I realized that this was something that I, in 2016, was concerned about.

So let’s be clear: I am disappointed that Hillary lost. But I’m terrified that Trump won.