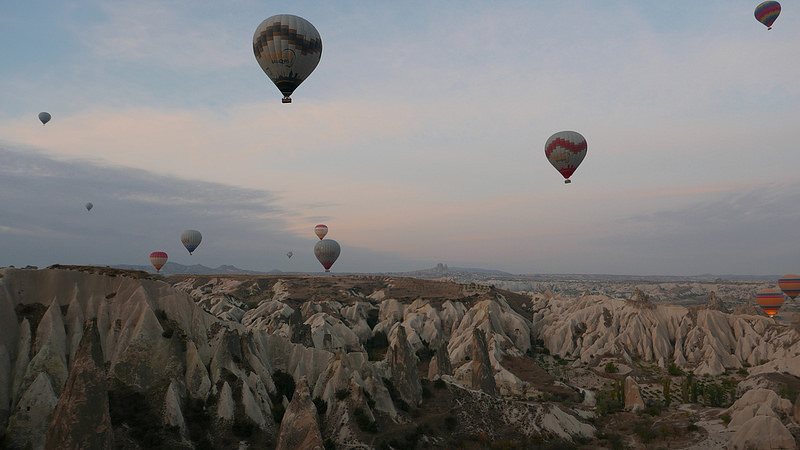 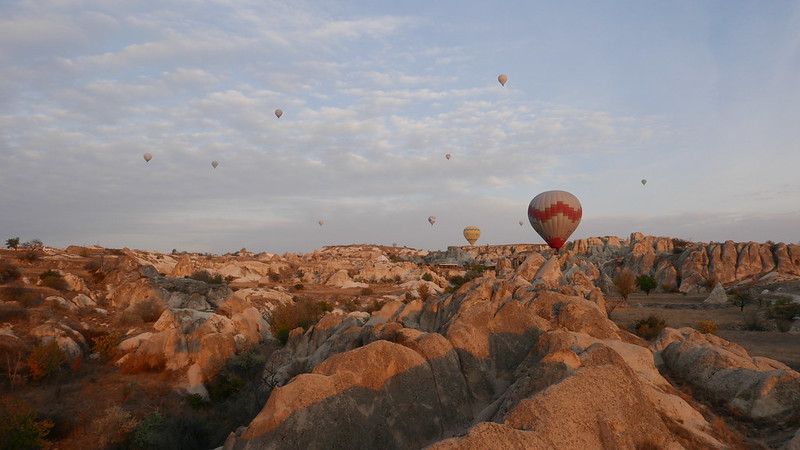 I’ve spent a good chunk of the last week in a panicked rage, watching as our new President swiftly began hacking up the values and the liberties that we as Americans hold dear under the watchful guise of Steve Bannon, the White House’s Chief Nazi Strategist. It reached a fever pitch on Saturday, when he signed an executive order that is – despite some parsing on the part of the Right – a ban on Muslims attempting to enter the U.S. The specific order from the White House was apparently reviewed by virtually no one, and has been applied to green card holders as well as children, some of whom are U.S. citizens (in a response to uproar the White House attempted to halfheartedly step back from this portion of the order). The Federal Courts ruled a stay on the Executive Order, but Customs and Border Patrol continue to enforce it. Protests sprung up around the country and in many airports where detainees were held. 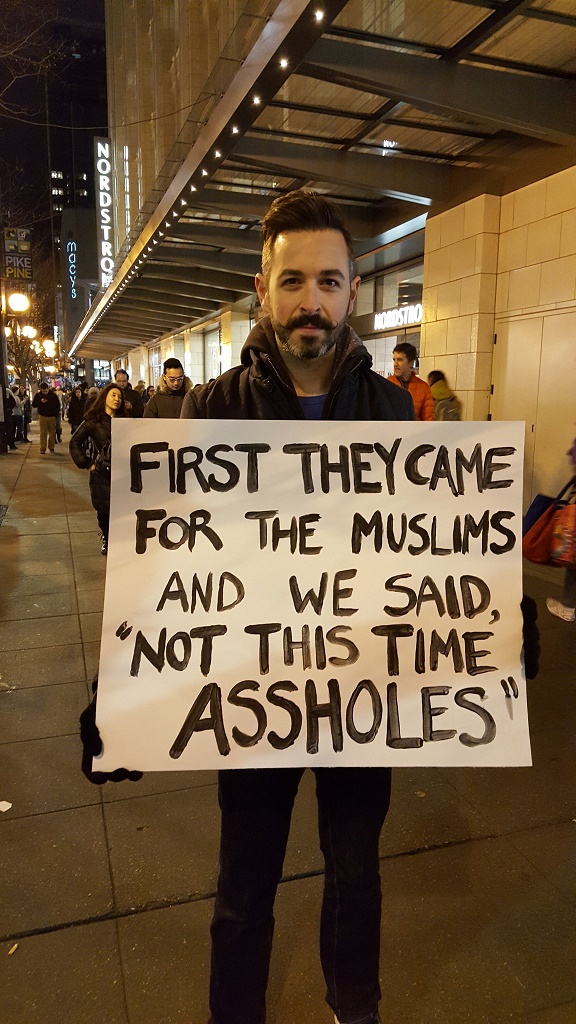 My beloved and I attended a huge rally in downtown Seattle on Sunday night. This was the sign he asked me to make him.

So it was a stressful weekend even for those of us that have it easy. I’ve been trying to figure out precisely what to do besides rage on Twitter, and my beloved reminded me that the purpose of this blog was to evangelize travel, to make people fall in love with the world that I am lucky enough to see, and to give me a thinly veiled excuse to visit lots of bakeries while I’m on the road. And in the midst of all the ugliness that is pouring out of the White House right now, I figured it was time for a bit of beauty. In particular, some beauty from a Muslim country. 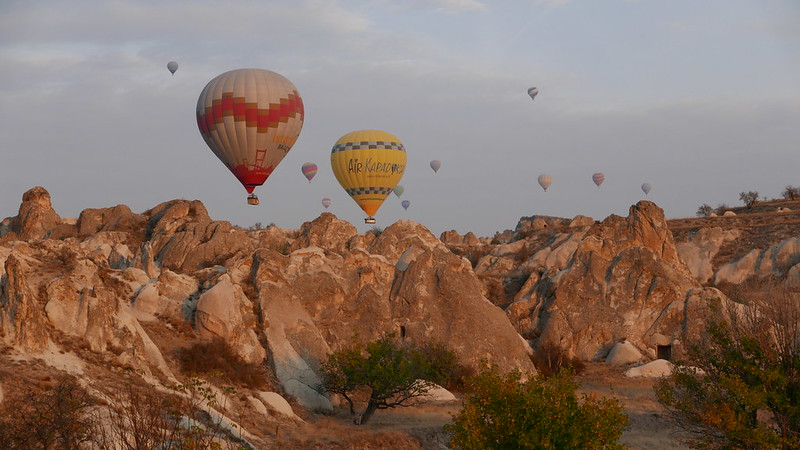 Turkey is not on the list of countries from which Trump has halted immigration and banned refugees, but the population is predominantly Muslim, and since that appears to be the only criteria for the President’s Draconian decree, I suspect that it may only be a matter of time. I will admit, with some measure of shame, that I was anxious when we landed there, that the recent uprising against Erdogan and the bombings by extremists had worked their way into my psyche. Rand reminded me that if I was worried about attacks, I should be equally worried about driving, which is statistically far more dangerous.

But Turkey proved to be (for the time being) safe and beautiful, the trip characterized by the smell of charred lamb on the chilly night air and by warm afternoons spent walking down dusty sun-soaked villages. Each day offered up remarkable experiences and memories, so that the trip soon reached that remarkable echelon of unforgettable, and I found myself heartbroken because I wasn’t sure if I’d ever come back to Turkey, or even how long such an option would be available to Western travelers.

Amidst all of that loveliness, it seems to be jumping the gun to directly dive into the hot air balloon rides in Cappadocia, which remains one of the more remarkable experiences of my travels, but I feel like what I – and perhaps all of us – need right now is an over-the-top dose of something remarkably beautiful. 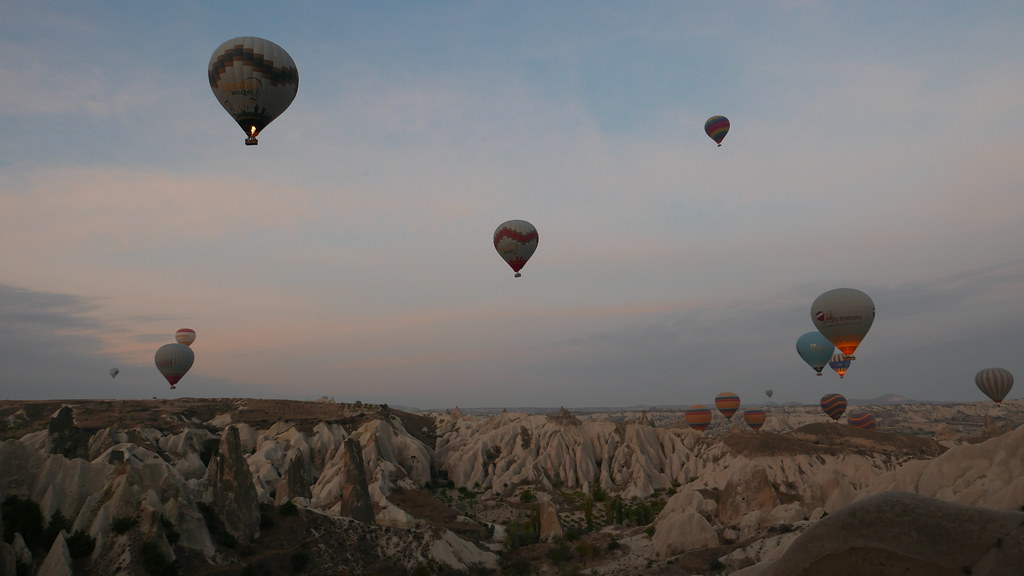 We arranged our tour through our hotel, which seems to be how most tours are scheduled (and we were able to book a tour for the next day – though I’d caution you to plan ahead if you go during a busier time of year). Because so many companies offer balloon rides, the services seem to be pretty comparable and prices tend to be rather fixed, and our cost was about $150 a person, including breakfast before and snacks afterward. And while I can’t definitely say whether or not Royal Cappadocia is the best hot air balloon company out there (I have been on a hot air balloon exactly once and have nothing to compare it to), I would highly recommend it. The staff was friendly and competent, the ride incredibly smooth, the transportation to and from the balloon ride in a blissfully heated van.

Because balloon rides in Cappadocia all leave at sunrise, and our pick up was at the ungodly hour of sometime around 5am. We left our hotel (a remarkable place that deserves its own post – every suite was built into an old cave that once served as someone’s home), were driven to a buffet breakfast at a central office, and then headed off in vans towards the launch sites.

When we first saw the balloons they were on their sides, being filled with air, like massive figs cut in half and placed on the ground. The heaters made a loud whooshing sound, like a deep mechanical exhalation that echoed across the hills, and there were so many balloons being filled that the sound was like a call and response – every whoosh was met with another one. These sounds would follow us up into the clouds, the pilots turning on the heaters to lift their balloons upward. Our pilot explained that up and down was the only thing that they could control – other than that we remained at the mercy of the wind. On a still day, he said, they simply floated in one spot. 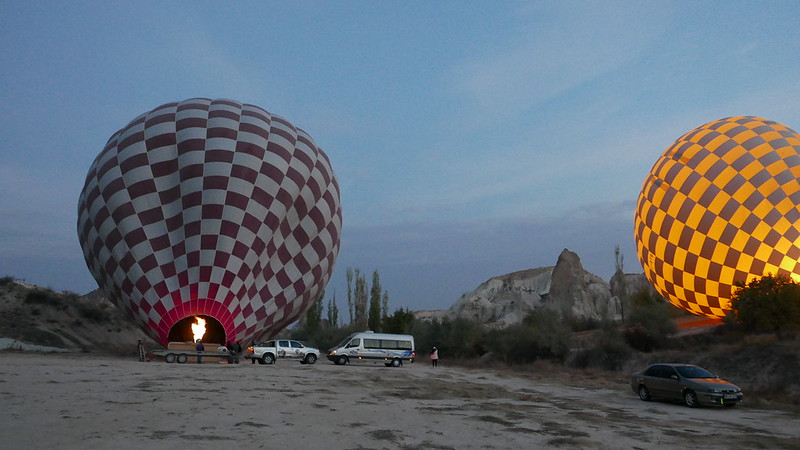 When our balloon was filled we climbed into the basket (for those of you who are skittish, fear not – it came up to almost my shoulder. You cannot fall out.) and our ascent was so smooth that I didn’t realize we’d left the ground at first. We were there in October, and nights (and early mornings) are cold in Cappadocia, and floating through the sky is not a warming experience. I had on jeans, a light jacket and hoodie, a hat and a shawl, and while I was comfortable my hands (exposed to the elements because I can never stop taking photos) got very cold. If you are wondering what to wear, I’d recommend airing on the side of caution and bringing extra layers. No one was too warm. It was also far quieter and less windy than I would have imagined. Conversations were easily heard, and our hair did not whip around (indeed, if it is too windy a day, the tours are cancelled). 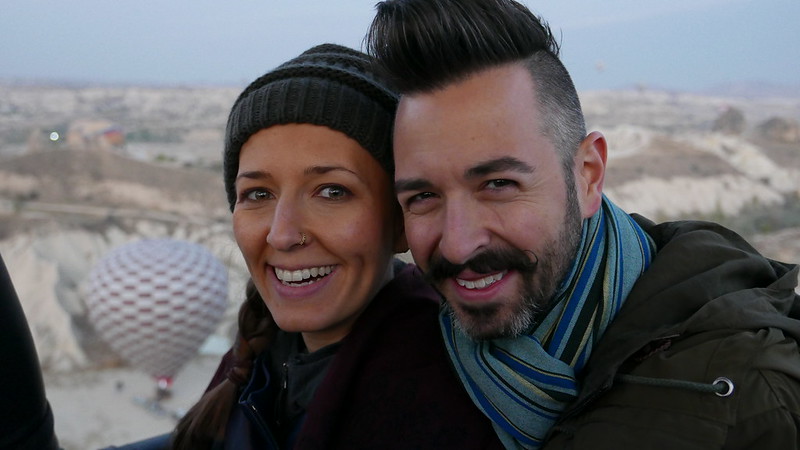 Okay, yeah, so not my finest hour when it comes to hair and makeup but I WOKE UP BEFORE 5 so leave me alone. And ignore that Rand looks perfect.

We were one of the first balloons up and we watched as the others slowly rose around us. The heaters would glow red as they exhaled, so you could pinpoint where the sound was coming from. 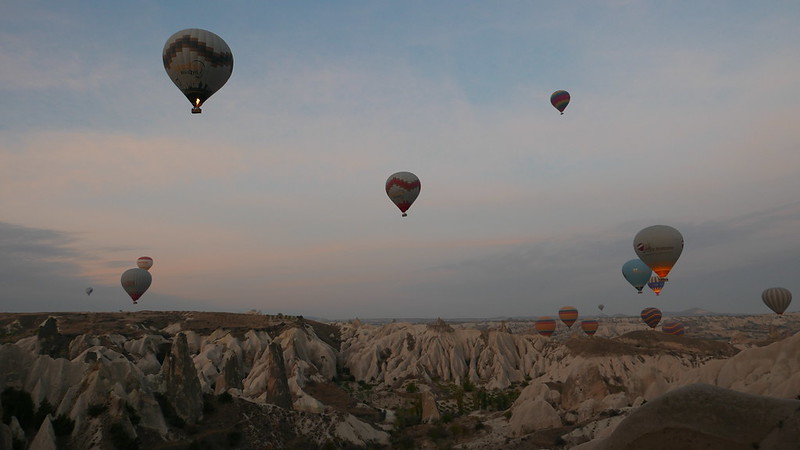 There are some moments that are always a bit too overwhelming for me, and processing all of it and being present in the moment becomes a struggle. I try to appreciate it, but my circuits get overloaded. Ask me what one of my favorite travel memories is and I will tell you about the time that Rand and I, days after we were married, found a broken skeeball machine that kept resetting to give me free games. My requirements for happiness are specific, but they are not grand. 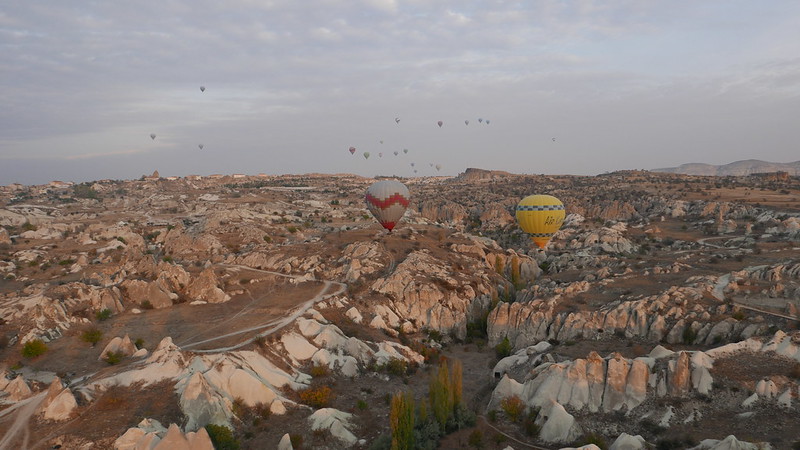 Taking a hot air balloon over Turkey exceeds anything my heart would think to ask for. My cracked brain and I hid behind my camera. I focused on the company of these goobers (and Nora). 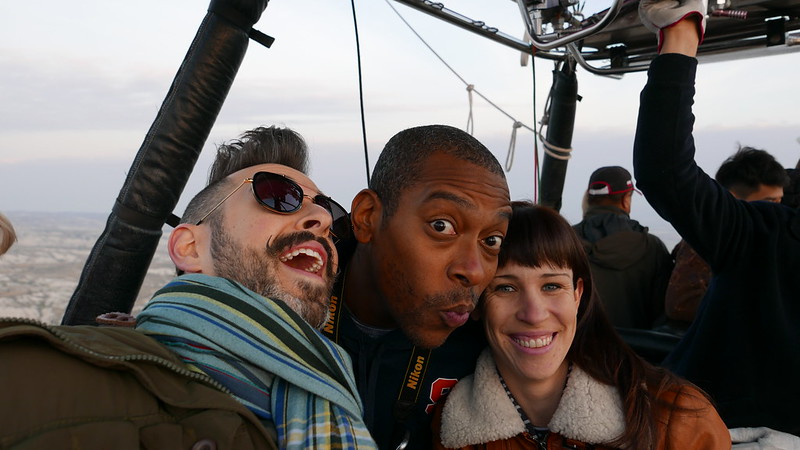 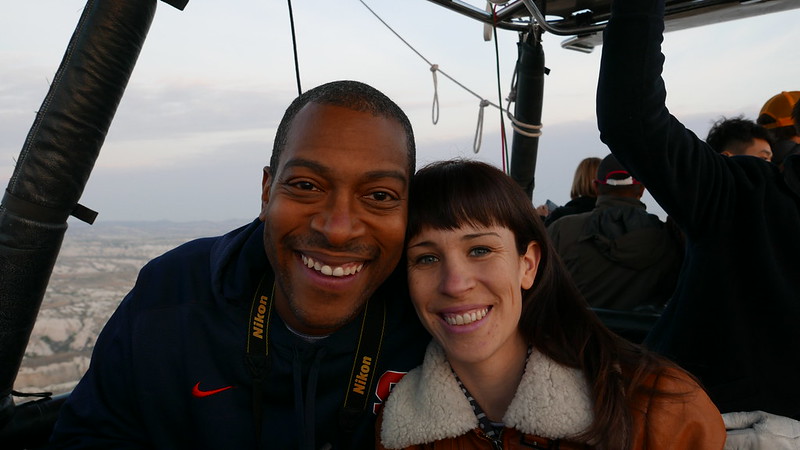 Before long, the sky was filled with balloons and the sun was breaking through the clouds. 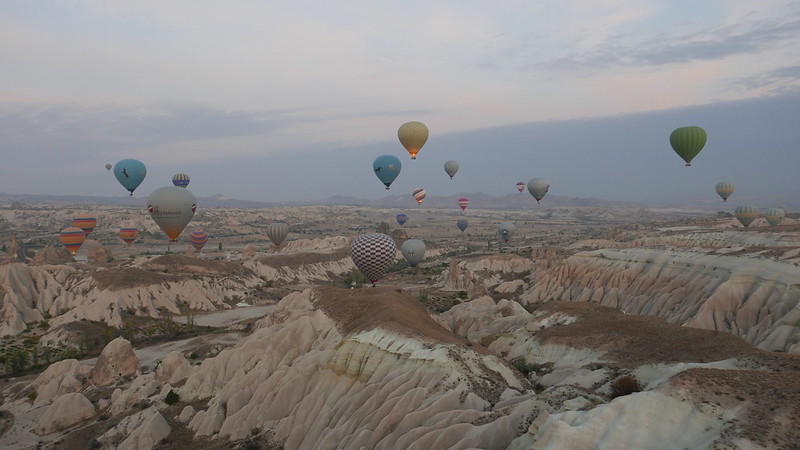 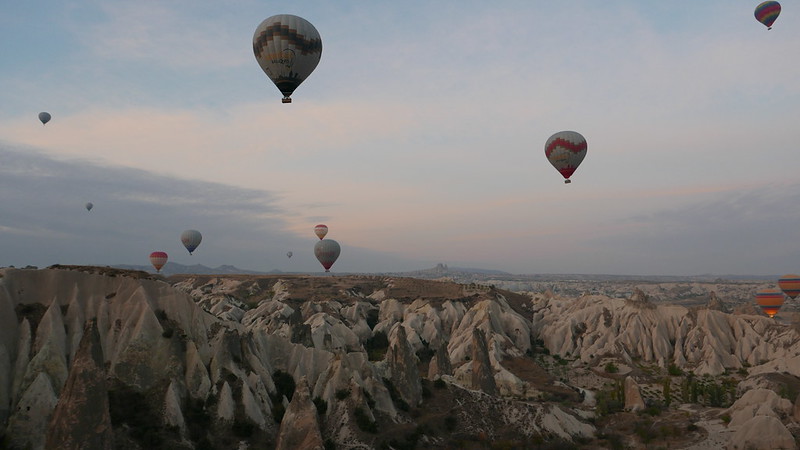 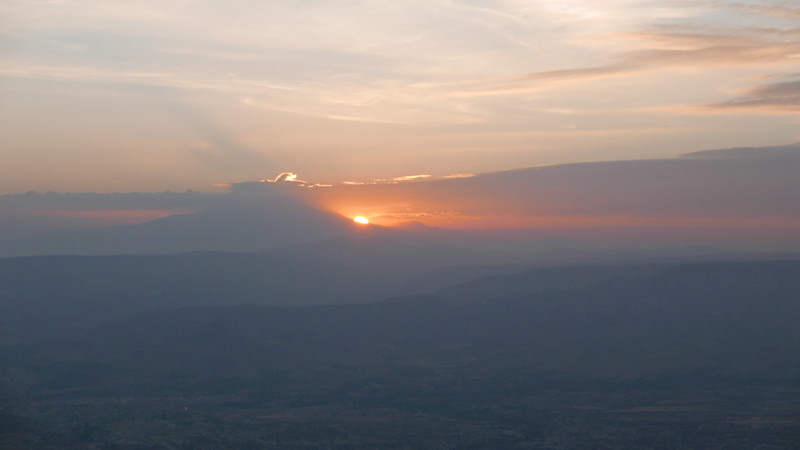 And I saw the world reflected in my beloved’s eyes. 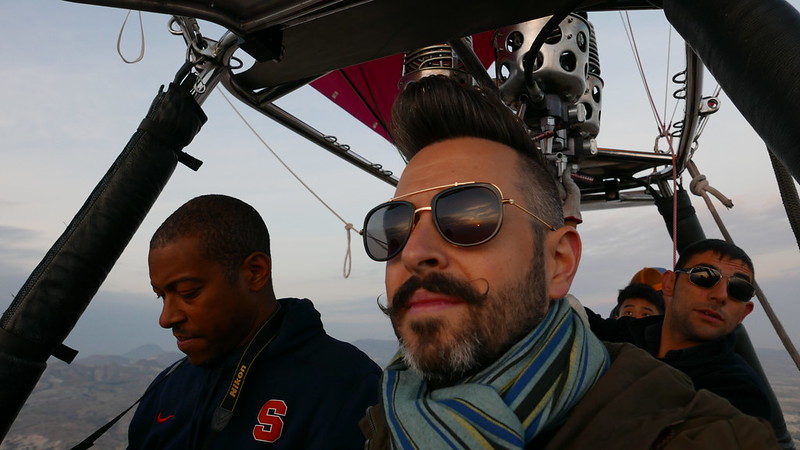 Our pilot kept trying to make us the highest balloon in the sky. He was funny and reassuring and kept cracking ridiculous jokes, so no one seemed to mind. 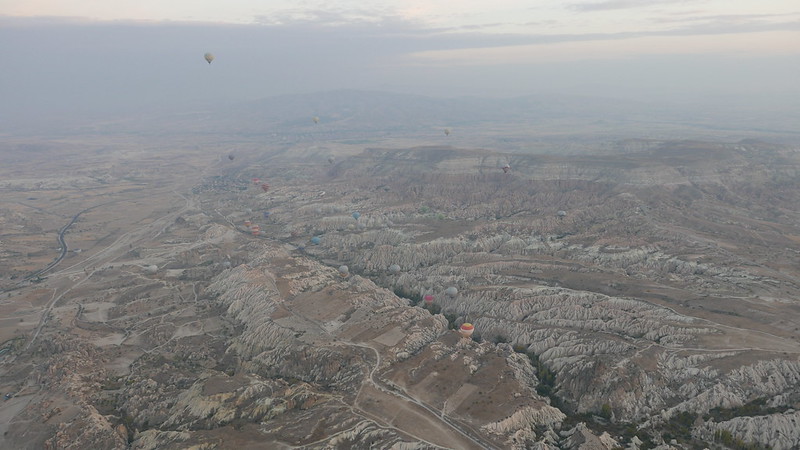 We flew over dusty expanses … 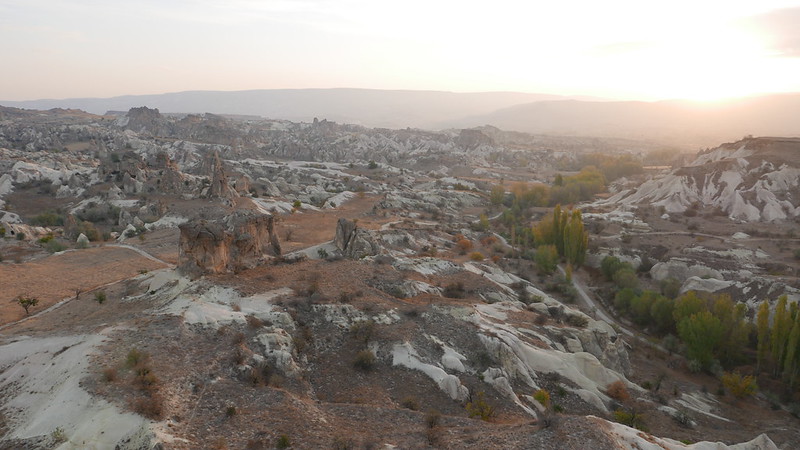 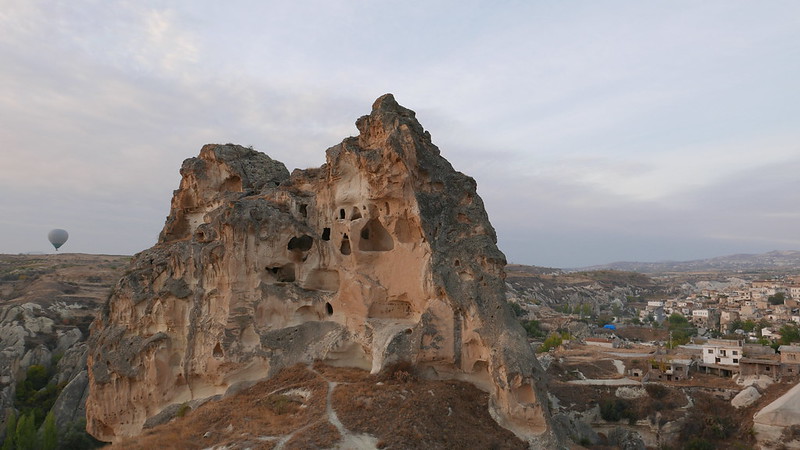 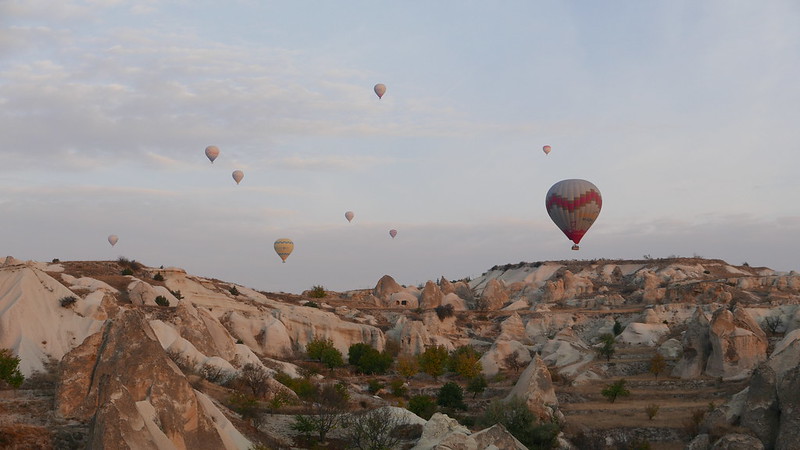 … and over modern ones. 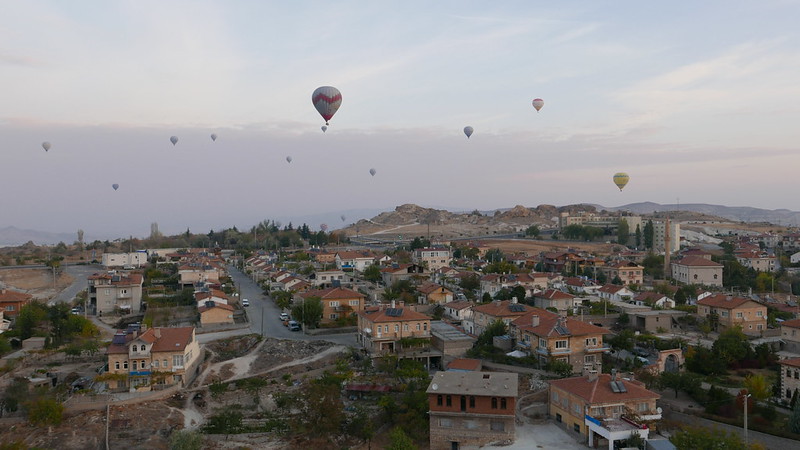 The geological structures you see here are called “fairy chimneys” – a result of erosion. 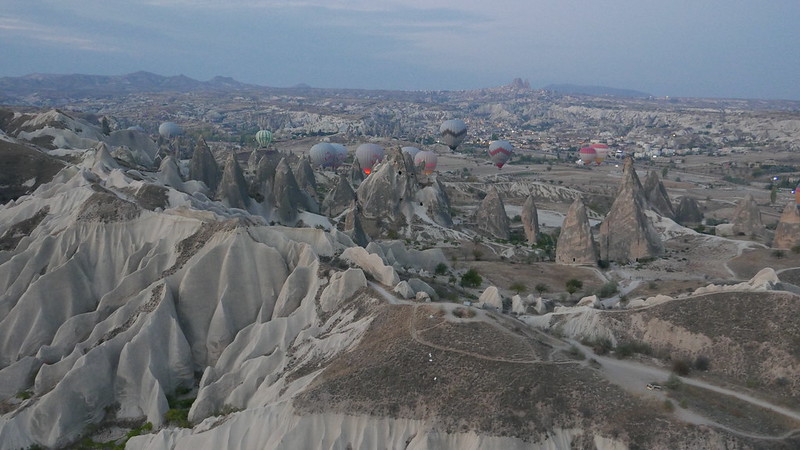 Here’s a closer look from a hike we took later that day: 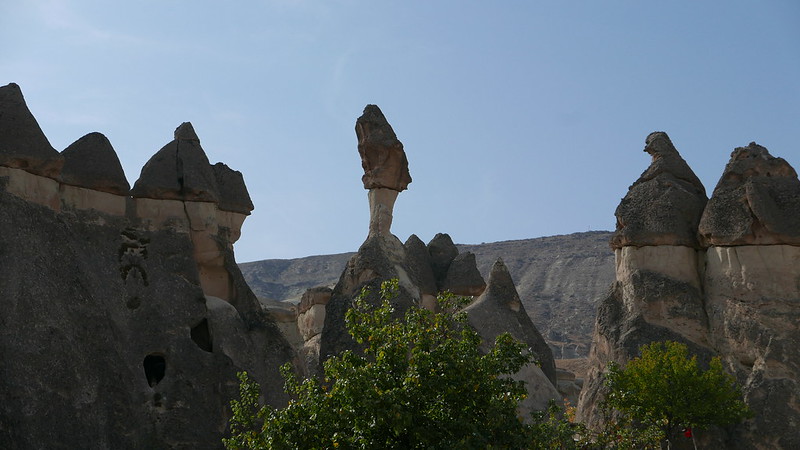 The top layer of sediment is made of a stronger material than the layers below it, so they form these pillars which look like stretched out Smurf houses. (The technical word for this structure is a hoodoo.) Historically, dwellings were carved into these structures, and some people in the region still make their homes in them. 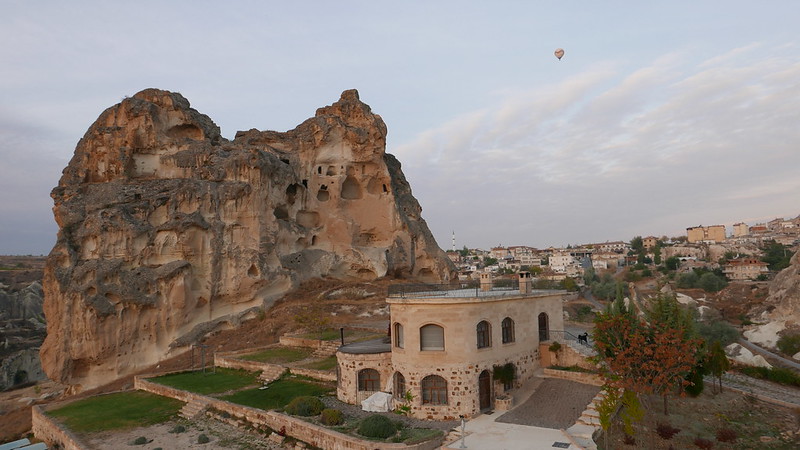 New and old: a modern home sits alongside a hoodoo into which a home has been carved.

At times we were so close to the ground I could have jumped out. 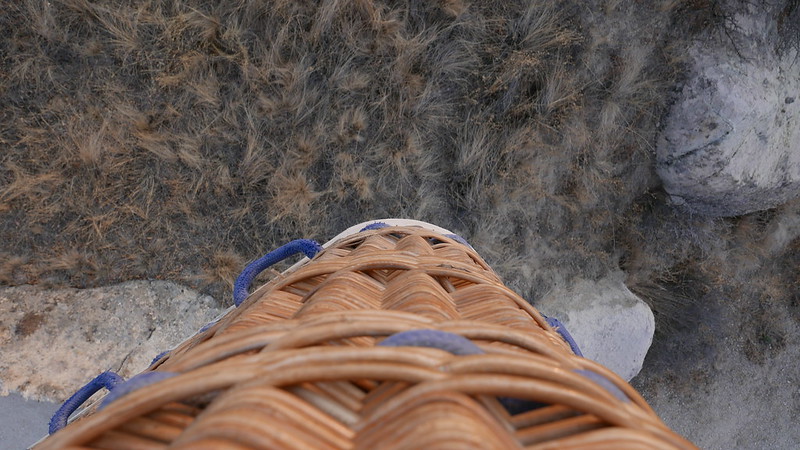 And then we went higher. 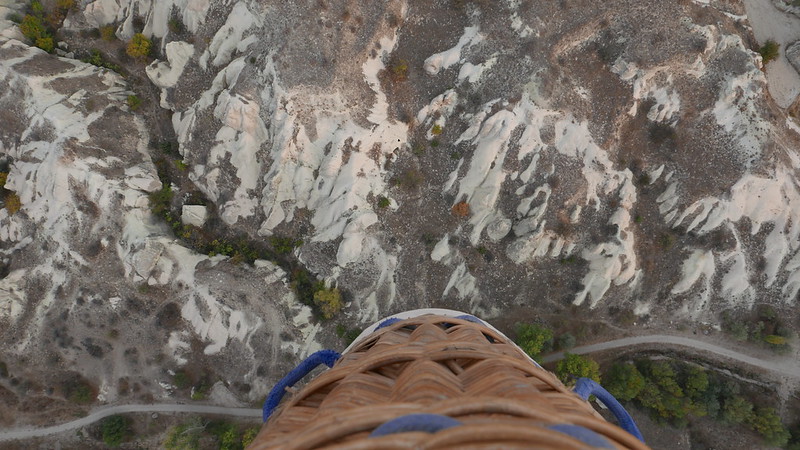 And higher. (Note: I do not recommend jumping out here or at any other time.) 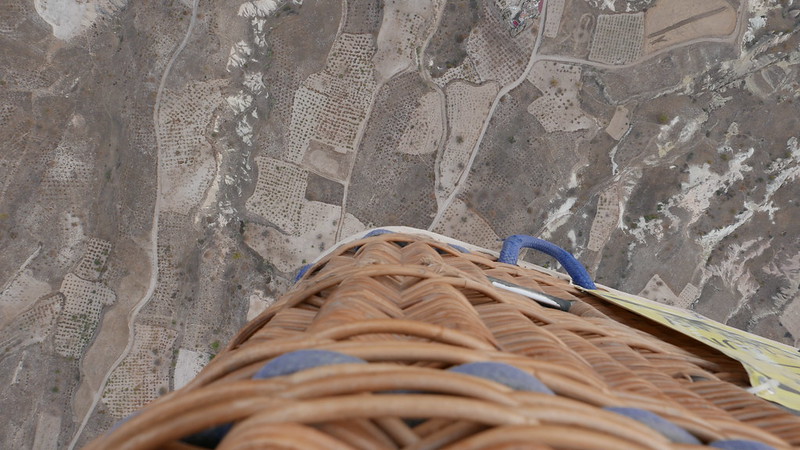 But what goes up must … become a serious source of anxiety. I spent a good chunk of time worrying about the impact of hitting the ground at the end of our ride. The inside of the basket had handles on the inside, near the bottom. Our pilot explained to us that we’d need to crouch down and hold on to those handles upon landing, and the gouges we’d seen in the ground where baskets had forcefully landed seemed like an ominous portent of what was to come.

As we neared the ground, though, our pilot said that we didn’t need to get in position.

“I’m just going to land on the back of the trailer.”

We thought he was kidding. He was not kidding. The trailer was literally a foot wider than the basket and he. landed. right. on. it. (Okay, so he had some help from guys on the ground, but still!) 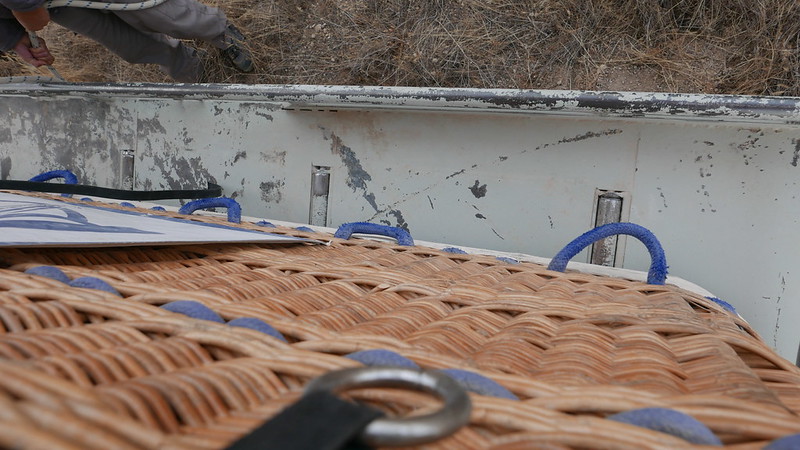 We stepped out onto the ground, and I looked back at our balloon as it deflated. Standing in a dusty field in Turkey, watching this part of the world wake up, I wondered what, exactly, I had been afraid of.