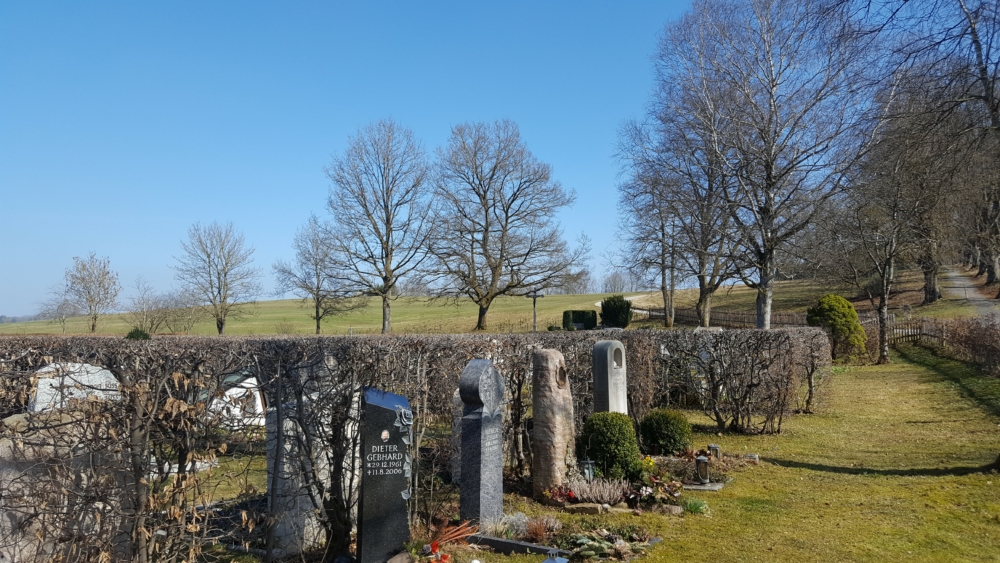 I am scheduled to leave for Germany in several days. I have already told my husband that I don’t want to go, in a whining tone that stretches syllables out so far that the words they once formed are barely recognizable. As a woman nearing the aging of forty, this is how I am coping with the  death of my father, who passed away *checks calendar* … a not insignificant amount of time ago.

I never imagined losing a parent would be an easy thing. But I reasoned that the death of my orderly, logical, unsentimental father would be different. I had loved him, and in his own way, he had loved me. And now he was gone. I had felt sadness – both the intense grief of the moment and the lingering aftermath of it. I felt the pang of finding reminders of him (a global stamp meant for a letter I never sent, a scrap of paper with his handwriting on it), witnessed the persistence of time that rudely passed on without him. I figured I had processed all of these things. Grief was something you push through and then it’s over, I thought, like a workout or a particularly terrible movie. You’ve done it. It’ll never crop up again.

I made the mistake of thinking that grief would be a linear thing. It never is.

Since before I could remember, my father and I lived on different continents. He came to visit my brother and me when we were small, dutifully staying in America for a month every year before returning to Bavaria. Neither Dad nor I seemed to enjoy the time we spent together (my father was never much a fan of children, and the sentiment appeared to be mutual) but I suppose we realized that it was the right thing to do. He never smiled in photos, but wore a scowl so enduring that all his descendants – even my infant nephew – have it. 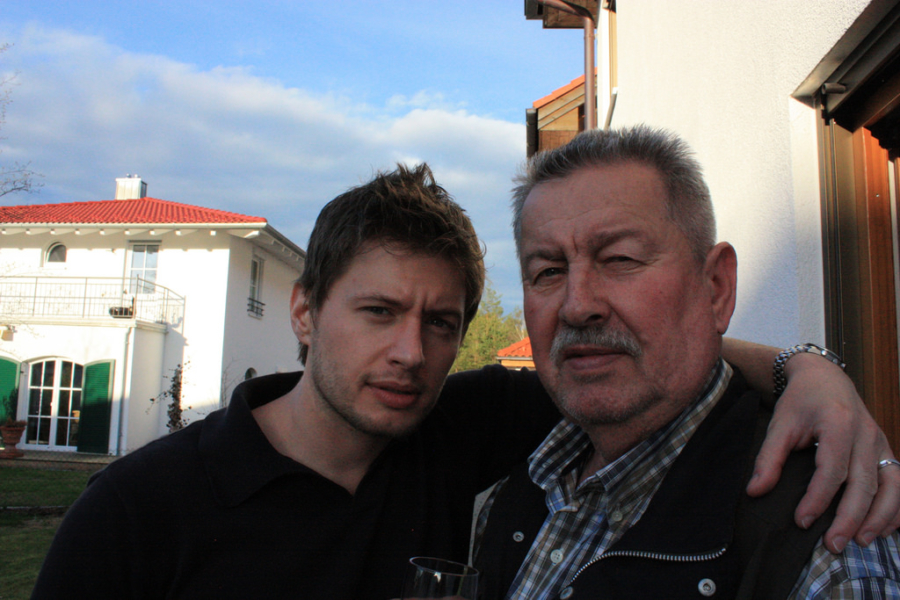 My brother and Dad, making the face that we all have.

His visits became less frequent as I grew older. When he came to visit me the summer before I turned 16, it had been five awkward, pubescent years since his last visit, and his response was a wide-eyed, “What the hell happened.” Not so much a question, but an answer unto itself.

It wasn’t until my mid-20s that my visits with my father approached a sort of regular schedule, thanks to my husband’s work. Each trip followed a similar pattern, and I suspected that my father, who’d spent 40 years in the same job and 60 with the same haircut (stalwarts which outlasted all three of his marriages), had always appreciated that. We arrived during the same time of year, we’d rent a car, drive to the house, explain to my stepmother that no, no, I was not pregnant, share a few meals together, walk through a few tiny Bavarian villages, and head home. Inevitably, we’d receive a few speeding tickets, forwarded to us from our rental car agency, after we got back.

I suspect that the declines in my father’s health were a relatively gradual thing. But seeing him only once a year, he seemed to age at an accelerated rate, much as I had for him. I resisted the urge to ask him what the hell happened. One year he was there, and then another year, he wasn’t. 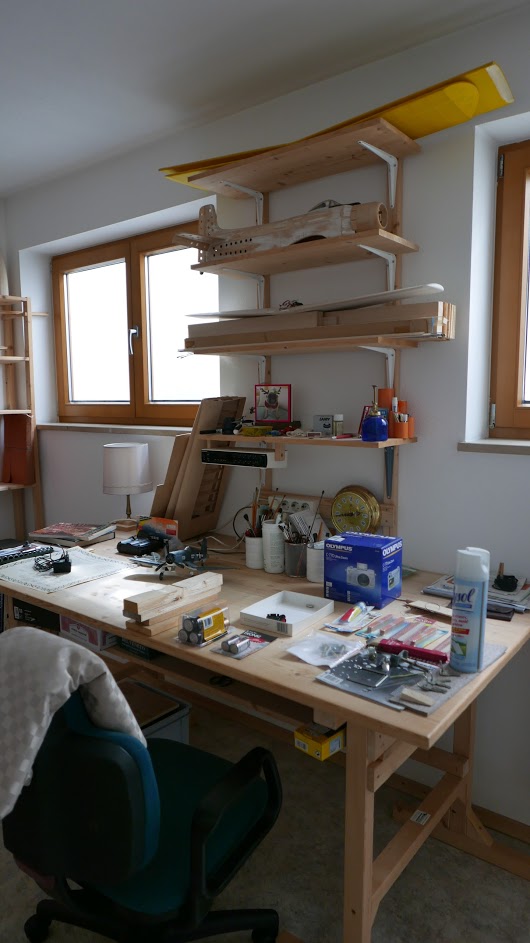 My Dad’s workshop. 3 months after he had passed away and it looked exactly the same.

I did not go to my father’s funeral.

“You have to,” my brother told me. “Only people who hate their fathers don’t go to their funerals.” It was a litmus test of sorts, though I could easily see the flaws in the logic: going to Dad’s funeral wouldn’t prove that I loved him, but missing it would prove that I did not.

The dying rarely ever consult anyone on when would be a good time to depart the earth, and my dad was never big on conveniencing others. His timing was terrible. He died in the middle of a snowy December and his funeral was set for the week of Christmas. Getting there would be near impossible.

When I finally realized I wouldn’t be able to make it – the reality taking form slowly like a Polaroid, I wondered what the ramifications of it would be. I don’t know if it would have made a difference. Even if I’d gone, I’d still have to learn that grief was something that didn’t have precise lines of demarcation.

Months later, I would finally see his grave for the first time – a shockingly organic crag of rock (Bavarian aesthetics are different than American ones) that he shared with his most recent mother-in-law, whom he disliked intensely – and assumed it would offer me some measure of that thing we call closure. But to echo a friend of mine who recently lost his wife: closure is a myth. Death not a finite thing that we get over. Some things stay with us, and after enough time, we simply get used to weight of them. 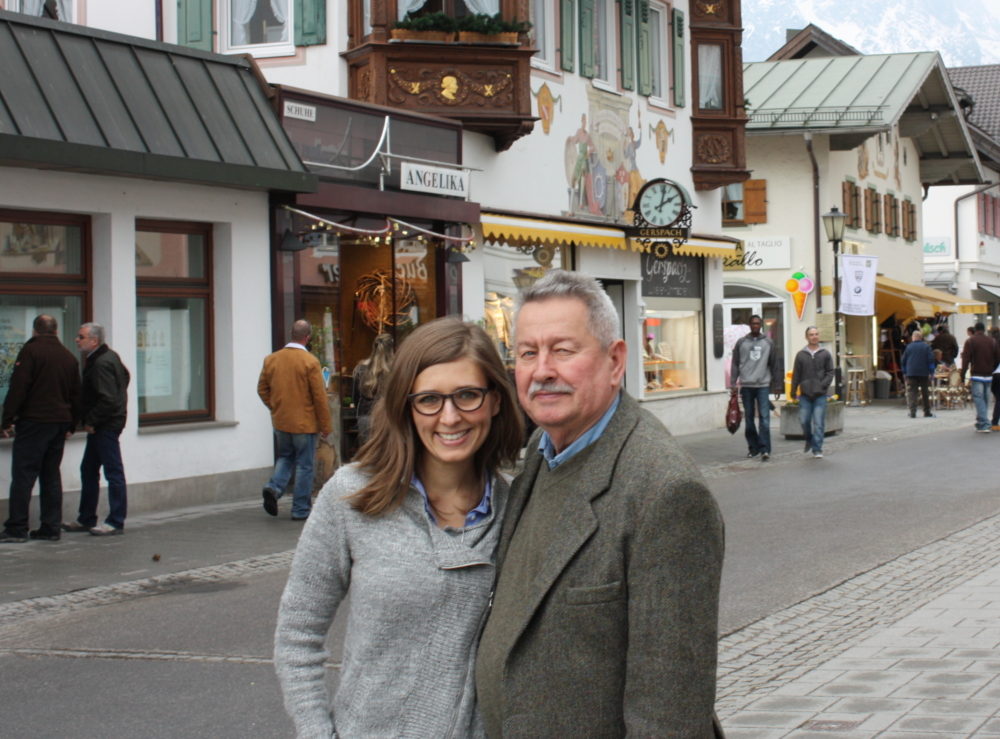 The problem with losing someone who has spent a lifetime on another continent is that the weight of that grief is so inconsistent. You don’t just lose them once. You lose time every time you forget that they are gone, which is often. On Saturday nights, I still find myself double-checking to make sure the ringer on my phone is turned down, remembering my father’s proclivity to call me at 7:00am on Sunday mornings. (“Why the hell are you sleeping?” he would ask, irritated. In reply, I would calmly explain the concept of time zones and weekends to him.) When I realize he will never wake me up at an ungodly hour on a weekend, I break down in tears. It feels like my own muscle memory has betrayed me.

There lies all my hesitation for this trip – I’ll be constantly confronted with the reality that my father is gone, and yet the loss doesn’t begin or end there. It carries on as it always does, popping up when I least expect it. One moment I’m fine, the next I’m not. I go to shut off my phone’s ringer in the middle of the night, and when my husband finds me much later, it is still in my hand.

It’s been years, but it doesn’t matter. Some cuts feels fresh because you’ve just remembered they’re there.