Harvey Weinstein was found guilty today on some (but not all) of the charges brought against him by the state of New York. And I find this unbelievable, not because I believed in his innocence in any measure, but because I believe in the ability – as old as history and time itself – of powerful men to hurt women without consequence. When you’re so used to rape and assault going unchecked, even a partial meting out of justice feels surreal.

I’m angry that he wasn’t found guilty on all the charges.

And at the same time, I can’t believe he was found guilty at all.

As I try to process that news I find myself writing this post, which, as ridiculous as it may sound, is about meatballs. Jesus H. Christ. Meatballs. I don’t know what to do when reality borders parody. I suppose we just lean into it.

Last week, Mike Bloomberg, the former Mayor of New York currently seeking the Democratic nomination for President, took part in his first televised debate. The other candidates, but mostly Elizabeth Warren, Valkyrie warrior and Themysciran Queen, brought up his racist Stop-and-Frisk policy (which actually fucking lowered the graduation rates of black high schoolers where it was enacted. IT LOWERED GRADUATION RATES.), his history of calling women horrific names (like “horse-faced lesbians”), and the NDAs he made women sign in order to quash allegations of sexual harassment. None of this has stopped Bloomberg from running for office. None of it has kept him from the debate stage.

It feels like a weird rerun. The competent woman going after the racist, sexist billionaire, those of us cheering her on wondering if it’ll amount to anything, and fearing that once again, it won’t.

And once again, I find myself making a recipe. Because hours before that debate, Mike Bloomberg’s team – who have spent more than $400 million on campaign ads (because in America wealth doesn’t simply buy you healthcare and criminal immunity) but also political office – released a recipe for meatballs. 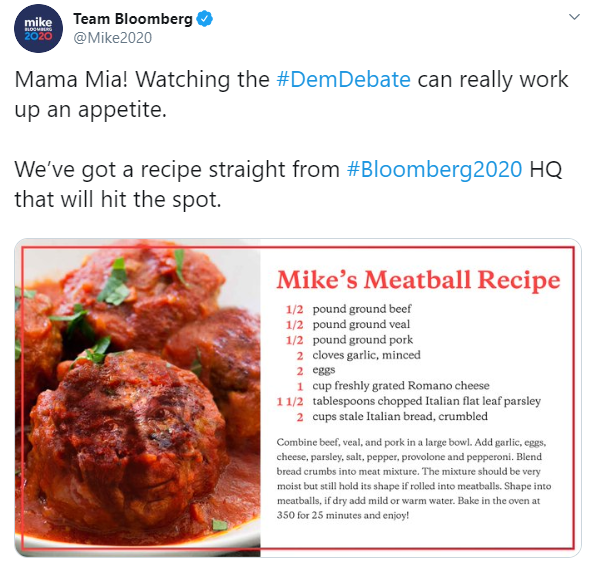 Cool. No one has learned anything.

I’m obviously going to make it.

Let’s ignore the image of the meatballs, on which someone has superimposed Bloomberg’s face, staring at us, his eyes seemingly screaming, “EAT ME.” Let us ignore the fact that the balls are doused in a red sauce, which is entirely absent from the recipe itself. Let’s ignore the fact that, according to one of his employees, Bloomberg once said “I’d like to do that piece of meat” when referring to a woman in his office. 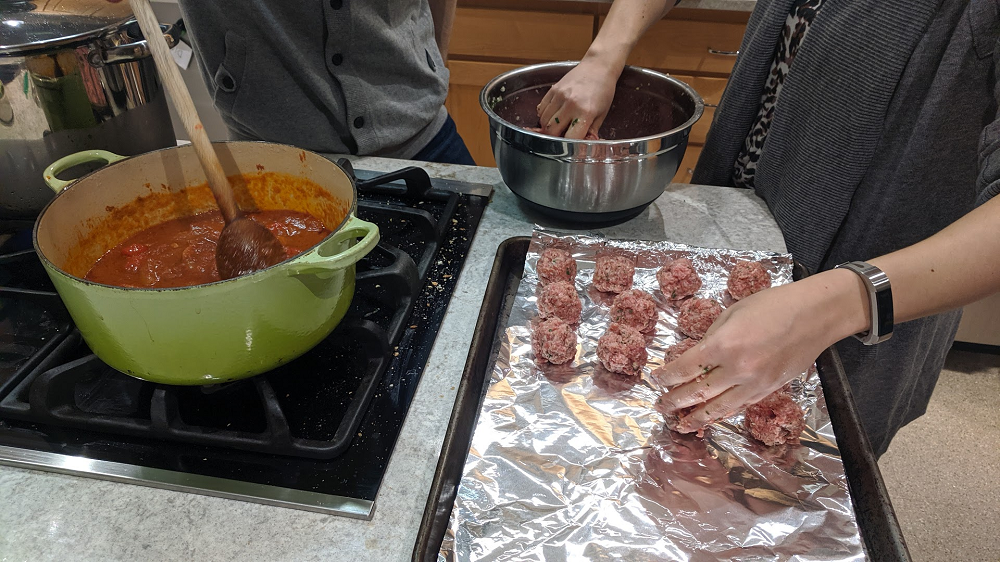 We’re going to pretend these things are normal behavior from a man running for President, because, hell, they sort of are.

And now this man, who is literally a BILLIONAIRE, had his presidential campaign team release a recipe that doesn’t work, presumably to illustrate just how immune he is to the consequences of his actions, big or small.

The second ingredient listed is ground veal. Because that’s the sort of humane recipe component that you’d expect from a man who doesn’t think twice about telling the women in his sales department to blow a male employee as a wedding gift.

Do you know what normal, everyday grocery stores don’t carry? Ground fucking veal. Rand and I went to four different grocery stores looking for ground up baby cows that probably died of loneliness and came up empty. And you know what? Veal is too fucking lean for meatballs, anyway. But of course I still looked.

We went down the ingredient list. The recipe calls for 2 cups of stale Italian bread, crumbled, but the only bread I had was a thing beyond stale. It was so old that we should have rightfully thrown it away, but there’s no such thing as too old when you’re a man running for the office of President.

Rand grated it, and it was so brittle that it flew everywhere, but hey, that’s fine! Make a mess! Maybe someone else will clean it up. (As soon as Stop-and-Frisk ended under Mayor de Blasio, crime rates fell. It’s almost like the policy did the opposite thing it was supposed to do.) 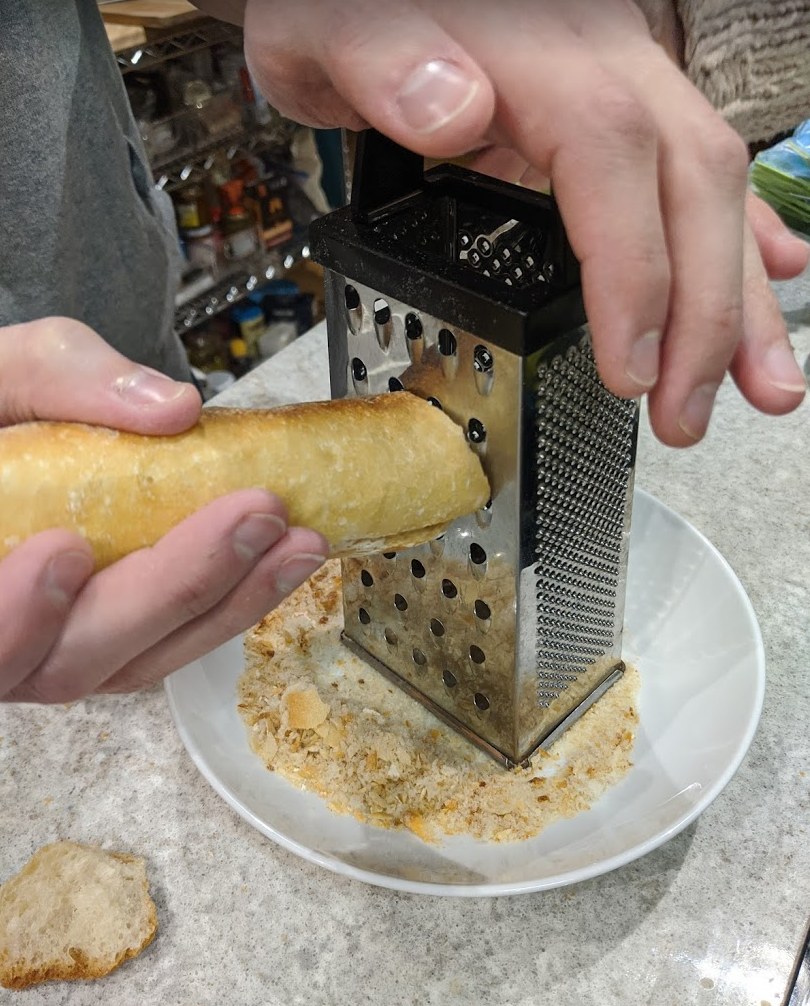 The recipe says to combine the meats in a large bowl, then add garlic, eggs, cheese, parsley, an unspecified amount of salt and pepper, and … provolone and pepperoni? 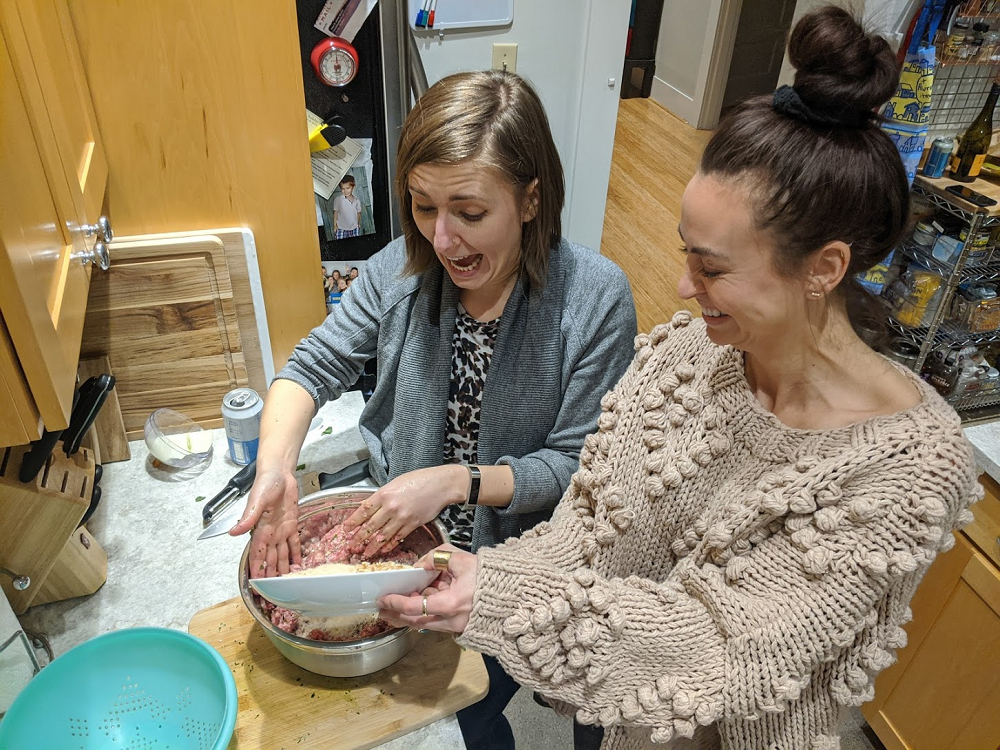 Get your friend to help. Pay her for her work in meatballs as a metaphor for the under-compensation of women everywhere.

Those two things weren’t on the ingredient list. It’s like the top half of the recipe was forced to sign an NDA where it couldn’t mention the provolone and the pepperoni, and then the instructions just blurted them out.

And at that point, dear readers, I realized how fucking tired I was. Tired of listening to rich, powerful men tell me how things are, when I know they’re wrong. And Bloomberg’s recipe is so very wrong that it doesn’t even make sense. A lot of the time, we just have to go along with it, because when everyone keeps legitimizing someone, when everyone keeps insisting that this person obviously knows what they’re doing, you start to think that maybe you’re the one who doesn’t know how to make meatballs, even though you’ve known since you were small, since before you knew the English word for meatballs.

Oh my god, even these analogies are stupid. I hate all of this. I’m not going to complain about the unexpected glory of my career, but what does it say about the world that I can make a name for myself critiquing the recipes of sexual harassing dipshits? THIS SHOULD NOT BE ANYONE’S JOB. THIS IS FUCKING RIDICULOUS. But here I am, making another fucking shit recipe because Mike Bloomberg has enough money to buy a metric ton of memes and commercials that play every 45 seconds in the hopes we’ll forget that he’s a racist sexist asshole.

“Hand me an onion,” I told my husband.

“Is there an onion in the recipe?” 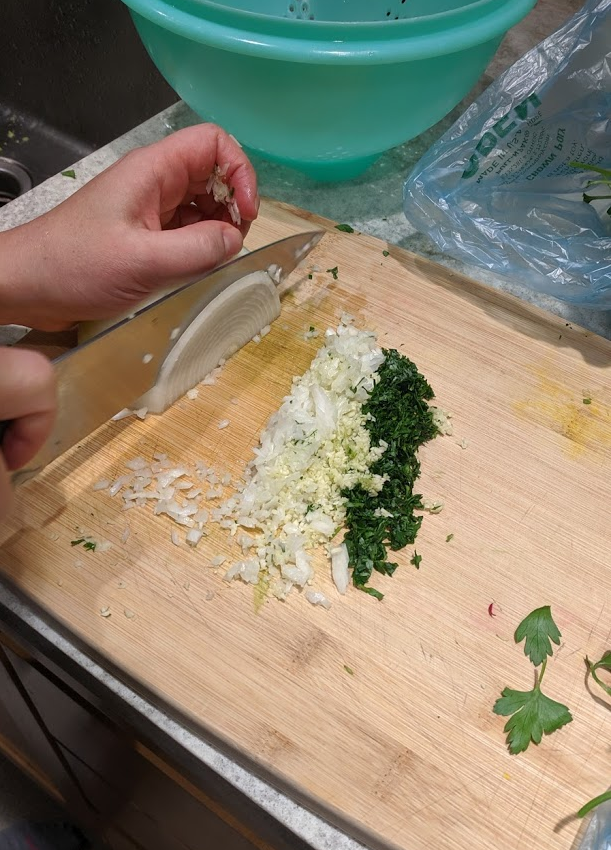 I asked for more garlic. Rand suggested we throw in another egg, so we did. And more parsley. And a splash of milk. 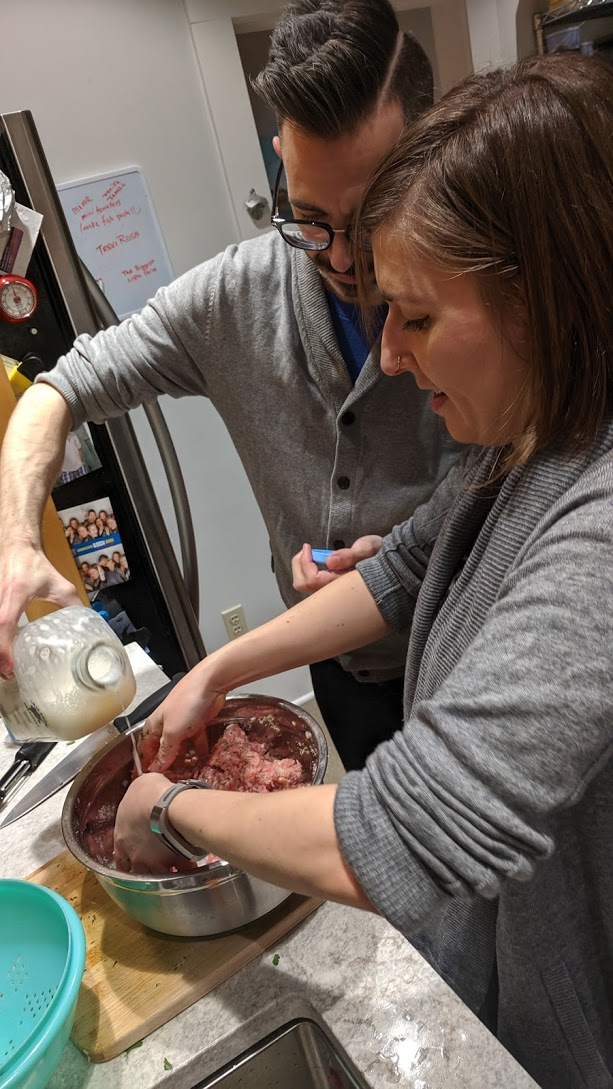 Rand threw salt in – grains falling from his fingers like sand. He knew exactly how much to add. There are no shortcuts to that – it’s something that comes from experience, from making a recipe so many times you don’t even think twice about something as critical as salt.

And god, it’s so nice to know I can trust him with things like that. Things that seem small but are so, so important. 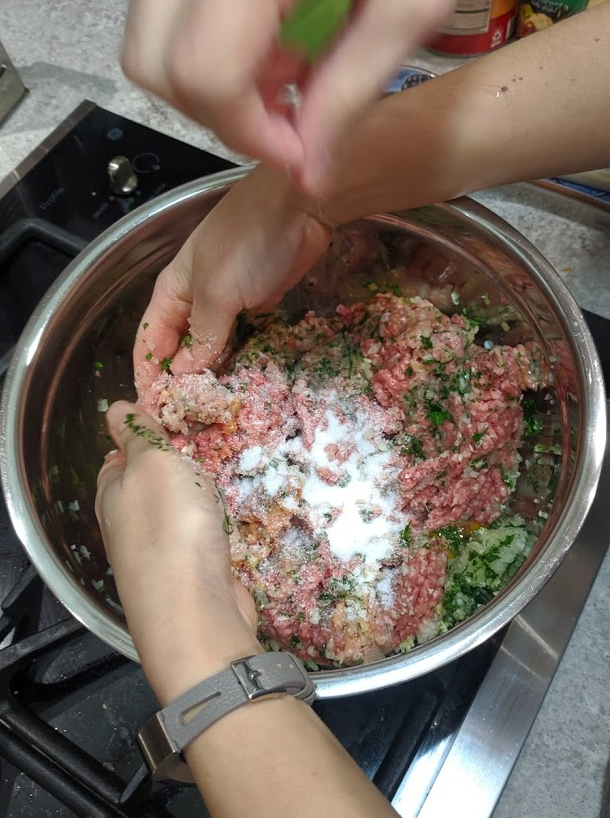 “This is going to be the best thing to come out of Bloomberg’s candidacy,” he said, smiling.

He made a red sauce – the one absent from the recipe – slow-cooking an entire half onion and whole cloves of garlic in tomato sauce until they fell apart. He broiled the meatballs instead of baking them, so the tops got crisp and brown,  and he swept up the crumbs from the bread he’d grated. I thought about what it means to have a partner who make things easier. Who cooks for you and runs to the grocery store when you are too tired and who cleans up the kitchen and reminds you, time and again, that everything he has is yours, too. 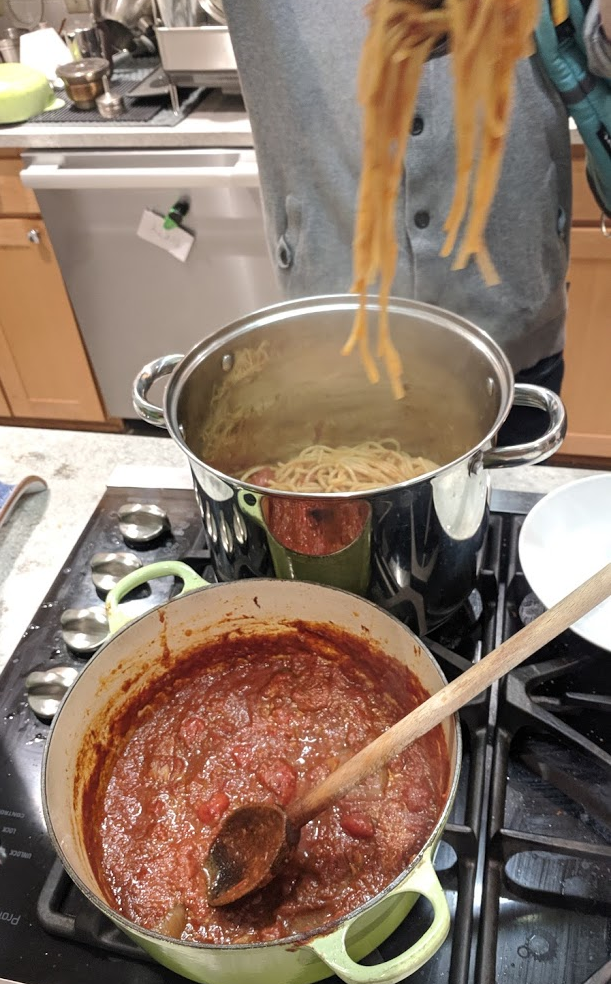 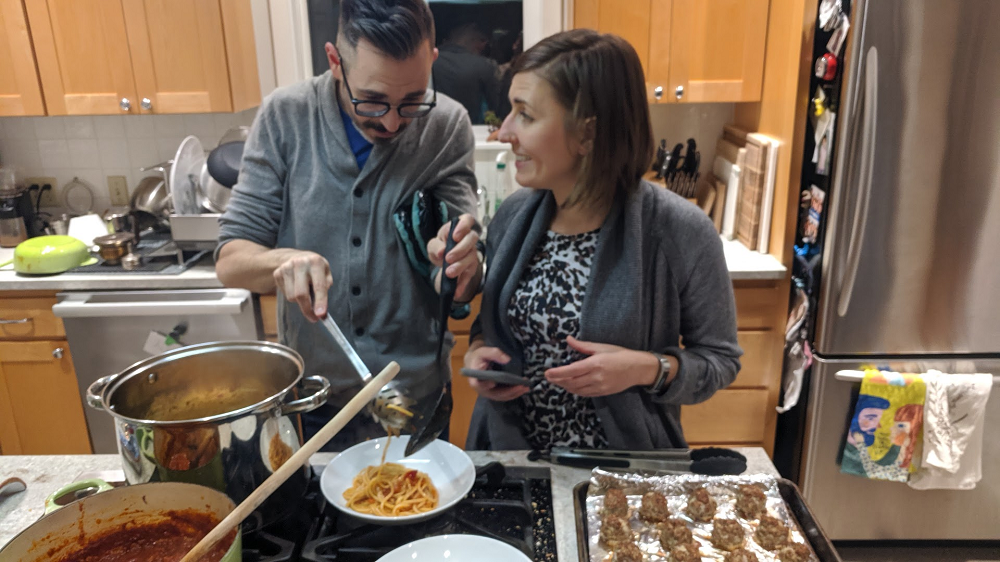 My mother ate dinner with us. When we told her what recipe we’d started with, she almost walked away from the table, hands fluttering up, the sort of indignation that can only happen if your mother is Italian and she’s been offended both culinarily and politically.

Big thanks to our friend B for taking many of the pictures in this post. <3