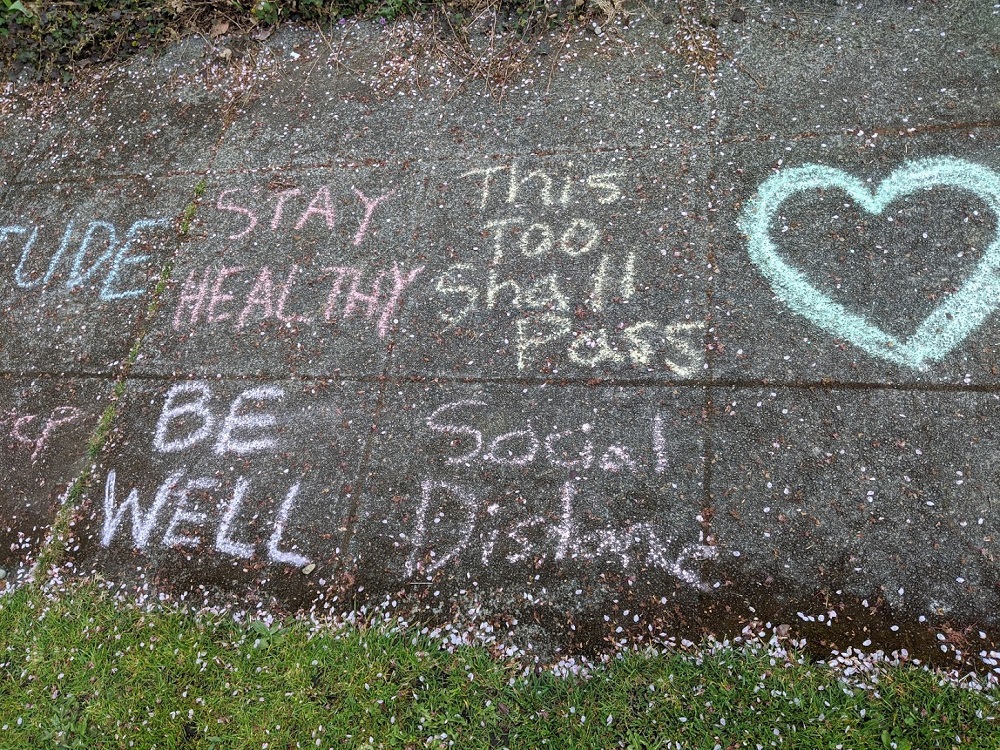 Social isolation has sort of felt like a break-up – a sensation that, after nearly 20 years with my husband, returns to me like a hazy, rotten memory. “Oh, this,” I think, as I pull myself out of bed, forgetting what day it is, and mash an OREO into my maw. “I remember this. It sucks.”

I haven’t left the house in several days. I was taking walks around my neighborhood, dutifully watching my heart rate go up, lauding myself for being so responsible, even in these strange times, but I stopped. My enthusiasm for my own-well being waned. And besides, staying at home, staring blankly at my TV is good for my own well-being, I’m told. It’s good for everyone’s well-being. So I stopped walking. I was literally going nowhere, anyway – just circling the block until I started to memorize houses, like a conspicuous burglar. I had been occasionally going to the grocery store, looking forward the to the errand with a weird sort of zeal usually found in dogs about to go on walks, but that started to prove too stressful. Other shoppers seem unwilling to observe the 19-foot cone of distance I was comfortable with. One guy cut in line in front of me because I’d left too much space between myself and the shopper ahead of me. I pointed this out to him. He didn’t care and held firm to his spot.

I wanted to scream at him. Everywhere I went, it felt like the air was thick and staticky with someone about to snap. Why couldn’t that someone be me?

I’d come home in a cold sweat, would frantically wipe down all of my groceries, stopping short of washing my vegetables with soap (that was a bridge too far – and wholly unnecessary, as it turns out). But the entire exercise has proven too stressful, so instead I’ve opted to just stay inside. I am all caught up on laundry. I am finally getting around to reading that book I said I was going to read. Rand and I cook, or we order take-out. Sometimes, if I ignore the details (the wiping down of the to-go containers, the never-ending stream of terrible news on my phone) it almost feels normal.

“It’s fine if I stay in the house,” Rand told me. “It’s when I go outside that everything feels apocalyptic.”

He has started rewatching Community. I remember him loving it the first time around. I watched a couple episodes with him, feeling nostalgic for an epoch that seemed to have just happened.

I started sobbing at a character’s final farewell, and Rand looked at me in a mix of confusion and disbelief. I’d seen the episode before. It’s not like any of it was a surprise.

“You’re upset because Donald Glover is leaving?” he said, incredulously. “He goes on to do great stuff.” (He does.)

“No,” I told him through gulps of air. “But I miss the time when this show made sense. I miss Obama. I miss the world when it wasn’t broken.”

And he hugged me and I cried and said something about missing haircuts and hugging people and grocery stores. I miss people not dying by the thousands. I miss a lot of fucking things, big and small, insignificant and not. I miss feeling hopeful. I don’t fucking remember the last time I felt that way, but I’m certain it was sometime during the course of this fucking TV show, a show which felt absurdly dated because it showed people going outside and touching one another.

The thing is, if you don’t try to do any of those things, you almost feel normal. It’s like  – forgive me, I’ve been stuck inside for only a few fucking weeks but here I am quoting Anna Karenina, my god – it’s like when Tolstoy wrote how someone can sit still for a huge stretch of time without any problem at all, but if you tell them that they have to stay still, they won’t be able to do it. I’m sure before all of this there were plenty of days when I didn’t see my friends or hug anyone but my husband or go outside. But now that I can’t? God. Now that I can’t – it’s all I think about. And maybe that’s why it’s easier to stay indoors – to avoid the grocery store altogether.

A friend of mine noted that he changed from his day pajamas to his night pajamas and I laughed, having done the same thing. Another noted that she had no idea – like, not even a vague inkling – of what day it was.

“Yes, yes,” I thought, feeling a sort of pride that I knew so well what they were talking about. I remember what my friend Mindy told me back when I had my brain surgery, something that comes to mind again and again:

“One day, all of this will just be a weird memory.”

Right. Right. The present eventually fades. It does. Heartache goes away. The world feels broken right now, none of it makes sense, and eventually this becomes a weird point in the past. We’ll go out. We’ll go to restaurants again. And theaters. We’ll see friends. We’ll hug one another.

Remember that time we all had to stay indoors and everything was broken?

Yes, yes. I remember. That sucked. Anyway, we’d better get our food order in, or we’ll miss the movie.