I’ve recently finished watched all ten seasons of Letterkenny – the Canadian cult comedy now available in its entirety on Hulu – a feat which is less impressive than it sounds, as each is a mere seven episodes long. Still, this required a measure of commitment from an American West Coaster, to sit through those early episodes, occasionally with the captions turned on. The humor of the show – which follows the travails of various stratified groups within the town (the hicks, the hockey players, the Mennonites, and the “skids” – the meth-head social misfits who dance outside the local convenience store) is not just Canadian, but highly specific to the eastern provinces and to the Ottawa Valley. According to my highly scientific Twitter research, the show is laser-accurate in its depiction of the region and the archetypes within. A friend who went to university in the area told me that every single character was a version of his friends at that tender age (two of them, remarkably, even sharing names with the show’s inseparable and vacuous hockey players). The stereotypes, I am told, are spot-on, a sort of pastiche that manages to capture reality better than reality itself.

As an outsider, looking in, appreciating the humor of the show is akin to learning a new language. Sometimes this borders on the literal – I have a Letterkenny glossary open on my phone, to decipher the slang that peppers every exchange. After so many seasons, I’m able to translate the humor, but not understand it fully. It is an inside joke that has been explained to me. I chuckle because I know the origins, but not because I’ve experienced them. But there is something about the show that rises above the provincial humor – some part of the patois that appeals to the wider circle of pop culture … I think. Because I’ve kept watching, even as an outsider.

In an exercise that has become almost philosophical, I find myself asking the same question again and again: is Letterkenny actually good? Can it appeal to a broader audience? The answer is, definitively, yes and no and I have no idea.

Because the show is – when placed in the vacuum of not understanding its deep-cut social commentary – an exercise in contradictions. It is both bingeable and barely watchable, clever and asinine, surprisingly progressive and appallingly, horrifically not, all at once. The show’s moral agents regularly engage in violent brawls (I have searched my soul relentlessly as beer bottles shatter on the back of heads, and still, I have no idea what I want the outcome of those altercations to be). The acting (if it can be called that) is so, so bad, and yet there are performances which cannot be improved upon – they are a peculiar sort of perfection. There is whip-smart dialogue delivered by actors who barely enunciate, so that much of it is garbled entirely. There is no plot to speak of, and the rare time that pivotal action does occur, it happens off camera, so I found myself wondering if I’d missed an episode. I hadn’t. It is merely that key conflicts and resolutions often happen off-screen, and we only learn about them later. The show’s approach to storytelling is either completely broken or just borderline Shakespearean. The Canadian broadcast television equivalent of  Exit, pursued by a bear, of a messenger arriving last minute to tell us that the evil Duke has been captured and that the once-doomed nuptials are back on.

There are brief moments of surprising tenderness, and one wonders if they stand out merely because of contrast. This moment, where Squirrely Dan reconnects with an old crush from his adolescence, is stunningly sweet. 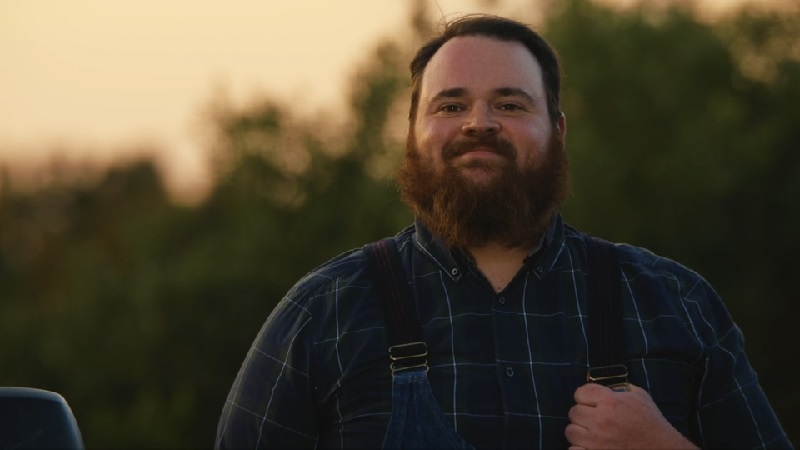 It’s also at the end of an episode full of so many dick puns that I legitimately lost track of them all.

Another time, a character’s hair cut was such an unexpected reveal that I literally gasped. And that’s when I realized something was at play. That after so many episodes, I had not assimilated to life in rural Ontario, but I had assimilated to Letterkenny itself. That I’d become familiar with the quirks of life in this particular small town; with a bar that constantly burns down, with the local town beauty that everyone pines for (“Bonnie McMurray!“), with the auctioneer that is just shy of seven-feet-tall. My favorites emerge. Roald, one of the drug-addled skids, who perpetually wears black overalls and skuttles around like an underfed racoon, giant-eyed and desperate. He occasionally tries to lead his friends on the right path, like a methed-up Frodo. Gail, the raunchy local bartender who communicates partially in pelvic thrusts. A brief glance online tells me that there is a large subset of male Letterkenny fans who hurl misogynistic garbage at her for the same reasons that I adore her: she is unapologetically sexual, she gives zero fucks, and through ten seasons, she refuses to smile. (Lisa Codrington plays her with a hip-swaggering confidence we rarely see in women on television, moving her long limbs with a languid, almost serpentine quality. She hurls the same sexual aggression that women have been dealing with for millennia back at the men who usually wield it, and it is a painful sort of poetry.)

There’s Tanis, the foul-mouthed powerhouse of the local native community, who occasionally sports a hickey like a badge of honor and responds to most inquiries with a smirk and a shrug. She alternates between flirtatious and utterly bored, like Mae West if she spoke Mohawk. And the aforementioned Squirrely Dan – the town’s moral philosopher, who is often quoting Professor Tricia of his Women’s Studies class, and delivered a delightful if ultimately sacrilegious explanation of the first Easter.

I found myself returning to show, if, for nothing else, to see these familiar faces, drawn by the tug of a small town that I’ve never known. This might be the show’s greatest triumph: that it turns you from an outsider to almost a local. I find myself using the catchphrases without meaning to, find myself tapping a glass on the bar twice. Rand and I were talking, and one of us said “to be fair” – which resulted in a chorus of “to be faaaairs” and both of us laughing – a quirk of the show I cannot explain the appeal of, even now. The wordplay is infectious – it works its way into your every day like an accent, one that’s near-impossible to lose.

I get the distinct impression – watching the cast, members of all the disparate groups, the skids and the hockey players and the hicks, climbing into a pickup truck – that filming an episode of Letterkenny may be occasionally more fun than actually watching an episode. But there is nevertheless joy in getting a glimpse of dysfunctional town that still looks out for itself, of thinking you might get to be a part of it. Stewart may shriek, and McMurray will say something horrifically misogynistic, and Shoresy will implore us to give our balls a tug – but if a brawl erupts with the degens from upcountry, they will have your back. And perhaps that is the prevailing lesson of Letterkenny: that here, no one hurts you but us.