and filing bankruptcy isn’t one of them! YUK YUK YUK!

Err … sorry. Clearly the promise I made on Monday is getting to me, and I’m already starting to crack under pressure. And really, I shouldn’t be so hard on Norway for being so obscenely expensive. Because even though food and shopping are completely out of the picture (and honestly, how can they expect a girl to live?), the museums and parks are really quite reasonably priced, or even free if you purchase an Oslo Pass.

Oslo Passes are available all over the place, and you can get them for 24, 36, or 48 hours. The 24-hour pass is cheapest, obviously, but the problem is that there are only so many museums you can see in one day. Of course, the expiration time is written in pen, so if you wanted to be dishonest, you could easily change the time on your Oslo pass.

I COMPLETELY DO NOT ENDORSE DISHONESTY OF THIS NATURE. I mean, just because Oslo is ridiculously expensive, and you’ve spent tons of money there, and Norway is one of the richest countries in the world does not give you the right to commit fraud by extending the validity of your Oslo pass for a measly 5 hours. No. Absolutely not.

But hypothetically, if you wanted to do that, it would be really easy. 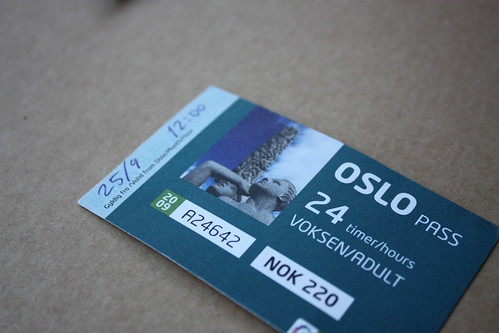 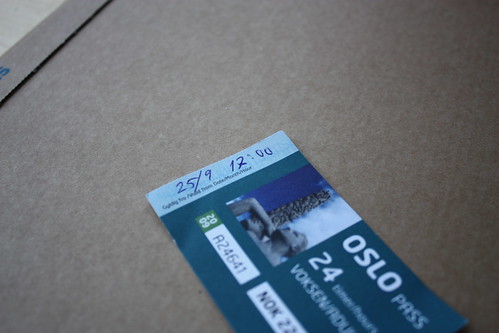 Exhibit B: Oslo pass made into a whorish lie.

A 2 turns into a 7 with just the addition of one little line. Of course, all of this is for demonstrative purposes, only. And clearly, since karma doesn’t exist, it’s not like the people who do these sorts of heinous things incur the wrath of the Norse gods, causing the housekeeping staff to throw out your souvenirs. No. That wouldn’t happen.

So let’s just focus on some of the things you can do around Norway, some of them free, and some of them made much more affordable (or even free) by the use of your totally legitimate and not-at-all-forged Oslo Pass.

I’m not going to lie: when we got to the Fram, I was half-awake, completely jet-lagged, and not entirely sure what was going on. Most of the signs were in Norweigan, which didn’t help. I should have probably done some research before, but, you know … new episode of Mad Men was on. Anywho, according to Wikipedia (which means it has an accuracy rate of over 35%!) the Fram was a ship used in expeditions to the Arctic and Antarctic by a handful of Norweigan explorers (most notably Roald Amundsen’s trip to the South Pole) in the late 1800s / early 1900s.

But who cares about that when the entrance to the place is loaded with taxidermied polar bears? 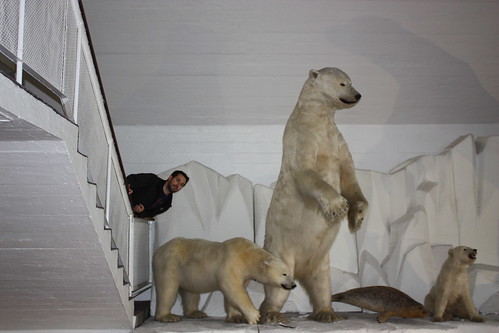 Oh, and the museum itself holds the Fram. The entire thing. A boat! Indoors! If there’s one thing I learned about Scandanavia, it’s that people there loooove putting whole boats in museums. Yup, that’s right: I’m stereotyping. NORWEIGANS LIKE BOATS IN THEIR MUSEUMS. Scandalous, I know. 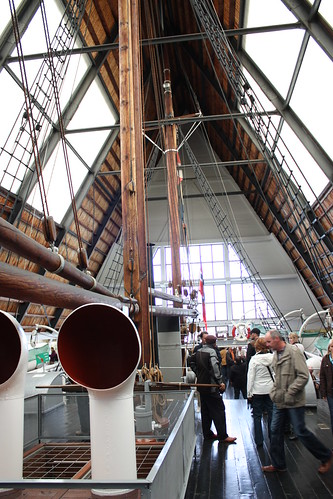 You get to walk right onto the ship, which I loved (it felt like something you shouldn’t be allowed to do). And you get to explore the lower decks. Of course, you should be respectful in doing so. I mean, you wouldn’t want to make a mockery of an important part of history, by, say, sitting at the dinner table and demanding food, right? 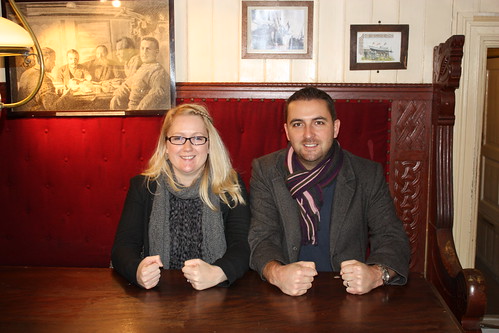 I heart Lisa and John.

No. Of course not.

My third-grader teacher sucked (this has relevance, I promise). She was the sort of person who reveled in your failures, who loved it when she could prove the smart kids wrong. She was the sort of thirty-something-woman who would compete with an 8-year-old. Why she decided to be a teacher, I do not know.

I think it was in her class that we studied the Kon-Tiki, though I’m not entirely sure. At any rate, I attribute it to her class, and I take some special happiness in knowing that I’ve been there, while she probably still has that terrible haircut.

She was in the back of my head as I went through the museum. And as I much as I disliked her, I loved the museum. I suspect the two might be related. But let’s leave that be.

The Kon-Tiki museum hosts both the Kon-Tiki and the Ra, two ships used by explorer Thor Hyerdahl. Hyerdahl’s goal was to prove that ancient cultures had been able to settle and populate far off lands. He did this by traveling across huge expanses of ocean in “primitive-style boats”. The whole story is fascinating, and I’m not doing it justice. Plus, the museum features lots of photos and videos of young, suntanned, shirtless Norweigan men in boats. I love history. 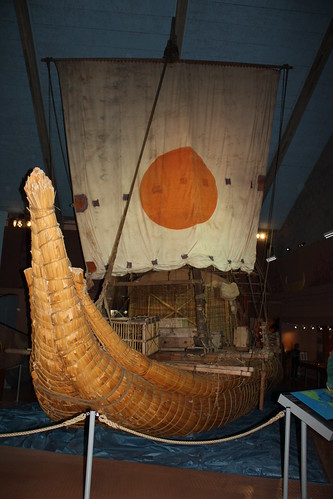 The Ra. I pretty much freaked when I saw this. 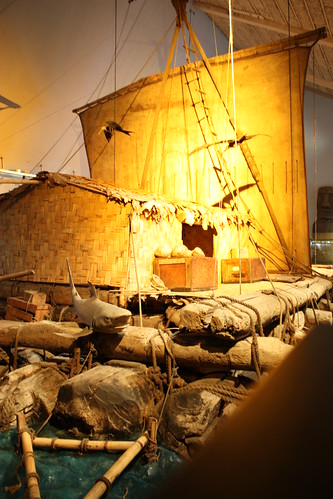 The Kon-Tiki (I freaked out less here, because I had thought that the Ra was the Kon-Tiki and had already exhausted my energy reserves).

Oh, and there was a documentary about the voyage of the Kon-Tiki, which won an Oscar in 1951. So the museum has the Oscar on display. 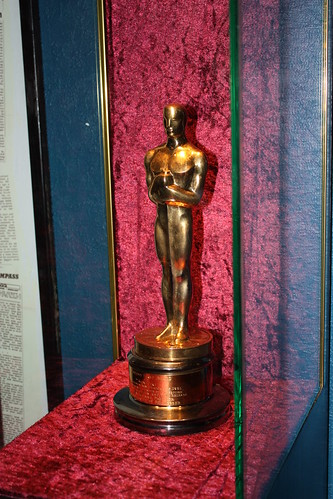 Apparently they won't let you hold it. Which is fine. It's not like I had a speech planned or anything ... sniffle.

Remember how I said those wacky Scandanavians love putting boats in museums? The Viking Ship Museum, is, perhaps not too shockingly, no exception. The museum itself was vast and kind of sparse, which made for a really lovely layout, and also meant that we didn’t need to spend 3 hours looking around (which was good, because I was kind of museumed-out by this point). 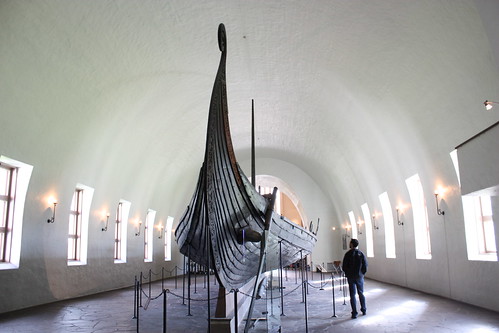 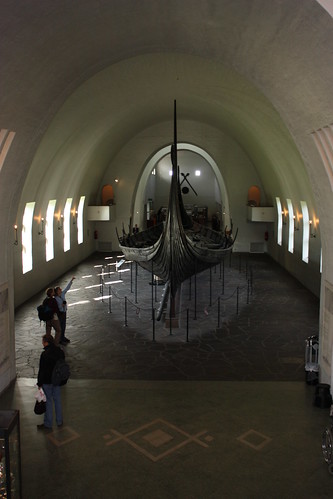 The whole thing is quite beautiful and peaceful, and makes you wonder if the Vikings really were violent pillagers, or if they just had bad PR. 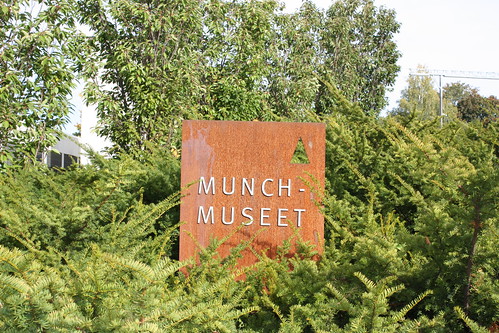 Interestingly, we thought the correct way to pronounce Edvard’s last name was “moonk” but everone in Norway said “moonch”. Unless it is a widespread practical joke, I’d say the latter is correct. Obviously, I didn’t take any photos of the inside of the museum, but suffice to say: Munch had some serious issues about women.

The museum features a ton of Munch’s work, including the newly recovered “The Scream” and “Madonna” which were stolen in 2004 (on a semi-unrelated note, I had prints of both of these on my wall in high school. Sooooo over-dramatic, I was).  Apparently two guys walked into the museum with guns, and walked out with the two paintings. That was it. Security has improved a bit, and some of Munch’s more famous works are now under bullet-proof glass. The museum is also moving to a more secure building which is currently being built. Which is probably a good thing, because this is how they store the extra paintings that aren’t currently on display: 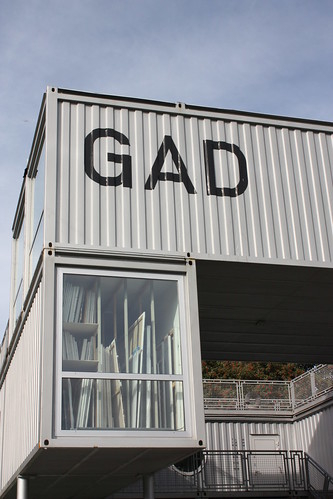 Dear Norway: When it comes to preserving your national treasures, please stop taking a page from the Italians.

If you have time (and we had plenty the first day we tried to go, since the museum was closed) I recommend walking around the adjacent park. While the botanical diversity isn’t great (“Quick, what grows outside in freezing cold, wet temperatures? No … we’ve already got moss.”), it’s pretty, and you can spot some of the buildings from Munch’s landscapes and garden scenes. 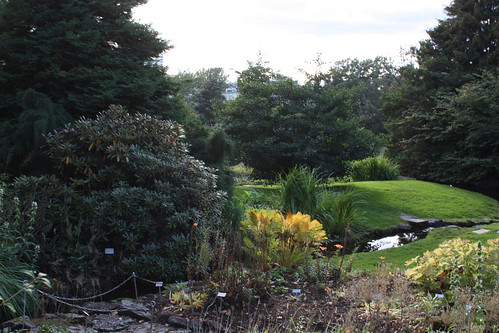 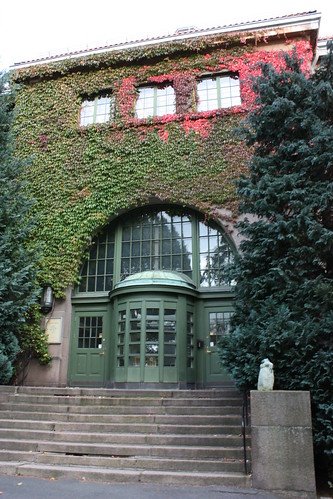 This was the subject of one of Munch's less devastatingly depressing paintings.

Our Fjord tour was better than most for 2 reasons: 1.) It was a fantastically beautiful day and 2.) we had the joy of sitting behind a crazy drunk lady who was trying to mack on a German kid 30 years her junior. This made things endlessly entertaining. Otherwise, the hour and half long tour might have been a little dull. Still, if you like fjords, and you just want to sit down and veg out for a little while, it’s definitely worth it (and really, who doesn’t like fjords and vegging out?). 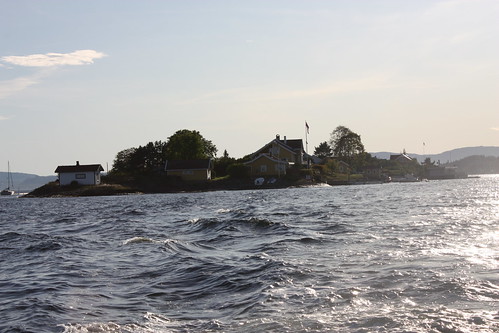 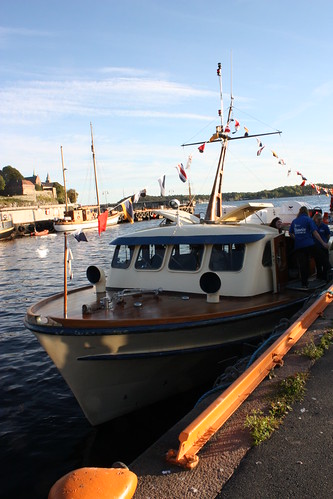 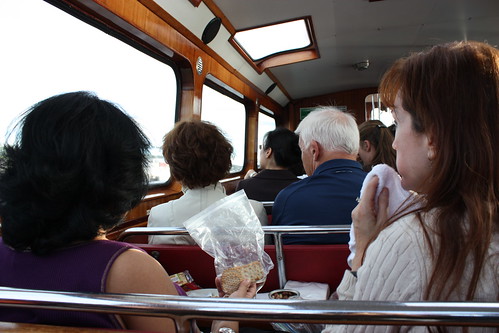 Annoying drunk lady, at left. She later swapped seats with her friend and proceeded to grab the knee of some poor German kid. It was awesome.

If you want to see some beautiful, but still sort of weird and occasionally disturbing art, you should definitely spend some time here. There’s lots of angry baby statues, as well as statues of babies attacking men. Personally, I was just happy to see that someone else has recognized how dangerous and predatory babies can be. Rand was pretty disappointed that the park didn’t feature frogs, as the name sort of (but not really) suggests. 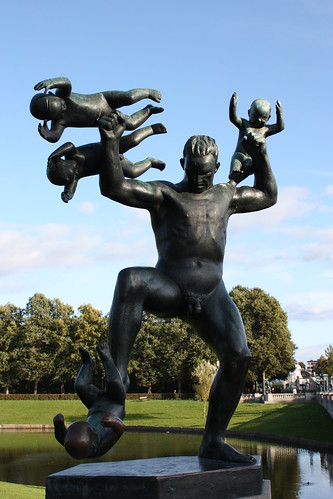 "Gah! They're all over the place." 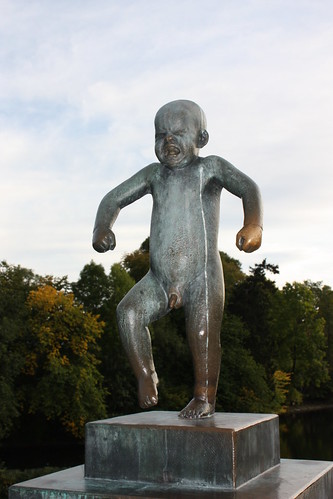 The Oslo Opera House (free to explore outside, roof, and lobby)

I am pleased to announce Oslo’s opera house is very nearly as awesome as Sydney’s (because, let’s face it: Sydney was getting a little snooty about it). Besides, I got some wicked food poisoning from the Sydney Opera House restaurant (which, weirdly enough, I hope impresses you). You have to pay for tickets to see a show, but you can take a peek inside and roam all around the outside (and even on the roof). 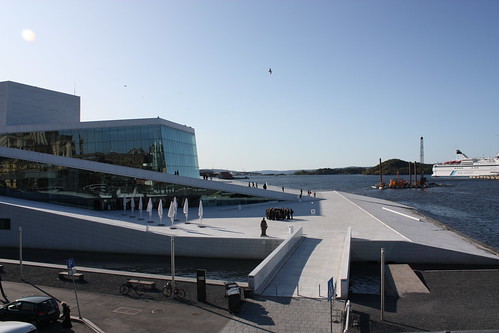 The view is fantastic, but on a sunny day, the blinding white building reflects a lot of sun, making it hard to see. Or it could be the sunlight bouncing off the heads of 4 million blond heads. Either way. 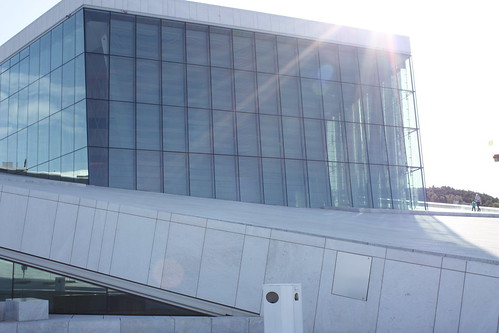 It's either sunlight, or Torvald.

If you want to tour the inside of the royal palace, there’s a one hour tour that’s about $15 (reservations are required). Or you can look at the outside (and see the daily changing of the guards) for free (though I don’t really know how they could charge for looking at the outside of something. But I’m sure Disney is working on it for Times Square). We didn’t actually stick around for the changing of the guards, because we were somewhere between “very tired” and “thinking we’re some sort of hummingbird” tired. Here’s Rand yawning in front of the palace: 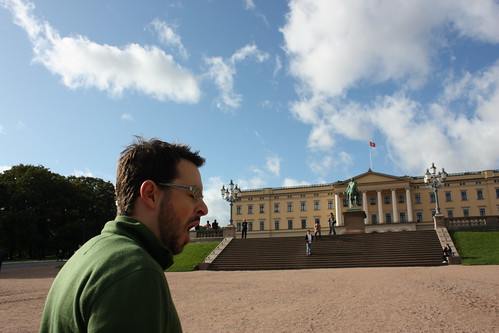 The Giant Pointing Finger Statue can be found in Oslo’s old town of Christiania Torv, in the middle of what appears to be a beautiful cobblestone pedestrian square. It appears to be a pedestrian square, but believe me: it is not. Though there are people milling about, and even eating on outside at the edge of the square, you’ll find it is actually quite an active vehicle thoroughfare.

Just seems like the sort of thing you’d want to know. You know, in case you don’t want to be run over.

The statue itself points to the spot where King Olaf the Blond decided to rebuild the town after it was burned to the ground by trolls in 1973. Or something. 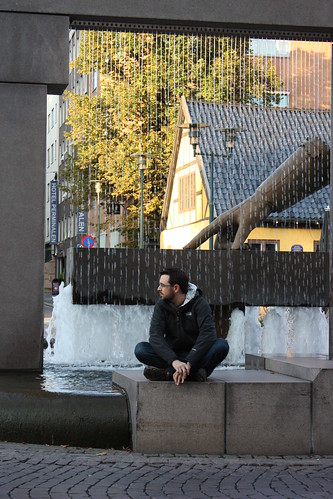 We didn’t actually get a chance to stop by the National Museum, which I think is forgiveable considering that we saw a hell of a lot in Oslo. It’s definitely worth a stop, from what I hear, and a lot of worth-seeing paintings (including a large collection by Munch) are located here. I don’t have a picture of the exterior, so here’s a photo of an establishment we thought sounded dirty: 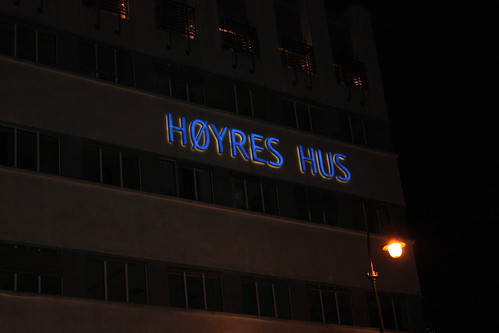 What? I’m tired, and this post has taking me forever to write. Leave me alone.

Okay, that’s it. Ten (though really it’s probably only eight and a half) things that you should absolutely do in Oslo. Some free, and some nearly free after using your completely legitimate Oslo Pass. Ahem. Yeah.