Please excuse me if I am a bit more frugal than normal for the next few weeks. If I start frantically clipping coupons and hoarding pennies, do not be surprised. If I pass out, please get me a cookie, as it means I have sold too much plasma.

While we were there, we found that Oslo had dethroned London as the most expensive city in the world, which isn’t all that surprising. By comparison, London seems downright reasonable. New York seems dirt cheap. I haven’t noted too many specific restaurants, because really, it’s a crapshoot. But hey – you don’t go to Norway (or anywhere in Scandanavia) for the cuisine.

Here’s a rundown of some of the meals we had, and their prices. Try not to let your mouth hang open like a trout. Because I did that, and apparently it’s not a good look.

Breakfast at the Grims Grenka Hotel:

Mercifully, breakfast was included with our room. I won’t lie: we gorged ourselves. I’m a sucker for free food, I love buffets, and if there’s a chance that I can save a buck by eating a huge breakfast and skipping lunch, I will do it. Some might think this makes me cheap. And they’d be right. But it also makes me smart. Sadly, there are no photos because in the wee small hours of the morning, I can barely be expected to put on pants, much less remember to bring my camera. Needless to say, chocolate croissants are good hangover food. Pickled herring is not.

I don’t really remember this meal, because it occurred about an hour after we landed, and my brain was pretty sure it was still yesterday. I remember it being okay – overladen with salt, frozen vegetables, and too much sauce – but definitely edible. Rand hated it. I got some sort of Thai curry (I think), and Rand got stir-fry. That was it. No apps. No drinks. The bill came to around $80. 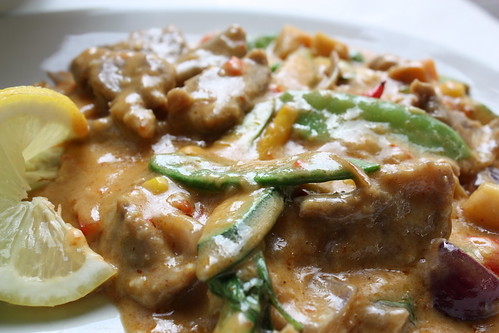 There was frozen corn in it. 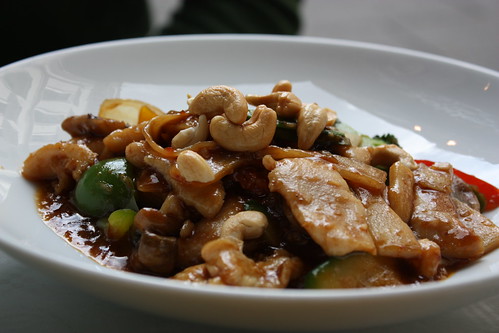 Rand said it was overly salty, but it might have been seasoned by his own tears. 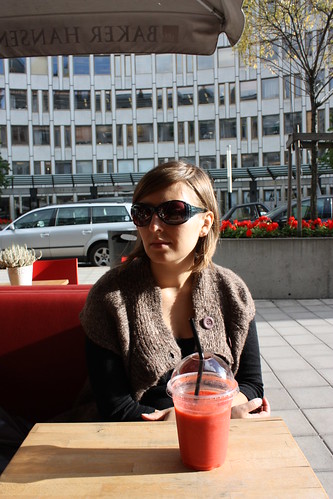 This place was actually pretty nice. I would skip any of the small plates or appetizers (one slice of eggplant set us back about $6), and go for the pasta dishes. Still expensive – about $20 – $25 for a single-person bowl, this was a lot more reasonable than most places we found. Plus, the food was tasty and the staff friendly. 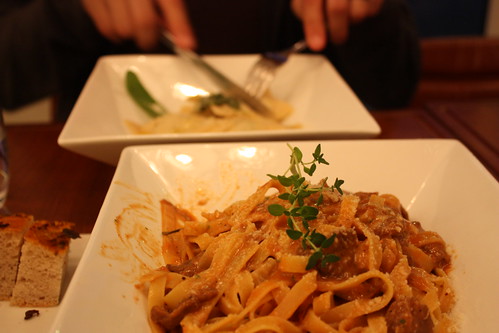 Italian restaurant across from the Grims Grenka Hotel, Oslo: 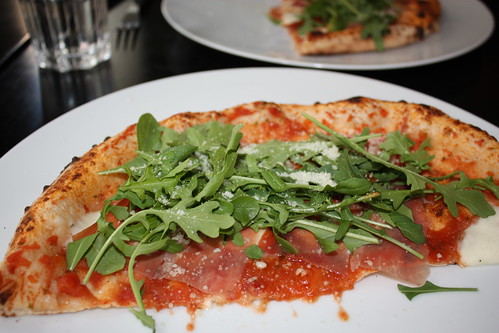 I looked positively everywhere for the name of this place, with no luck. It was literally just across the street from the front entrance of Grims Grenka. It, too, was pretty reasonable by Oslo standards. So, you know, still crazy expensive (about $25- $30 for an individual pizza). Note that Rand and I split the pizza, which raised a few eyebrows.

The food was good, but, again, I thought it was a wee bit salty. At this point, I started to get nervous, because I love salt and nothing ever tastes too salty for me, but this was the SECOND TIME in just a few days that things tasted that way. Doing a search for “everything tastes salty symptom” did not help assuage my fears. But hey, Norway has free medical, so if you’re ever going to have a hypochodriacal attack, that’s the time.

6 courses of magic, wine pairings, and an amazing view. This place was simply stunning, and entirely unaffordable. Fortunately, the conference organizers graciously hosted dinner, so we didn’t have to sell a kidney in order to eat here (p.s.- black-market kidneys are worth waaaay less in countries where medical is free. Or so I suspect. It’s not like I checked. I was simply taking that sample of my husband’s blood out of intellectual curiousity …). 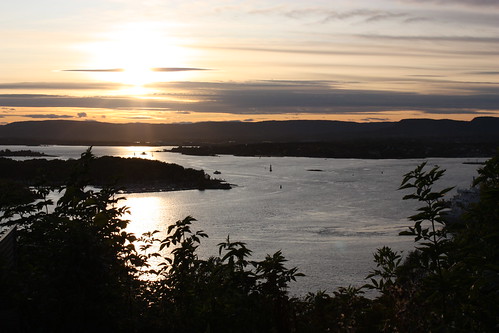 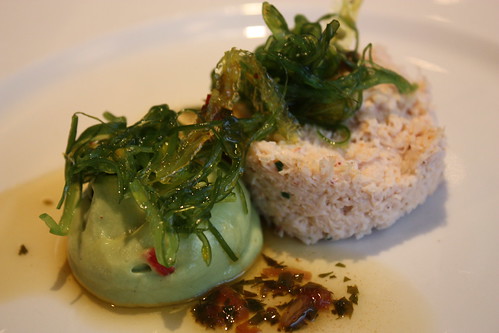 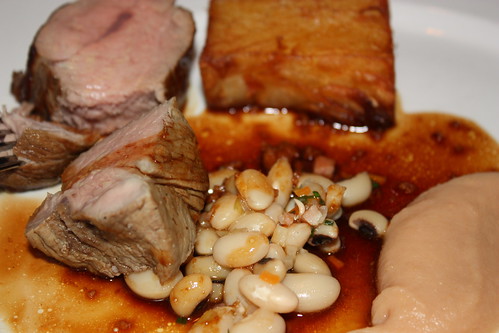 Of course, for those of use who had been subsiding on nothing but leftover trail mix, smoothies, and the occasional rogue herring, this sudden influx of sustenance and wine might have proved a bit too much. And some of us may have fallen asleep on someone else’s arm. Making it rather difficult to take a picture of the scene. Difficult, but not impossible: 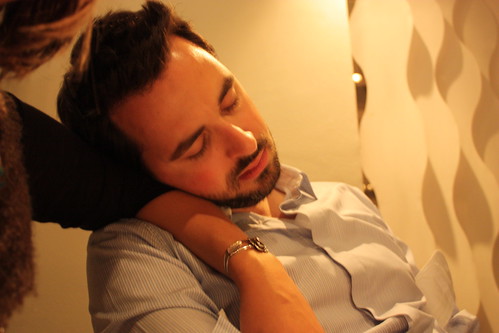 How shocked are you that this isn’t a photo of me sleeping?

The Finstua Restaurant, also located here, could likely only be afforded by successful business men like Warren Buffett or Scrooge McDuck. Fortunately, for the rest of us, there’s the cafe, which serves honest-to-Ibsen Norweigan food at less heart-stoppingly-high prices. 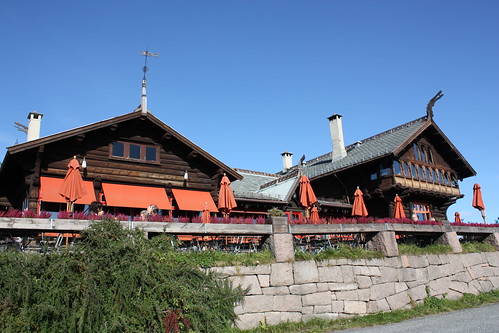 Why does no one ever mention the cute, pseudo-Bavarian side of Vikings?

We went to town, ordering meals and drinks and the occassional dessert, and the total for four people was something around $130. Which was fantastic, because it meant that we didn’t need to try hiding our entrees under a napkin as we went up to the cash register. Not that I would do something like that. NOoOooo. 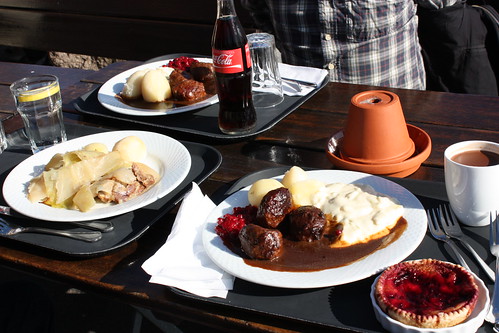 The cabbage seriously tasted far better than it looked. Like that’s hard.

Indian Restaurant that Kim dragged us to (I don’t know exactly where it is, but if you run around in circles until you are exhausted, you should be right in front of it):

Our friend Lisa and her husband were also in town for the conference, and since Lisa’s brother, Kim, lives in Oslo, he decided to show us around a bit. I will say this: Kim is darling and it was very sweet of him to play tour guide. But seriously, he has the sense of direction of an epileptic gerbil. With an ear infection. So when we finally made it to the Indian restaurant he kept swearing was just one more block away, we were all ear-to-ear-smiles, mostly because of the sudden drop in our chances of dying of exposure.

Oh, and the food wasn’t half bad: 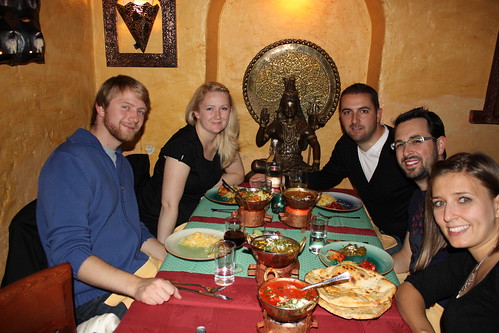 The culprit, at far left.

We ordered four entrees, which weren’t particularly huge, but were nevertheless filling, as well as rice and naan, and a couple drinks. It was about $60 a person.

If I lived in Norway, I bet I would weigh 100 pounds, on account of not being able to afford any food. Which would be awesome, except for the fact that I couldn’t afford any of the clothes I’d want to wear with my new, emaciated figure.

Cafe Skansen is located is a bit touristy. Food is fairly traditional with a bit of a fancy epicureal spin, and will cost you a small fortune. It’s pretty tasty. Just try not to dwell on the fact that you paid $6 for a cup of tea, and you can have a nice time. Here’s our $30 appetizer, in front of John’s $20 pate. 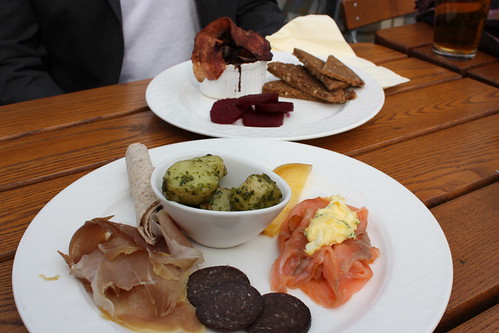 If you try and do the math, that potato on top comes to about $2.

Our friend Lisa loved this place as a kid, so when she said she wanted to go back, we were only happy to oblige. Truth be told, even if she didn’t have so many fond memories of the place, I still would have liked it. The pizzas were okay, but my pasta was great, and everyone’s entrees were under $20, which was kind of amazing. We all went pretty traditional, except for Lisa, who ordered the “Pizza Ciao”, which featured steak and bearnaise sauce. 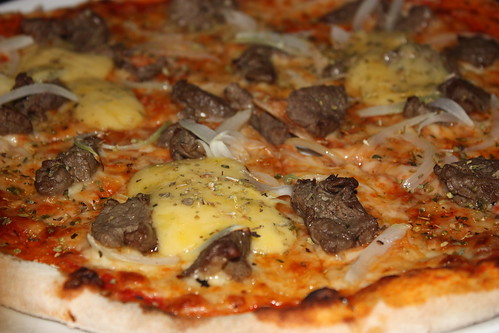 While this certainly wasn’t my cup of tea, I think travel companions who make a stink about what other people order deserve to be slapped. Besides that, Lisa had found us the only restaurant in town that didn’t make you sign the credit card receipt in blood, so, honestly, she could have eaten an entire bowl of bearnaise and I’d have been cool with it.

I love to see the differences in how candies evolves across cultures. Like how peanut butter cups are something you’ll only see in the U.S., thanks to George Washington Carver (and the fact that everyone else on the planet hates peanut butter). Or how the Italians put hazelnuts in a lot of their chocolates, because they grow so plentifully in Italy. Or how the Norweigans roll black licorice in salt, because they hate children.

Yeah. You heard me. Salt. As if everything in the country didn’t taste like salt, already. And the craziest thing? It’s not that bad. It’s really not. Yes, it’s different, but hell – I grew up eating chicken feet and tripe. Do you sincerely think a little gummy fish with some salt on it is going to phase me? Just grab me an $8 bottle of water, and I’ll be fine. 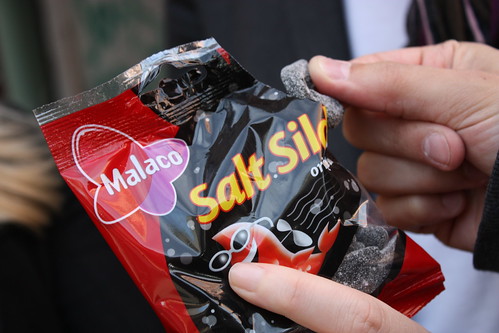 But don’t get me wrong: it ain’t candy.

The other sweets you can find in Norway are basically standard European fair: chocolates, gummies, chocolate-covered gummies, etc. 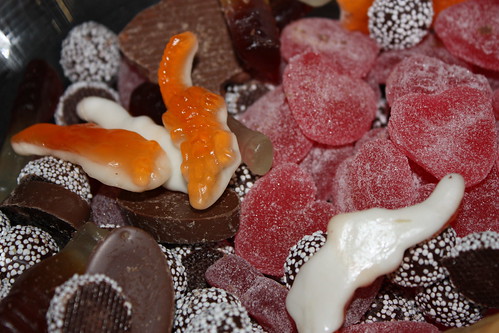 There’s still the errant grain of salt or rogue piece of licorice to remind you where you are. But I’m kind of okay with that.