Sigh. So, as you might remember from yesterday’s post (because I not only pretend I have readers – I pretend I have loyal ones), we stayed at the Grims Grenka hotel in Oslo. Or, as I like to call it, Torvald’s House of Design and Mystery. While we were there, we experienced a Dick Move, followed, over email, by an Awesome Move. Since this has never, ever happened before in the history of time, I am unsure of what to do. Here’s what went down:

Norway, as I mentioned, costs a bloody fortune. This is because everyone in the country gets a share of oil revenue, plus they have free healthcare (someone please, remind me why Socialism is evil again). Their currency, the kroner, never dropped, being that it had oil behind it, so a once very expensive country is now a mortgage-your-house or trade-in-your-firstborn-child-to-pay-for-lunch country. This might be a problem, because I’m pretty sure we already traded in our firstborn to skip the security line at Sea-Tac a couple of weeks ago.

So while most shopping was definitely out, parks and museums – which were government funded and very affordable (again, damn Socialism) –  were definitely in. We went to a half dozen, including the Kon-Tiki museum, the Viking Ship Museum, Vigeland Sculpture Park, and the Munch Museum. The only souvenirs that I picked up were two prints at the Munch museum, along with a stamp of The Scream. The prints came to around $30 or $40 dollars, and the stamp – I kid you not – was about $5. The best part? When I bought it, the woman asked if I was just buying it to collect it. I told her yes, and she said that was good, because it wouldn’t actually be enough postage to mail a letter to the U.S. I am hoping the $5 price tag was because the stamp is rare, and not because it costs FIVE EFFING DOLLARS TO MAIL A LETTER TO THE U.S. FROM NORWAY. One can only hope.

I put the stamp in my wallet, and the two prints were placed in a large white shipping envelope … which the hotel cleaning crew threw out.

Yeah. They threw it out. Can I restate that this thing was massive? And clearly not trash? And the contents were around $40 but more importantly irreplaceable since when the hell am I going to be in Norway again? I was not happy.

Of course, in our jet-lagged delirium, we kind of believed the guy at the front desk when he said that those items clearly had not been thrown out, and that we had probably packed them. Of course we hadn’t. Dick Move, front desk guy. And Dick Move, cleaning staff. What the hell would possess you to throw out a huge envelope full of prints? I realize that $40 is what you pay for a cup of coffee (no danish), but seriously.

Naturally, I did what any reasonable person with an editing background and penchant for passive-aggressiveness would do: I wrote them a terse letter. Unsure if the phrase “Dick Move” would translate, I decided not to use it. I wasn’t even particularly harsh. I wrote that I realized mistakes happened, but considering the size of our parcel, and the quality of the hotel, this sort of thing was really quite unacceptable.

I got the apology of apologies. I got an incredibly long, heart-felt letter, that made me think that some poor Norweigan hotel staffers are in a dark dungeon flogging themselves for the loss of my $40 prints. They told me (and had it been any other place but northern Europe, I may have doubted it, but it rang sharply of sincerity) that they scoured the room and reviewed security tapes looking for the envelope, and that the staff in question is being “re-trained” (I really hope that’s not as bad as it sounds, and that I didn’t get anyone in trouble). They also offered to go back to the museum to repurchase the prints and mail them to us. Plus, they offered us an upgrade to a suite next time we visit (which, based on what the regular rooms look like, could be potentially horrifying. But still, nice gesture).

So, all-in-all, an Awesome Move. The problem is, I now have ZERO CLUE as to what to do about it. Take them up on their offer? Just let it go? I’d love some thoughts and feedback. I usually make the internet handle all important decisions in my life, anyway.

In the meantime, the only souvenir I have from Norway is the stamp I put in my wallet. Which, honestly, sums things up kind of nicely: 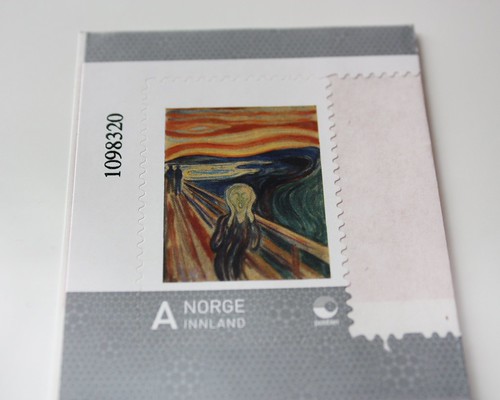 I hear ya, buddy.