— Note: I wrote this post last week, but like a fool, didn’t have access to the photos until after I got home. Sorry for any confusion. —

At the time of writing this, I’m in Manhattan, sitting in what might be one of the scarier hotels my husband and I have had the pleasure of patronizing in our many travels. The hotel itself is passable (a solid two-and-a-quarter stars on the Everywhereist Scale which I  just made up this second). But between drunk hotel guests dancing in the hallways in Speedos, and rogue toilets that made a break for it (but made it only so far as the hallway), don’t be surprised if I abandon this post and wander off into the New York night.

That being said, this post is not about New York. No. This post is about the craziness that is the Grims Grenka Hotel in Oslo, Norway. It was awesome and horrifying and impractical and wonderful. Kind of like living in the bedroom displays at IKEA. It looks great, but at some point you realize you’re showering in the middle of your living room, and it all falls apart. (Note: I am well-aware that IKEA is Swedish and not Norweigan, but I find willful ignorance of other cultures to be rather charming.)

Plus, the staff at IKEA warned you against getting naked in their showrooms and you’re facing a lifetime banishment. Weak.

We arrived at the Grims Grenka at nine in the afternoon (damn you, jetlag!) and instantly noticed something kind of weird about the lobby. Mainly, that you can look straight into quite a few of the rooms. 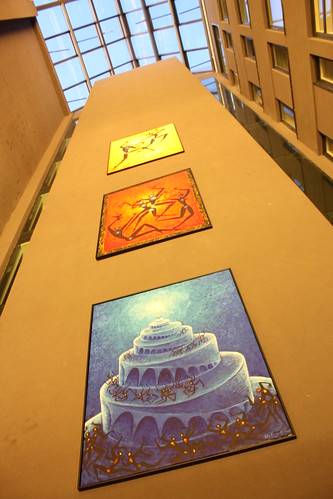 Note the floor to ceiling windows on either side of the paintings.

Considering this rather prolific display of voyeurism, you’d think that the security guards at IKEA would have been a bit more understanding when someone (no need to point fingers) decided to strip down in the middle of their showroom. BUT NO. Thanks a lot, Ingamar and Sven.

Since my husband and I are pudgy mortals compared to the Scandanavians the staff of Grims Grenka is used to, we did not receive one of these rooms. This was probably the best for everyone involved.

Instead, they decided to let us sleep in a discoteque. Please notice how it’s sunny outside, and the room is pitch-black. I can only imagine how cheery this place is during Norway’s 352 days of winter. 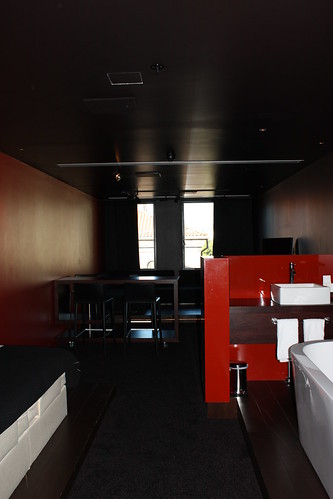 Also, notice how the bed and bathtub (which is inexplicably located in the middle of the room) are on raised platforms. 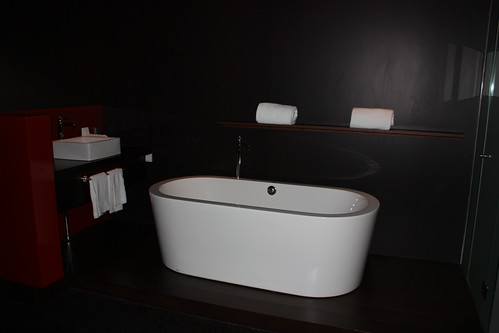 For those of you looking for that showering-in-a-nightclub-experience, the Grims Grenka is perfect.

This came in handy when, in the middle of the night, I needed to pee but also wanted some way of jabbing my toe and possibly breaking my neck in the process. Talk about efficiency.

And speaking of efficient, these light-switch panels were not: 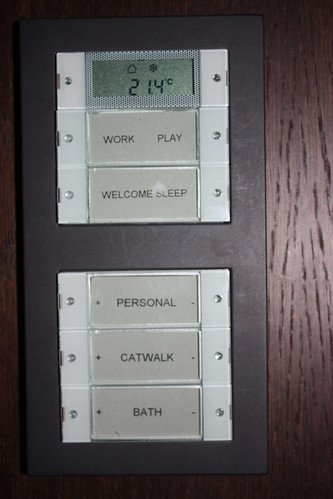 Only some of the switches refer to parts of the room. Others refer, rather subjectively, to what you might want to do in the room. Based on my observations, here is what I was able to gather:

But the best part? The second to last button reads “catwalk”.  Obviously. BECAUSE OUR ROOM HAD A CATWALK. Rand and I kind of freaked out when we saw it, and did what any two rational adults in our position would do: we had a walk-off. Rand won, but only because I’m not an ambi-turner. I have omitted the photos from this post to protect the innocent, and also myself.

Okay, fine, here’s one of me making the Zoolander Magnum face: 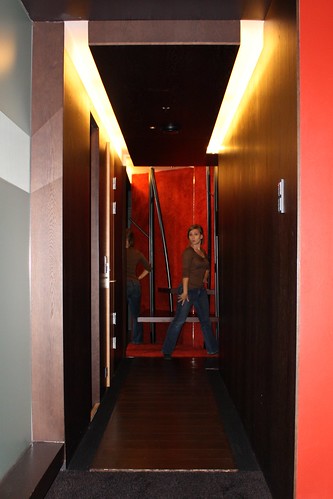 Don’t think, though, that the fabulousity of Grims Grenka ends with the hotel rooms. No. Not at all. This anti-Bauhausian commitment to form over function extends to the dining room, which I am fairly certain was designed by vampires. Space vampires. Who like water features.

In all fairness, the waterfall that lined divided the dining room was actually kind of cool: 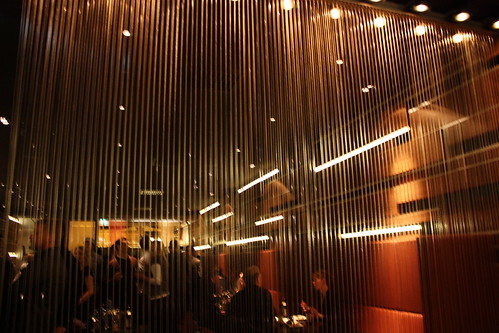 It also featured open-flame pits, located conveniently in the middle of the tables where breakfast was served (yes, someone was singed. No, not badly): 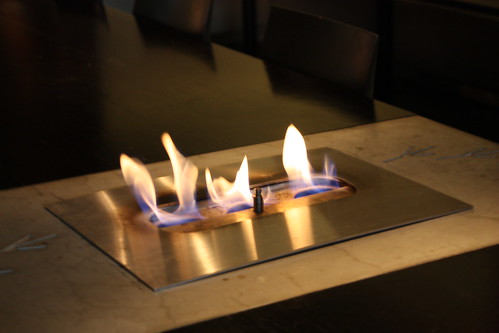 It wasn’t like there was just one, either. They were all over the place: 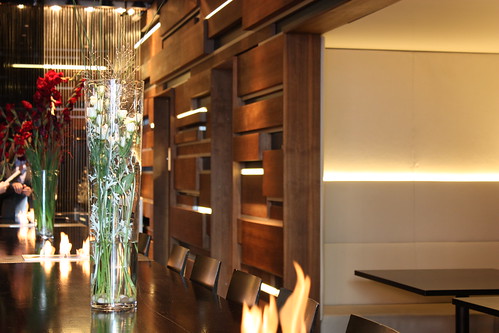 Because any hotel can have one perilously-located fire pit. Only top hotels have a half dozen.

But the greatest feature by far was the Star Trek-esque moving glass door. We got downstairs to the dining room, we stared blankly trying to figure out a way in. There were waterfalls on either side of an enormous pane of dark glass that extended all the way up to the 12-foot ceilings. I was about to suggest to Rand that we needed to go around some other way, when someone approached the door and it silently and smoothly slid to the right.

None of the Norweigans seemed too shocked about it, but us yokels were jaw-droppingly shocked at the whole thing. The whole door was glass. AND IT MOVED. Behind a waterfall. This is what bad guys dreamed about for their lairs the 70s. 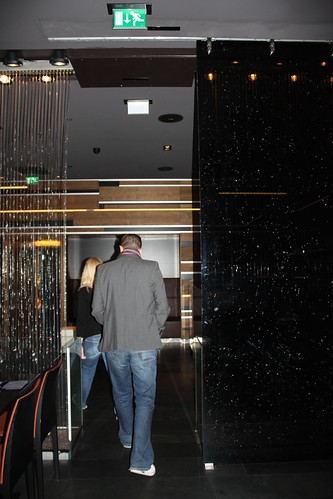 Okay, Norway. You win the awesome door competition … for what it’s worth.

Grims Grenka also features one of the most popular rooftop bars in Norway (according to them). I can’t really confirm this claim, since the bar was closed (and seemingly had been for quite a while), and we had to sneak out on to the empty, cold, dark roof. It was, however, a very nice empty, cold, dark roof. But really, who needs a bar when your room is a nightclub?

We were lucky enough to have our room covered by Rand’s conference organizers (which was the reason why we were in Norway in the first place). Based on the price, I’m not really sure I’d recommend it, since there are much, much more affordable places in Oslo, even by Norweigan standards. Based on the exchange rate (and please, forgive me for being so exact), the room cost precisely 1.75 assloads. Which I’m sure you will agree, is a lot.

But hey, it beats an indescent exposure charge at IKEA. Hypothetically. I’m sure.