My sincerest apologies for dropping off the radar and neglecting to put up even one post last week. I am sure my fan is very disappointed (hi, Rand!). Things have been crazy – Oslo two weeks ago, a few days at home, then New York and New Jersey (we just got back yesterday), and now five whole days at home before heading off to London on Saturday morning.

I have five billion things to do, but for some reason scanning bad photos of me from the 80s onto my computer seems to have taken precedence. I blame my short-attention span (a result of a childhood spent watching tv from 3 feet away). But, since whenever I am swamped, blogging falls to the bottom of my to-do list, I am making the following proclamation: a least one blog post a day, five days a week, for the next two weeks. Promise, cross-my-heart, and all that jazz. Do you hear that, five-people-who-read-my-blog-who-aren’t-my-husband? One blog post a day.

This means I’ll even been posting next week from the U.K., but since I’m behind on entries, I’ll likely be posting about Oslo or New York from London, while fighting off diabetic shock from waaaay too many Cadbury confections. Generally, those sort of cultural collisions make me giddy with delight (though they occasionally make for some very confusing blog entries), but it’s nothing like what we saw yesterday.

Since my mom lives perilously close to the airport, the hubby and I stopped by to see her when our plane landed, and decided to grab a quick lunch. Since mom lives in the epicurial wasteland that is Des Moines, WA, we went to Red Robin. And that is where we and my mother, my born-and-raised-in-Rome, more-Italian-than-pasta-itself mother, saw the following: 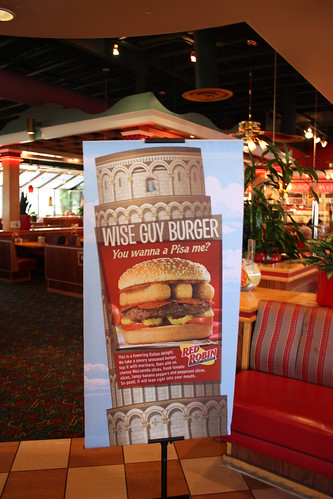 Just so we’re clear, that’s a burger. Topped with marinara sauce. And fried mozerella sticks. And pepperoni slices. Named after mafia henchmen. And the name of the city of Pisa has been reduced to a pun. As you can imagine, this went over really well. My mom’s face says it all: 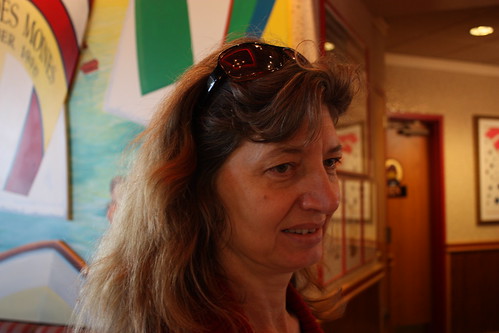 She would be so angry if she knew I posted this. I consider it payback for the haircut she gave me in 1987.

So perhaps this wasn’t so much a “cultural collision” so much as a “total bastardization of one culture by another”. Not like this is anything new for anyone at all. As we ate lunch, Mom recalled how when the Italians she knew first found out about sliced white bread and mayo, they freaked out. “English-style sandwiches” slathered with yellow-y mayo were apparently a total hit. Though apparently they weren’t too off base from what you could find in England.

As for Red Robin, bastardized or not, my little cousin Giovanni adores those mozzerella sticks. He would probably love that burger. And that might be the only Italian thing about it.