I have a bit of a  love/hate relationship going on with New York. There are times when I truly believe (and could never be convinced otherwise) that it is the greatest city in the world, and everything beyond Manhattan is just one long suburb.

Other times, when the girl at the Zabar’s breakfast counter forgets my latkes, when the doorman at our hotel is a total d-bag, or when the umpteenth person has shoved past me at the subway station, I start to long for Seattle, and our passive (rather than outright) aggressiveness.

This, fortunately, is a story about a very good morning.

It didn’t start out like that. Not at all. It started out a bit too late – we were checking out – meaning that Rand couldn’t have breakfast with me. And this upset me, more than it should have, maybe, because I hadn’t seen much of him at all over the last few days. So when he was about to leave me standing on the street, with no hotel room to return to, I said those words I occasionally say, the ones I never really mean, the ones I instantly regret …

“Maybe I should have stayed at home.”

Like I said, it didn’t start out great. But don’t worry: it gets better. And, spoiler: the two romantic leads get together. So – Rand headed off to his conference, and I went back to the hotel’s lobby with my map. I had no idea what I was going to do, but I had spotted something on my map that said “Roosevelt Island Tramway” on the east side. And on the bottom of Roosevelt Island, I saw this: 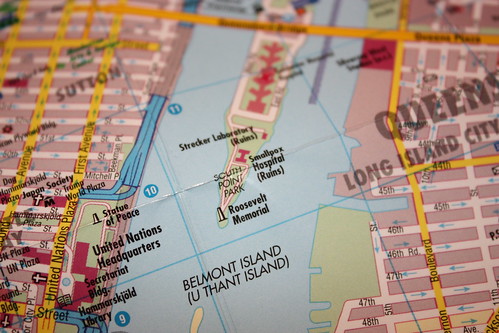 You had me at Smallpox Hospital (Ruins).

I used my phone to try to get more information about Roosevelt Island, and found that the tram was $4.50 roundtrip, and ran every 15 minutes. Sold. Even if it sucked, I figured I’d have a nice view, and I could head right back to Manhattan without too much trouble.

But, oh, it did not suck. It was not even in the same realm as suckiness. It was awesome. AWESOME. The view from the tram is great: 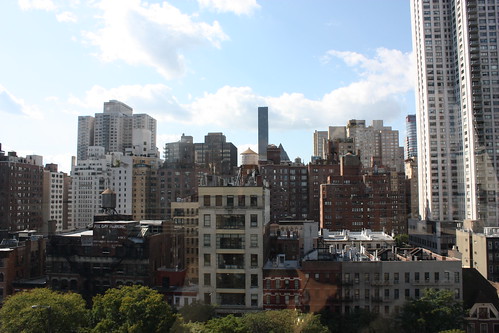 Do you remember the tram King-Kong attacks in the now-gone Universal Studios ride, Kongfrontation? It’s based on the Roosevelt Island Tram. And yes, Kongfrontation is an awesome name. 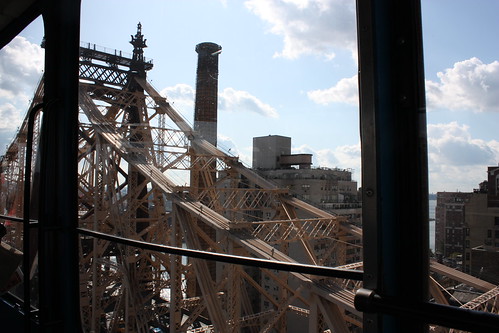 I did have a momentary panic when I got off the tram for a couple of reasons: 1.) I didn’t really know where I was and 2.) OMG what if King-Kong was real? and 3.)  no one else knew where I was, either. I texted the hubby and told him that I was going to go explore a remote part of Roosevelt Island to look at an abandon hospital. Because, you know, I don’t want him to worry.

I headed south along the water (there was a bus that took you around the north end of the island, but it only cost a quarter, and that made me suspicious). There was an amazing view of Manhattan’s east side and the underside of the Queensborough bridge. 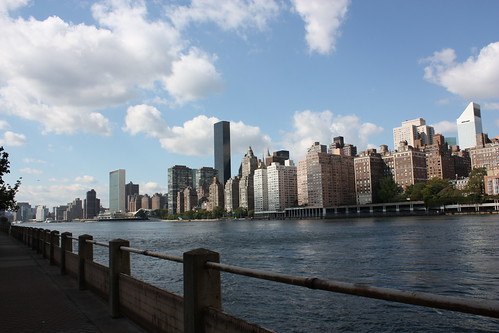 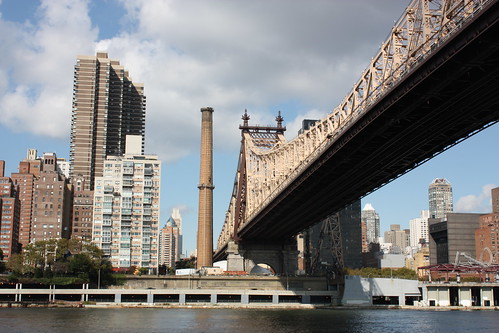 Also was able to get some nice shots of the East side and the Chrysler Building. Why more people don’t visit Roosevelt Island, I don’t know. There’s even a subway that stops there … 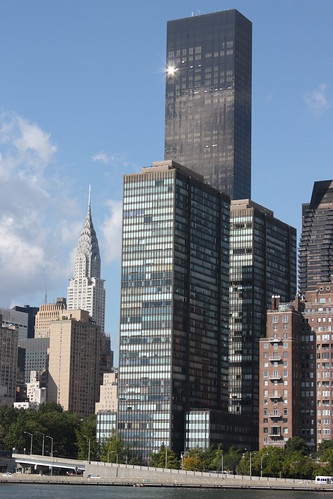 Then I bumped into a bit of a, uh, situation. There was a gate. A barbed-wire-on-top, no-trespassing-sign-adorned gate. But the door to the gate was open. I mean, I had to keep going, right? For the sake of journalistic integrity? Or something? 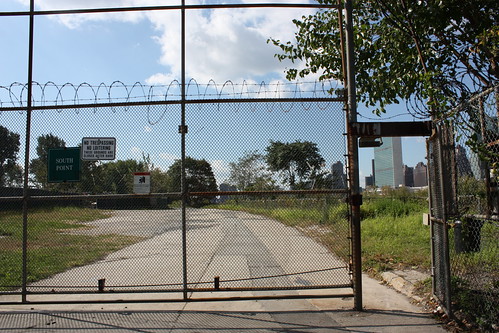 The only thing was, I was a bit scared that I was going to get locked in. Also, the phrase “criminal trespass” has a nasty ring to it. But then I thought of you, dear reader(s), and I kept going. Because if anyone stopped me, I’d just say, “It’s okay. I’m a blogger.”

I walked a little further, and saw this: 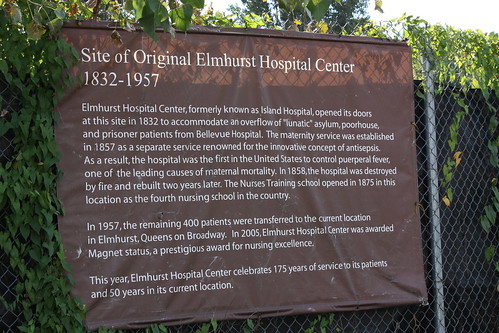 Followers of the blog know how much I love a good "lunatic overflow" hospital.

It sounded fascinating, of course. There was an open gate to a construction site which had been left open, so I took a peek,  but all I saw were some broken pieces of masonry. Apparently the city hospital had been demolished a while back, and some pieces of the rubble are going to be used to make a retaining wall for new construction going up (which is a recipe for a Poltergeist-style haunting, if I’ve ever heard of one): 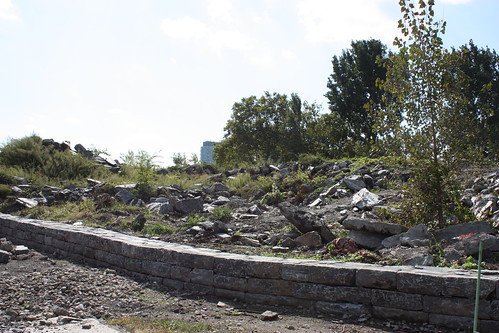 I was a little disappointed by this scene, so I passed it and kept walking south, hoping that there was more to the Roosevelt Island ruins than a construction site (turns out, there was: the site I had been looking at was the original site of Elmhurst Hospital, but not of the Smallpox Hospital). I was slightly worried that I really wasn’t supposed to be wandering around in that area. At one point, I saw another woman in the distance, walking behind me, but she disappeared from sight. Then I saw a security vehicle driving down the dusty dirt road toward me.

“This is it,” I thought. “Busted.” I figured I’d just keep walking and when they asked me what I was doing there, I could either 1.) play dumb or 2.) play Italian. There was also option 3.) play Italian and dumb. But instead of an interrogation, the security officer just waved and drove by. Which makes me think that it was either okay for me to be there, or that people in NYC aren’t sticklers for rules like we are in Seattle. I suspect it’s the latter.

After walking a bit, I stumbled across what I had been hoping to find. Happiness, thy name is abandoned Smallpox Hospital. 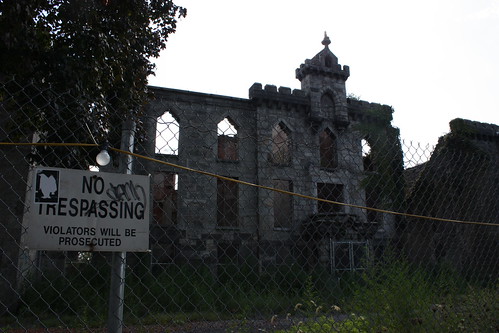 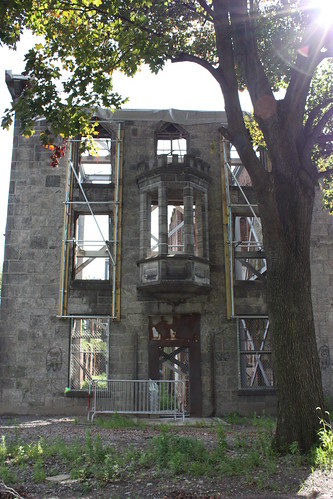 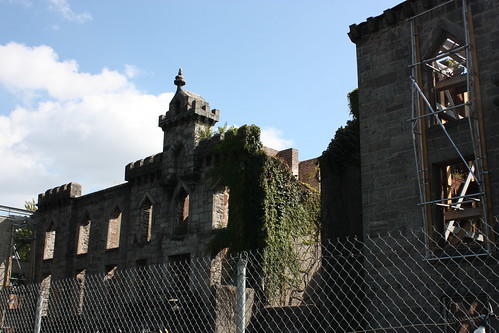 I wish I could have gotten closer, but there was yet another barbed-wire fence, and I figured I shouldn’t push my luck. Besides, even though it was daytime, and beautifully sunny and warm, this was one of the creepiest places I had ever been. There wasn’t a soul in sight, it was dead quiet, and I could hear crickets. All this, despite being just across the water from Manhattan. I could still faintly hear honking and cars from the east side. And the view from the south end of Roosevelt Island is this: 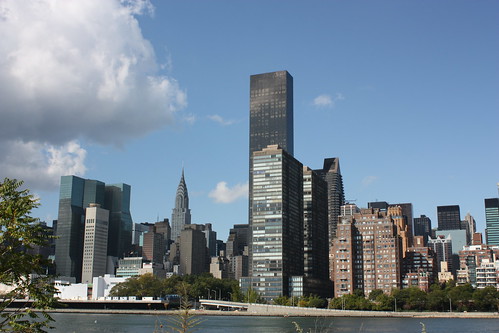 Can you imagine? Being so close to one of the busiest cities in the world, but you’re entirely alone. It was one of the craziest experiences I’ve had. There’s a huge clearing at the very tip of the island, where a Roosevelt memorial is going to be installed. 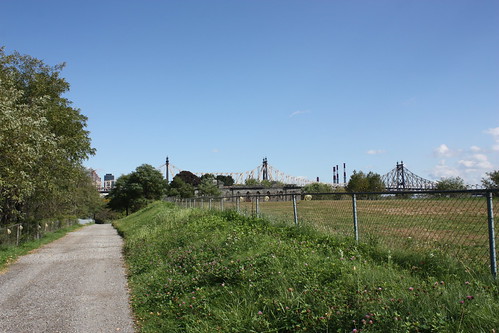 Pragmatically, I couldn't believe there was this much undeveloped real-estate anywhere close to Manhattan. 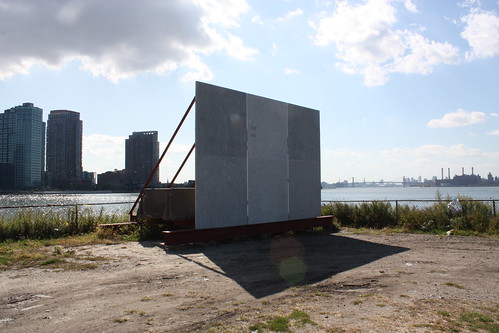 Memorial-to-be: the only thing engraved on the marble at this point was "FDR" and then another superfluous "R". I don't know what that was about.

Behind the memorial-to-be, you’ll see Queens, which would be significant later that day, when I hopped on the wrong subway and ended up there. Go figure. The ONE TIME I get on the wrong train, I don’t end up one or two stops in the wrong direction. Nooo. I end up on the express to the wrong borough.

But that wouldn’t be until later. I was still exploring the southern tip of the island, and decided to take a few photos by setting my camera’s auto-timer. You know what’s hysterical? When you perch your camera rather precariously on a railing, on a very windy day, and it starts to slip. You get some rather unflattering shots of you running towards your camera. They’re funny, but I’m not going to post them. No, really. Instead, here’s a photo of me looking moderately cute: 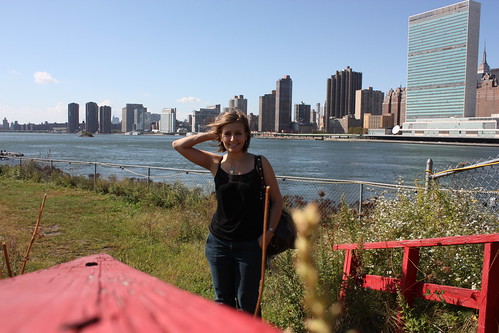 I mean, still bottom-heavy, but cute.

And here’s the view from the very southernmost tip of the island: 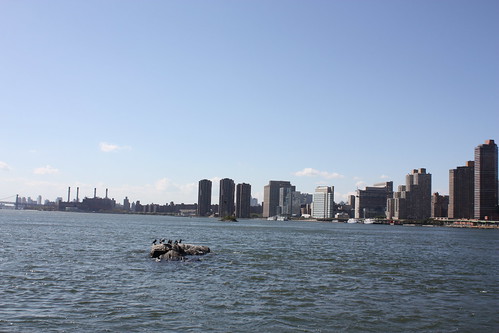 As I walked back,  I still saw no one. It was a bit disconcerting. I was only gone an hour or so, but I was starting the miss the hectic sounds and sights of the city. It reminded me of something a New York-transplant said to me once. He was a middle-aged gentleman who had moved to New York about 20 years before, and vowed never to leave. We were out to dinner, and he suggested we order a bunch of dishes and share everything.

“After all,” he said, “I’m from New York, where life is a shared experience.”

How he managed to make it neither hokey or silly-sounding, I don’t know. But it was honest and wonderful and I wanted to hug him.

And after an hour in New York, technically an hour in Manhattan (since Roosevelt Island is considered part of it), with only crickets to keep me company, I was starting to feel lonely. So I headed back.

On the way to the gate, I noticed something that made my heart stop, momentarily. The gate to the construction site, which had been open as I walked by the first time, was now closed. 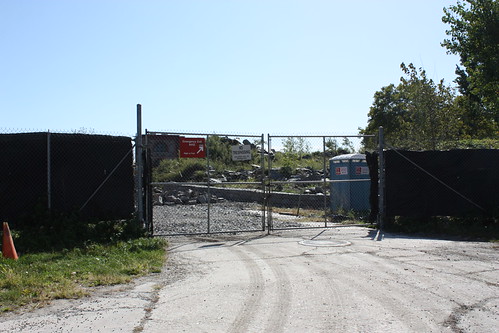 Damn it. This is how horror movies start.

This alarmed me. There was no the security guard would have closed the main gate, too, knowing that I was inside, right? Fortunately, he hadn’t. Which is a good thing, because I’m not sure how exactly I’d have explained that one to the hubby:

“Um, hi, honey … so … I wandered onto the grounds of an abandoned hospital and am now locked in. Could you please come get me … preferably before either nightfall or the zombie apocalypse? Because I’m pretty sure this is their home base.”

I caught the tram back, and from my vantage point, was able to see where I had been: 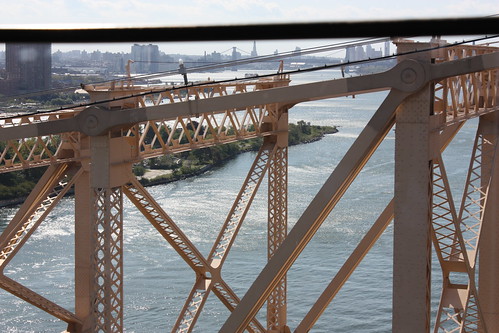 See the little green tip of the island? That's where my camera almost met its doom.

And where I was going … 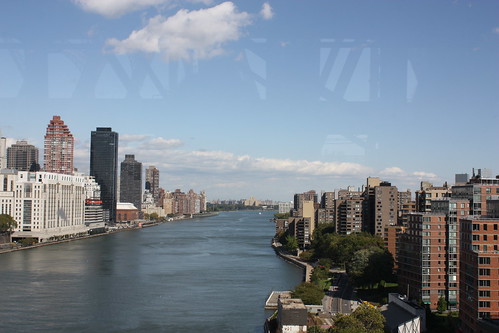 … back to the city, where life is a shared experience.