For the most part, I get the English. I really do. I know that we’re “two countries separated by a common langauge” (or something equally obnoixous and clever), but for the most part, I understand and am pretty familiar with English culture. My mom spent her childhood split between the U.K and Italy, and my aunt is married to an Englishman, and I’ve got English cousins and the like. They make tea roughly 5 times a day, they consume a disproportional amount of potatoes, and they influenced my vocabulary as a young child to the point of me saying weird things, like callings bangs a “fringe”, sweaters “jumpers”, and referring to a car’s blinker as an “indicator”. That last one is something that, for whatever reason, I’ve been unable to kick.

Oh, and growing up my brother forced me to watch hours upon hours of old Doctor Who episodes with him every rainy weekend we had. I cannot even begin to articulate how boring that sort of thing is for anyone, much less a nine-year-old girl. Seriously, he owes me. Big time. 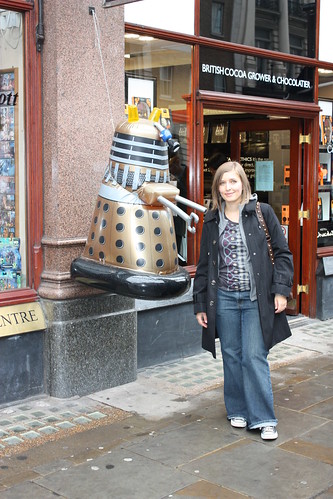 Because of my bro, I not only know what this is, but was able to make a crack about how I could escape from it by running up a flight of stairs.

The point is, I rarely encounter an English cultural reference or practice that is completely foreign to me. Until Conkers, of course.

A few weeks back, we were wandering around Norway with our friends Lisa, who’s Norweigan but has lived in the U.K. for a good bit now, and her husband John, who’s English. We were walking through a park and came across a chesnut tree. While not entirely common in the Pacific Northwest, we do have a few of them, and I remember there was one near the playground of my preschool. 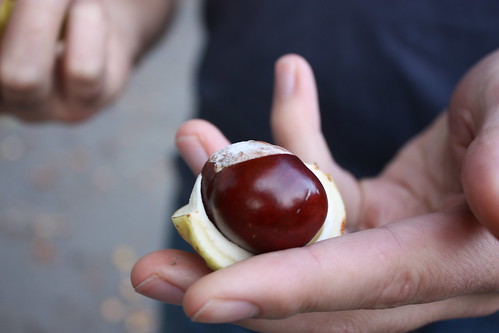 It looks so innocent. But wait.

At this point, I thought it was just one of those funny-sounding British exclamations, like “Blimey!” or “Bollocks!” or “Shine your shoes, Gub’nor?” But apparently not. John explained that Conkers is, in fact, a game. A very dismal-sounding, potentially injurious game.

Here is roughly my understanding of it by doing a little research on the internet. I still, for the life of me, cannot tell if this is a big joke or not.

First, you start off with some horse chestnuts (which, incidentally, are not the variety that can be eaten). You want one that is relatively symmetrical and sturdy, as it makes the best Conker.

That’s what she said.

You then apparently drill a hole through the Conker, and thread a string through it. You then let the Conker dry out, or soak it in vinegar or something, to ensure that it will be rock hard (that’s what she said). Then you and a competitor take turns flinging your hardened nuts at one another.

You play until one of the conkers is destroyed.

So, let’s recap: Take chestnuts, make them rock hard, and fling them at one another until one of them breaks, leaving the loser sans the sweet smell of victory and sans “toy”.

It makes wonder if this is why English children in movies are always so forlorn and heart-broken (See Billy Elliot, Empire of the Sun, Finding Neverland. Though it might also be because their mothers are dead, dying, or missing). Still, it makes you sort of grateful to live in a country where the 2nd amendment is live and well, and this sort of barbarism, if it managed to infiltrate our schools, would surely be outlawed.