A while back, my husband overheard a conversation in the security line for the Boston airport. It happened to be a few days after St. Patrick’s Day. Rand was flying from Boston to Iceland, and several young Irishmen ahead of him in line were going back home, and exchanging stories of the past weekend they had spent in the city. And for them, it was apparently a very good weekend.

Because, as Rand explained it back to me, it is very, very easy to, um, make friends on St. Patrick’s Day in Boston, if you are a reasonably good-looking young Irishman. And, having learned this, these young men made a yearly trip back to Boston in order to “make new friends.” One guy explained that on a particularly successful year, he befriended two ladies on the same night.

Now, while the idea of exploiting your heritage during an annual carnal pilgrimage might seem sketchy to some, I’m actually all for it. I figure there’s no problem, as long as both parties are “willing to be friends”, and both people understand the terms of the friendship, and take special care to make sure the friendship doesn’t result in any unwanted pregnancies or STDs (Um, I think my analogy just broke). The point is, I don’t see getting laid on account of your ethnicity or your accent as being a bad thing.

Strangely enough, the converse isn’t true, and if someone doesn’t want to know you (in either the biblical or platonic sense) because of your accent or your ethnicity, they deserve a smack in the head.

We also heard from a friend of ours that there was a brief window during which Americans could very easily “make friends” in Europe. It started directly after Obama was elected, and continued until Congress started bashing any country with socialized health care. But for a brief window, apparently it was great – people running up and hugging and kissing Americans in the streets. Our nationality was all of a sudden instantly shaggable. For a brief moment, we all knew what it was like to be Italian. 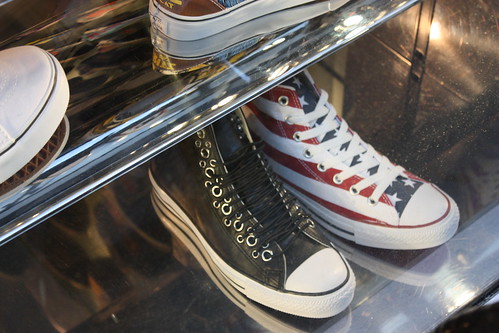 I actually saw this display in London, in October, 2009.

And again, I’ve no problem with it. Because the thing is, on a very basic level, we’ve all got two competing sides – a very rational, intelligent, intellectual side, and a passionate, carnal, sexual side. And when you want to bone someone because their convictions or their background appeals to your intellectual side, I happen to think that’s absolutely reasonable. In fact, it seems that wanting to sleep with someone because you like who they voted for is way, way more reasonable than wanting to sleep with them because they’re sort of cute, or they have a Smiths’ poster hanging in their bedroom.

As a young man from Dublin told me on our last trip to London, “We built your country. Us and the Eye-talians.” The kids in Boston must know that, and the kids in Ireland must, too. So I say go for it.

Because there’s nothing wrong with making new friends.