Back in my previous life, I worked as a copywriter alongside such brilliant minds as Philip and Angela at Cranium. While I was still a fledgling writer, trying to make the transition from secretary to copywriter (p.s., I love you, Peggy Olson), Philip was kind enough to let me help out on a few projects, gave me credit for the smarter things I did, and refrained from telling everyone about all my stupid suggestions and copy.

That’s right, Philip, you were kind. I don’t know what was wrong with you, either, but thank you.

One of the tasks that Philip let me help out on was creating in-flight content for America West; basically, writing Cranium questions that would appear on the little hanging tv screens throughout the plane. It was pure awesomeness, even though only 3 or 4 of the 40 or so questions I sent Philip’s way were actually usuable (“We try to refrain from using the phrase “mother f*cker” on content that children, or anyone else, may see.”). The point is, it was a lot of fun, and while creating interesting in-flight content is challenging, even a fledgling copywriter can do it with a relatively high level of success.

Which makes me wonder what the hell was going on when they hired people to write content for our British airways flight. Behold: 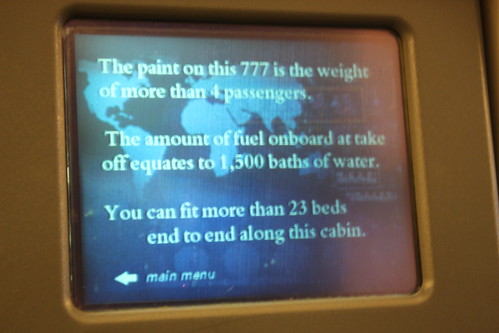 In case that photo should break in the near future, here is the text of the screen:

“The paint on this 777 is the weight of more than 4 passengers.

The amount of fuel onboard at take off equates to 1,500 baths of water.

You can fit more than 23 beds end to end along this cabin.”

I mean, not only can I not figure out why they would think those facts were interesting, but how they hell did they find those figures, anyway? They mean nothing to anyone. I can just imagine the exchange:

Traveler: Dude, you would not believe how big the plane we flew in on was.

Friend: Oh? How big was it?

Traveler: The paint alone for this thing weighed as much as four people.

Friend: I have no idea what the fuck that means. I have no frame of reference for paint weight as a correletation of size. Why you would use that in order to establish the size of the plane, I have no idea.

Traveler: Well, it was huge. The amount of fuel at take off equates to 1,500 baths of water.

Friend: Dude, what? That means nothing to me. How about stating that in gallons? Also, “baths of water” sounds weird. How about “bathtubs full of water”? And then list the gallons, too. Also, don’t ask me how I could infer this (because this is a scripted conversation) but why is “take off” two words? It’s one word. Or it’s hyphenated. That’s true even for British English.

Traveler: Well, it was such a big plane, that you could fit 23 beds end to end along this cabin.

Friend: It said that? It said that in the economy section you were sitting in? The one with no beds?

Friend: Doesn’t it seem kind of shitty for an airline to tell you, while you’re scrunched in an uncomfortable chair, about how many beds they could fit into the space you’re now in?

Friend: Man, even trivia questions laced with expletives would be preferable to reading that stuff.

God, I love the theater. And shitty in-flight copywriting.