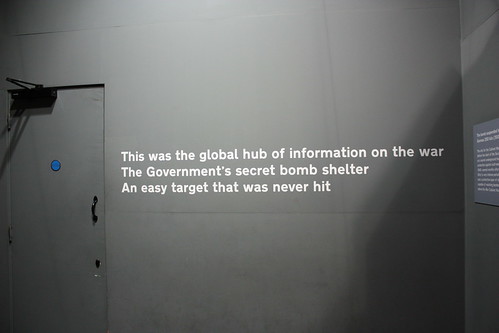 Sign on the wall inside at the Churchill War Museum.

The strangest thing happened to me that last time I was in London: I went to a museum dedicated to Britain’s role in WWII. And I liked it.

I know – you’re thinking that you can’t have read that correctly. “She must have meant cupcakes,” you think. “Or possibly Jeff Goldblum. She just got the names woefully confused.”

Which is a fair assumption, because were there museums dedicated to cupcakes or the equally-delicious Mr. Goldblum, I would be a lifetime member. But no, that is no typo – I went to the Churchill Museum and Cabinet War Rooms  (known collectively as the Churchill War Rooms), and I truly enjoyed the experience.

For the record, I am no expert in the field of 20th-century history. Rather, I have a dim understanding of what transpired on the earth before I was born. I can recount with frightening accuracy most episodes of Cheers, but ask me about the Geneva Convention, and I blank (note: I just learned that it’s actually plural – Geneva Conventions. See? Clueless). And it was as an attempt to rectify this glaring hole in my knowledge that I decided to go to the museum.

Also, it was pouring rain and freezing, so wandering around London was kind of a bust.

There’s two sections to the museum: one part dedicated entirely to Churchill’s life and career, and another dedicated to the Cabinet War Rooms – the underground bunker which housed the British command center in WWII. Both parts of the museum are entirely underground, and the Cabinet Warm rooms are actually in the old bunker, with large portions of it preserved to as it looked back in the 40s (though obviously some improvements and additions have been made since the second World War. Like 2-ply toilet paper and neon lights). At the risk of editorializing, I will tell you now: the War Rooms are far more interesting.

The rooms actually predate Churchill’s term as Prime Minister, but he was the first PM to make use of them. They were constructed in the 30s as a response to the soon-to-be-legitimate threat of aerial bombings.

Churchill apparently marched in one day, looked around, and said (in what I presume was very dramatic fashion), “This is the room from which I will direct the war.”

And someone may have gasped dramatically, and someone else likely fainted, as is what you do when history happens before your eyes.

Churchill conducted more than a hundred meetings from the bunker and members of his Cabinet spent long hours there. Higher ranking officials had their own designated bedrooms and offices. There were conference rooms and map rooms, and even a kitchen in which meals were prepared. 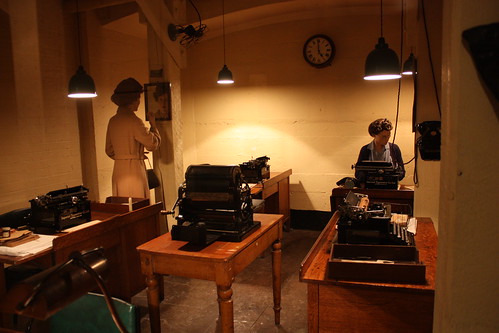 The woman at left is applying lipstick, because being underground during wartime is not excuse for not looking your freshest. 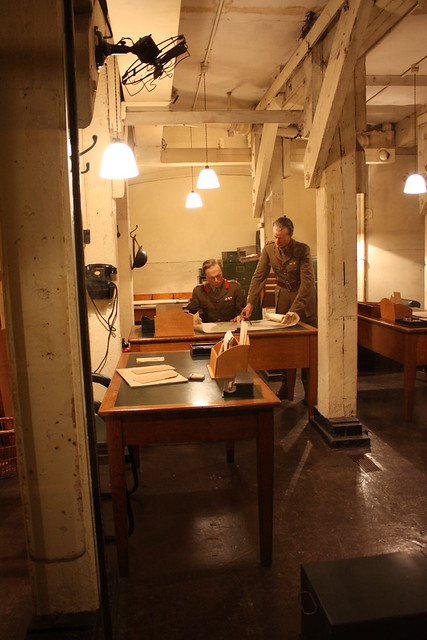 Check out the ceiling fan. 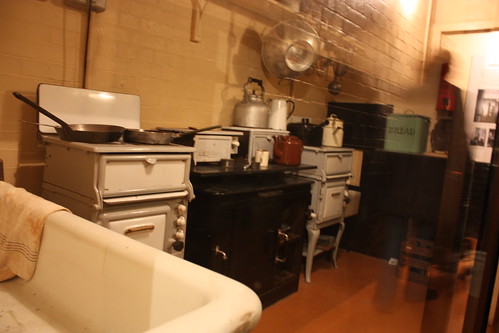 Apparently Churchill was chided for consistently ignoring the limitations of food rations. 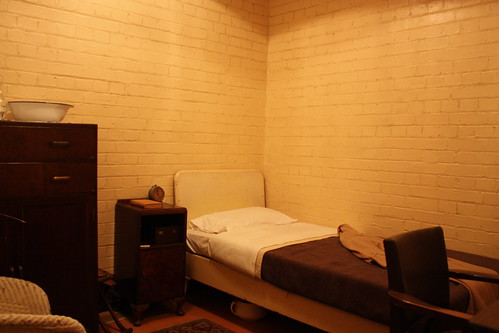 It’s a glimpse into not only the war, but also to administrations and governments of days passed. Even in the most dire moments, leaders of today conduct business from lavish hotel rooms and conference halls (the scene of Obama and high ranking officials reacting to the news of Bin Laden’s death comes to mind). But that wasn’t the case decades ago. Walls and floors were barren, the beds narrow and suitable for only one person. Imagine, just imagine telling Silvio Berlusconi that he had to sleep in a twin bed. He’d be infuriated once he realized that it wasn’t a king-size bed filled with actual twins.

And yet, despite how modest the accommodations were, there was something remarkably dignified about all of it. Flowered bedspreads neatly laid out, modest dining tables set with clean linens and matching tea cups.
– 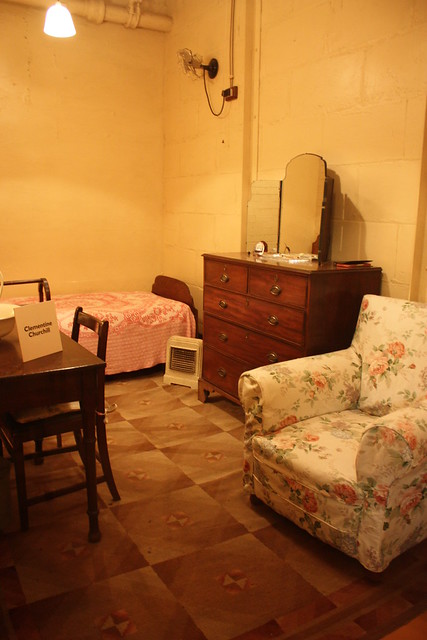 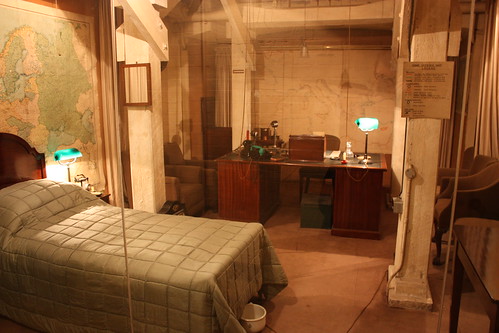 Churchill's quarters in the War Room. He never actually spent the night (preferring to return to Downing Street) but he did occasionally nap here. Notice the chamber pot. 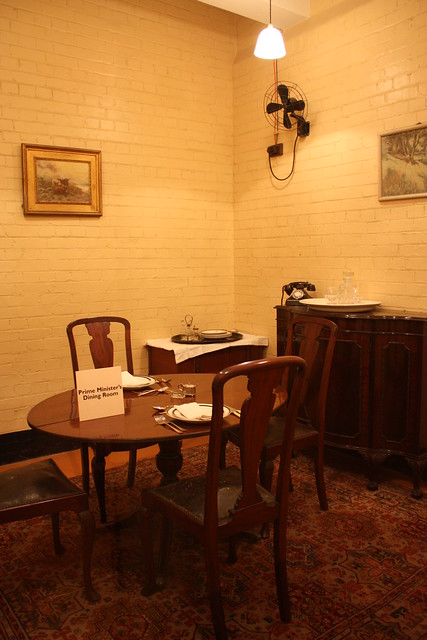 It’s a quite reminder that even in the darkest of times, you should compose yourself with dignity. I can’t think of a more truly British notion than that.

“Our country is at war, sir. Cities are being bombed, rations are tight. The Germans are creating an awful inconvenience for us.”

“Yes, it’s distressing, isn’t it? Let’s sit down and have a cup and sort this out. And for God’s sakes, man, STRAIGHTEN YOUR TIE.”

I just adore it.

I spent a long time roaming around the War Cabinet portion of the museum. I did the audio tour, which I HIGHLY recommend (the museum would have been confusing and meaningless without it). Wandering through, the recording device pressed against my ear, it was hard to reconcile the fact that I was presently carrying far more advanced technology than the officers in that crowded bunker had when they were directing a war. It’s shocking to think of how low-tech things were. Granted, technology isn’t required to wage a war (I’m sure there was a time when people just chucked rocks at one another, and before the invention of rocks, they probably just threw smaller people), but when you think about Churchill, tucked away in a tiny room, having a static-filled phone conversation to Roosevelt, it’s kind of humbling. 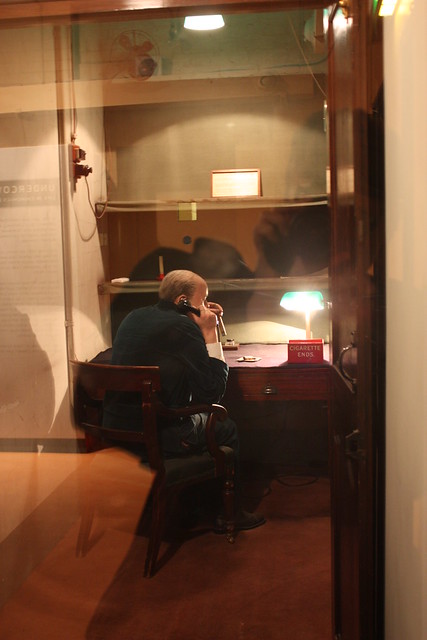 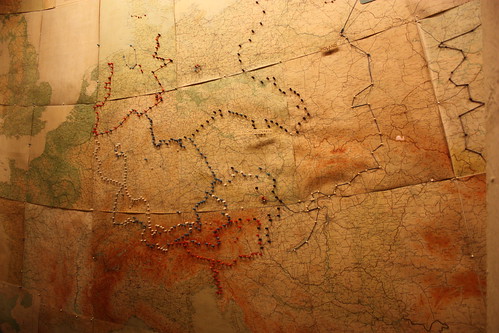 Military progression was noted on a map, with pins. 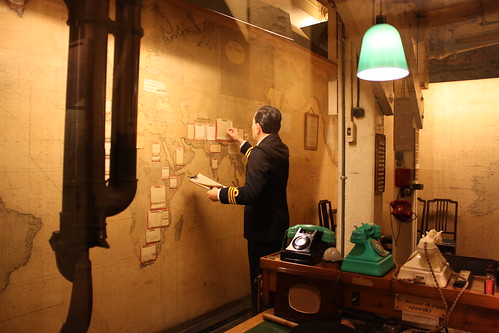 Posting updates from the field. 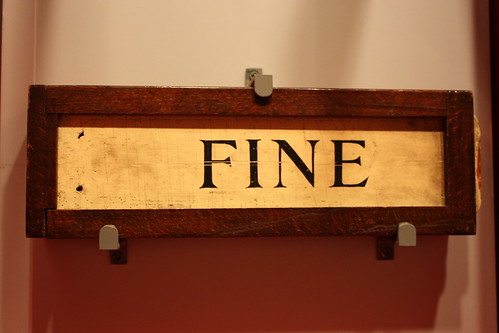 Wooden signs would indicate what the weather was like above ground.

There was only one hitch with the entire museum:  if you are following the audio tour, about halfway through the War Rooms you’re instructed to detour into the Churchill Museum. It interrupted the flow of the tour, and when I returned to the War Rooms, it took me a few long minutes to remember where I had left off in history.

The Churchill Museum itself has some interesting highlights, but I didn’t enjoy it nearly as much as the War Rooms (but hey, they’re attached, and it’s one admission to attend both, so I wasn’t going to skip it). I had trouble following the exhibits chronologically due to the confusing layout. There was also far too much information to digest. Unless you are a true history buff and a rabid fan of the statesman, you won’t want to spend more than a quarter of an hour there. And in that quarter of an hour, I recommend you take a gander at Churchill’s personal effects, many of which were on display: 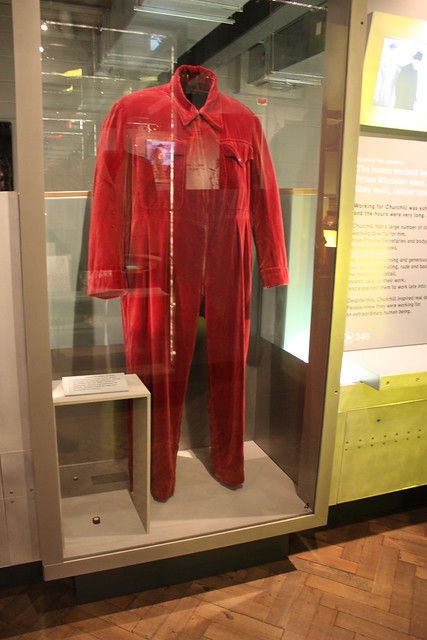 Churchill's pajamas: I bet he looked like a giant, drunk baby in this get-up. 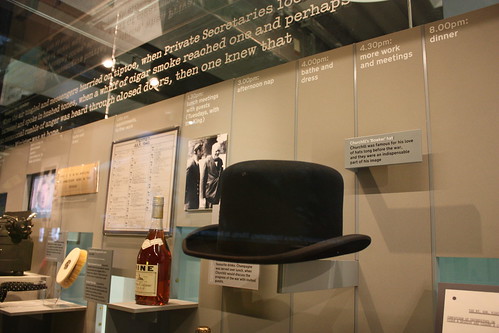 His infamous hat. For some reason, seeing this made the significance of the location hit home for me. 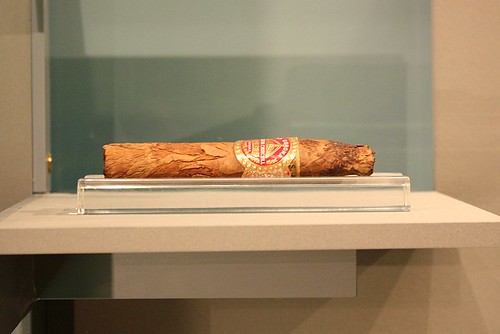 According to the museum, Churchill had about 8 cigars a day, but never inhaled (he was just constantly lighting and relighting them).

My trip through the museum put me in a contemplative mood. Like I said, I’m no history buff, and the American educational system’s teaching of history is a bit insular – you often neglect to think about how world events impacted other countries. The Churchill War Museum gave me not only historical context, but also provided some insight into the lives of English people during the war. They were knocked down. They picked themselves up, they dusted off their coats.

And then they had a cup of tea.

The Essentials on The Churchill War Rooms: