I cannot tell you when my friendship with Deanna began. It can probably be traced back to a single tweet, sent long ago, but I couldn’t say for sure. The details are lost to time – I can only say that at some point we started talking, and one day I told my husband that I had made a friend through the internet.

He looked at me warily, and reminded me that the girl I had been talking to, the one so full of moxie and so quick with the clever retorts, might have been an elaborate work of fiction. I kept this in mind when I found out she and her family were stopping through Seattle, and wanted to meet up for lunch.

“She might be a balding man named Herb,” I told myself. “He might think that Kate Hudson is a talented actress, and he might enjoy Stephen Colbert unironically. ” It might be an awkward, unmitigated disaster.

It was not. She was exactly who she claimed to be, and more.

By the end of the afternoon (one largely spent quoting Anchorman) I realized that I could no longer refer to her as “a girl I’ve been talking to online”, but simply started calling her “my friend Deanna.”

She’s recently moved across the planet from me. Though I’ve only met her once, though it really shouldn’t make a difference, this saddens me. I’d love to sit down, have a slice of cake with her, and laugh about how Weinergate is quiet possibly the best name for a sex scandal, ever. But since I can’t do that, I asked her to blog for me, and lovely girl that she is, she said yes. So enjoy today’s post. It was written by my friend, Deanna.

“We’re almost out of cheese,” my husband informed me the other night. While such a statement would usually cause only a passing moment of sadness in my gluttonous heart, his tone was not to be ignored.

“Can…we not buy more?” I inquired. Being a rather simple soul, I love little more than kicking back on a Friday night with a plate of bread and cheese.

“No, honey … I mean everything else at the cheese shop is made with unpasteurized milk. YOU’RE almost out of cheese.”

Now I had reason to be sad. You see, we left our previous home in glorious Hawaii for a three-year stint in North Yorkshire, England this past February. About a week after we left Hawaii I found out I was expecting our second child–and with our blessed event came all the dietary cautions and restrictions for ladies who find themselves up the spout.

This isn’t my first baby rodeo, but in Hawaii the temptations were mostly limited to sushi. I hadn’t put any thought into avoiding temptation in England until I was confronted with this sad reality: northern England is a fantasyland of beer and cheese. Goat’s milk, sheep’s milk, even buffalo milk cheeses can be found here, soft and pleasantly reeking and all one hundred percent on the “Do Not Eat!” list, and it goes without saying that anything alcoholic is a no-no. In a touch of denial, I played it a little fast and loose with the cheese and meat rules in the first weeks but as the days drew on my normal reluctance to tempt fate grew stronger than my desire for cheese (a strong desire indeed).
– 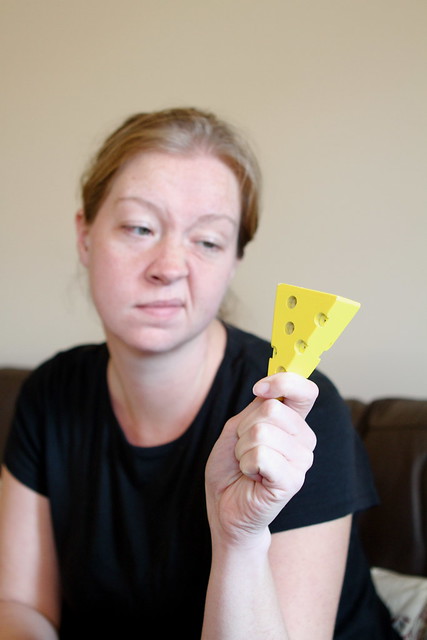 Even toy cheese mocks me.

Scrambling to the local cheese shop with the blessing of my midwife, I scoured every label for that beautiful, beautiful word: “Pasteurized.” We found many a glorious option: Ribblesdale goat cheese, Yorkshire-made blues, greenish Derby Sage and sweet Wensleydale. And cheddar, my God, the cheddar. But those options at our local cheeseboard did not sound as loud a siren as those pungent unpasteurized choices. Things like full-fat sheep’s milk cheese with “robust and peppery!” on the label and oh, all those locally made Bries.

Just as I was getting that craving under control, my husband embarked on a local beer-tasting project. I loved those deep inhalations from the lip of the beer glass, especially one from Wensleydale Brewery. Their Black Dub Oat Stout smelled like fresh snow, winter mornings with hot coffee, fireplaces, and cuddling with cocoa. It smelled magical. AND I COULDN’T HAVE ANY. Unlike Clinton and his ilk, I could only inhale this magical English elixir. I had to hand it back after consuming only the aroma.

To add insult to injury, we just booked a trip to Dublin–home of Guinness. And let us not even speak of the time I saw signs for the local Cider Fest. If I ever left my husband it would be for a bottle of Strongbow. Or Jon Hamm.  Either way I think he would understand. 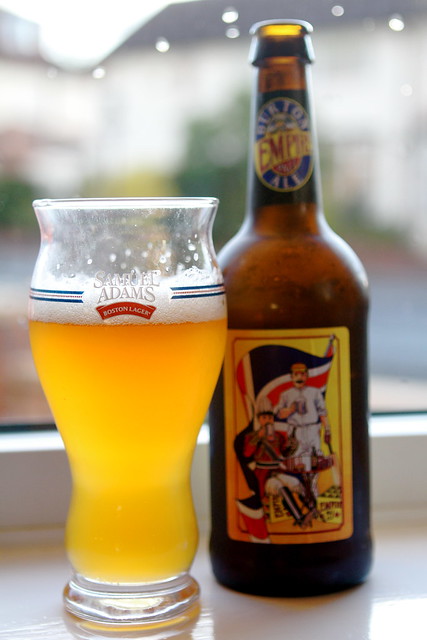 Because I am incredibly petty, I poured my husband's English beer in a Samuel Adams glass. I regret nothing.

I complain, but of course a healthy pregnancy is first on my mind. A healthy baby is the goal and there are practical considerations: as the full-time nose-wiper to our older child I don’t really have time to be laid out with a case of tummy troubles. But my day will come again. The once-forbidden cheeses and beers of England can be laid out before me without fear of anything more harsh than a bit of gas. So listen up, England: come Christmas we’ll be a traveling family of four and the restrictions are off.

And I have been a VERY good girl this year.

Deanna Niles McConnell is a mom, hausfrau and occasional writer who has called New England, the DC Metro area, Madrid, O’ahu, and Northern England home. Her thoughts on travel, parenthood, comma splices, and general navel-gazing can be found on her blog, Traveling Monkeys.