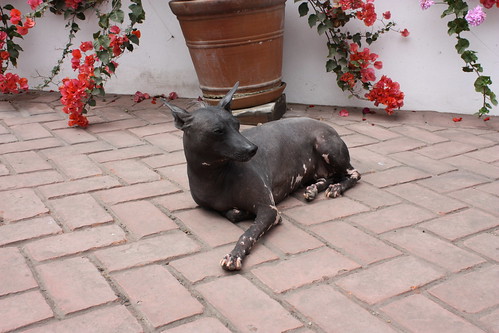 "Don't hate me because I'm hairless."

(Okay, fine – so today is actually Thursday, and not Wednesday. But I’m sure you’ll agree – “WTF Thursday” just doesn’t have the same ring to it. I’ve been on the road this week, and blogging’s been a little slow. Cut me a weensy bit of slack and I’ll love you forever.)

Allow me to say something which, though painfully obvious, we tend to lose sight of more often than not. Ready? Here goes:

I know, I know. This isn’t shocking news, right? You’ve probably been told this since you were a kid. But the more I watch television, and see countless tanned beauties with veneers (because at some point as a society, we started to think it was cool for people to have chiclets instead of teeth), shaking their glossy locks as they parade around in skin-tight jeans- AND YES I AM TALKING ABOUT BOTH MEN AND WOMEN – I begin to wonder if we’ve lost sight of this.

I’m so committed to proving there’s more to a person than their physical appearance, that I dedicate hours to making myself look disheveled. If you bump into me on the street, I may be, at any give time, rocking at least one of the following:

THIS LOOK REQUIRES HOURS OF PREPARATION, I SWEAR. It may appear as though I merely rolled out of bed and that my clothes were either slept in or stolen from someone in a significantly worse financial state than my own, but it’s all painstakingly put together. Such is my commitment to proving that there’s much more to us than our outward appearance.
But despite all of my efforts, the country of Peru puts me to shame. Because they have picked one homely son of a bitch to be their national dog.
The Perro sin pelo del Peru – literally, the Peruvian hairless dog – is, true to its name, almost entirely bald. We encountered one outside of the Larco Museum in Lima. Ebony-colored and smooth-skinned, it sat so perfectly still, we assumed it was made of stone (and that perhaps the museum had a really terrible decorator). It was only later, when we saw it sprawled on the ground by the entrance that we realized: this dog was real.

And poor thing – it was really, really ugly.
– 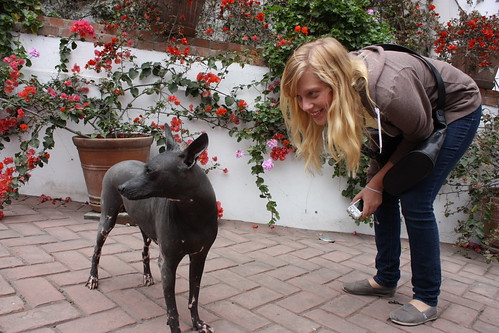 My travel buddy Meghan tries to get the hairless pup's attention.

It looked like the lovechild of a doberman and an old leather ottoman. As I got a closer look, I realized that the dog had the teeth of an NHL hockey player. This is common for the breed – apparently the same genes that cause the dogs to be hairless also leave them in want of a couple of molars. On top of all that, they’re prone to sunburns, acne, and clogged pores.

A while back, when the Obama family was shopping for a new dog, Claudia Galvez, president of the Association of Friends of Hairless Dogs of Peru (I am kind of dying with joy that such a thing exists) offered the first family a hairless dog. The offer was declined, because the Obamas are clearly superficial types who want the sort of dog that wouldn’t give their children nightmares.
– 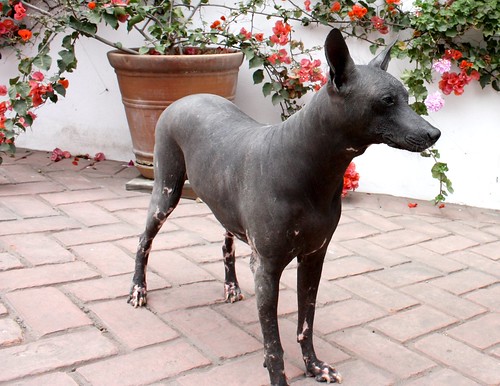 Beauty's in the eye of the beholder, right?

–
Fortunately, in its native country, the Peruvian hairless dog is appreciated much more. One of our tour guides smiled brightly as she told us about them – explaining that they resembled big, hairless bats. The breed has been around for literally thousands of years, dating back to Pre-Incan times. Though once nearly extinct, the Peruvian government has placed special protections on the animals, requiring every archaeological site on the coast to have at least two of them (which explains the one hanging around outside of the museum).

And despite their looks, they’re supposedly great pets – affectionate, intelligent, and, being hairless, allergy-free. According to folklore, being in contact with one of the dogs can help cure all sorts of maladies.

Given the number of twee poodles and designer dogs running around the planet, it’s hard not to respect Peru for their decision. Not only did they pick the hairless dog to be a symbol of their country, they’ve made sure it can be found in dozens of tourist destinations. It may be homely as hell, but its distinctly Peruvian.

It’s a sentiment that, if you think about it, is really … well, beautiful.