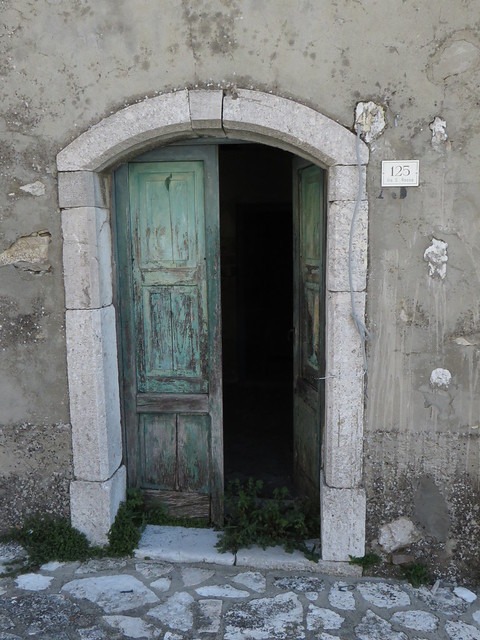 Not the green door we were looking for.

(I feel it pertinent to note that nearly half the doors in the village happened to also be green.)

Rand stared at me blankly. This is the extent of my sense of direction: a vague collection of observations, completely devoid of any useful landmarks or street names. It is the reason that I have little idea of where I am for most of my waking hours. 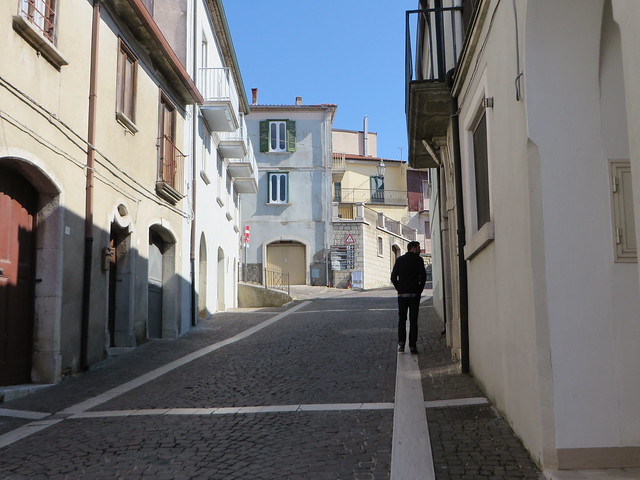 My husband, navigating the streets of my grandparents’ village.

But here’s the incredible part: in my grandparents’ village, this perpetually broken internal compass of mine? It actually works. It is entirely ill-suited for life outside this little corner of Southern Italy, but here, I know where I am going. 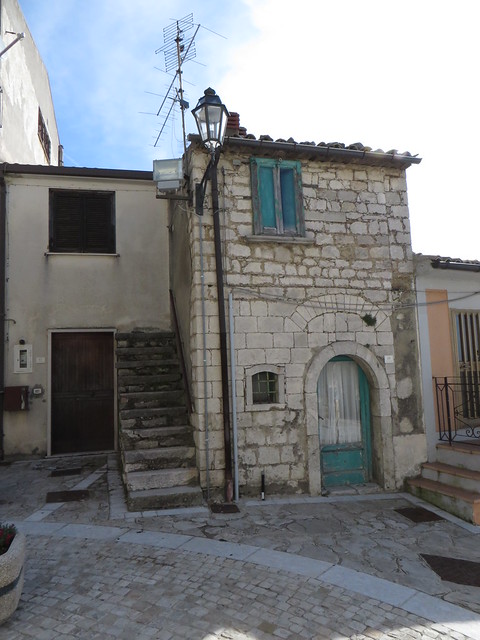 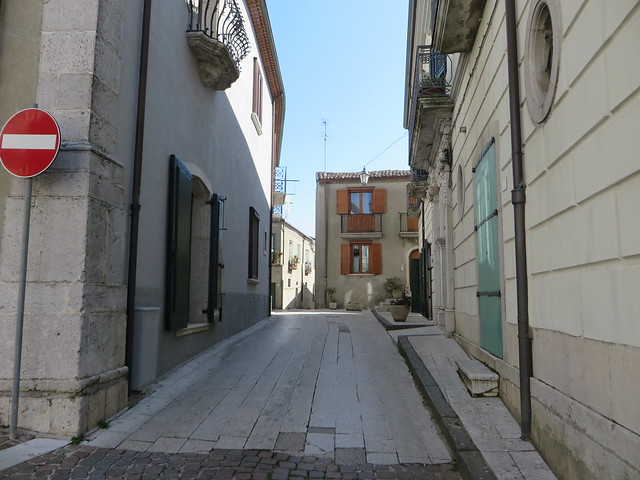 And another here, still.

I found the right door, and rather quickly. It was massive and (as I had remembered) bright green. A little open doorway was next to it, and I remembered this, too. That the green door was rarely used; the little doorway was always open. I walked through it, into a small courtyard lined with houses.

Rand followed me, a small measure of hesitation in his gait. I hadn’t announced that this was the right place. I’d just walked in.

“Is this it?” Rand asked. I nodded. Even the dog in the yard beyond was miraculously the same. It began barking furiously at the sight of us.

“Bella, zitta,” I snapped. I hadn’t yet realized that Bella had died years ago. Or that this dog was, in fact, male. (I was baffled by its agelessness, and my aunt later explained he was from a litter of Bella’s.)

I peeked into one of the windows and my mother’s first cousin beamed back at me.

Yes, yes, it was the right house.

Later, my aunt and uncle would arrive, with my cousin. My great-aunt would walk over from her home, which sat just across the tiny courtyard, next to the massive green door. 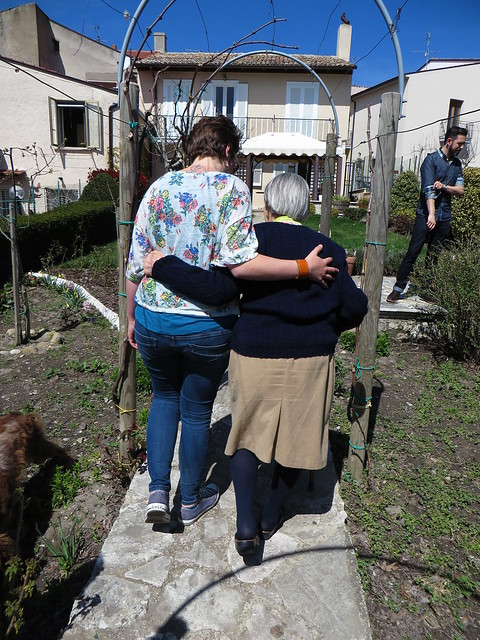 I adore this photo: my cousin Val, with my great-aunt.

We would sit in the sunshine, and eat truffle-flavored pecorino, and we’d catch up on life before pranzo.

I couldn’t tell you what street the house was on (Di Giovanni? Di Pietro?). I couldn’t give you directions on how to get there. But drop me off at the bottom of the hill of the village, and I will find it. 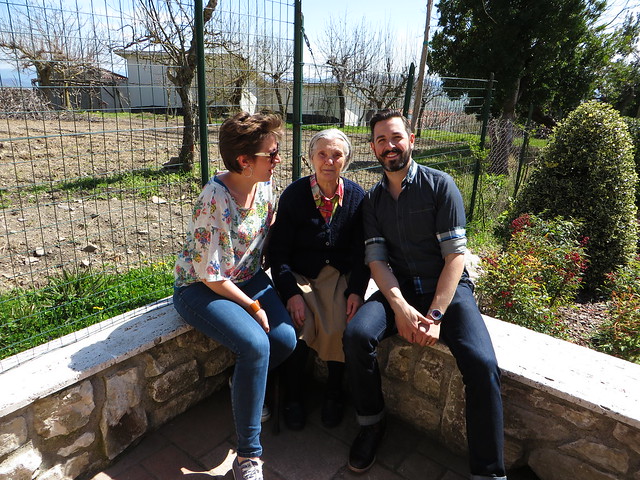 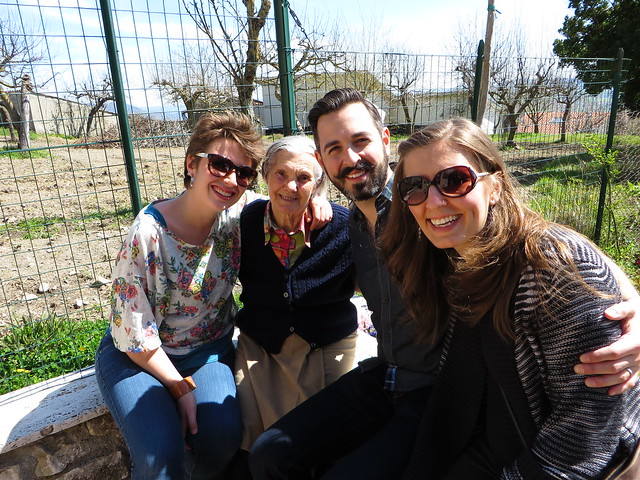 Around the corner from the house my grandfather bought (the one with no heat), and behind the massive green door. There, a seemingly-immortal dog will bark, and my aunt will smile brightly, and we will sit in the sunshine and talk about life, and it will absolutely be the place I was looking for. 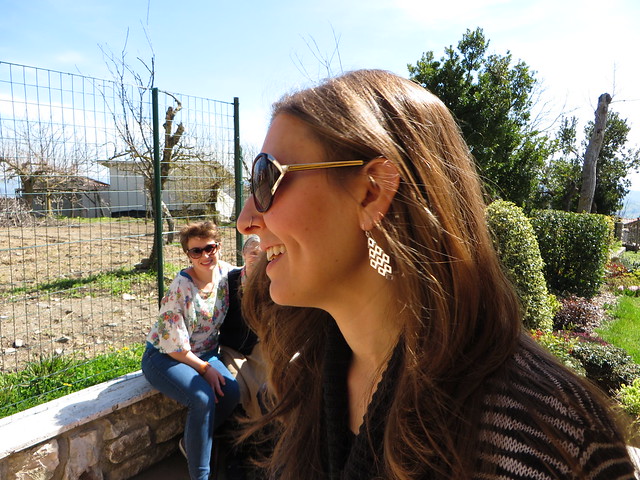