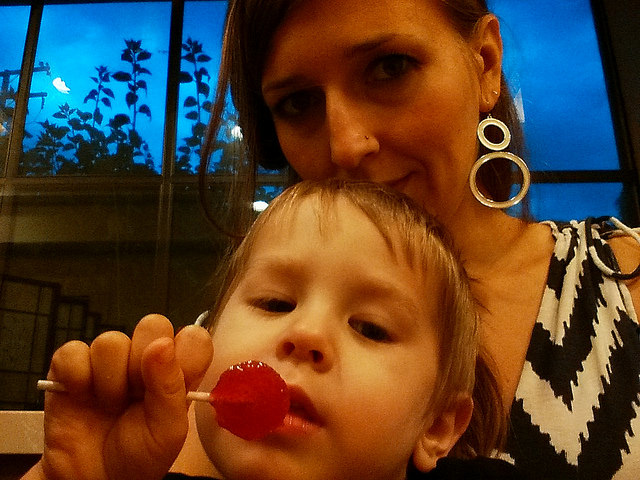 My alarm clock, I am sad to report, does not respond to screaming. 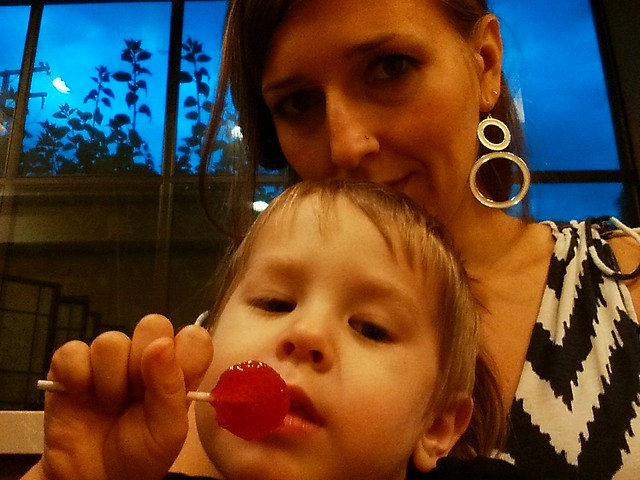 My husband already apparently knew this. I was a little surprised by it. For those of you who were unaware, let me state it for posterity: you cannot stop the passage of time by yelling at clocks, or calendars, or even people. Time will continue to march on, at exactly the same speed, regardless of what you do. It doesn’t care if you are bored, or sad, or feeling impatient, though it seems to notice (as the old adage goes) if you are having fun. Then it seems to race uncontrollably, and it won’t be until the next morning or the next year or the next decade that you have a chance to take a deep breath and wonder what day it is, and where all the time went.

This past weekend, I was in Los Angeles for three short days. L.A. is a good town in which to think about the passage of time, because people there are constantly doing things to make you think that they are impervious to it. They lie about their ages and pull and tone and stretch parts of their bodies so it looks like time doesn’t effect them.

As I drove from one spot to another (it is impossible to get anywhere in Southern California without a car, and so for the first time in my life, at the not-so-tender age of 34, I rented one on my own), I’d watch Google Maps’ estimated time of arrival increase as traffic got worse. I’d drive for 10 minutes, but my destination would remain 20 minutes away. It’s the closest I’ve come to time standing still.

And yet, despite the traffic and the sprawling nature of the city, I managed to see everyone I wanted to during that brief trip, which is a rarity for any visit, and particularly so for one lasting only the weekend.

I saw my friend Katie, who I’ve known, miraculously, for nearly a quarter of a century. We sat on her couch, took turns falling asleep while watching television, and we might have been thirteen again. Except the home was hers and not her parents’, and our glasses were filled with bourbon and not soda. But the conversation and the eye-rolling and our chosen entertainment (a show of dubious intellectual merit called T.Rex Autopsy on the National Geographic Channel) was directly out of 1994.

I spent the night at her house, in Katie’s double bed, and I awoke next morning confused by the strangeness of my surroundings and the familiarity of it all. Katie’s hair spread out on her pillow, a tan arm reaching towards me (totally infringing on my half of the bed); I’d seen it all countless times before, throughout our middle school years. Time had passed, but nothing had changed. 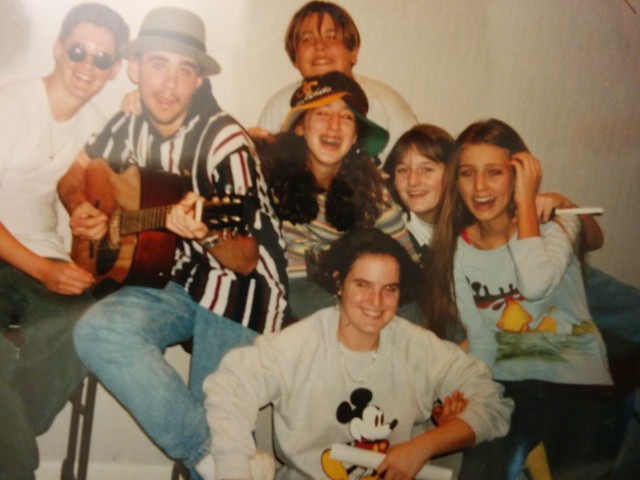 I found this at Katie’s house. She is inexplicably wearing two hats. Guess which one I am.

The next day was my nephew’s third birthday, and I crisscrossed town to see him, to scoop him up in my arms and marvel at his skinny legs and tiny tushie and his ability to hum the Imperial March perfectly. I think the poor kid has inherited my cheesy, crooked smile. 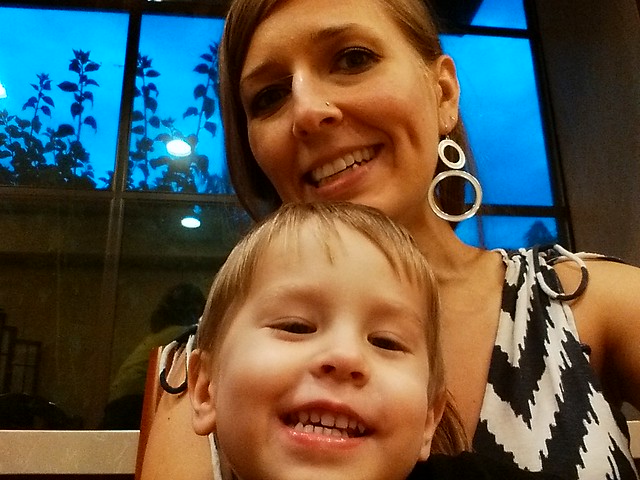 We’ve known each other for three years. The entirety of his life, a fraction of my own. But I have trouble imagining a time before him. 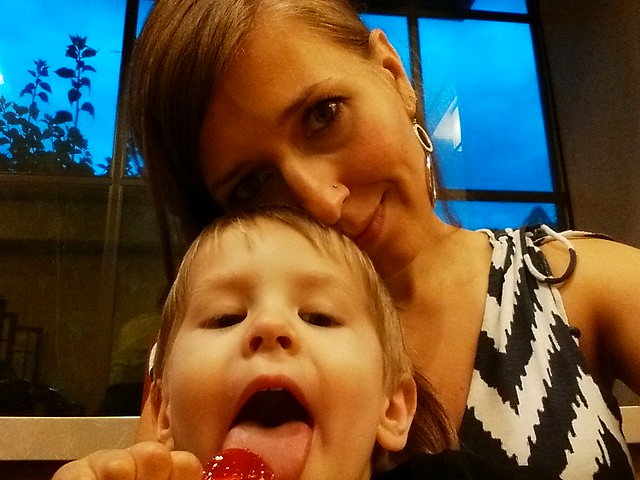 Auntie and nephew with lollipop.

I wonder if he will remember his third birthday. I remember mine, sitting alongside my brother, a cake in front of each of us (my mother, in a well-meaning but cringe-worthy act, decided to ignore the two-week separation between my and Edward’s birthdays, and celebrated them together for years – a joint party that left no one happy. And we wonder why he resents me).

And this weekend, I met Chad, my Cancerful friend of internet fame. Like, we hung out. In person. I went to see him late one night, crossing the city once more, this time inexplicably wracked with nerves. Chad and I started writing to one another after that strange year when we’d both had brain surgery (my first and only; his first of four). In that time, I’d created an impression of him in my head, built up who he was based on our emails and his writing and projects. And I was terrified that the impression I had was inaccurate, and I’d spent three years befriending a work of fiction.

I thought meeting Chad would be weird. It was not.

He was exactly the same in person as he was online, funny and sharp, making good on every promise he never made. And he might as well have the written the handbook on how not to freak out internet friends who you are meeting for the first time.

A few of the scenes from that night have already become indelible in my mind. Chad, sitting on his couch, eating a bowl of cereal (steroids make you ravenous), and saying to me, his mouth full, “I WANT TO MEET RAND.” Insisting I try chocolate sprinkles from a box that bore my last name, letting me steal puffs of his cigarette on his deck, and not giving me a hard time when I reached for the easy joke (“These things will give you cancer, you know.”)

Our attempts to take a photo where we didn’t look like goobers. 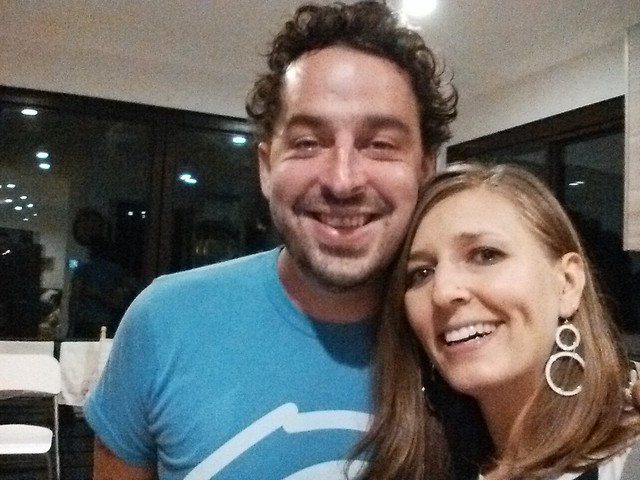 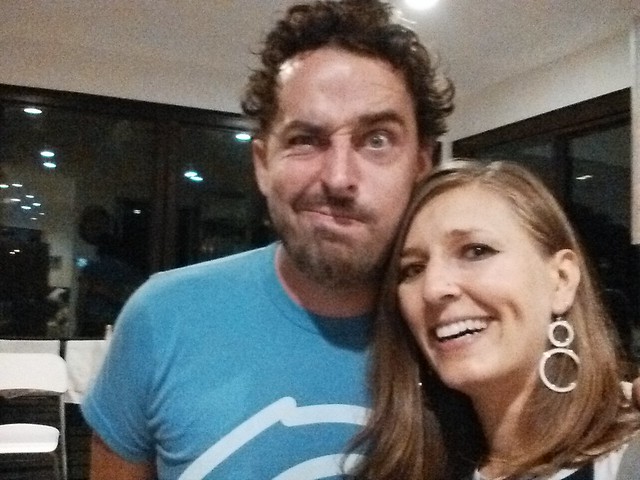 I think of this weekend, and of all the weekends that came before it. Of every voicemail I ever deleted that I wish I hadn’t. Every moment I wish I could replay, all the things I wish I’d said. Of Rand, sitting across from me at candlelit table nearly fourteen years ago, and me promising myself I wouldn’t kiss him. A resolution that I kept for the better part of two hours and have ignored ever since.

I spend so much time getting lost in the past, that I sometimes forget to marvel at the present. One where a lifetime of love adds up to only three years, where a quarter of a century can go by and nothing has changed. Where you can befriend someone you’ve never met.

I want things to stand still, just for a little while, so I can take it all in. I yell at my alarm clock. It ignores me, and ticks on.