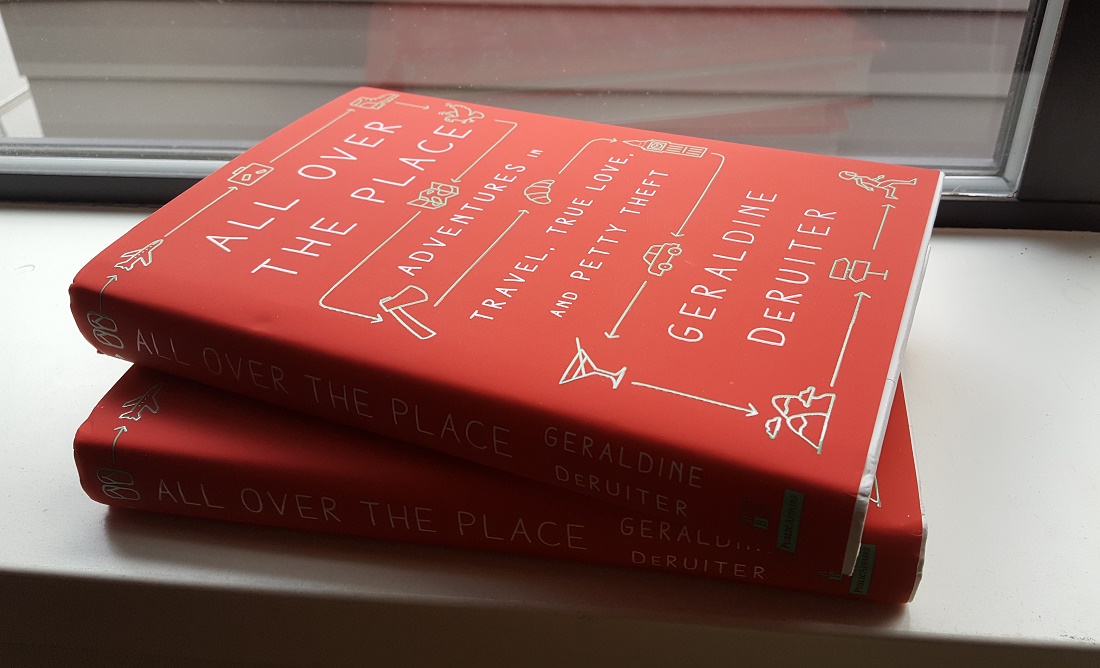 “What’s the hardest part about writing a book?”

I’ve been asked this question a lot lately, and my answer is what you’d expect: figuring out which darlings to fight for and which to cut, weaving a cohesive narrative, and finding an author bio photo of me that doesn’t have obscene words in the background.

You know, the usual.

What I did not anticipate, after my book was sold to a publisher, and after we finished the edits, was that actually telling people about my book would prove to be one of the hardest things I had to do. For the record, this should sound like utter bullshit. I mean, it sounds like utter bullshit to me. 11-year-old me has been waiting for this moment for COUGH COUGH years. And now we’re being sheepish about it? WHAT THE HELL, GERALDINE?

But as a whole Pandora station called “Geraldine’s Greatest Self-Disparaging Hits” plays in my head, this is what I find myself grappling with. Self-promotion is a very difficult task for me. I have to ask my friends and family and everyone in my social circle – people I love and respect and have peed next to in public bathrooms – to buy my book. I am asking them to spend time and money on me. And that act makes me profoundly uncomfortable.

While in Japan we struck up a conversation with a family from Chile. The father asked us what we did, and I quietly mumbled something about travel writing.

“That’s amazing!” he said, and wanted to know more. I shrugged my way through talking about the blog and stared at the ground like an awkward teenager.

“She’s also just finished a book,” Rand said, looking at me as though my omission was crazy.

“That’s not a big deal,” I mumbled about the realization of my childhood dream.

I have spent a lot of time trying to unpack why my reaction has been this way. Rand and I recently had a spat because he wanted to do some promotional work for my book. The problem with having a partner who is a digital marketer (YES, BELIEVE IT OR NOT THERE IS A DOWNSIDE. It’s not just sexy Google rankings talk all day) is that when you do something worth noting, they want to tell the world. I sat on our bed, tearfully begging him not to email anyone because they might feel obligated to buy my book or to help spread the word about the launch.

“Have you lost your mind?” Rand said. (The fight escalated to the point where I screamed, “YOU KNEW I WAS BAD AT SEO WHEN YOU MARRIED ME.”)

Rand’s support is so apparent, so evident, I started to wonder if there was something unusual about my near-pathological reluctance to promote my own work. I asked my friend Mike, who is a talented and award-winning children’s writer and illustrator, about his own struggles to be self-promotional.

“It definitely feels weird and icky sometimes … it feels awkward promoting one’s work, as if to say ‘Look how great I am!'”

All of that sounded like madness to me, frankly, because Mike. Is. Great. I kept asking around, and found that while Mike and a few other men I knew had discomfort promoting their work, it seemed like almost every single woman I knew did. So, like most people looking for social proof that they haven’t lost their mind, I asked on Twitter.

Question for women in my feed: do you have trouble promoting your work? Does it make you uncomfortable? Why? (I’m working on something)

And again and again, I heard the same response from women across professions (writers do not claim sole jurisdiction over this) – it is very difficult to sing your own praises. Heck, for many of us, it’s difficult to even mutter your own praises under your breath when no one is home. It feels rooted in the same misogyny that has so many of us second-guessing ourselves for promotions or recognition of any kind. There is a fundamental fear of being disliked, a belief that if we do promote our work we’ll be see as arrogant or opportunistic, demanding or difficult.

@everywhereist I have trouble promoting anything that is related to me…it’s the “I’m worthy enough” or even just “I’m worthy” that I struggle with.

Even those that did promote their work noted that they only shared an article once or twice – believing that there was a limit to how often to we could promote our own work before exhausting the goodwill of our social networks. A limit that we only seem to apply to ourselves. (Indeed, I’ve received this criticism from Rand as well – even when I share my work, I do so only once, and I don’t share everything I produce. I argue that I don’t want to annoy people – even as men and publications in my feed endlessly tweet out the same article again and again. The New Yorker keeps trying to make The Borowitz Report happen in my feed at least 5 times a day. I still follow them.)

Rachel Bloom’s brilliant “Lady Boss” video encompasses this duality – of trying to stand up for ourselves while still worrying about who we might offend in our quest to be valued and heard.

We float between believing in ourselves and being mired in self-doubt, often in the same breath.

@everywhereist YES! I go from feeling v capable to being wrecked by imposter syndrome about 4 times/day. I question every self-promotional thing I’ve said.

And for many of us, it’s the self-doubt that overtakes the conversation.

@everywhereist So I think mine is partially imposter syndrome: everyone is going to hate it, so why promote it?

I know both of these women. Naomi is a brilliant writer. Her voice is both poetic and direct, which is an amazingly tough thing to balance. Ashley is a damn rock star in her field. While I struggle with the lack of logic in their statements, I find myself applying the same flawed thinking to my own life.

“What if you are telling people to promote a book that isn’t any good?” I ask Rand, my voice cracking with panic.

He stares at me blankly for a beat. He pulls up my Goodreads reviews and points at it.

“Are you kidding me?” he says. “Look at these reviews. They. Are. Glowing. And these are from people who don’t know you. You’re worried about asking people who know and like you to buy your book?”

(Ugh. Yes, this happened. Two days later my friend Ronell wrote this beautiful post which made me cry. And yet I still worry about not being liked.)

Amazingly, I can be simultaneously disgusted with both my self-doubt and the thought-of self-promotion. For those of us who can’t quite break free of the idea that women shouldn’t laud our own achievements, we find ourselves in a lose-lose situation. In either case, we’re being insincere.

@everywhereist 100%
The same I have a hard time taking a
compliment from someone.
Feels like I might over sell,
when in reality I probably under sell! pic.twitter.com/gB27OFCcyY

We do not extend this dynamic to our male counterparts, I’ve found. As Jenét succinctly puts it, this is a judgement we hold against ourselves. To be self-promotional is to be at odds with being a woman.

@everywhereist @amywestervelt This is what we’re raised to believe. This is the crap that society shoves onto us. It’s not feminine. It’s not attractive. You’re bragging.

And when I find a woman who is able to promote and value her own work, I regard her like a unicorn.

@everywhereist No, I’m not uncomfortable promoting my work.

I emailed Jenét about this – and, okay, maybe I also asked her to be my Obi Wan. She told me that growing up, the emphasis emphasis was put on racial equality, not on gender equality. (She laughed and said that it was implied that women were as good as men).

“I got the standard ‘You’re just as good as white people but know you have to work twice as hard for it matter.'”

And as a kid, she already knew that she was intelligent, and tough, and different. For her, the only option was to embrace it.

Her email touched on something critical: it’s impossible to divorce this issue from other forms of oppression or marginalization. #intersectionalfeminism (Even Mike, my illustrator friend who struggles with lauding his own work, is neither straight nor white.)

In Phoebe Robinson’s brilliant You Can’t Touch My Hair, she discusses how she needs to self-censor so that she’s not perceived as “an angry black woman”. She notes that she used to dim her own light to make other people – most notably white people – more comfortable. For so many women, it isn’t simply misogyny that keeps them quiet, it’s institutionalized racism, or ablelism, or homophobia, or transphobia. In sharing our work, we make ourselves even more vulnerable than normal. In lauding ourselves, we worry how we’ll be perceived.

@everywhereist When I say “like me”, I mean as a woman and as an ethnic minority, I get the impression that people think I should not be assertive.

@everywhereist @randfish Yes, afraid that I’m not good enough. Have to channel my inner white dude for confidence.

Whether we manage to laud our own work or not, we all seem to be unified under one sentiment about seeing women stifle their own voices:

@everywhereist @amywestervelt It breaks my heart.

I have a lot of privilege at my disposal. I’m white, I’m able-bodied, I’m cis, and straight, and have a husband who is a frigging marketing juggernaut. My biggest obstacle is that I need to stop playing the soundtrack to Geraldine Sucks: The Musical, over and over in my head.  I thought about what Jenét told me in her email.

“I believe with my whole heart that every woman can and should be their own hype man. Women absolutely are allowed to be proud of their achievements and the products they create. Fuck anyone telling me or any woman that promoting ourselves is bragging. That it’s not feminine (code for unattractive) or classy. Fuck all of that! Closed mouths don’t get fed. The end.”

And I’m working on that. I share other women’s work. I sing their praises, even if they are too scared to sing their own. And I’m trying to be less uncomfortable about talking about my own work. I spent twenty minutes deciding whether or not to include this next paragraph. But here it is:

I wrote a book. It’s good. It really is. That is hard for me to say, not because it’s not the truth, but because I don’t want you to think I’m bragging. But whatever. I worked really hard on it and I’m proud of it, so I’m going to brag. You should buy it. It’s available on Amazon, Barnes & Noble, and Indiebound. I recorded the audiobook, too, because I’m multi-talented and bilingual. I speak four languages in the book with some pretty solid proficiency.

Here’s my husband dancing with a couple copies of it:

I hope you still like me after this grand display of non-self-loathing. If you don’t, well, I’m trying to be cool with that, too. Baby-steps, y’all. Baby steps.